The River Adur has its source in the South Downs, southern England and cuts its way through the soft chalk to its mouth at the port town of Shoreham-by-Sea.


The River Adur rises four miles south of Horsham and runs south-east skirting Coolham, Shipley and West Grinstead before meeting the eastern tributary midway between Ashurst to the west and Henfield to the east. The eastern tributary rises in two tributaries south of Haywards Heath, and south Hassocks that meet at Twineham. The River Adur reaches the sea at Shoreham-by-Sea where the mouth has been deflected two miles to the east by the longshore drift. Going upstream with the incoming tide through the centre of New Shoreham, the flood tide will flow under seven bridges before it reaches the village of Bramber after 6.4 km (4 miles). The river then passes about one mile east of the town of Steyning. The estuary is tidal for 17.9 km (11.1 miles) from the mouth to Bines Bridge on the B.2135. Ref. (link). The widest part of the estuary (excluding inlets) measured in a direct north-south line from the Bridge Hotel slipway (Norfolk Bridge) to Riverbank, Shoreham beach is approx 350 metres wide on a flood spring tide of 6 metres and above.

At low tide the River Adur cuts a narrow fast running channel through the mud flats in the middle of Shoreham-by-Sea as it rushes out to sea through the two long piers that mark the entrance to Shoreham Harbour.

The river is at its most interesting at mid-tide when half the mud flats are revealed. The mud flats become a roost for gulls and other birds, especially during the winter. Waders and birds on the mud include Ringed Plover, Dunlins and Lapwing, which are all commonly seen in the colder months.  Redshanks sound the first warning at the anticipation of danger. Boats and wooden posts are occupied by Cormorants fanning their wings after feeding on eels and flatfish.
Estuary Wildlife

Andy Horton presents an illustrated talk for children and another one for adults called a "A Portrait of the River Adur". Please enquire about talks and the  the presentation package for schools. 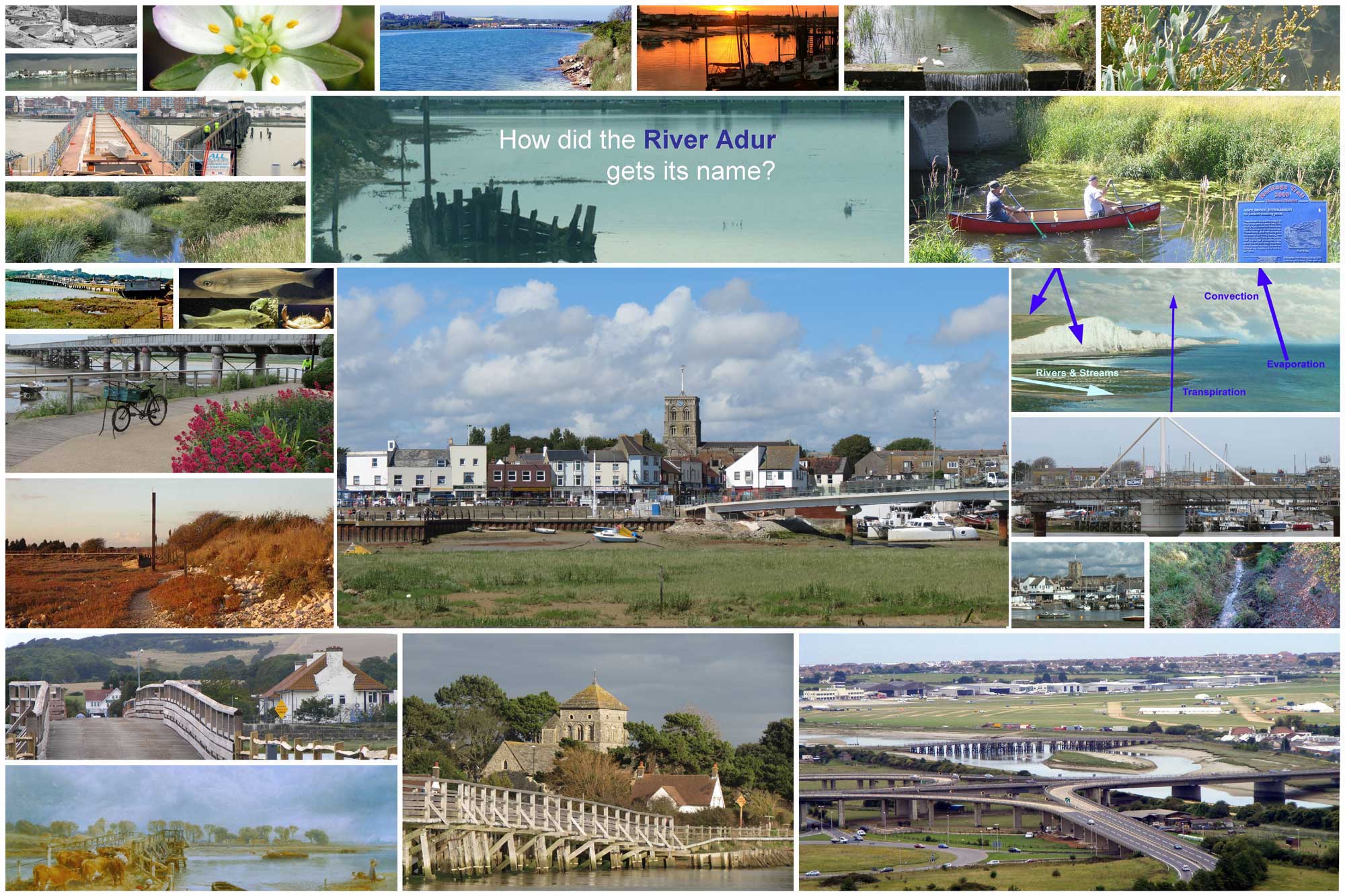 The river is build up on both sides through the low-lying flood plain and their are few marshes or wetlands aside the river. Flooding occurred at the beginning of the century at Bramber (notably in 1904) but this rarely occurs. There are pleasant walks on the towpaths on both sides of the river, from Shoreham-by-Sea to Bramber, with the passage passable for bicycles, if you can put up with lifting your bicycle over a few stiles. 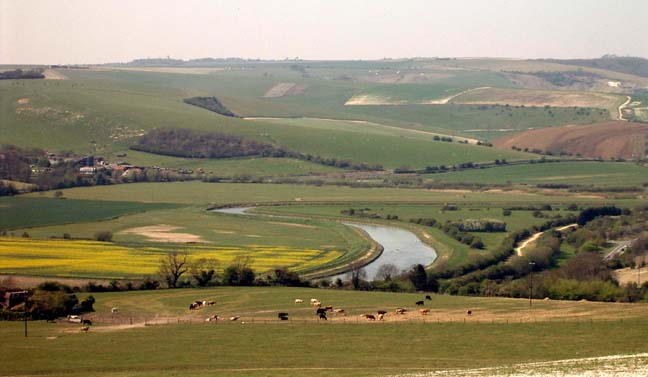 Patchwork landscape of the Adur Valley from Mill Hill 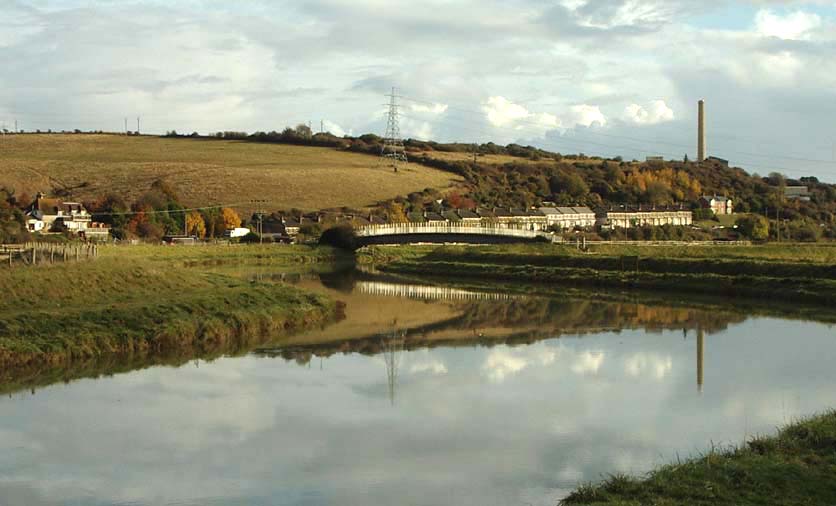 The River Adur at low tide, looking south-east towards the downs north of Mill Hill in the background.
The footbridge on the right in the photograph is the part of the South Downs Way after it descends steeply into the Adur Valley. This part of the river is between one and two miles north of Old Shoreham and the Toll Bridge.

The only large fish recorded as native to the fresh water part of the river is the Brown Trout. Coarse fish have been stocked, including fine specimens of Tench, Bream, Carp, Chub* and Rudd.  Flounders, Eels, Grey Mullet, Sand Smelt and Bass are present in the estuary during summer and autumn.

Chub released at * Tenchford Bridge (near Shipley) and Lock Farm (February 1999) western arm of the Adur.

The Sakeham catchment area for the east tributary covers 93.3 sq. km and runs through Weald clay where there is a rapid run-off for 54% of the precipitation, and to the north of the main run of the east river there is sandstone where there is natural water storage and the flow in the river is less affected by the immediate rainfall.

(It is not easy to explain the steepness of the eastern and western boundaries of the Adur Valley cutting through the South Downs north of Shoreham, although they may have been created by melt water during periglacial times).
Explanation (in the course of completion: at first draft stage)
Also, see  Devil's Dyke South Downs site  At about AD 965 the shoreline was different from the present. The River Adur was navigable as far upstream as Beeding or Bramber about four miles to the north of Old Shoreham. At the time of Edward the Confessor (1042-1066) ships could reach St. Cuthmans (Portus Cuthmanni) (Steyning),  a further mile north, which was a thriving port. The first bridge crossing at Bramber erected  at the time of Bramber Castle (now in ruins) about AD 1086 sometimes prevented  navigation further upstream (1103). A timber quay was erected at Bramber about this time (between AD 1010 and 1170).
Link to the Old River Course in Medieval Times


Origin of the name Adur

The name "Adur" arose from a mistake in interpretation of 5th century Roman documents for Portus Adurni, which was originally claimed to be in what is now the Adur estuary, but now thought to be at Portchester*. The name appeared in Michael Drayton's 'Polyolbion' in the 17th century (1612). (*other claims, but almost certainly not Shoreham or any other places on the current Adur.)

The river has also been known as the Sore (Holinshed's Chronicle 1577). This is likely to be because of back-formation. Back-formation is the reverse of affixation, being the analogical creation of a new word from an existing word falsely assumed to be its derivative. (i.e. Sore arose after the name Shoreham and not the other way round).
In late Saxon times the river was known as be eastern bremre, ofer bremre 956 (Bramber).
Toponymy:  Shoreham-by-Sea and Adur

Important Places in the Adur Valley: 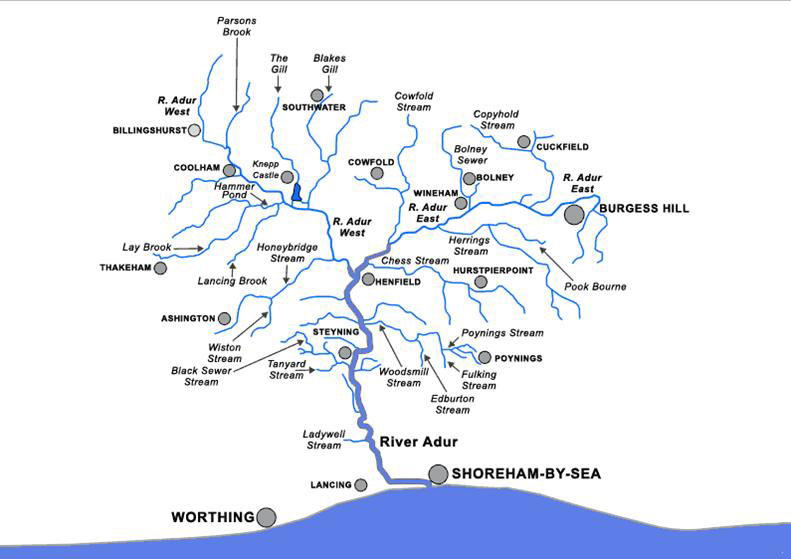 If you do not receive a reply or acknowledgement to an EMail within four weeks, please write again 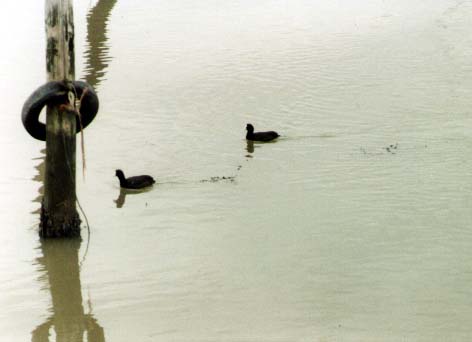