Adur Bees, Wasps & Sawflies etc.
excluding Bumblebees
Link to Bees etc. 2009
If IDs are not confirmed, do not quote please
17 May 2009
22 April 2009
Three kleptoparastic (cuckoo) bees Nomada fucata were spotted in the morning, the first skulking amongst the Alexanders at the top of Buckingham Park, the second in the Mill Hill Cutting (south west) and the third on the lower slopes of Mill Hill.
Nomada fucata Information

11 February 2008
I was surprised by my first Honey Bee of the year on the southern bank of the Mill Hill Cutting at the western end. It looked big enough to be a Queen.
Honey Bees on Wikipedia

At the northern end of the lower slopes of Mill Hill, near the Devil's Foot Scabious, I was attacked by a swarm of twenty or so Common Wasps* and despite making a run for it, I was stung at least six times mainly on my scalp and the stings could be felt four hours afterwards. It felt like a very strong nettle sting with a mild location specific headache after four hours had elapsed. My skin did not appear to have been broken, but because it was under my hair on the back of my head, I could not see this. There did not appear to be any swelling. (*I did not stay around to ascertain the precise species.) Later, two days later, I discovered a pin-prick mark around my left sideburns near the ear and another one on my cheek which were wasp stings and both of these were remembered as were two on my scalp which could not be seen.
4 July 2007
A solitary digger wasp in the genus Ectemnius was seen in the north-west part of Mill Hill. These wasps are predators on large flies.
10 June 2007
A Leaf Cutter Bee, Megachile sp. rested on the wooden hand rail in the Butterfly Copse next to the Waterworks Road.
27 April 2007 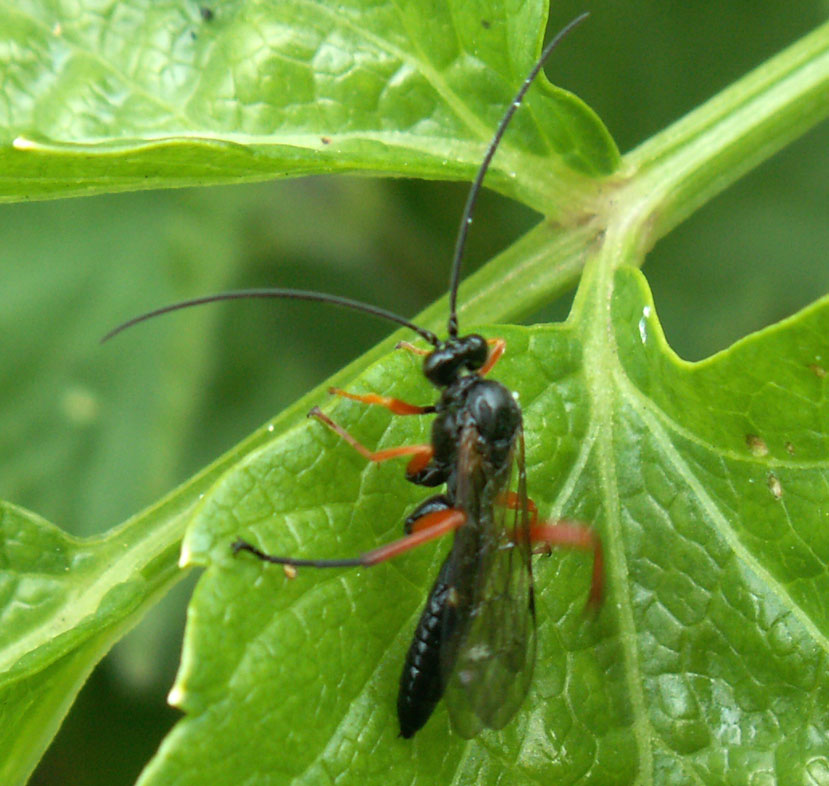 An ichneumon wasp was recorded from the Pixie Path to Mill Hill.  From Chinery I think it could be Pimpla instigator but it has not been confirmed.
Mapmate Ichneumonidae Checklist
Ichneumonidae (Wikipedia)
24 April 2007
A Nomada kleptoparastic (cuckoo) bee was recorded at Cuckoo's Corner. It was skulking and hiding too much to get a photograph.
16 April 2007
Brown female Spring (Hairy-footed) Flower Bees, Anthophora plumipes, buzzed noisily in the sunshine. I only saw one, but others were reported from the lower slopes of Mill Hill.


14 April 2007
Three Red Mason Bees, Osmia rufa, visited my garden in residential Shoreham. They seemed to be attracted to the Garden Privet.

5 April 2007
This wasp was just the one on Alexanders on the Public Footpath 3138 section of the Waterworks Road south. It is a Queen of the Common Wasp, Vespula vulgaris.
24 March 2007
An interesting orangey coloured Andrena bee briefly visited the flowering Rosemary by the front door of the Hamblett's south Lancing (TQ 186 044) front garden. This was similar to the bee seen on Mill Hill three days previously.
Adur Solitary Bees

21 March 2007
An interesting orangey Andrena bee entered a small hole in a small earth bank on the lower slopes of Mill Hill. It did not come out of the hole so I could not identify what species of bee it was. My best guess would be Andrena flavipes. However, the one seen may be a slightly larger species?

30 July 2006
A Leaf Cutter Bee, Megachile sp. was seen on the south part of Slonk Hill in tall vegetation next to the path.

23 July 2006
The first one, a sawfly, was spotted, probably on Cow Parsley on south side of the Buckingham Cutting.
The second sawfly was seen on Yarrow on the top meadows of Mill Hill.
They may be the same species. Tenthredo arcuata is my suggestion. If it is this species, the adult preys on small flies.

29 June 2006
A species of wasp was discovered near the Butterfly Copse next to the Waterworks Road.

A hoverfly and a wasp are shown next to each other to contrast or compare their appearances.
The wasp looks like one of the Digger Wasps illustrated on Chinery "British Insects" on page 237.

10 May 2006
A Spring (Hairy-footed) Flower Bee with a long tongue buzzed around the flowering Rosemary in my front garden.

The two bees photographed above (on the right) were seen in a north Shoreham garden. I think the first one is a Red Mason Bee, Osmia rufa, and the second one is a Leaf Cutter Bee, Megachile sp. The orange bee was a keen visitor to Bluebells.

3 May 2006
A Hornet, Vespa crabo, (illustrated above) visited my garden pond in south Lancing for a drink. This large wasp is uncommon and probably unwelcome.  It has a reputation to possess a powerful sting.

Report and Photograph by Ray Hamblett on flickr &
on the Bees, Wasps and Ants Recording Society (Yahoo Group)
Queen Vespula 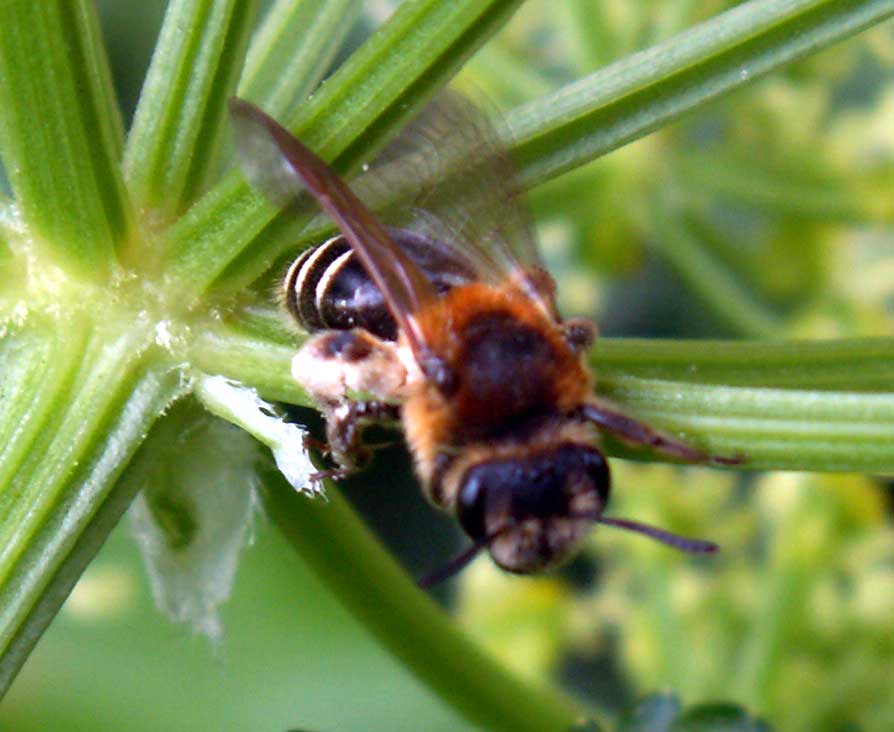 One Alexander at the top of the Butterfly Copse next to the Waterworks Road was visited by a small bee Andrena dorsata.
Solitary Bee Portraits

May came in with a shower. On the lower slopes of Mill Hill, small bees visited the Dandelions and there were scores of these and I think the species is Lasioglossum calceatum.
26 April 2006
The first record this year of the Spring (Hairy-footed) Flower Bee, Anthophora plumipes  buzzed around a north Shoreham garden. It seemed to be attracted to Spotted Deadnettle, Lamium maculatum (pic). It was seen again about two days later in the same garden. 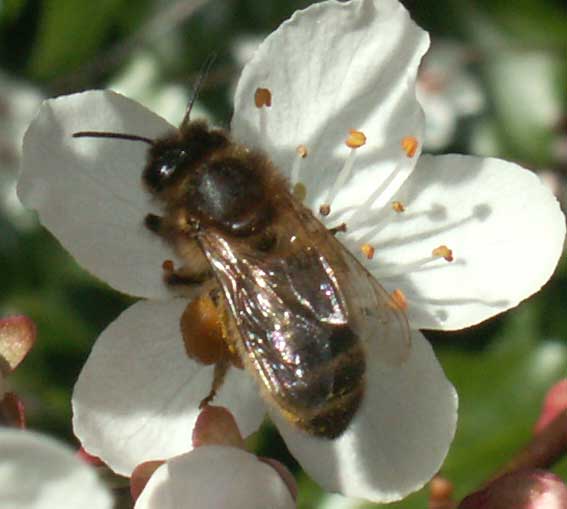 9 April 2006
At the top of the Butterfly Copse (Old Shoreham next to the Waterworks Road), a flowering Cherry Plum Tree attracted scores of Andrena bees, altogether at least one hundred and most of them amongst the flowers high in the tree and out of camera range.  This one was probably Andrena flavipes; it seems to match the photographs, and it is a common species at this time of the year. The problem is about half a dozen of the Andrena look almost identical without examination under a microscope.  A species of Andrena bee is the host for the larvae of the attractive and rare Dotted Bee-fly.
The only thing of note on the lower slopes of Mill Hill was one of small Lasioglossum bees on a solitary Dandelion. It was the same one as illustrated below.
British Insects:  Hymenoptera, Andrenidae


6 February 2006
The first Honey Bee recorded this year was photographed on the Lancing Ring Nature Reserve.

10 May 2005
There were at least five of the kleptoparastic (cuckoo) bees Nomada fucata in two minutes but only one of its victim the mining bee Andrena flavipes seen amongst the Elm leaves in the centre of New Monks Farm.

The first one is a Nomada kleptoparastic (cuckoo) bee.
The photograph on the far right is an Andrena Mining Bee.

The bee in the first two pictures is Nomada fucata, a parasite of the mining bee Andrena flavipes (and only parasitic on this species) in the photograph on the right which was discovered within a metre of the first bee. (TQ 188 049)  Nomada fucata is now widely recorded from southern England.
The Nomada bee was first spotted by Ray Hamblett.

ID confirmed to genus level and identified to specific level by Matt Smith
on the Bees, Wasps and Ants Recording Society Yahoo Group
There are unconfirmed earlier observations of Nomada fucata from the Pixie Path and the lower slopes of Mill Hill.

The method of kleptoparasiticism is that the parasitic Nomada bees lay their eggs into the nest cells of their Andrena hosts.
Brief Extra Information

1 May 2005
An Andrena bee was noted on a Dandelion in the copse at the top of Mill Hill. This a common genus of bees seen in many wild locations at this time of the year.

17 April 2005
The Spring (Hairy-footed) Flower Bee* with a long tongue and a loud buzzing sound in a Shoreham garden, was misidentified as a bee-fly at first. It was not a fly at all, but a solitary bee called Anthophora plumipes. It is a female (they are black) and the males are brown. The straightforward conclusion is the intruder with which it appeared to be fighting was the male of the same species and they were mating.

10 April 2005
There was what looked like an Andrena Mining Bee (illustrated below), probably Andrena flavipes, on yellow flowers of Oil Seed Rape on the south-facing A27 road embankment north of the Dovecote Estate, Shoreham. In the first picture (below), there are Pollen Beetles, Meligethes and a Black Ant of an unknown genus.

This insect photographed above on a Dandelion at the top of The Drive, Shoreham looks familiar, but it does not seem to have been photographed before.

Note the slender "waist" though. It was not seen hovering. This is a Mining Bee? Andrena ?

Certainly not a hoverfly, it has two pairs of wings. I printed off a copy and used a magnifying glass, looked at the wing venation [using Willmer] 3 SM cells; BV straight; D1 rhomboid; SM2 < SM3; hairy, brownish; the rest difficult to see but heading for Andrena sp.   However, look at the abdominal segment nearest the "waist" - I don't have a completely sharp pic - but I think I can
see something protruding from between the segments at the left hand side?  What do you think? Considering that the lethargic bee I found on a dandelion flower [mine was identified by Stuart Roberts as Andrena chrysosceles] was parasitised by 3 x female Stylops, it looks v. similar to your bee.
Andrena shortlist

There are over 200 species of solitary bees found in Britain and, like the social bees (the bumblebees and the honey bee), they all feed on pollen and nectar and they are important pollinators of many garden flowers and commercial crops. Solitary bees have no 'workers' and each female builds only a small nest, which she stocks with a large quantity of pollen - enough to provide all the food needed by her future offspring. After laying her eggs, the female bee seals and abandons the nest and soon dies, leaving her offspring to develop on their own.