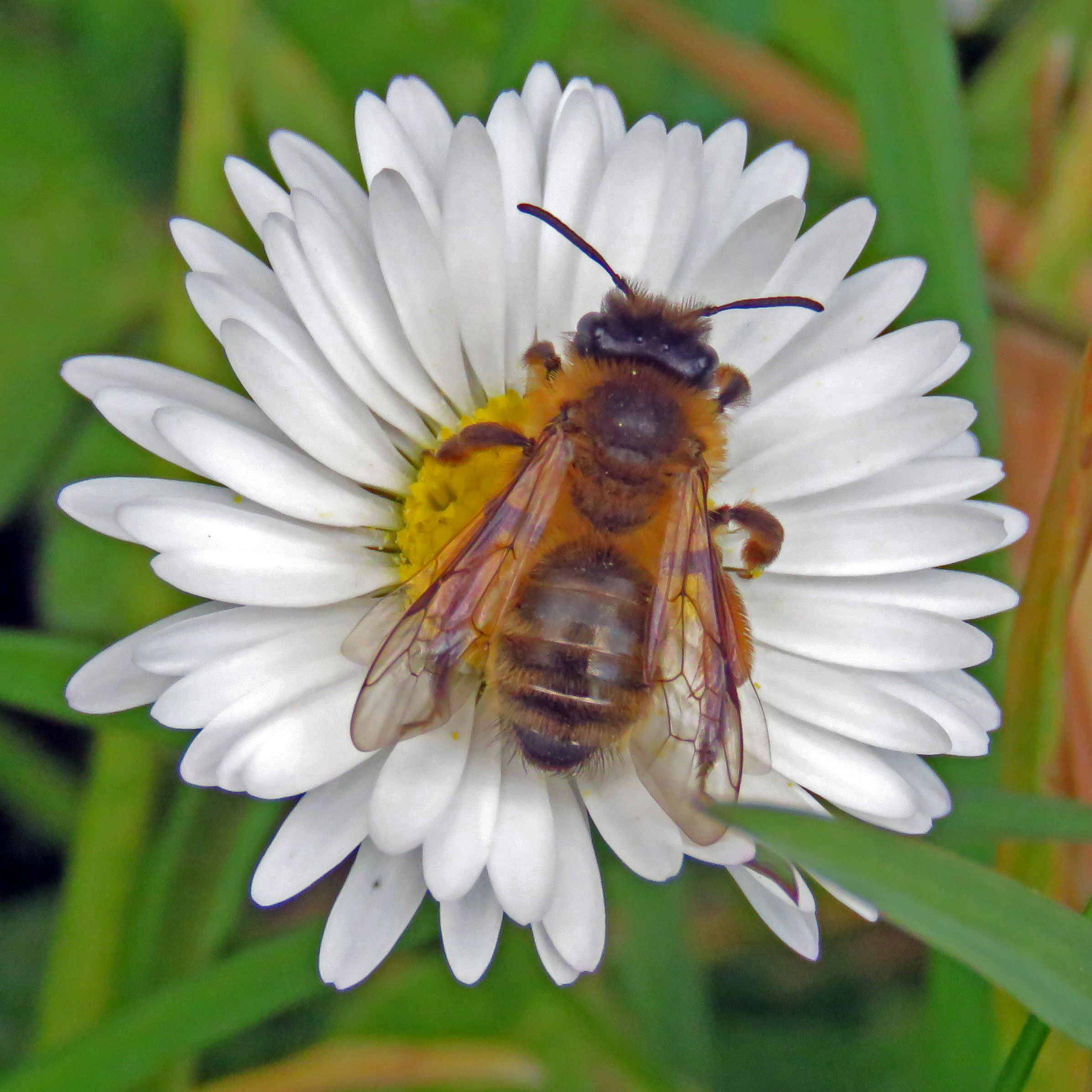 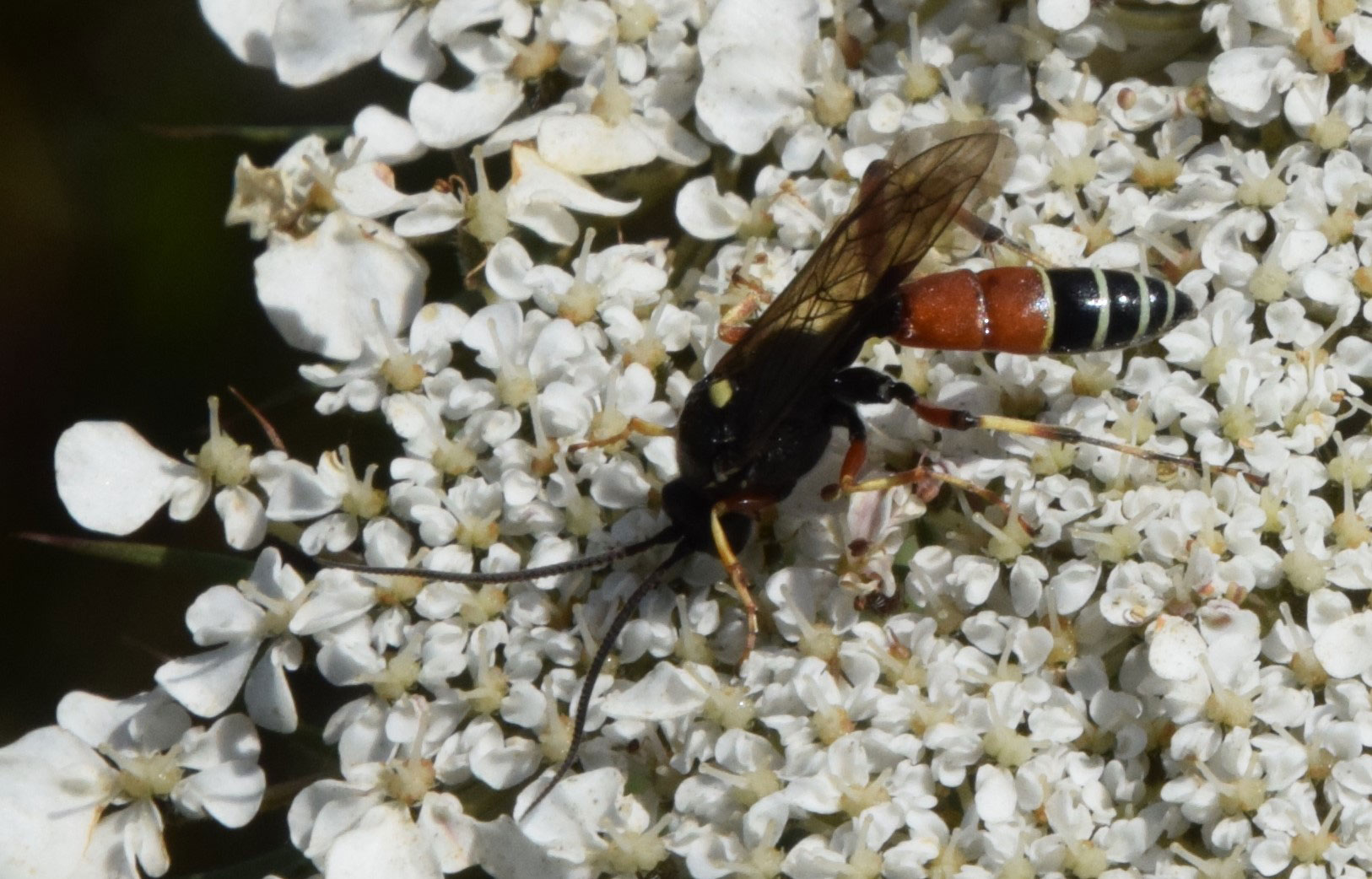 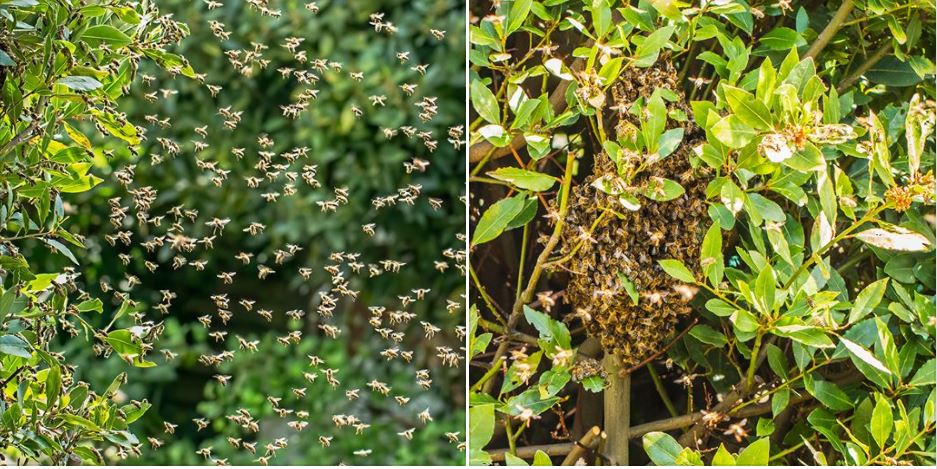 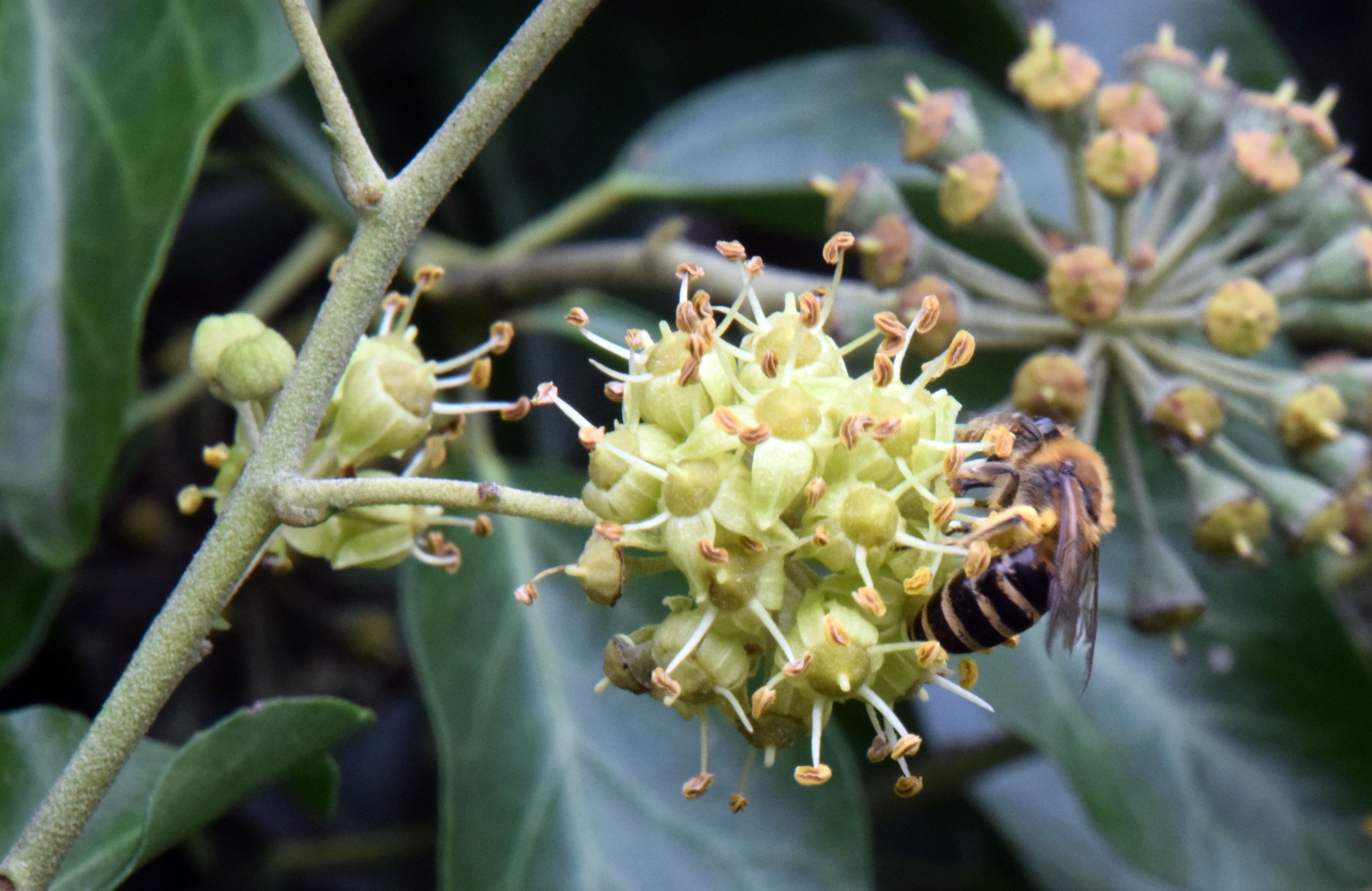 Ivy Bees were seen on the Ivy

After a week of inclement weather, there were no butterflies seen in the breeze on a brief visit to the lower slopes of Mill Hill. Occasional Ivy Bees were seen on the Ivy amongst the scrub.

20 September 2019
There were scores of Ivy Bees, Colletes hederae, where the soil was exposed on the lower slopes of Mill Hill

16 September 2019
There was over a dozen nests and scores of Ivy Bees, Colletes hederae, where the soil was exposed on the west facing (TQ 20960 07373) lower slopes of Mill Hill in the afternoon. Ivy was seen in flower as I returned by the uneventful ridge route in humid conditions.
Ivy Bee National Records 2019


Some identifications are questionable, beware. 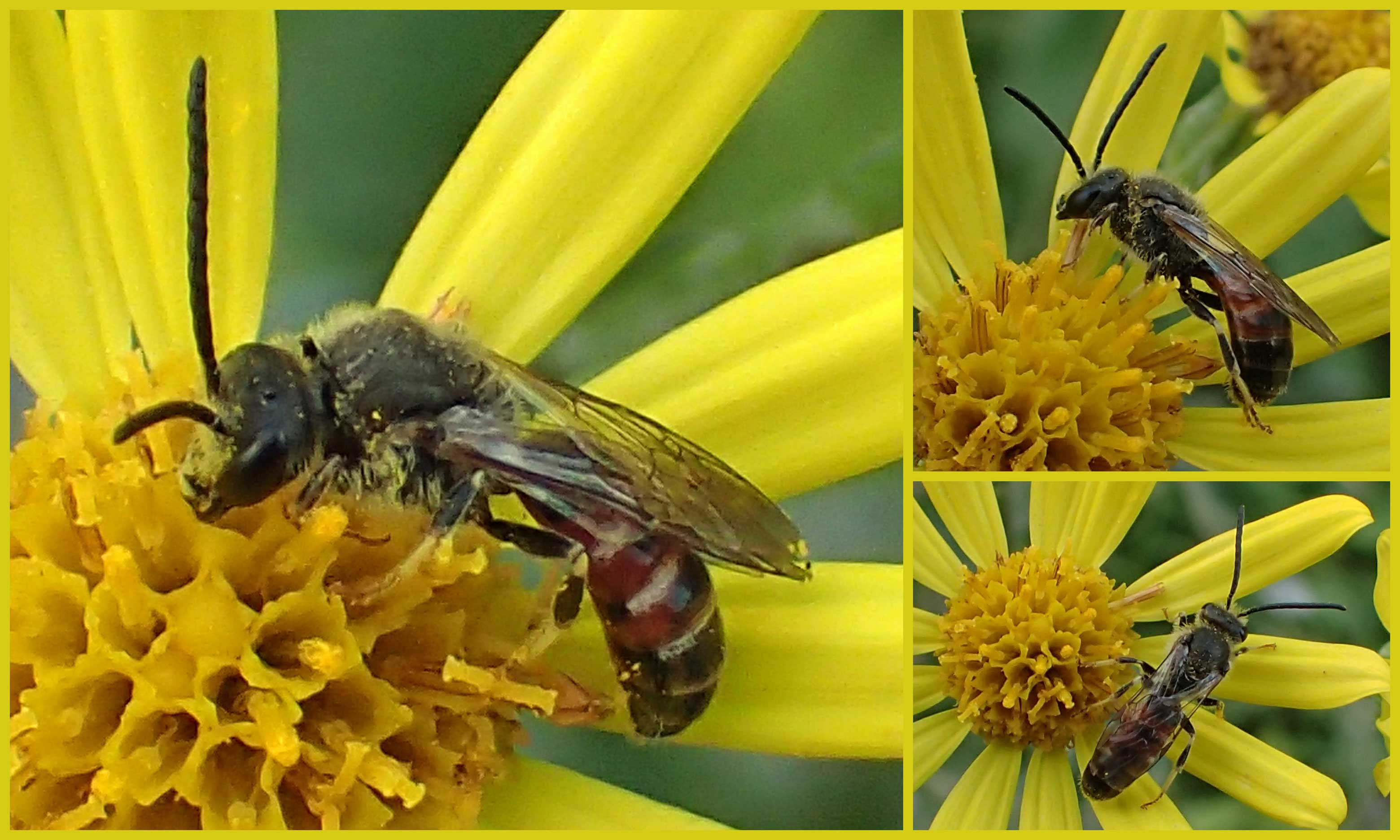 Small bee on Hoary Ragwort on the Downs Link Cyclepath

Stephen Boulton:  or Lasioglosum albipes, I don't think they can be separated by photo ID.

The bee on the left was thought to be an Andrena. Species ID was not possible.
The small wasp on the right is the predatory species Cerceris rybyensis. Its prey is small bees which it paralyses with its sting. This is is my first record although the wasp looks familiar.
ID of the wasp by Stephen Boulton on Insects of Britain and Northern Europe
on facebook
2015 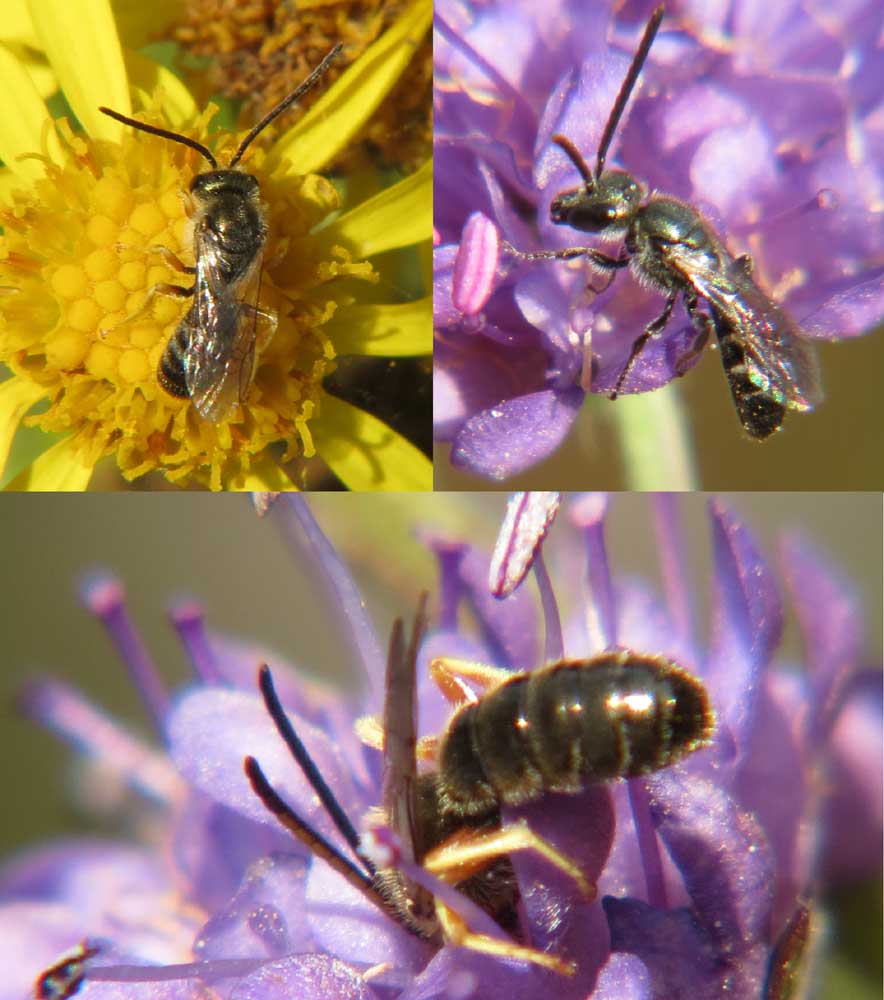 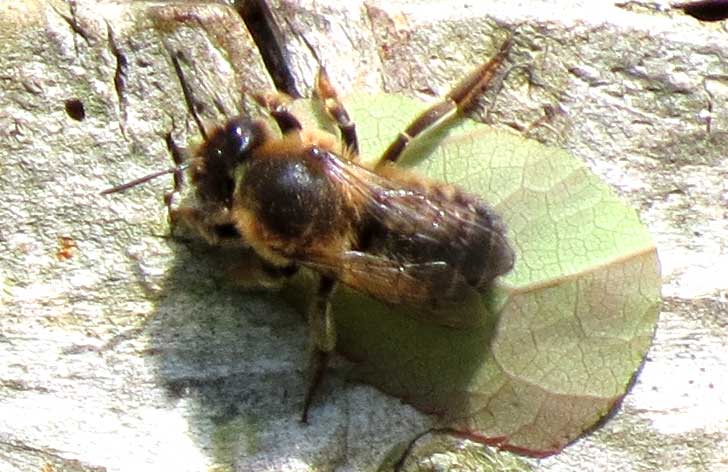 A Leafcutter Bee carefully selected Rose leaves and then cut them up and carried them away in Ray Hamblett's south Lancing garden. The whole process of cutting took about ten seconds.

3 November 2010
Three medium-sized Yellow-footed Solitary Bees, Lasioglossum xanthopum, visited the flowers of the Musk Thistles on a cleared patch on the lower slopes of Mill Hill above the path.
Adur Solitary Bees

21 June 2009
On a breezy mostly overcast day the most interesting observation were twenty or more small bees on the flower heads of the Musk Thistle on the side of the path as it runs past the Reservoir on the southern part of Mill Hill.

17 May 2009
22 April 2009
Three kleptoparastic (cuckoo) bees Nomada fucata were spotted in the morning, the first skulking amongst the Alexanders at the top of Buckingham Park, the second in the Mill Hill Cutting (south west) and the third on the lower slopes of Mill Hill.
Nomada fucata Information