This is a miscellaneous selection rather than a representative sample. Beetles were only recorded as incidentals or because they were large and noticeable. Ladybirds have their own page.

18 May 2006
The first very small Thick-legged Flower Beetle, Oedemera nobilis, of the year was seen on a Bulbous Buttercup on the Slonk Hill Cutting (south bank).

9 April 2006
The beetles Paederus littoralis were still present under the discarded Chestnut fencing on the Pixie Path. 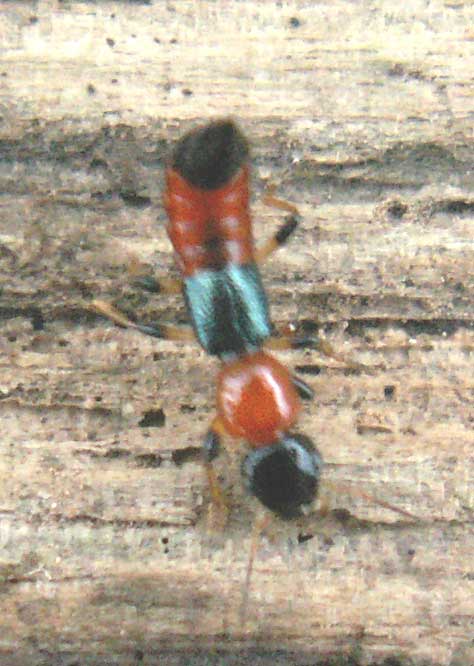 18 January 2006
Under the discarded Chestnut fencing on the Pixie Path, most of the dozen wood lice and a few spiders scampered off too quickly for the camera. One colourful Rove Beetle (Staphylinida) was slower and is shown on the left. There were three or four of these flightless beetles known as Paederus littoralis. The book (Chinery) says that this beetle is to be found in damp places. The specific name rather indicates the shore. These beetles contain a fluid called paederin which can cause the skin to peel and is more serious if it comes into contact with your eyes. There are examples of serious dermatitis caused by this substance (Beetle Juice). The front of the abdomen is called the elytra.

The identification has not been confirmed, but it seems probable. The British species of the same genus are:

This is a hardy species and one specimen has survived 22 days to 2 March 2006 in an airtight container (35mm film capsule) without food or water.

Theis larva was discovered in the Hawthorn wood/scrub in the north-west of Mill Hill. The multiple-legged insect, a larva (not a centipede), was crawling towards the right of the photograph. It seems to have eleven segments. It was crawling over the path between the northern end of the lower slopes and the stile. It may be a beetle larva. It estimated length is 25 mm. This may be the larva of Drilus flavescens, which is frequent on the downs in southern coastal areas.

I think this must be a Drilus larva. It looks just like the diagram in Westwood's book. (Richard Jones)

A female Stag Beetle, Lucanus cervus, was spotted crawling slowly across the pavement outside Lidls store in Worthing next to a busy road. As it was in imminent danger of being squashed, it was transferred to a garden in Lancing. 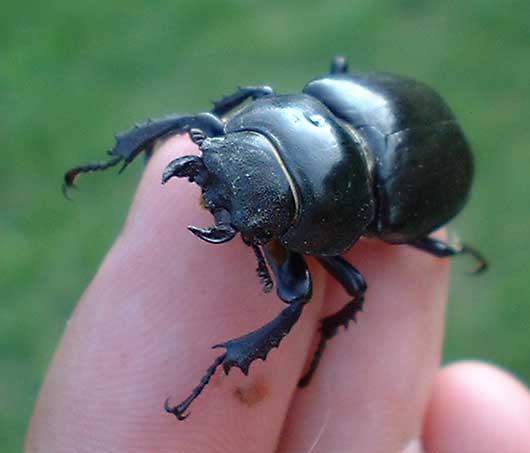 9 June 2003
The Stag Beetles were active at dusk flying over my south Lancing garden (TQ 186 044). One of them was chased by a Blackbird.