A cloudy breezy day after overnight rain is not a prime time to visit Mill Hill.  About ten 6-spotted Burnet Moths were seen by looking at the Greater Knapweed, and if I looked more diligently, I am sure I would have found many more. There was a mating pair amongst the long grass. 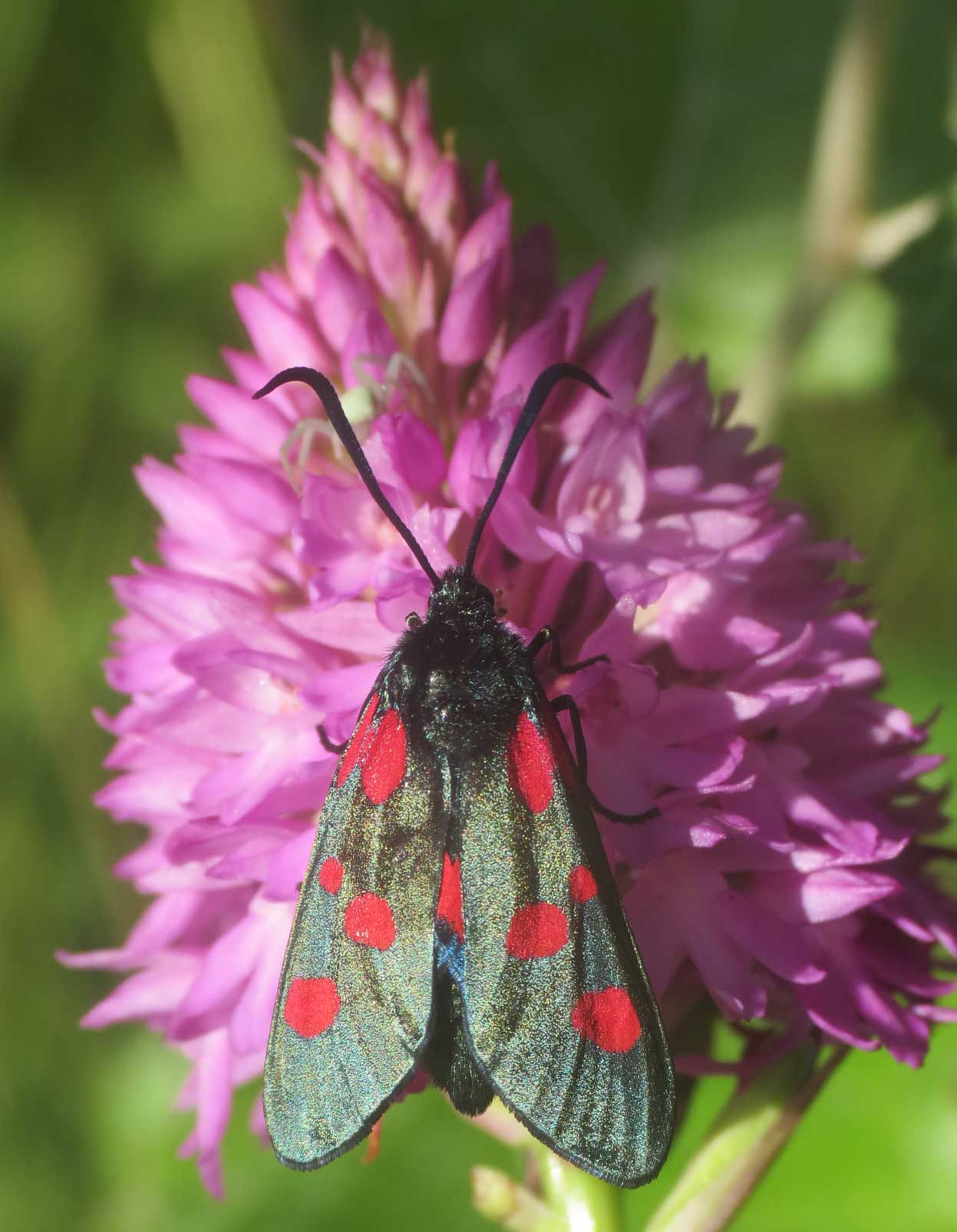 9 July 2013
Another warm day (24.9 °C) and the butterflies were both frequent and restless in the sunshine. Near Annington Sewer, a Narrow-bordered Five-spot Burnet Moth visited a Pyramidal Orchid.
Full Butterfly Report

7 July 2013
In the warmth (25.9 °C) of the midday sun, my first Meadow Brown Butterflies of the year, with the first day-flying Narrow-bordered Five-spot Burnet Moth and probably the first Ringlet Butterfly were seen over the verges of the Downs Link Cyclepath 100 metres south of the Cement Works.

29 June 2009
On the Adur Levels, in a field north of Cuckoo's Corner, a few Narrow-bordered Five-spot Burnet Moths, Zygaena lonicerae, visited Tufted Vetch, for the first record in 2009.

12 June 2009
My first of the year Six-spotted Burnet Moth was one of two on Creeping Thistle at the back of Dacre Gardens next to Anchor Bottom, Upper Beeding. 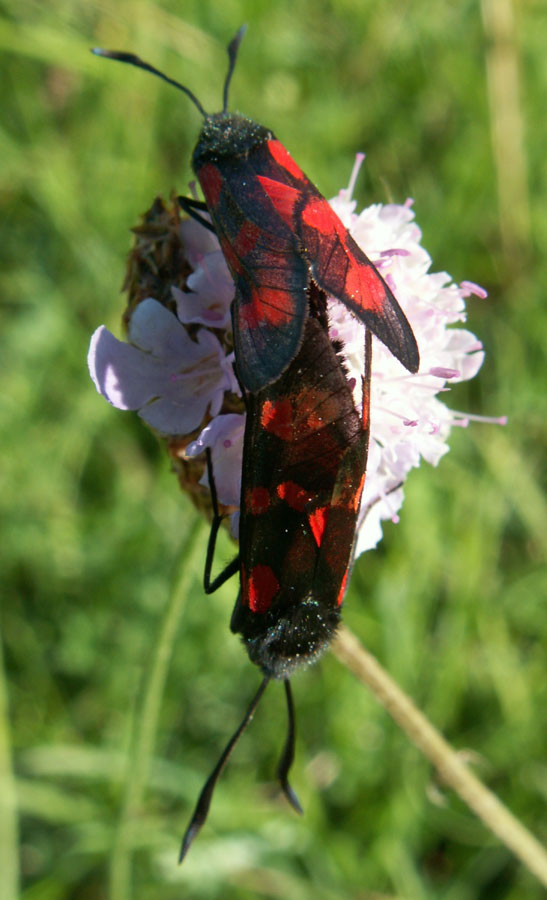 
22 July 2007
On Anchor Bottom, Upper Beeding (Dacre Garden entrance) there were over twenty Six-spot Burnet Moths. Their preferred choice of flower was Scabious.

14 July 2007
There were a handful of 6-spot Burnet Moths whirring around south of Old Shoreham Toll Bridge.

13 July 2007
I stopped at the Downs Link Cyclepath verge meadow just south of the Cement Works where there were a handful of 6-spot Burnet Moths whirring in between the herbs. They showed a preference for landing on Creeping Thistle.

1 July 2007
My first 6-spot Burnet Moth of the year visited a flowering Buddleia on the Downs Link path south of the Toll Bridge.

23 July 2006
At least, in the late morning it was a bit cooler (after the thunderstorms of 22 July 2006) mostly overcast at 24.1 ºC from 11:00 am,  and tolerable for watching Lepidoptera. Six-spot Burnet Moths were frequently seen and frequently overlooked on the lower slopes of Mill Hill.
Adur Moths

28 June 2006
A handful of the first Burnet Moths of the year were seen on Lancing Ring meadows and around the dewpond. The abdomens of these were moths were bright blue. The spots were not counted as they were too flighty.

Burnet Moths were flying over Mill Hill and emerging from their cocoons. Most seemed to be Six-spot Burnets, and some seem to have faded their last spot, and one could have been a 5-spotted one.

20 July 2004
A sea mist rolled over the Lancing Ring meadows and there were a few spots of rain. 6-spot Burnet Moths were emerging from their cocoons.
Images

15 July 2004
On the upper slopes of Mill Hill, there was a very faded Burnet Moth illustrated below.

29 June 2004
There was a Burnet Moth with a striking blue striped abdomen (below right). This was originally thought ( I made this identification because of the blue colour which was most striking and I was disappointed that I did not chase the moth around enough to get a decent photograph) to be the Narrow-bordered Five-Spot Burnet Moth, Zygaena lonicerae. However, it it was perhaps even more likely to be a late flyer of the Five-Spot Burnet Moth, Zygaena trifolii ssp. palustrella.
Message from Trevor Boyd on UK Leps
Report with Image
Adur Burnet Moths
Images (Photographs by Mike Wall)
Burnet larvae feeding on Clover (May 2003) 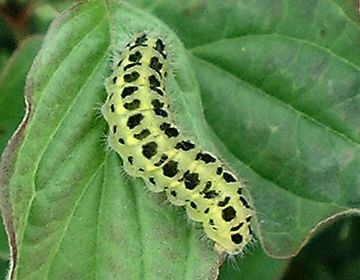 18 June 2004
A caterpillar discovered crawling over the Dogwood on Lancing Clump is one of the Burnet moth larva, but which one, the 6-spot, Zygaena filipendulae?

27 July 2001
I went up the the Lancing Ring chalk pits (east side) (TQ 187 063) to try and find out what burnet moths they were by counting the spots. This was difficult because these moths would not settle.  There were about 15 moths in a couple of small meadows, attracted to Greater Knapweed.
UK-LEPS Discussion Group (for Butterflies and Moths)
Cornish Moths


18 July 2001
The only insect of note on Mill Hill was a solitary Burnet Moth south of the car park (TQ 212 072). It quickly flew away, the bright red most distinguishable. One of the reasons for my identification was the cocoon photographed at the end of July 2002 and shown below (this replaced an earlier photograph of July 2000). 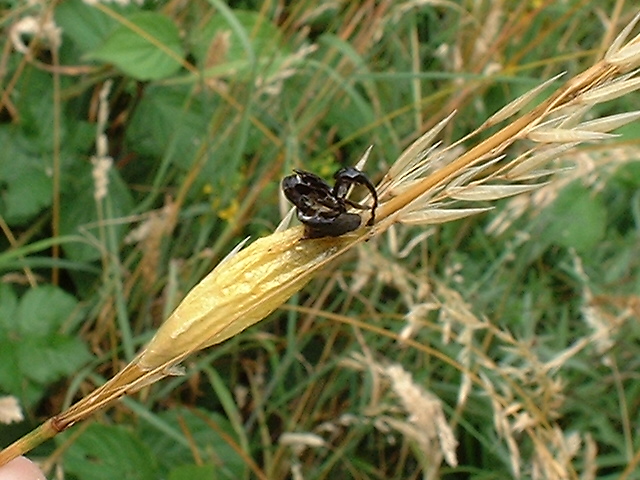