What mushroom is this from unimproved ungrazed chalkhill?
Click on the images to enlarge 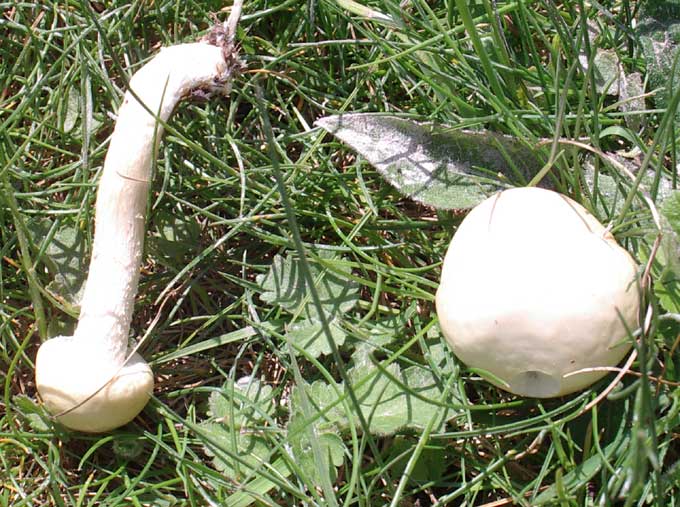 6 May 2005
There were some more of the small mushrooms (illustrated on the right) on the lower slopes of Mill Hill, that I still have not been able to identify. These two were next to the path. They appear to be very new.

27 September 2004
A mushroom with a small (15 mm cap diameter) orange cap was seen amongst the grass and herbs on the lower slopes of Mill Hill south of the Tor Grass zone. It is illustrated in the three photographs below. It seems favour lightly disturbed ground.

6 August 2004
There was a small mushroom amongst Goosefoot and near the Tor Grass on the lower slopes (illustrated below).

There was a small (15 mm cap diameter) mushroom (photographed above) in the grass by the path in the dog mess zone on the lower slopes of Mill Hill. The white texture of the stem is slightly distinctive in the first photograph. The rabbit faux is an accident in the central photograph. I noted the slight "inrolled margin" of the cap.

The best suggestion was the species Stropharia coronilla.

.This species has proved very difficult to identify positively.