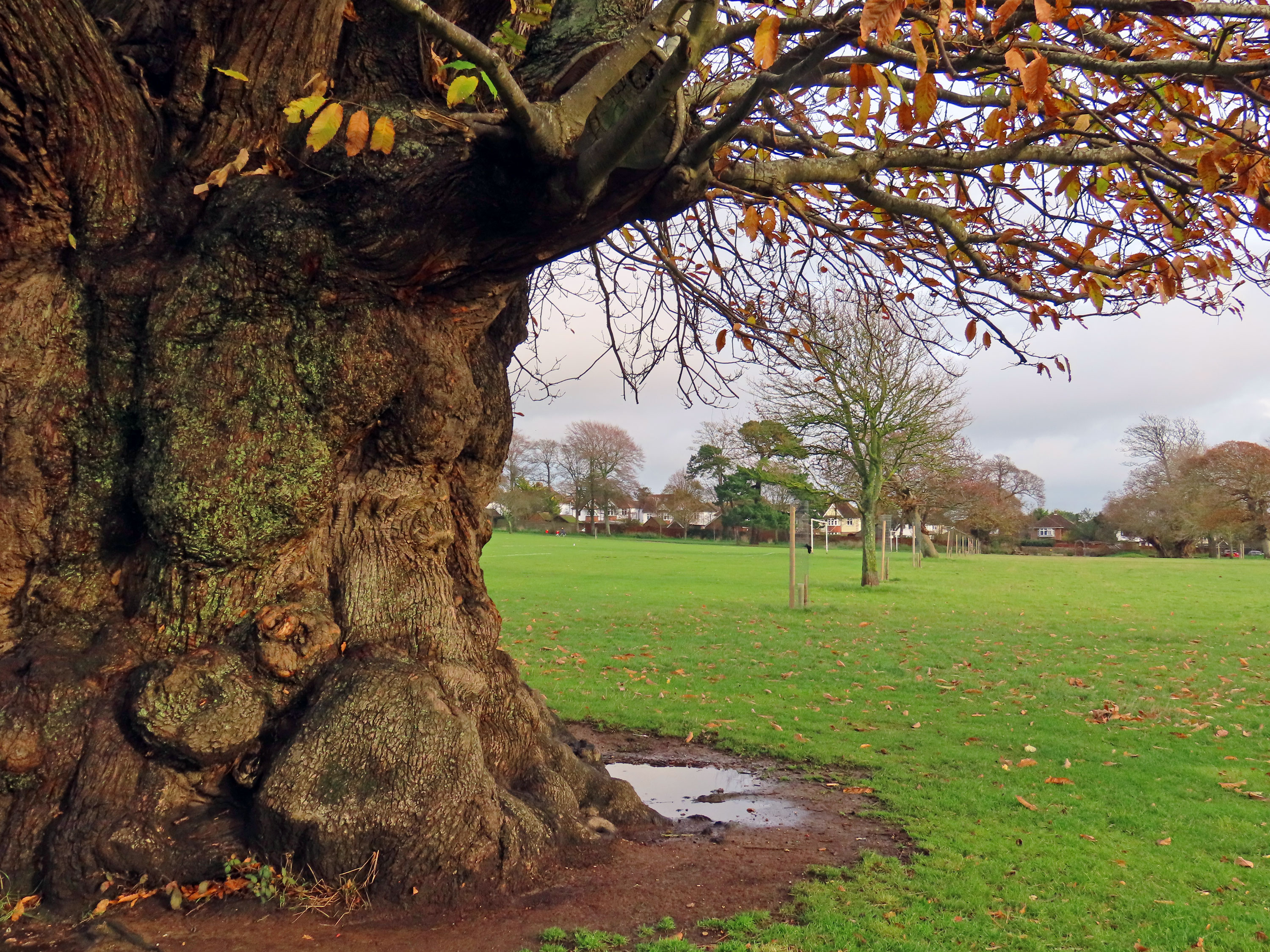 Bowling Green Chestnut
from the west 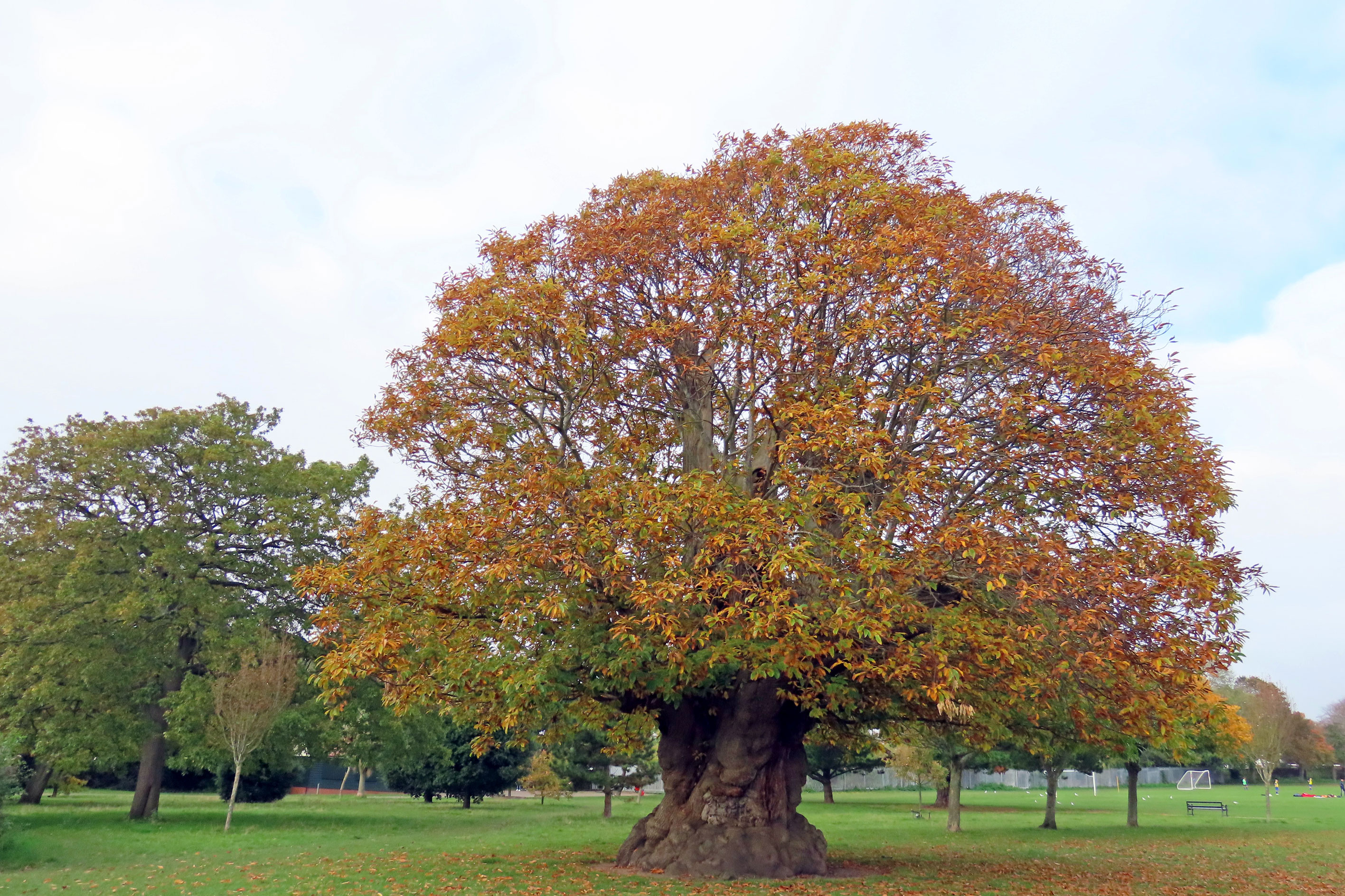 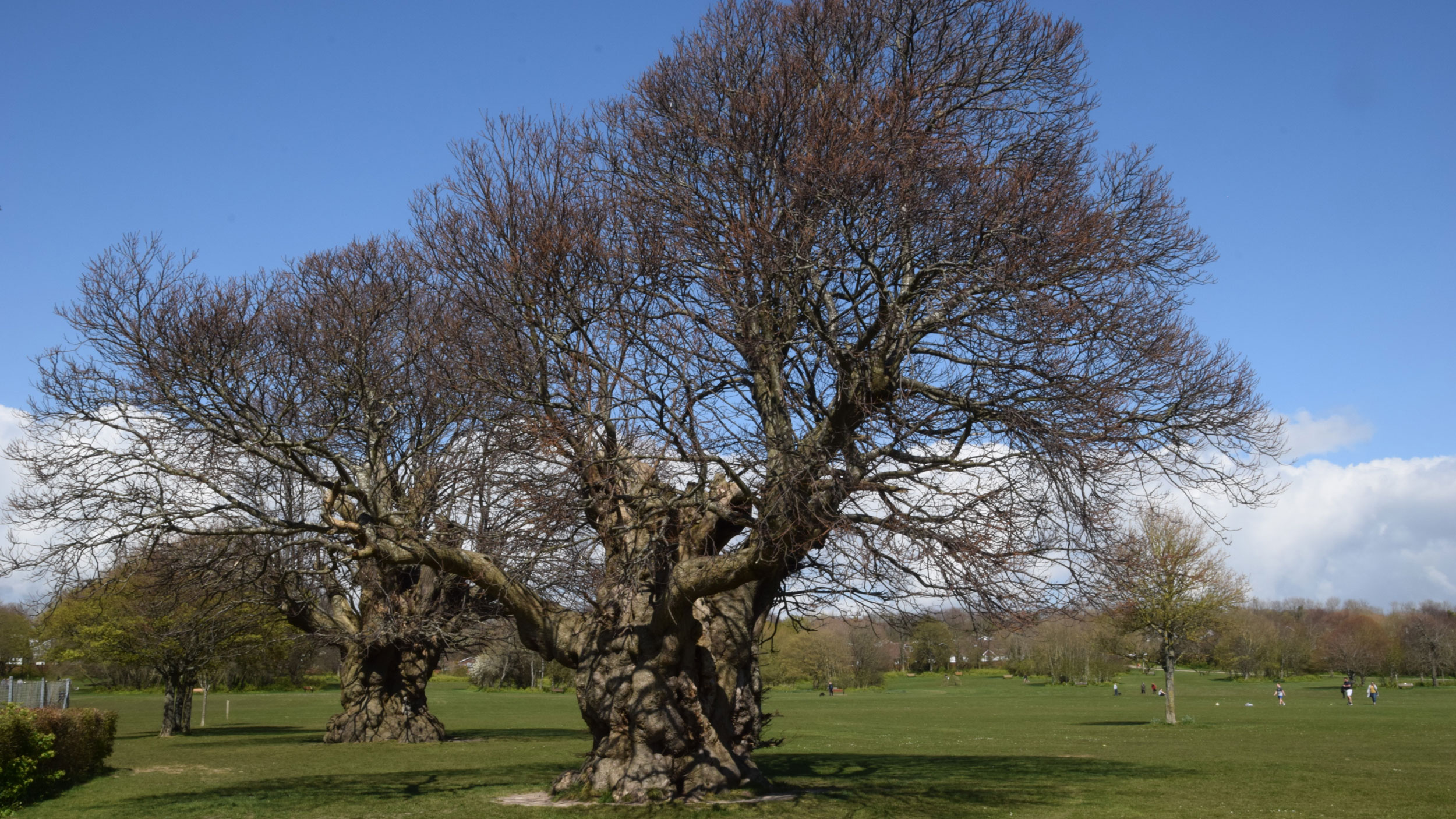 Bowling Green Chestnuts
from the south 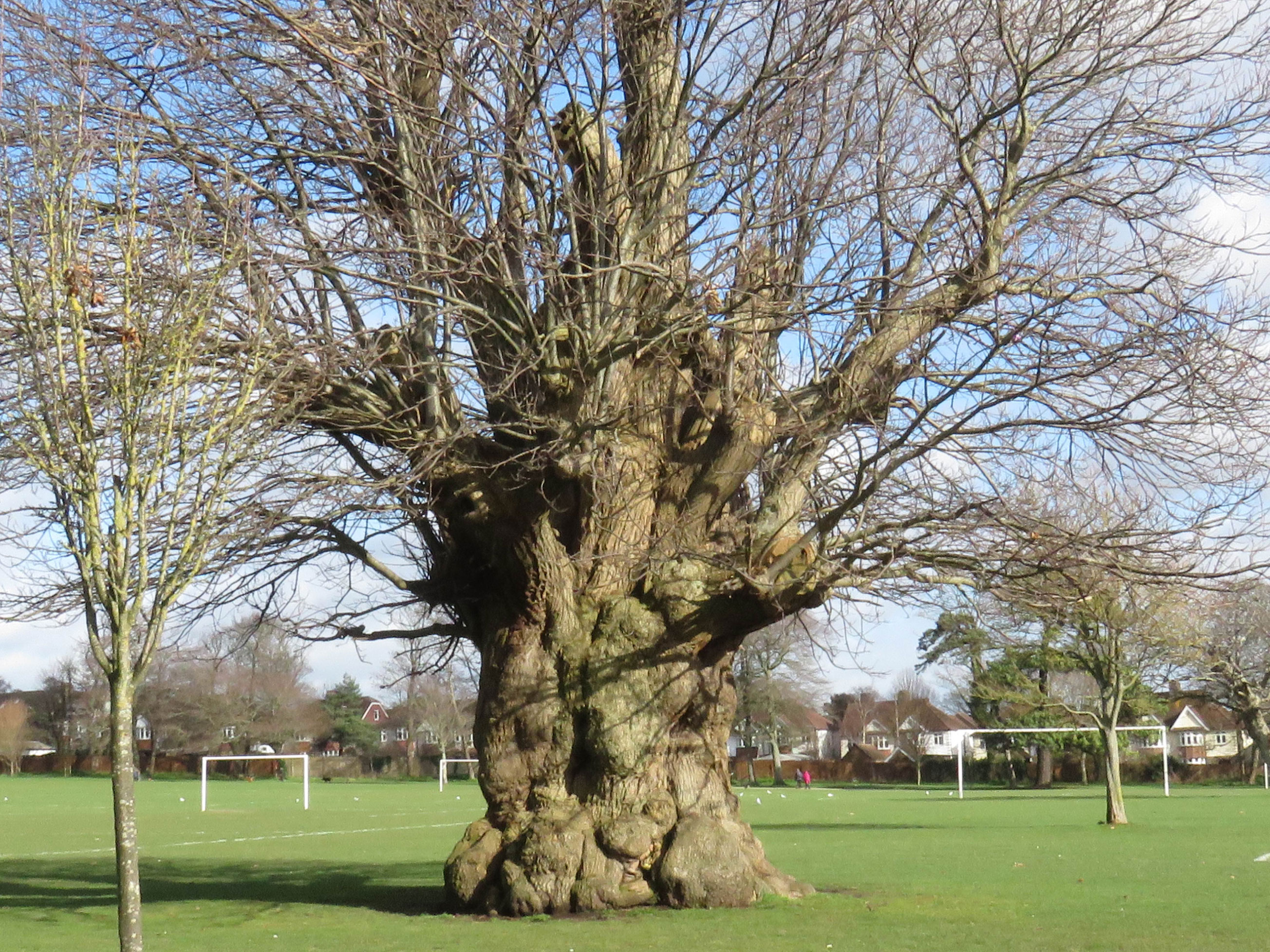 Older Tree (from the west) 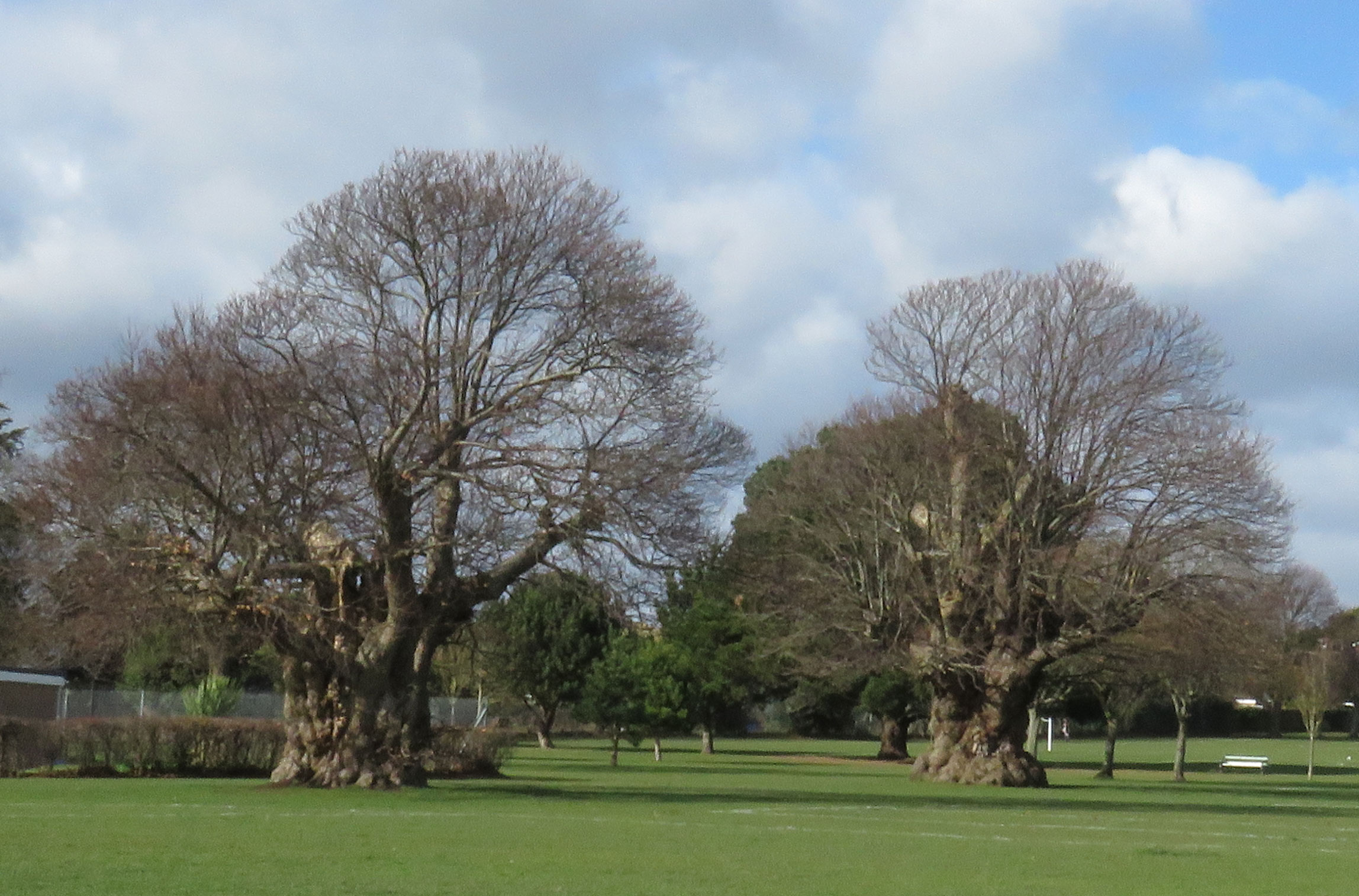 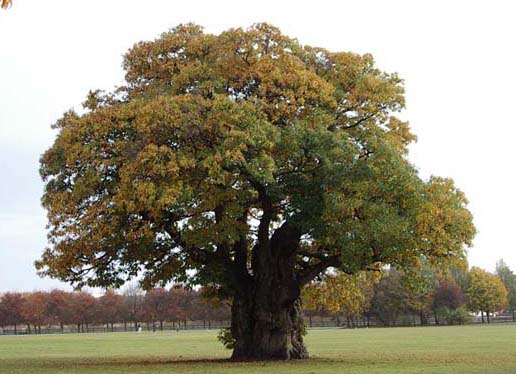 This looks like the younger tree which may only be only 60 years old? or 90 years old? 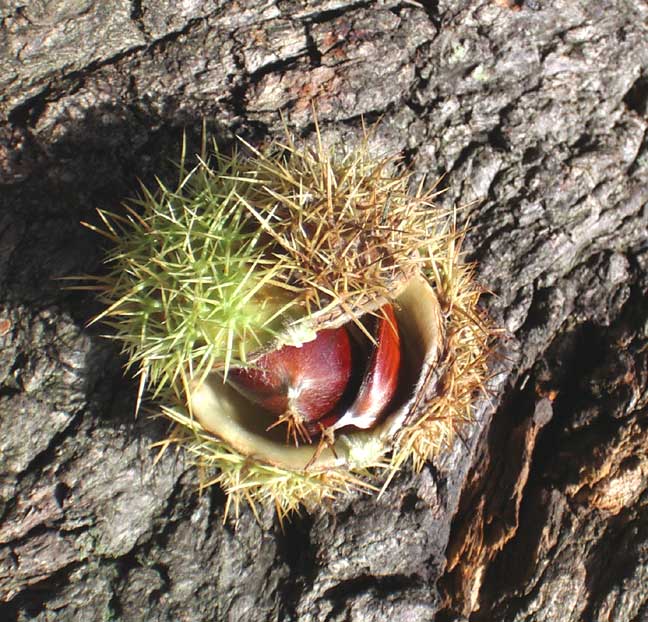 A Sweet Chestnut tree in Buckingham Park was one of the most notable Chestnut trees in the whole of Sussex. The largest was 18 metres (59 ft) high with a girth of 222 cm (over 7 ft) in the main part of the trunk, about 1.5 metres from the ground. This is the large tree by the Bowling Green (Ref: The Sussex Tree Book by Owen Johnson, ISBN: 0 9533493 0 6).  This tree may be over 200 years old and a topographical drawing by Samuel Hieronymous Grimm (in the British Museum) of Buckingham House in 1782 shows the tree as one of several in a row. 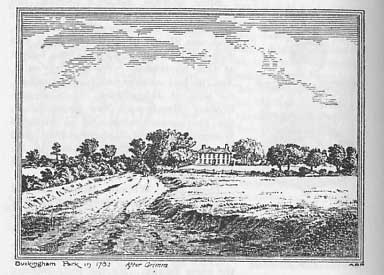 It might be younger though, but I expect it is at least 90 years old?
. Other large Sweet Chestnuts in Sussex include one at Petworth Park at a height of 35 metres (115 ft) and another at Cowdray Park to 25 metres high. The Sweet Chestnut is not a native tree to Britain and in its European and Asian range the tree often reaches 30 metres high.

NB: According to Adur District Council, no trees in Buckingham Park have Tree Preservation Orders (TPO) allocated to them. A list of trees with TPOs does not seem to be available for Adur District.

I think that these trees should have a "Tree Inspection Record" to assess its possible dangers.

At least one Chestnut Tree in Buckingham Park is over 320 years old according to two different unconfirmed sources. I have my doubts that the trees are this old.
Management of Veteran Trees 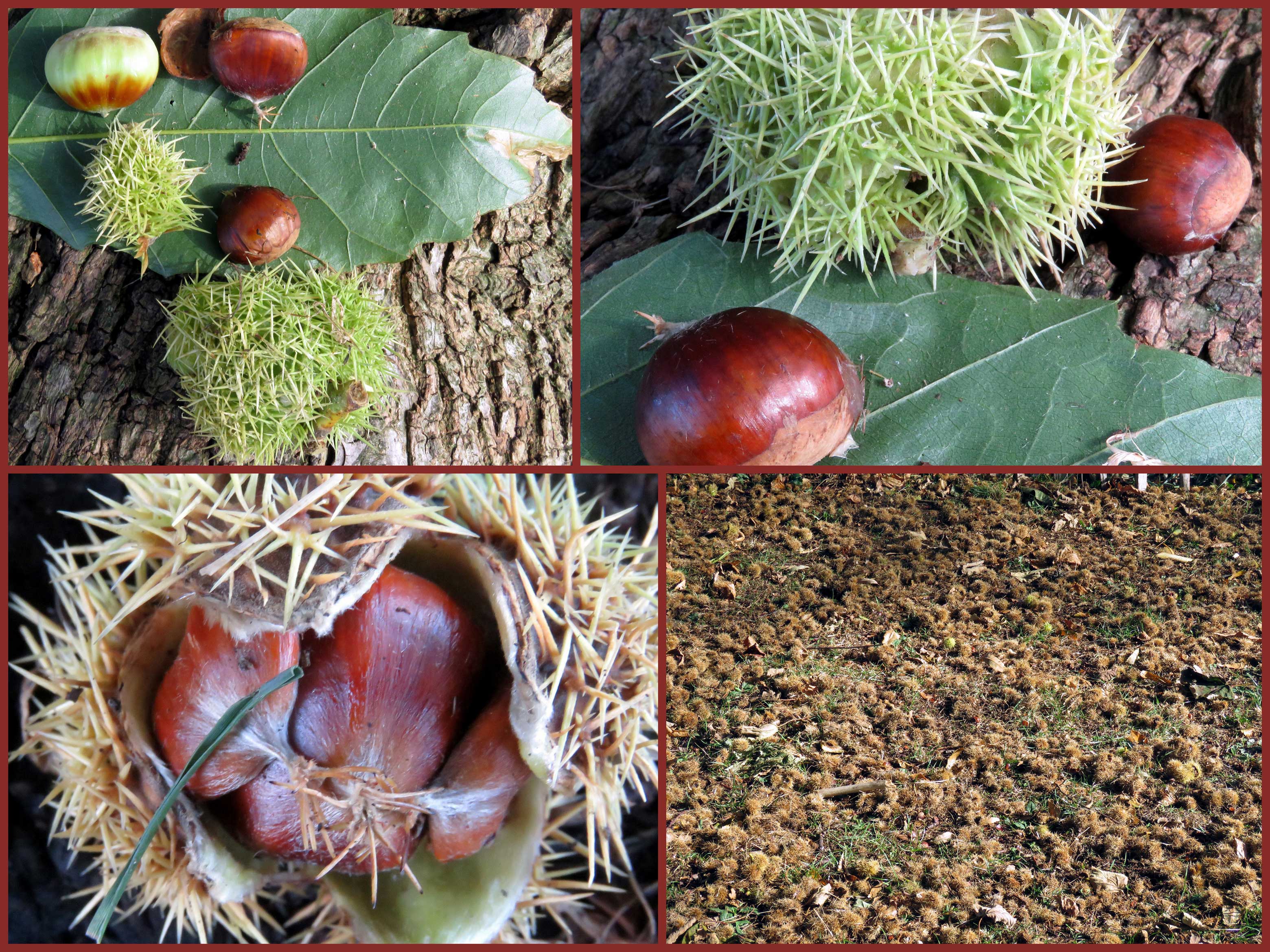 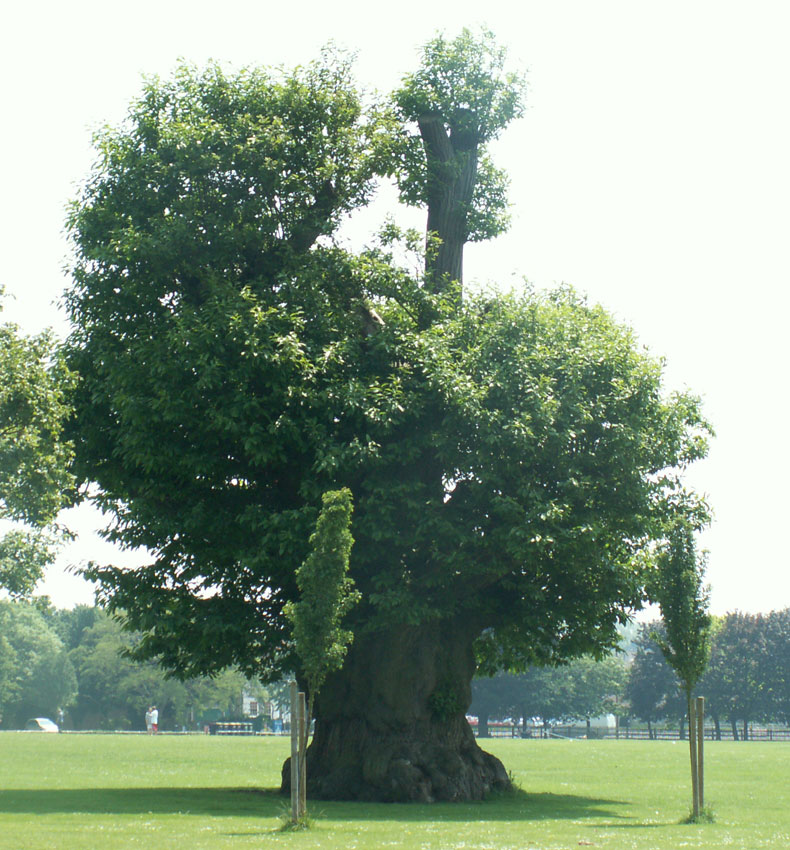 It is looking slightly better now.

27 June 2005
The trees do not look quite so bad in leaf. I still think they should have chopped away the rotten bits and perhaps one of the large side branches. The problem is Chestnut Trees will lose limbs if they are allowed to grow unmanaged.


The main contention was that the trees should have had TPOs on them so experts could have been consulted before the lopping.

19 December 2004
The Chestnut Trees on the eastern side of Buckingham Park and now being decimated. The tallest tree of the lot has had its two largest trunks completely lopped off.


It is no longer the tallest in the park and this is left to the best nut cropper (left, above), the best of the trees remaining. Then the other major trunk was sawn off (picture on the far right).

12 December 2004
I have now discovered they have hacked away at the other younger Chestnut Tree near the Bowling Green at Buckingham Park, Shoreham, that formed the pair, and made another unsightly job of it. This tree was not damaged in the summer gales.

7 December 2004
The most attractive of the four two century old large Chestnut Trees in Buckingham Park has now been butchered. It had received damage after the gales in July 2004, but it has now been destroyed as an important landmark and this was the most notable tree in the whole of the Adur district. The foreman of the tree fellers said that the work had been done on safety grounds after a public complaint and on advice to chop away the rotten bits (hearsay).

10 August 2004
This would be one of the last photographs of the younger of the two Chestnut Trees on the western side. 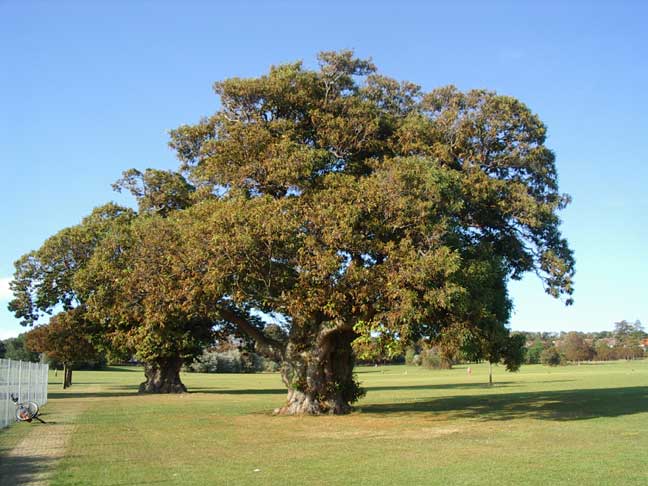 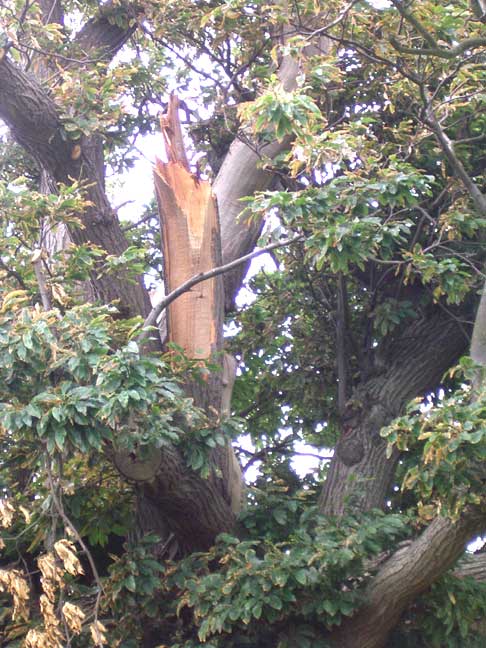 21 July 2004
This is the first time I have noticed that the two centuries old specimen Sweet Chestnut Tree in Buckingham Park has suffered damage in the recent gales and one branch seems to have broken off. I probably have not passed that way since the gales and I could not see any signs of the fallen major branch. 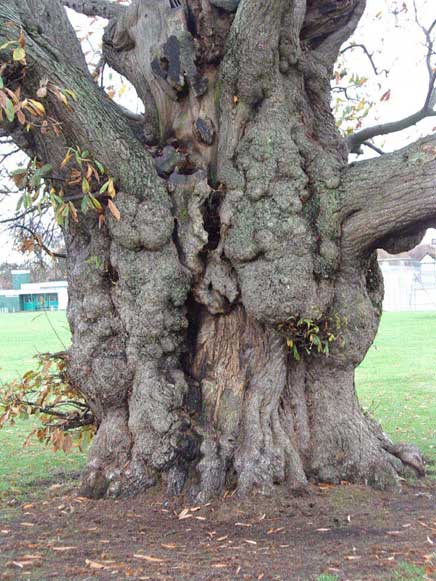 Trees at the eastern end:

That Old Chestnut in the Park

Residents and visitors were dismayed at the major surgery performed on the best loved tree in Shoreham in the autumn of 2004. The Bowling Green Sweet Chestnut Tree in Buckingham Park was the oldest of a pair and had stood proudly in the centre of Buckingham Park where a Chestnut Tree had stood proudly for the last two or three centuries. The Sussex Tree Book by Owen Johnson includes this tree as number three of the finest Chestnut Trees in Sussex before the lopping and only exceeded in girth by two others in the county. It was particularly important to me as I included it as the most important tree in Shoreham in my nature slide show presentation.

Was it the same tree that featured in a topographical drawing by Samuel Hieronymous Grimm (in the British Museum) of Buckingham House in 1782 showing the tree as one of several in a row?  It was in the same place and one expert had estimated that the old tree with a height of 18 metres (59 ft) and with a girth (shoud this be diameter?) of 222 cm (over 7 ft in the main part of the trunk, about 1.5 metres from the ground) was 265 years old, which meant it was planted in 1740. My estimate is that the tree was planted between 1657 and 1840 and could be anything between 165 and 348 years old. My best guess is that the tree was replaced in the nineteenth century.

It had certainly remained the same since I remember it in the 1960s. During that time it had received minor lopping but nothing so drastic as last year. Adur District Council maintain that the work was necessary on health and safety grounds. One major branch had broken off in the gales in July 2004, but the proud tree had stood firm and intact against the Great Storm of October 2000 which had decimated half of the trees in Buckingham Park.

Its partner was a much younger tree and was a standard showing no sign of the coppicing of the 19th century, so I think this was a relatively young tree that had not finished growing and this tree had doubled in size since the 1970s. This one was not damaged in the gales so the work seemed unnecessary to the passer-by.

Chestnut trees on the same latitude on the eastern side of Buckingham Park were also badly lopped, but these large trees were not so attractive to the eye. One remains largely intact and this provides a good crop of chestnuts every year.

Chestnut Trees are not native to England. Popular books claim they were introduced by the Romans and there is evidence that the Romans used Chestnut wood in England. Some dendrochronologists claim that the Chestnut would most likely have introduced even earlier, and some claim that it did not become an established part of the British arboreal flora until late medieval times. I think on the balance of probability that the Romans introduced the tree, but it did not become popular and a self generating species on a large scale until the nineteenth century when its wood was valued for fencing.

The Sweet Chestnut grows on clay and alluvial soils but it is not found on the chalk downs. Trees are natural architecture and I have asked Adur District Council for a list of trees with Tree Preservation Orders on in the Adur District.

Estimating the Age of Large and Veteran Trees