Cichorioid Daisies are the "dandelion-like" plants with heads with containing only ligulate (strap-like) florets.
With Dandelion and Hawkweed species there is over 1000 species in Britain - and most of them are yellow-flowered.
Asteraceae or Compositae, subfamily  Cichorioideae

Recording advice
A side-on picture of the flowerhead and stem. This cannot be verified form a 'full-face' picture looking down onto the flowerhead; there are very many similar flowers. 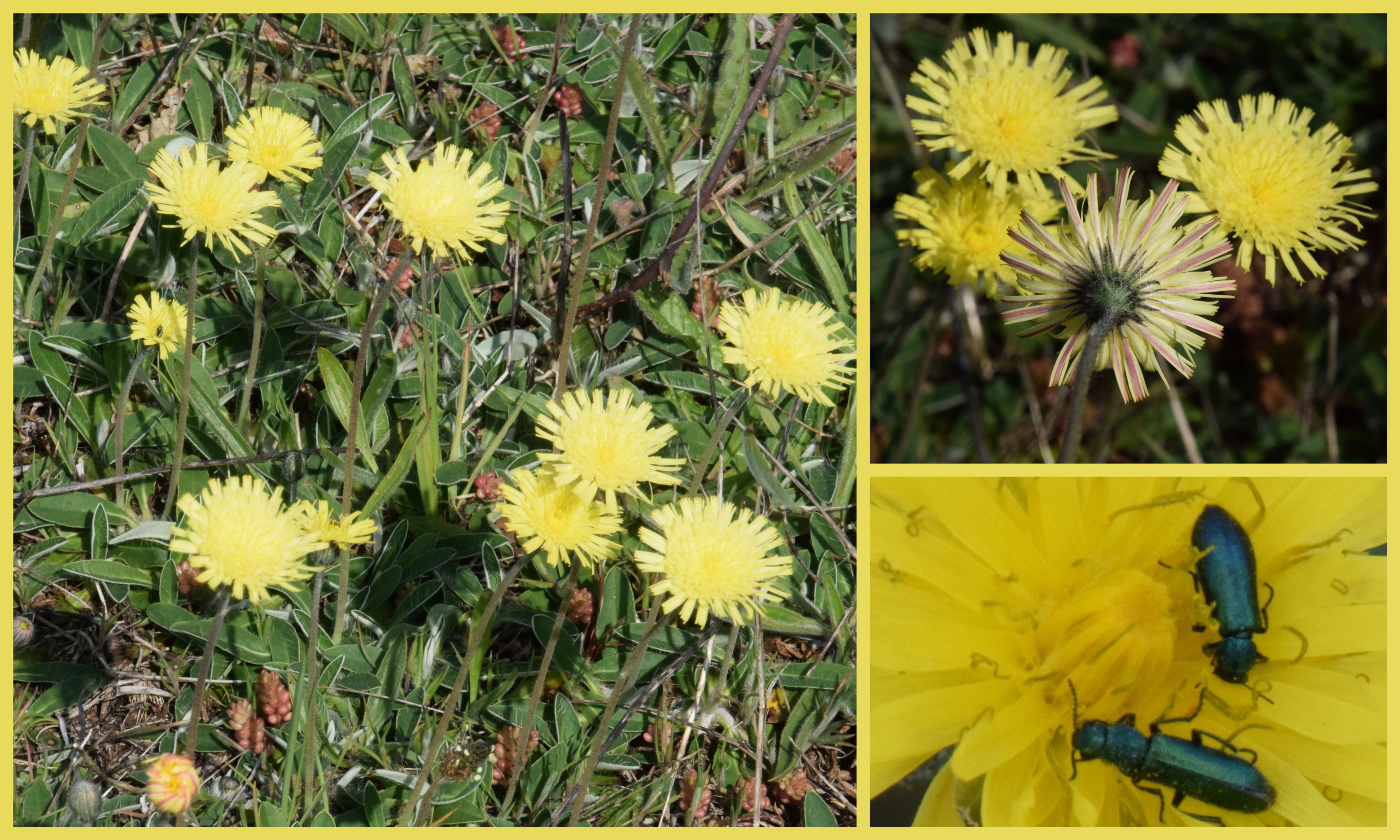 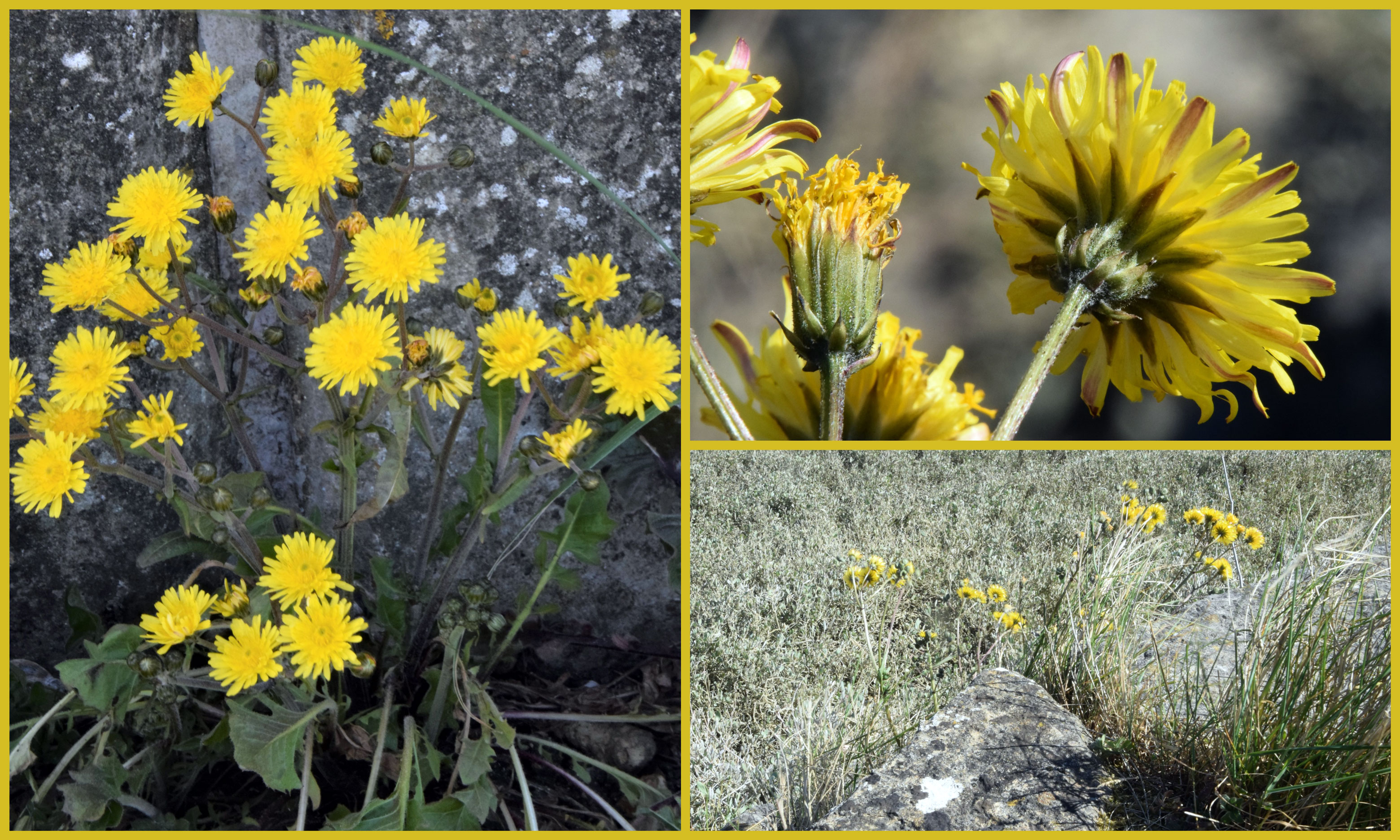 Beaked Hawksbeard
Down by the River Adur, western towpath by Ricardo 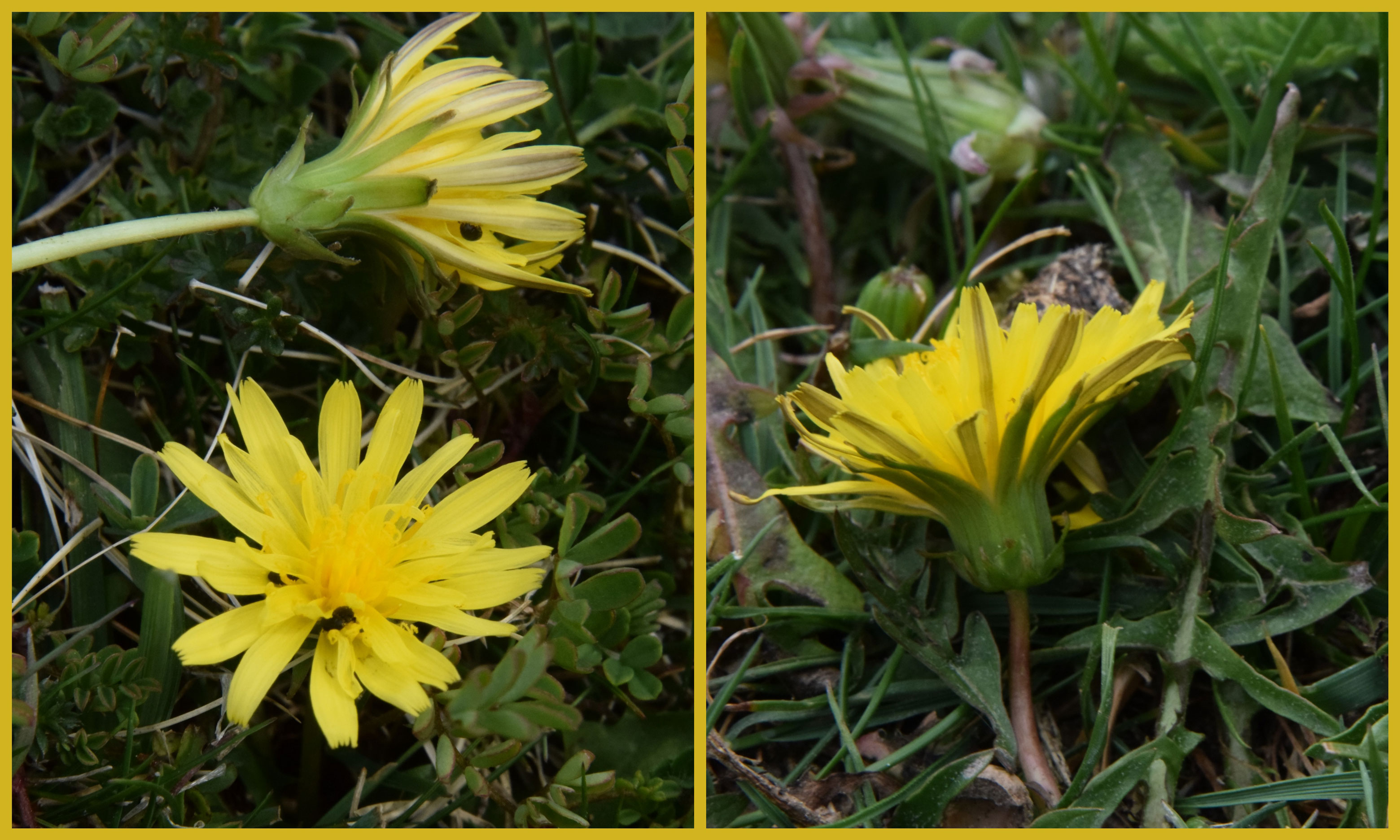 19 June 2019
Lesser Hawkbits were identified (from photographs) on the chalk lawn at the top of Chanctonbury Drive, north Shoreham, and Rough Hawkbits on the top of Mill Hill. 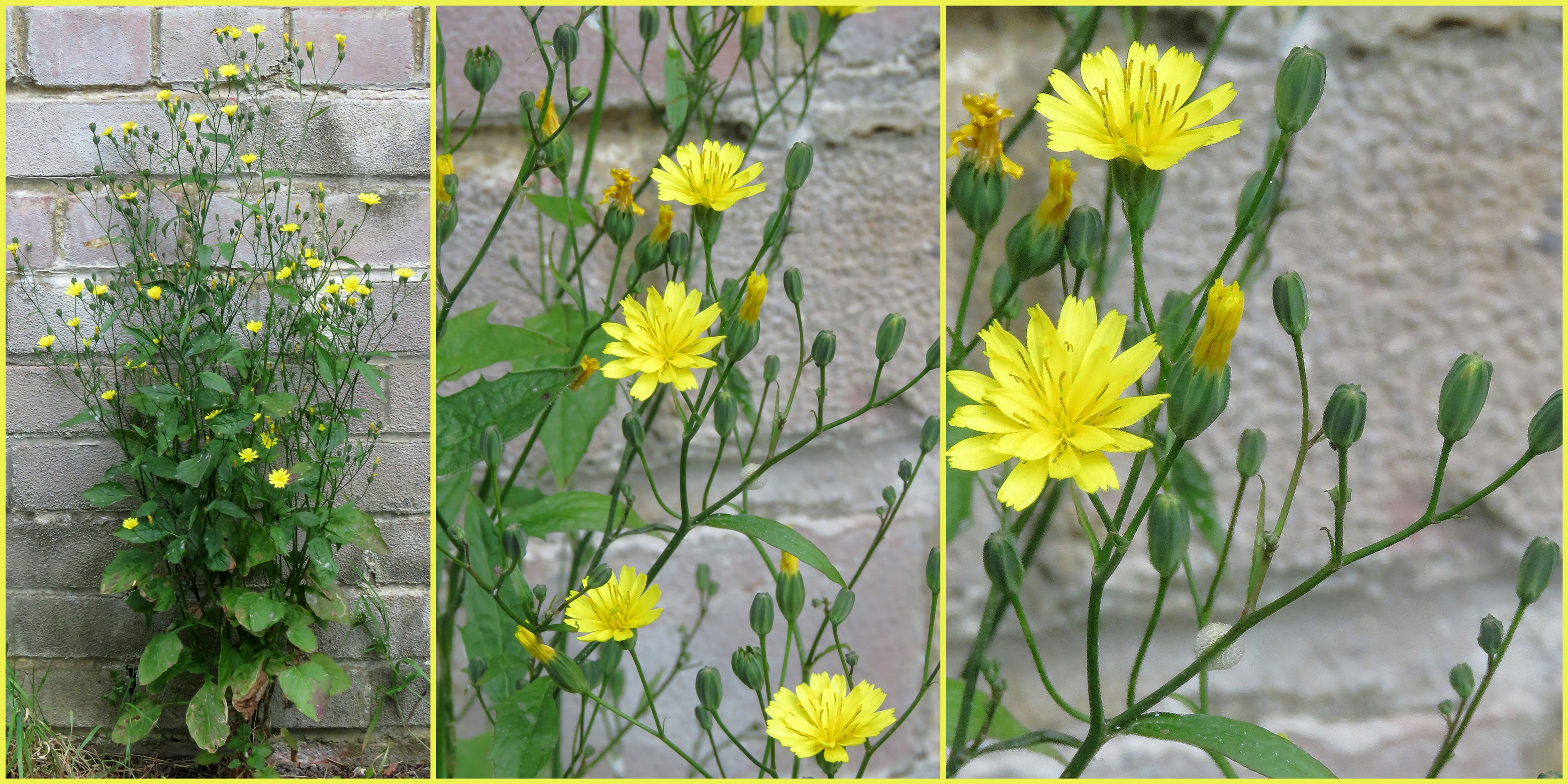 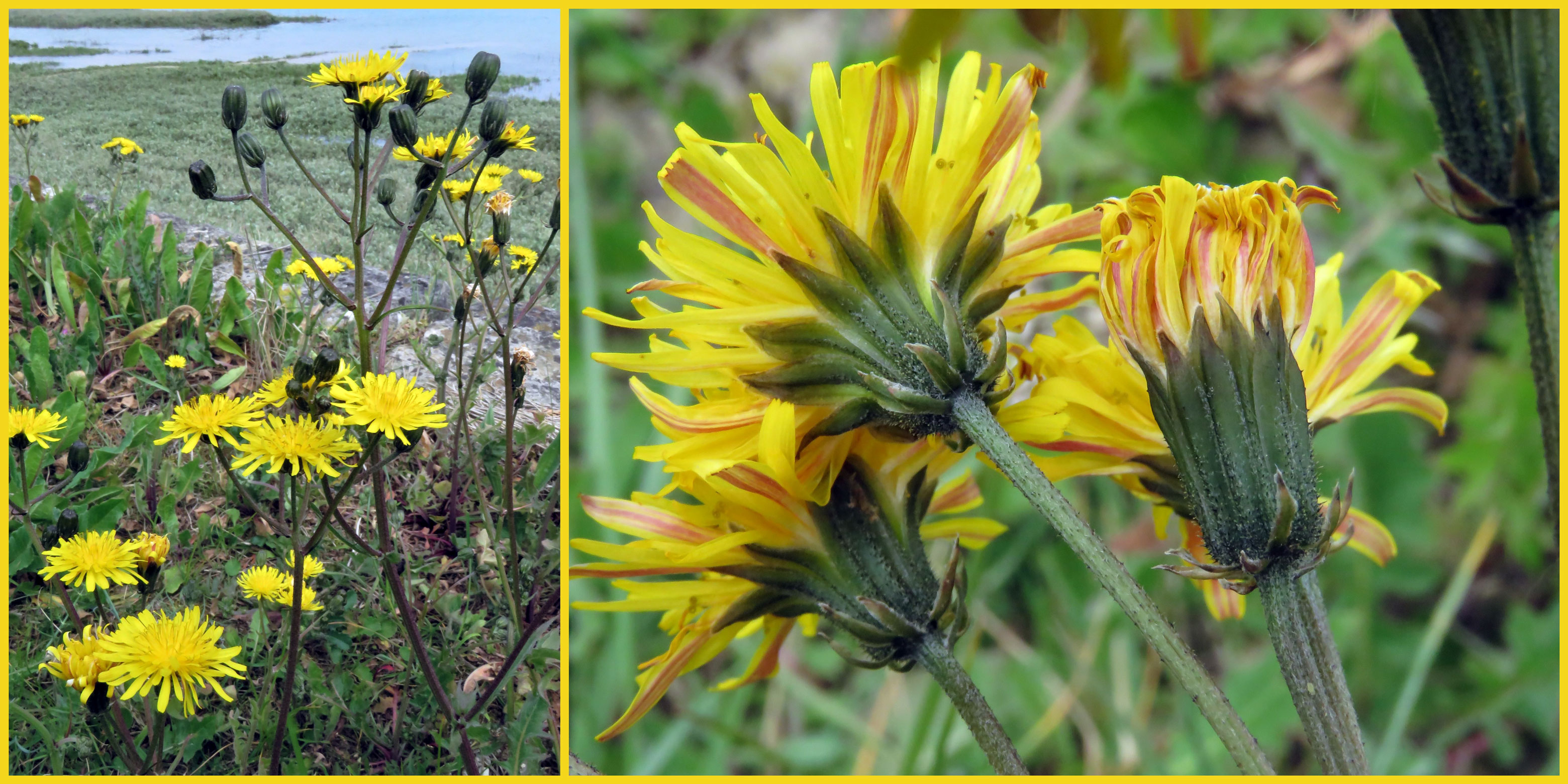 Beaked Hawksbeard, Crepis vesicaria
Seen in the flickr group Flora of the British Isles: A Photographic Guide
Towpath next to Ricardo 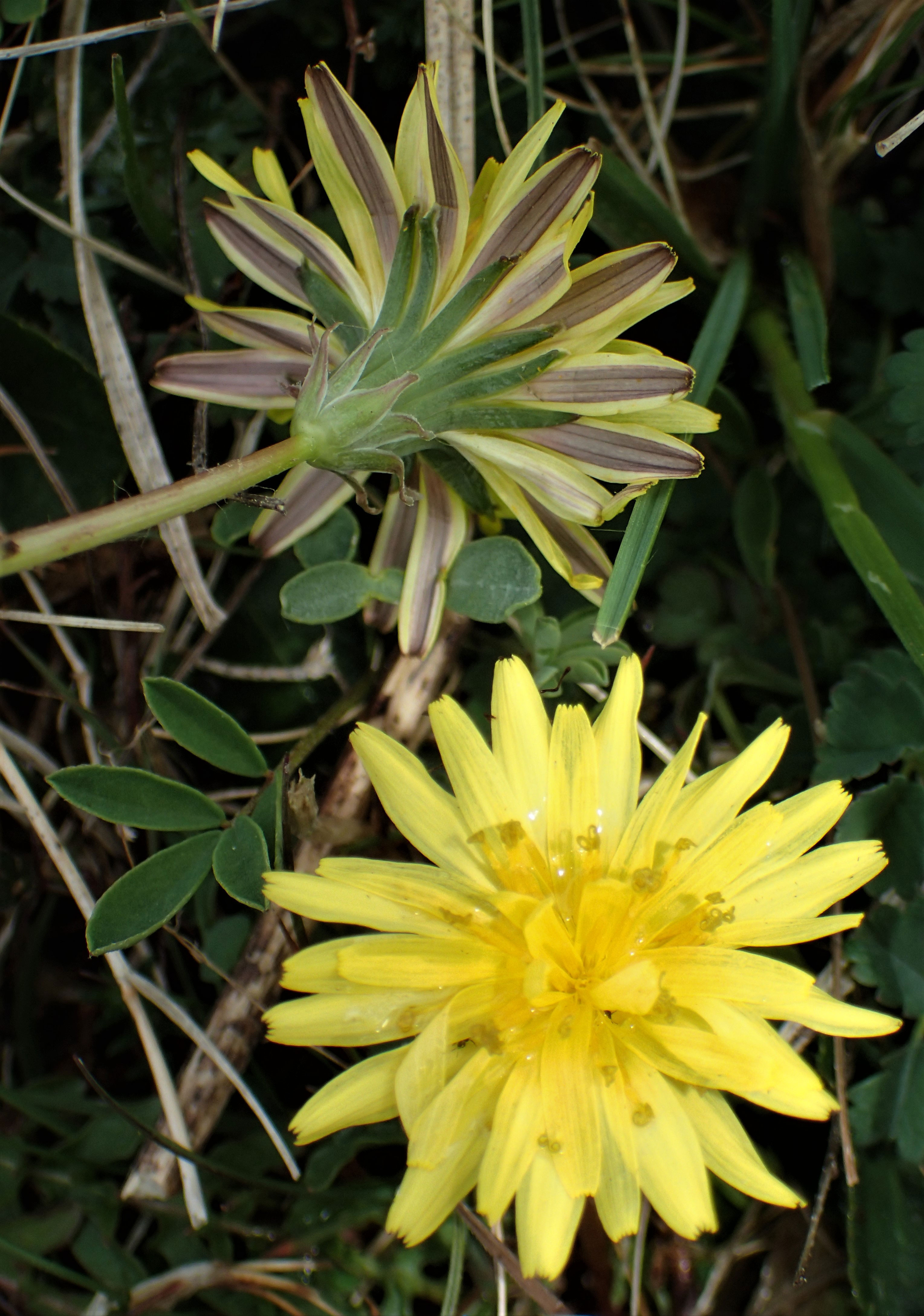 If you remain unsure then cut it. The Dandelion is the only yellow member of the Asteraceae with a hollow stem and it exudes a milky sap. Dandelions secrete latex, not very much in the wild varieties.
More Information 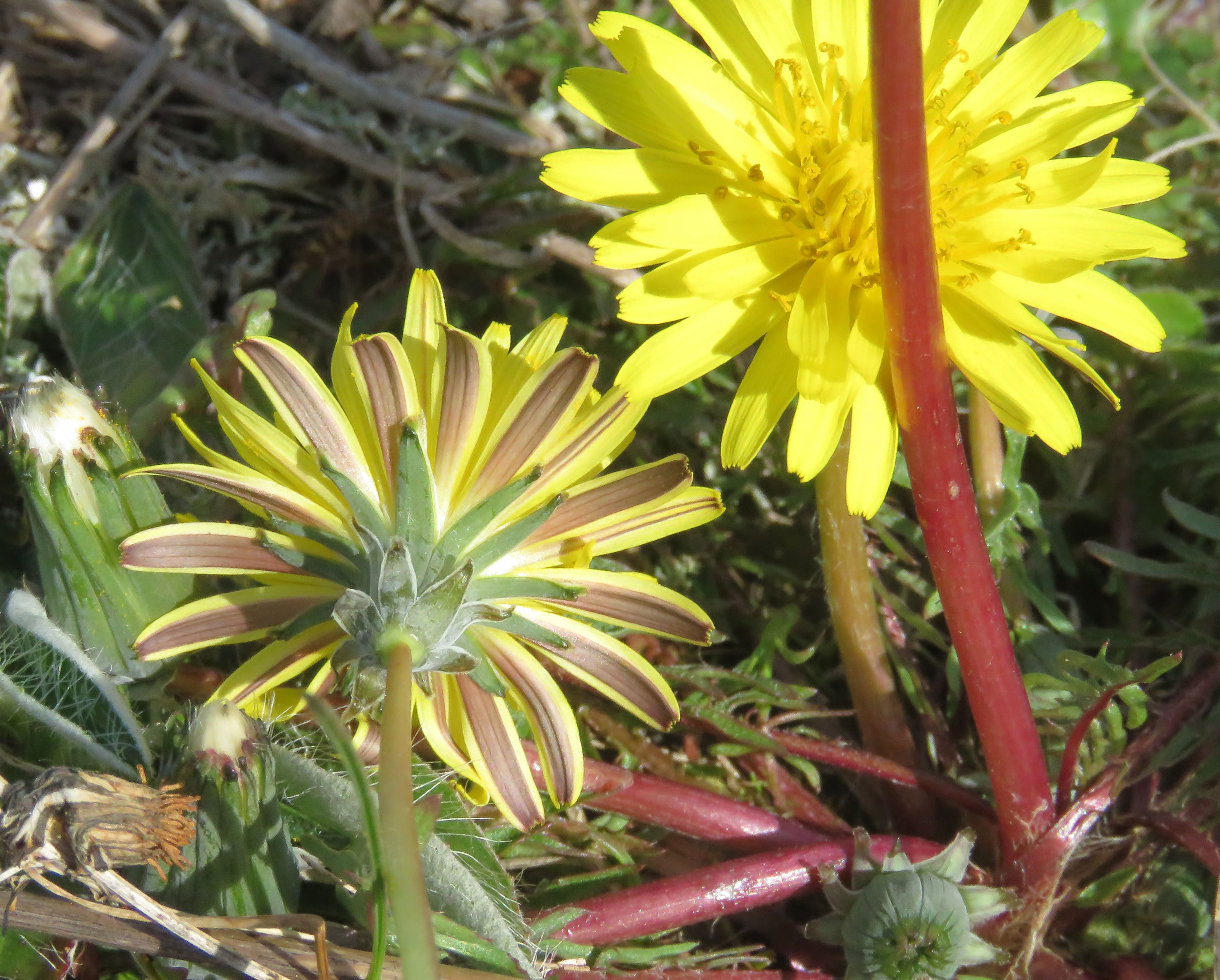 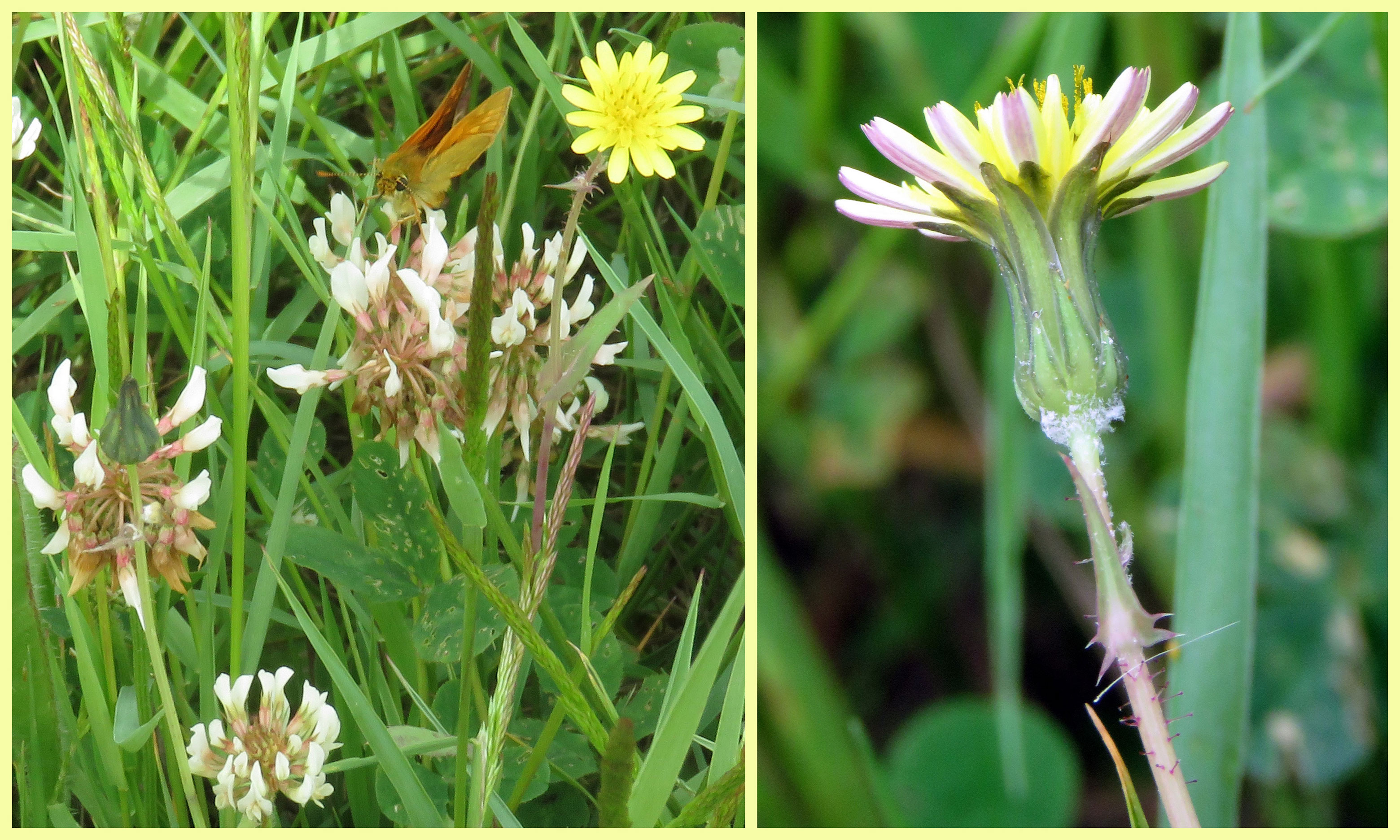 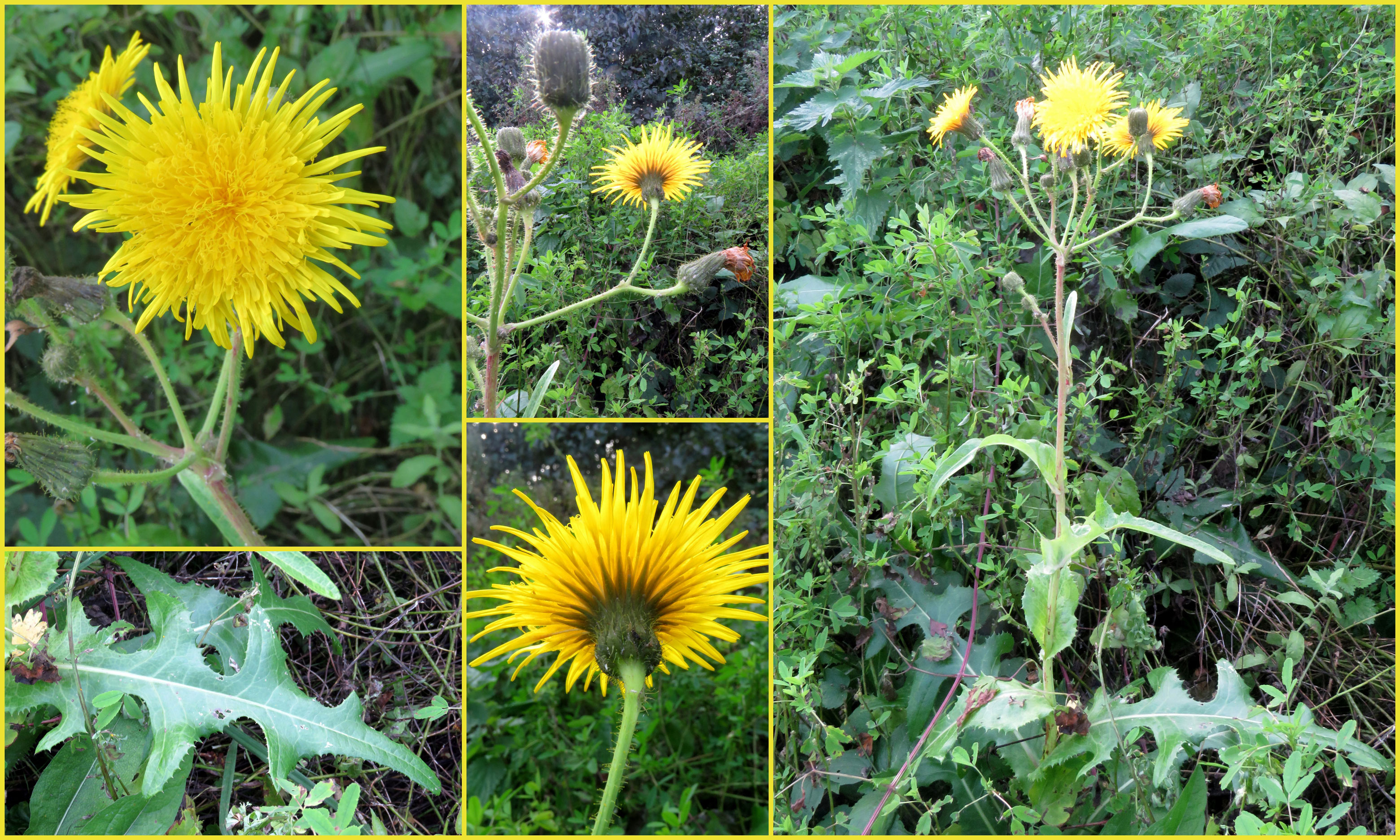 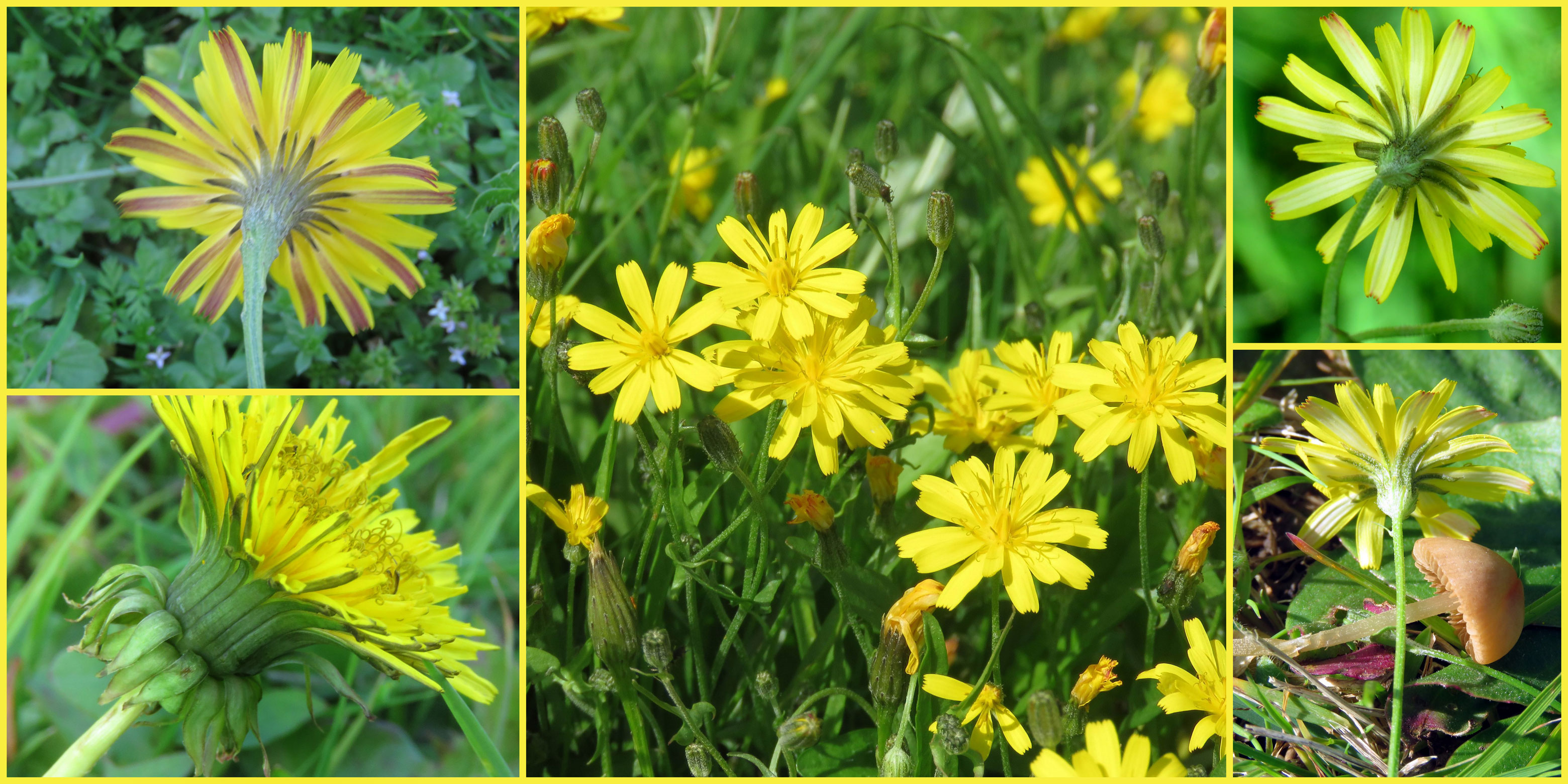 The mown green space at the the top of Chanctonbury Drive, north Shoreham, was not only grass but a mixture of the common species of wild plants or weeds including a wide variety of he dandelion-like Cichorioid Daisies which I find tricky to identify and even more problematic to remember how to differentiate them for sure, with all the leaves entangled and not always easy to see and remember which is which. The patch as far as I could determine included the easy to recognise Dandelions, Taraxacum officinale agg., and Rough Hawkbit, Leontodon hispidus, the reasonably easy Lesser Hawkbit, Leontodon saxatilis, but also thought to include frequent Autumnal Hawkbit, Scorzoneroides autumnalis, which I am far less positive about. The top left was probably Cat's Ear, Hypochoeris radicata and Nipplewort, Lapsana communis was probably there. The grass patch was mown to lawn standards a few days later. 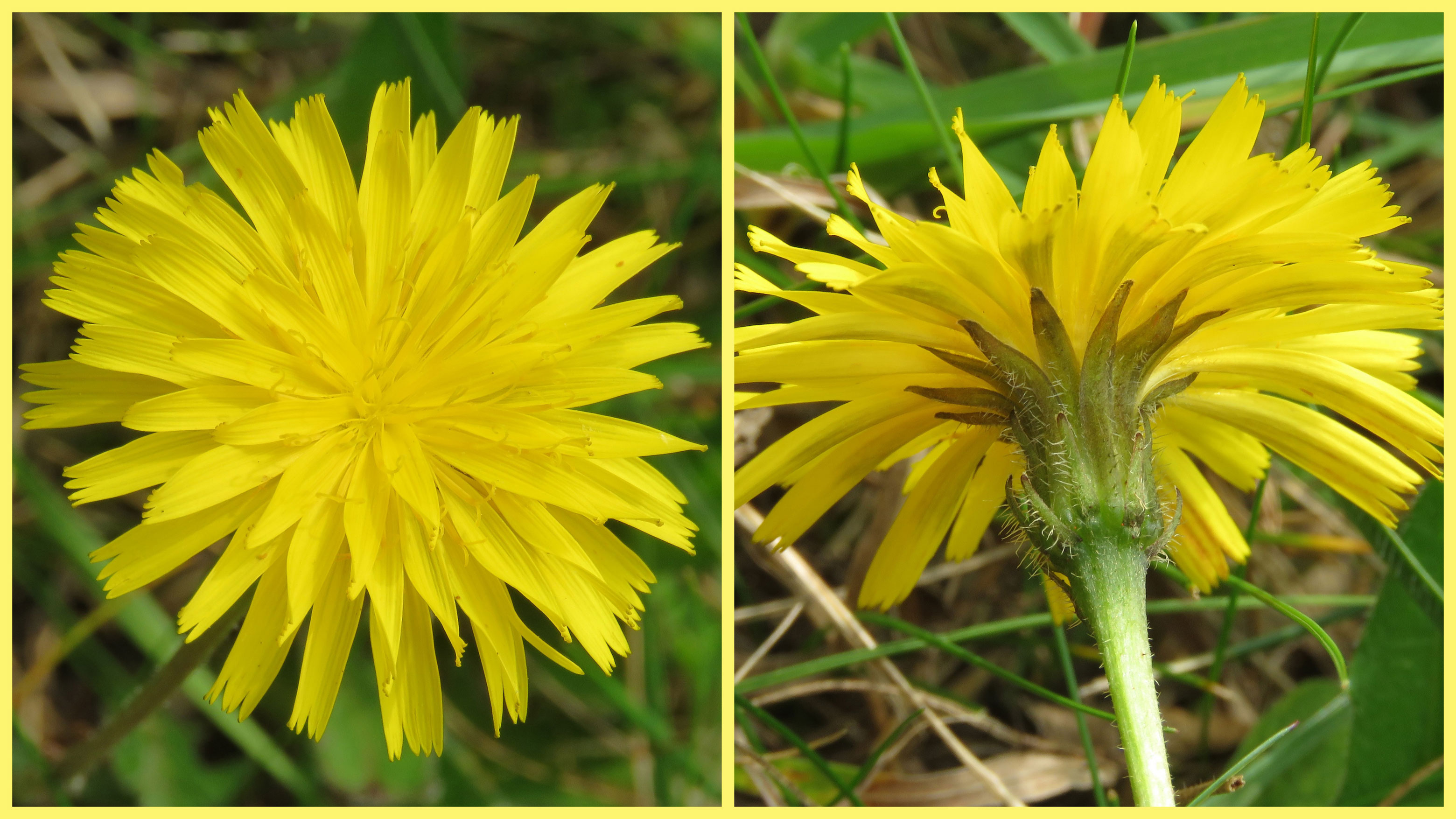 Of the cichorioid daisies (dandelion-types) that are so easy to confuse, the lower slopes of Mill Hill hosted Rough Hawkbit and Lesser Hawkbit, but not Smooth Hawk's-beard (misidentified). 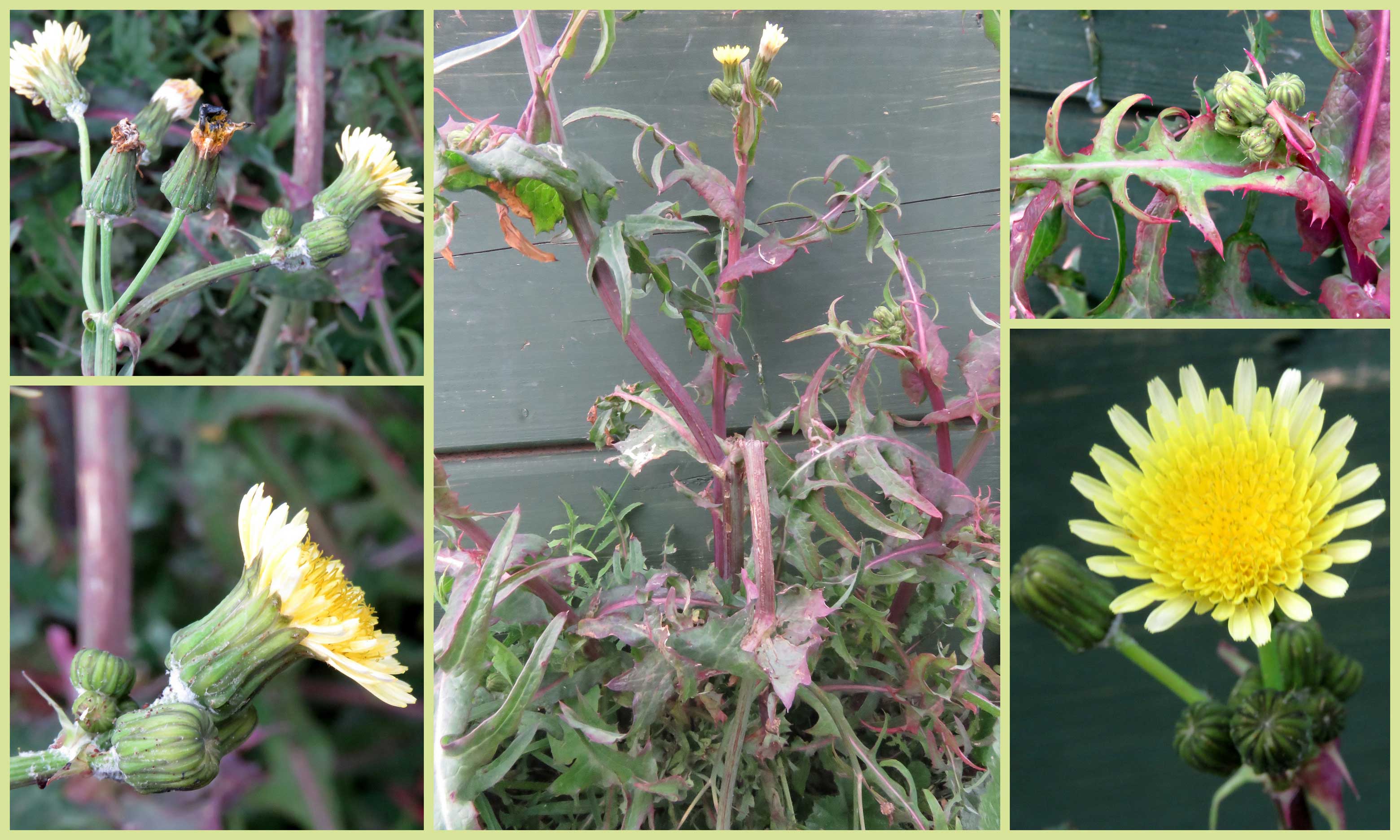 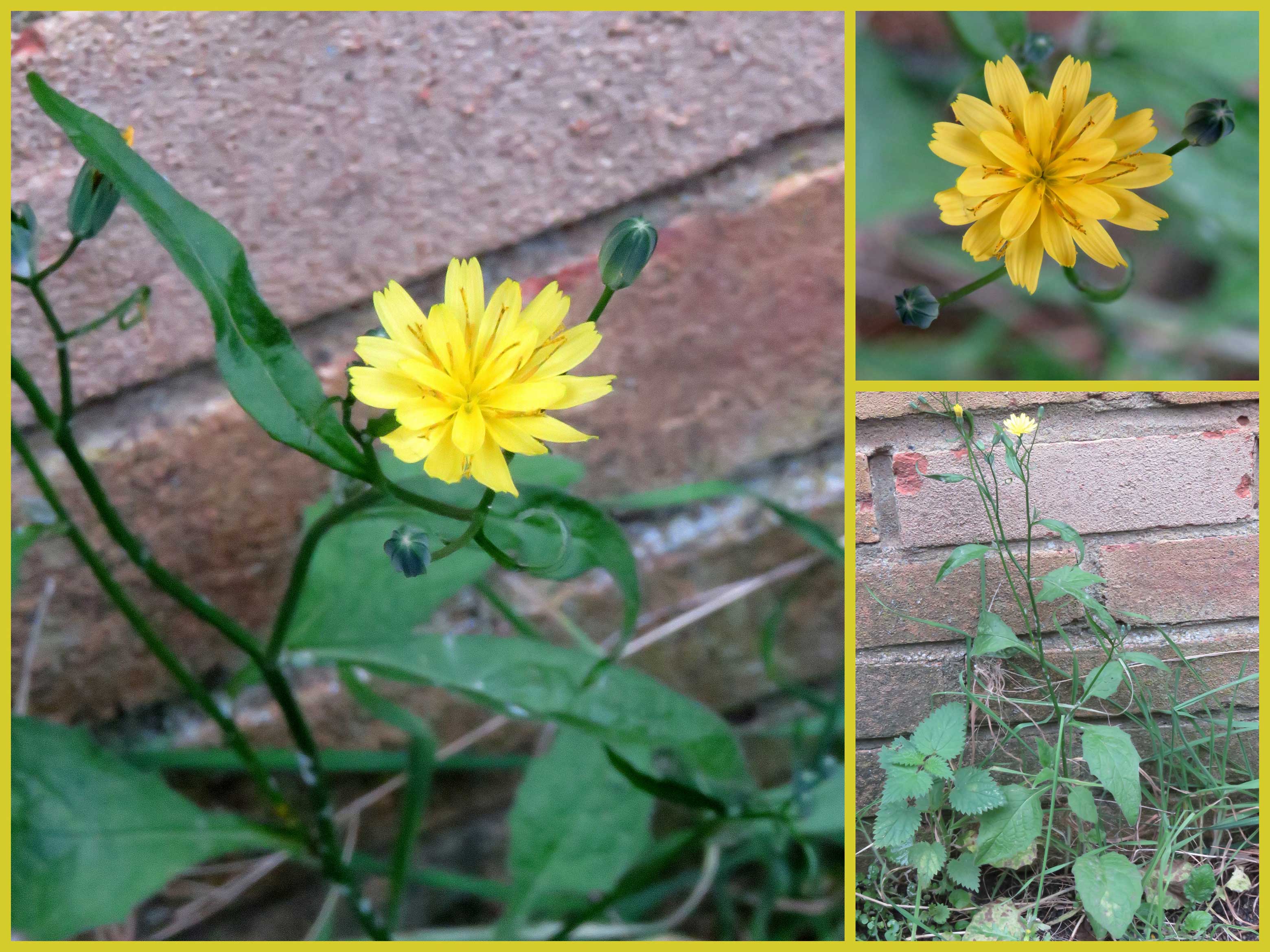 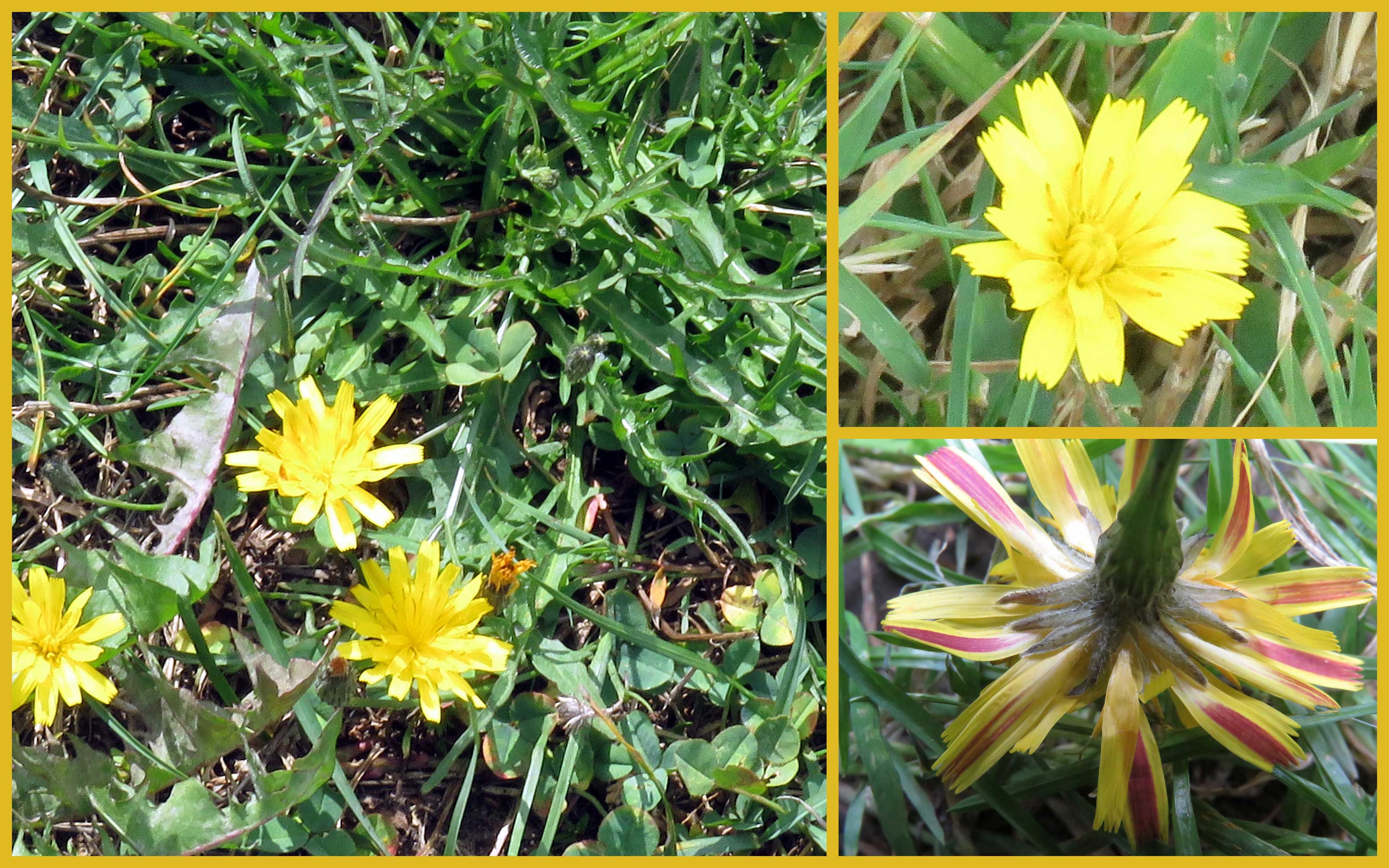 This prostrate plant was seen on a mown verge in Gordon Road, Shoreham, growing like a Dandelion but much smaller. This is an Autumnal Hawkbit.

6 October 2016
On Shoreham Beach East, (first roundabout beach east of Ferry Road) the predominant Cichorioid Daisy yellow flowers appeared to be Hawkweed Ox-tongue (both prostrate and upright), with one dimunitive clump of Prickly Sow Thistle, and second in prevalence were Dandelions and others more easily recognised, were Hairy Ragwort. 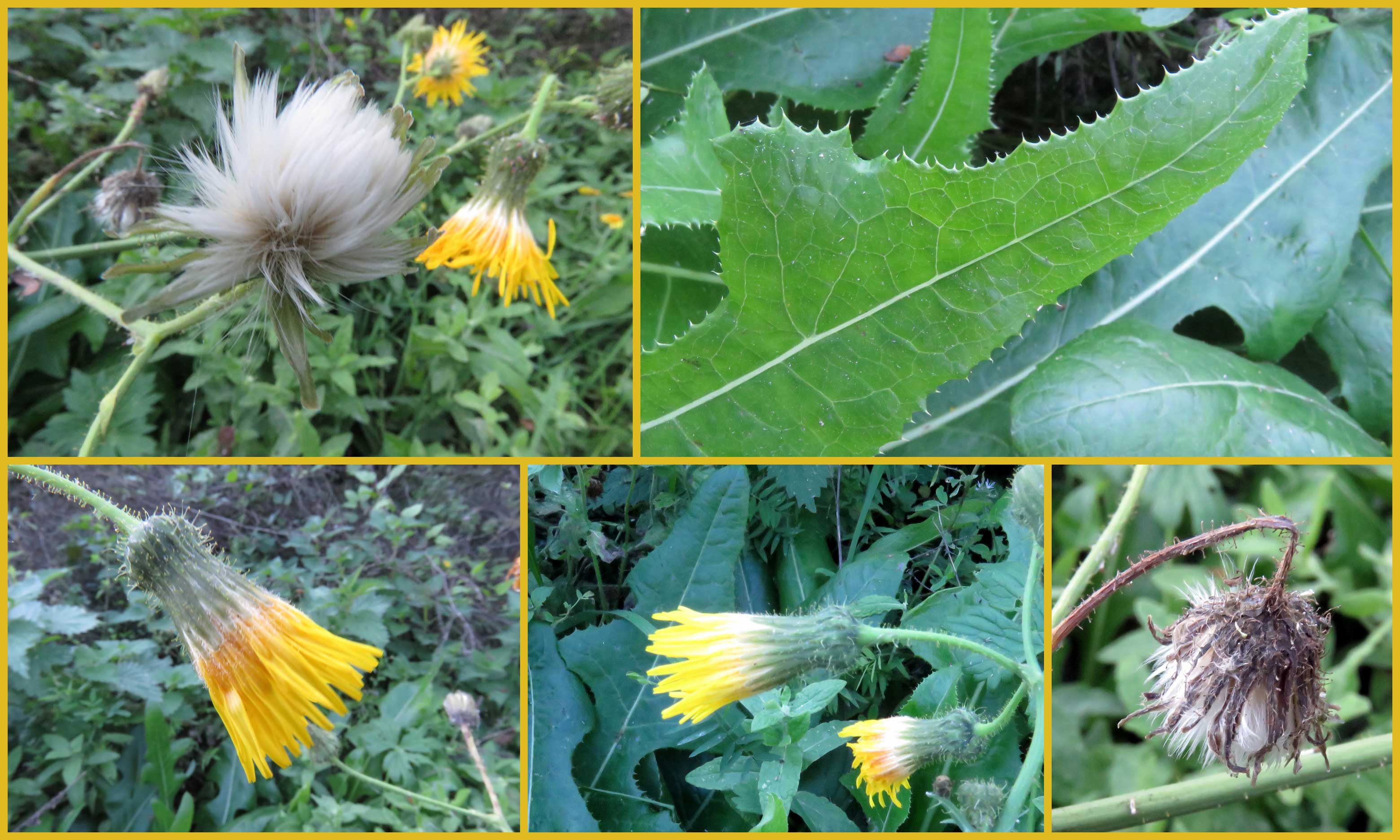 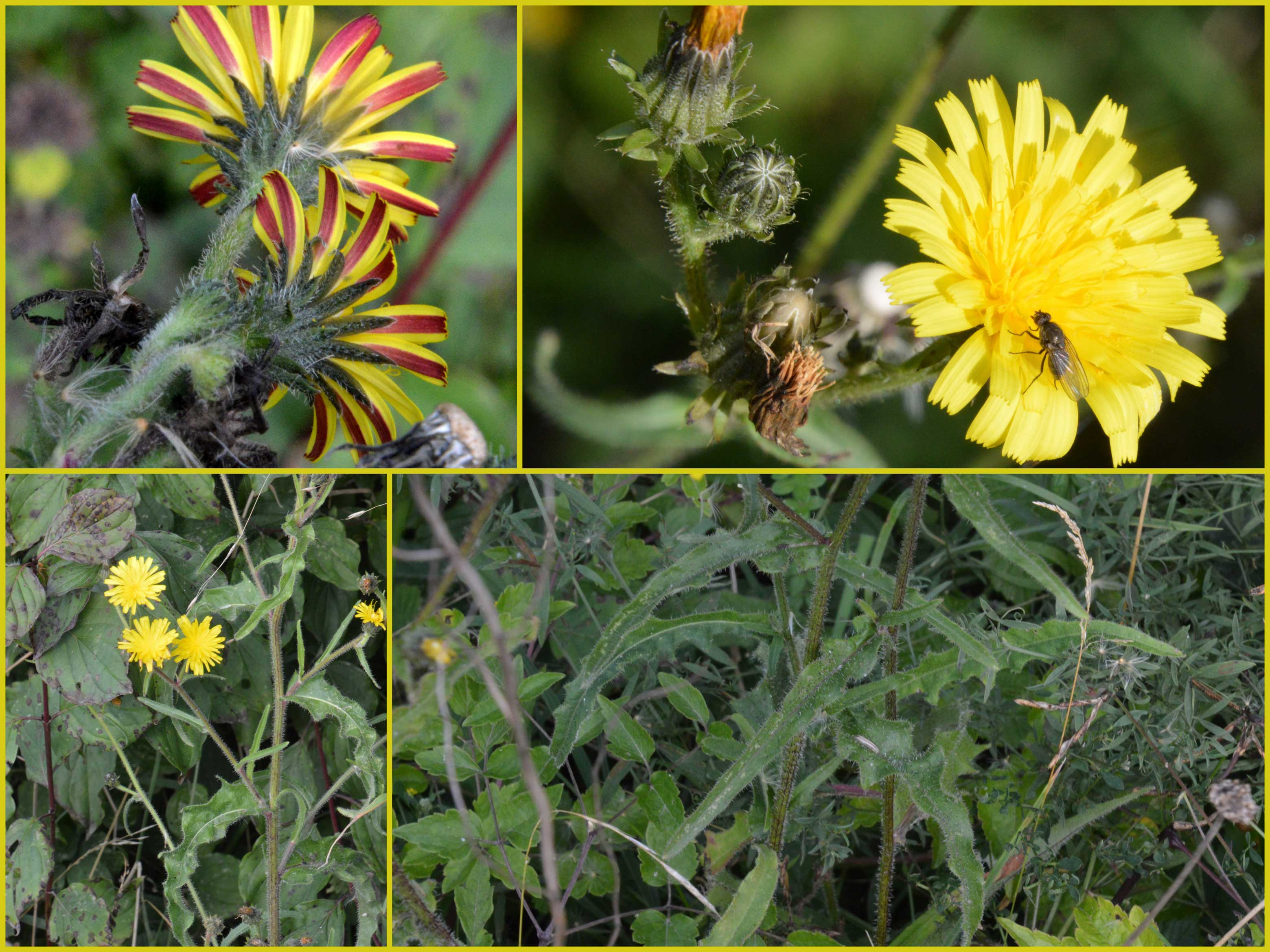 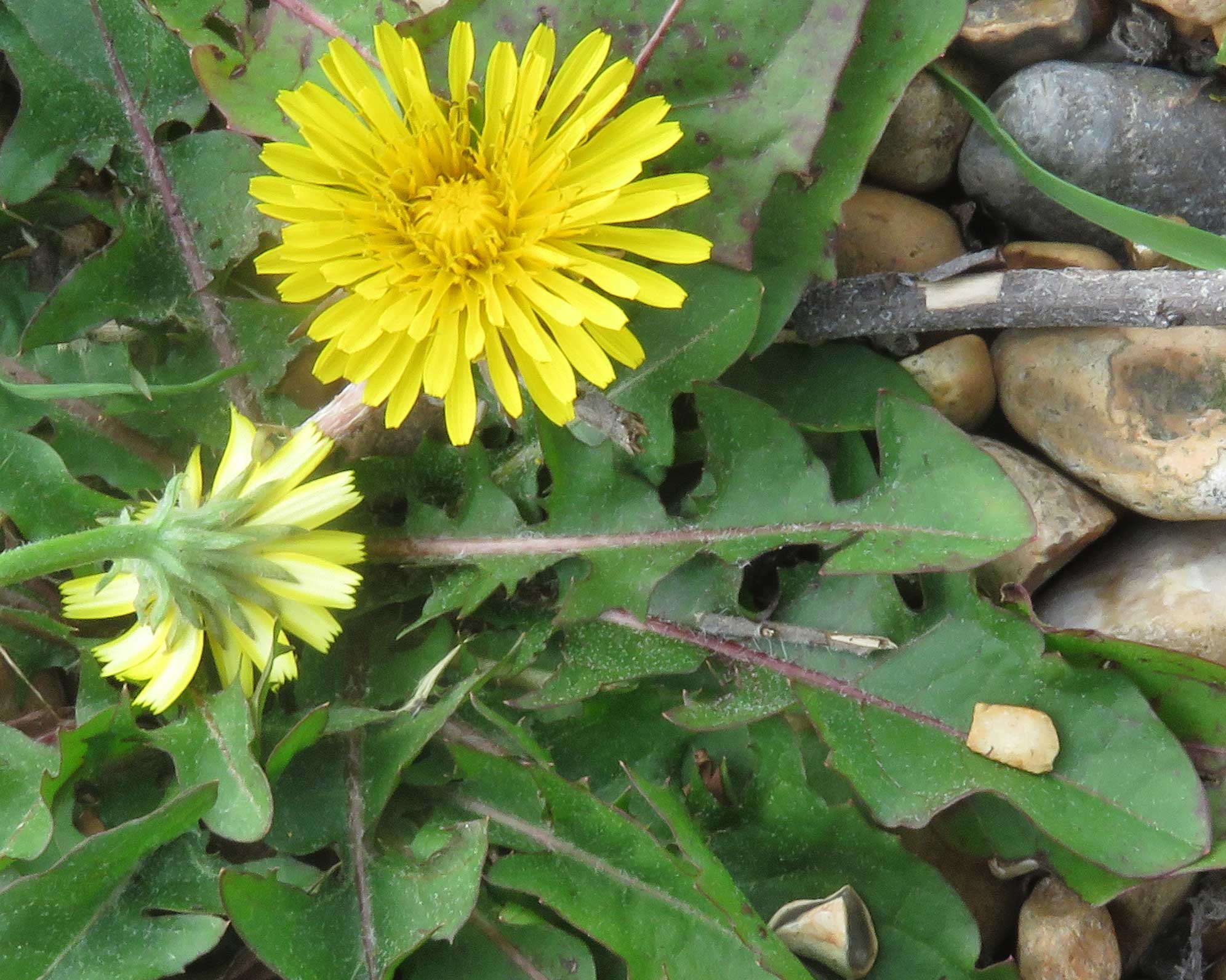 Oxford Dandelion
Next to Widewater Cyclepath 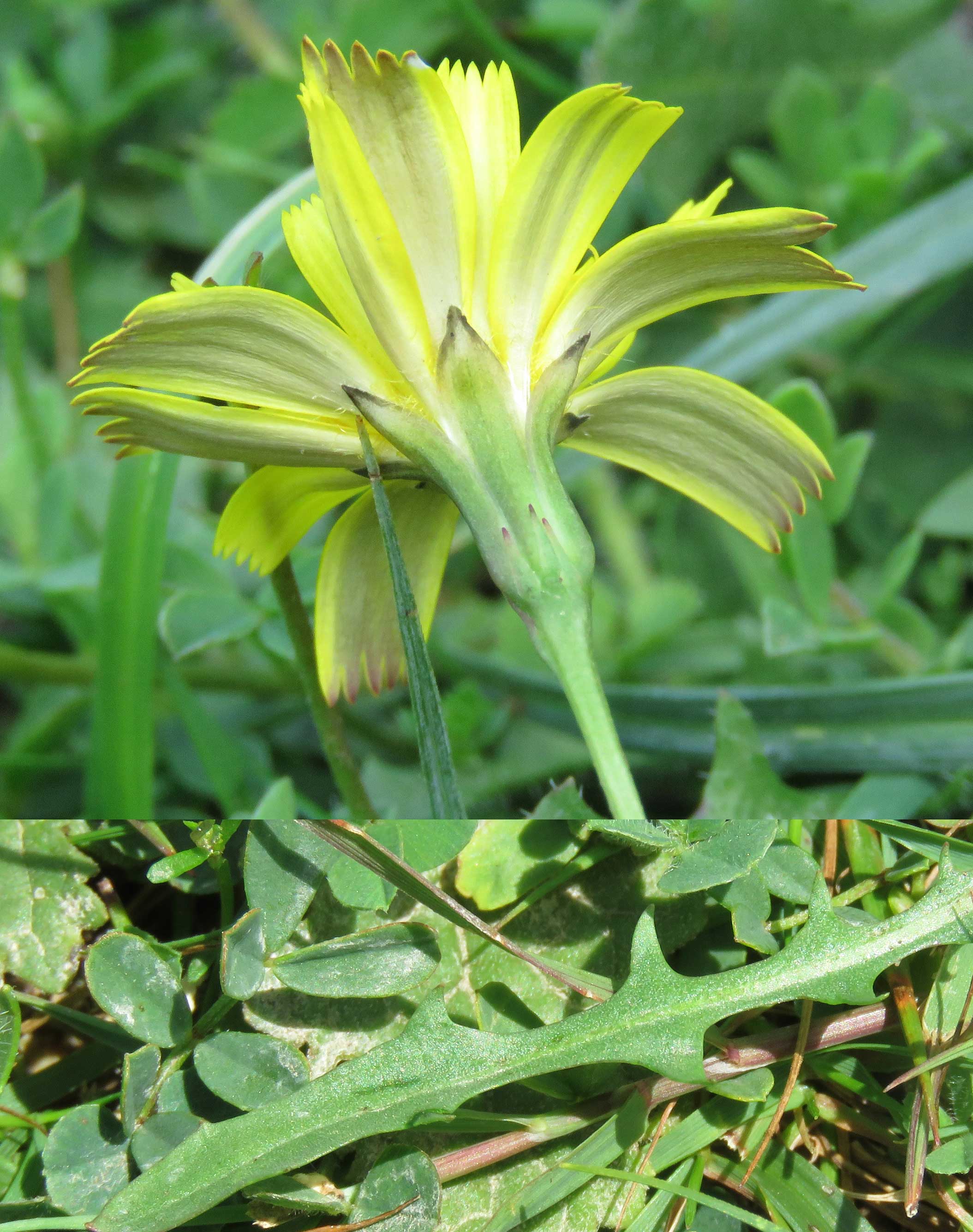 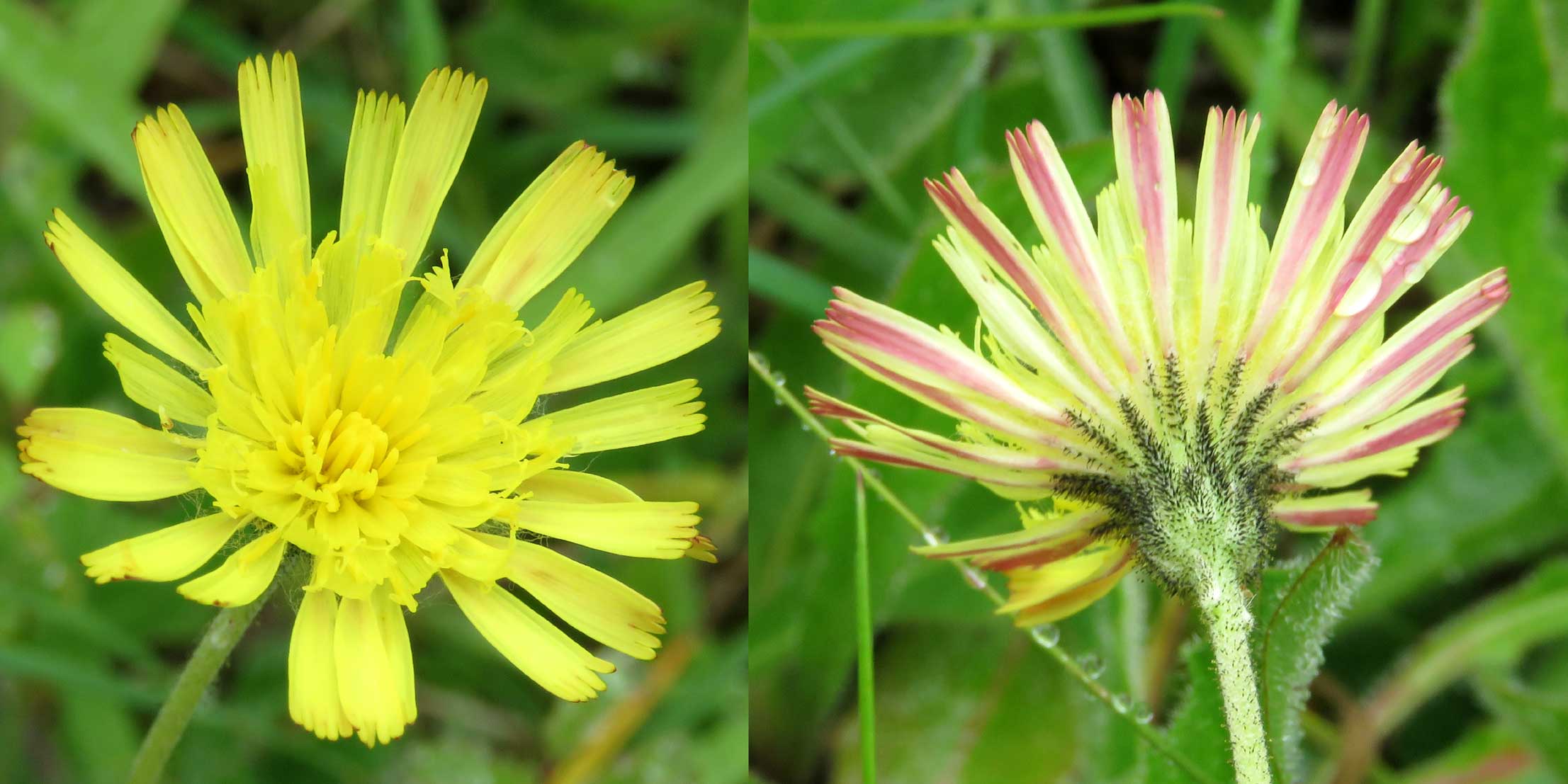 Centre: " In Scorzoneroides autumnalis (the current name for L. autumnalis) the stalk is swollen and hollow at the apex, the involucral bracts are irregular, and stem leaves are absent. This has two whorls of bracts, the outer much smaller and appressed to the inner, which matches Crepis capillaris. Crepis capillaris commonly has stem leaves, but these may be absent from small or mown plants; there is a depauperate one present here." 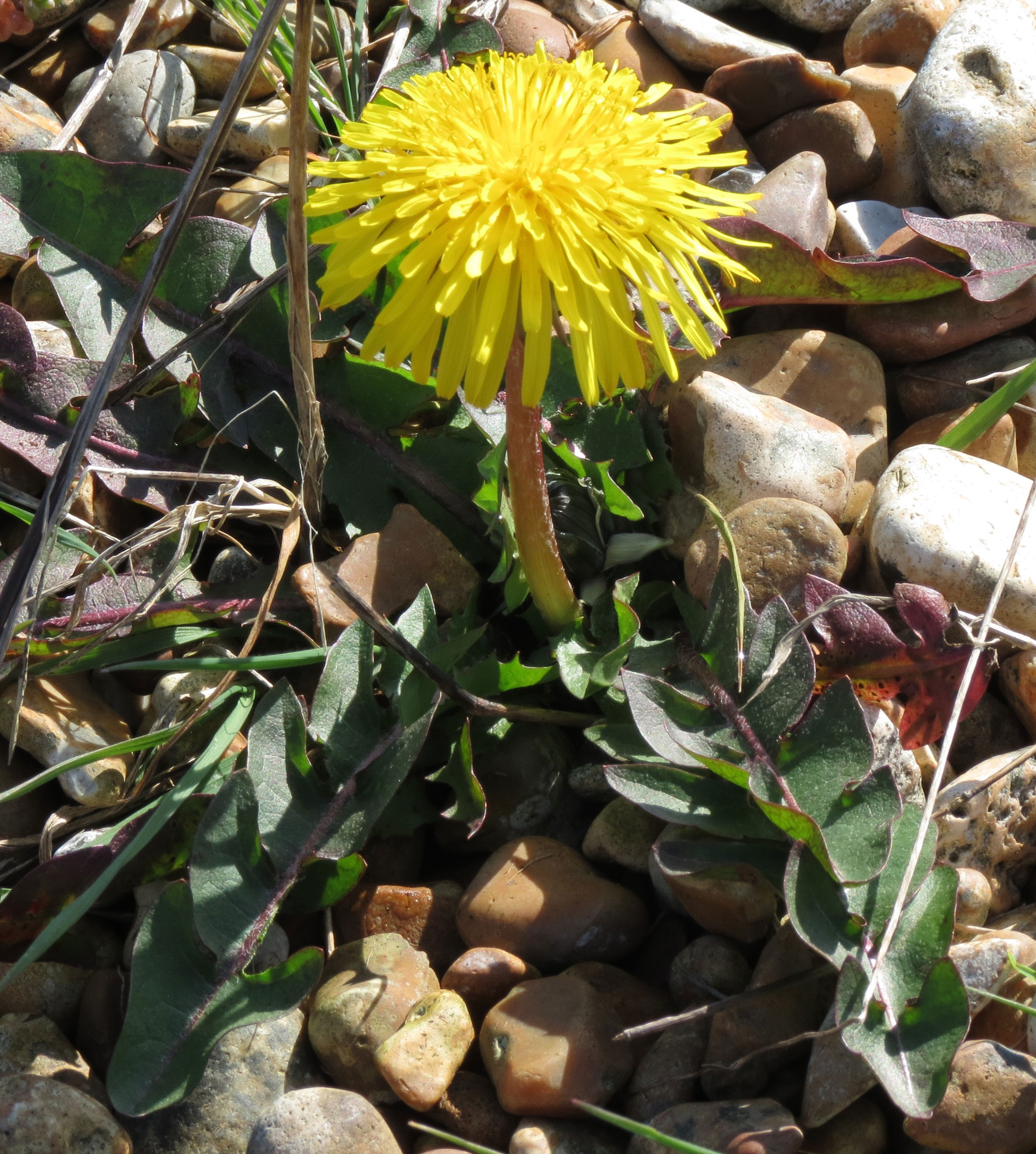