>
> How long can a cnidarian live? Depends on how you define "a cnidarian".
> Some corals living today may be over 1000 years old and corals living in
> the past when sea levels were more stable may have lived many times longer
> ( Potts, D.C. 1984. Palaeobiology 10, 48-58). A coral colony can be
> considered equivalent to "a cnidarian" as the polyps are all parts of the
> same genetic individual spread out in time and space.
> George.
>

Anemones indeed are anecdotally known to live to be "monstrously old".
There is the tale of an anemone kept as a pet at the University of
Edinborough that lived from sometime in the mid-1800s until around the
1960s.  She (her name was Gertie, I think - this is where the apocryphal
part begins) didn't die of old age, rather when a janitor (or perhaps a
botanist?!) failed to maintain the seawater system over a long weekend.
I recall that this story may be retold in Ricketts and Calvin.

Other anecdotal evidence comes from Bob Paine's monitoring of large
solitary individual anemones (Urticina crassicornis and Anthopleura
xanthogrammica) in the field at Tatoosh Island, Washington from 1968 or so
to today, with no appreciable chance in position or size.  Many people
have kept anemones in the lab for many years, also with no evidence of
aging (e.g. John Pearse has kept Anthopleura artemisia at UC Santa Cruz
for a decade or more).  Also, Paul Illg is said to have transplanted two
A. xanthogrammica to a tidepool on San Juan Island many decades ago, and
they are still around.

Finally, I think Ken Sebens did some demographic projections on survival
rate data for Anthopleura xanthogrammica (a large solitarly species), and
found that the average age at Tatoosh Island was something like 500 years,
and that one individual may have been around since the Pleistocene (these
very rough estimates based on the vanishingly low mortality rate during a
6-year field study).

I think at the cellular level there is little or no evidence of senescence
in anemones, and as George Mackie pointed out, genotypes of clonal
anemones may live indefinitely, even if the odd polyp dies from predation,
disease, or even old age.  That's all I know - I'm interested in what
others do!

How long can a cnidarian live? Depends on how you define "a cnidarian".
Some corals living today may be over 1000 years old and corals living in
the past when sea levels were more stable may have lived many times longer
( Potts, D.C. 1984. Palaeobiology 10, 48-58). A coral colony can be
considered equivalent to "a cnidarian" as the polyps are all parts of the
same genetic individual spread out in time and space.
George.

Speaking only for jellies and polyps, I only know of two "really old" examples:
1) Lambert started a culture of Aurelia in 1935. In approx. 1965, he gave a
portion of this culture to Dorothy Spangenberg, and she in turn gave Cabrillo
Marine Aquarium some in 1994. By rough math that puts it at about 65 years old
if it is stilll going!
2) Single medusae: In about 1995 or 1996 Freya Sommer told me that some
particular medusae in her tank were at least 7 years old (or maybe 9?, but I
think she said 7 -- I could check my notes). They were still large medusae in
the tank, but I believe they were no longer tracked once she left. Mike Schaadt
at Cabrillo Marine Aquarium told me recently that he had one that he knew was
at least 6.

As for a single polyp, I ran an experiment a few years back to see, and
unfortunately it was destroyed before the answer became known. At the time the
petrie dishes went belly up, single polyp cultures, whihc had been continuously
culled for buds, were 10 1/2 months old and still going strong. IN that time,
each of 3 stobilated twice and produced approximately 60 buds. Details are in
forthcoming in print.

I have heard stories of monstrously old anemones, but I know no details.


As for jellyfish, the oldest I know of would be probably be at Monterey Bay
Aquarium, as Lisa Gershwin has already stated-these animals (Aurelia) would
be about 11-12 years old if any of the originals are still around.  Else,
Oregon Coast Aquarium has had some of theirs in their cylinder tank since
they opened, making them at least 8-9 yrs.
It has been suggested that some tropical anemones live to 100 yrs or so and
their cold water conterparts even longer.
If you count corals colonies as individual animals, then probably 1000's of
years.  Of course one would have to define if a coral colony is an individual
cnidarian or a mass of individual polyps.  Is a "clone" part of the same
animal, or an entirely new individual with equivalent genetics, I'm not sure
on that one.


As I remember, the zoantharian Gerardia off the Californian coasts was dated
as the longest living metazoan, approx 2100 (or 2700?) yrs (± 300 yrs) by
radioisotope analysis of a small colony branch. I am sorry I cannot tell you
much more about that paper except that it was in journal within the field of
earth sciences, that the authors did not identify the species, and that it
should be appeared in 1997.  I will look for more details about that paper,
sorry if I can't do right now, but you may try by yourself by BA, CC, ASFA
and so on.

Again, I only have personal experience to go on here, but I have maintained
existing medusa of Aurelia aurita for 5+ years. I have numerous
scleractinian species such as Platygyra, Trachyphillia, Pleurogyra that have
lived for at least 9 years. I also have a number of SPS corals like
Montipora and Acropora that have lived at least 5 years. Since none of these
organisms seems to show signs of 'getting old', and all are actively growing
appear healthy, I surmise this trend will continue for some time barring
husbandry or environmental problems in their systems.

I suspect others in the public aquarium sector can confirm that many corals
have lived for many years in captivity, along with certain anemone species
barring husbandry issues. In captivity, I would feel confident the leading
cause of death is husbandry related, rather than natural lifespan of the
animals.

Aspartic acid racemization and amino acid composition of the organic
endoskeleton of the deep-water colonial anemone Gerardia: determination of
longevity from kinetic experiments

An age of 250 (±70) yr is estimated for a specimen of the colonial anemone
Gerardia collected alive from 630 m depth off the Bahamas. This age is
calculated from (1) the difference in aspartic acid (Asp) racemization
measured in the outermost (youngest) and innermost (oldest) layers of the
trunk of the organic endoskeleton of the specimen and (2) the estimated
rate of Asp
racemization, as extrapolated from heating experiments. The estimated age
(250 yr) is much younger than that suggested by radiocarbon measurements of
the specimen (ca. 1800 yr). The amino acid composition of the endoskeleton
of Gerardia is unusual, with histidine comprising 30% of the total. The
composition resembles proteins of the endoskeleton of antipatharians (black
corals). 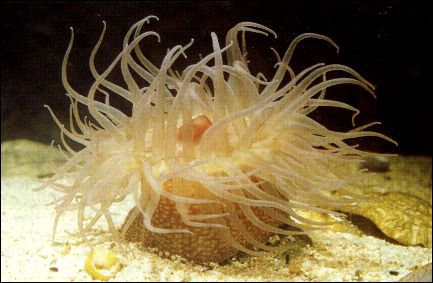 More seriously, there is circumstantial evidence that a British sea-anemone
population has been unchanged for more than 200 years and possibly has the
same individuals in (me, unpublished); and I think it was T A Stephenson
(1928, 1935) who cited George Johnston (1847) as having kept some Actinia
for most of his life and passed the cultures to someone else who kept them
for a further few decades.  Someone else left a culture of Actinia in a
tank that received no attention while he went to do service in WW2, and
they still survived in hypersaline conditions in the tank - don't know the
reference.  I think in Prosser & Brown a culture of Hydra is mentioned that
was kept for many years at gradually raised temperatures but which died
when someone unplugged the heater one evening.  No doubt others, and surely
the 'coral' groups beat the lot.

Of course this discussion introduces the semantic problem of what
constitutes a cnidarian individual, what with clonal animals and organisms
that generate new cells in the midriff and slough them off at the
extremities. By the way does anyone know if  sloughing of cells is
restricted to the Hydrozoa or do the other 2 classes also do this?  Lets
imagine that you could put a persistent, cytoplasmic marker (not a genetic
marker) in all cells of a newly attached anthozoan polyp and then come back
in 200 years, would any of the cells have the label?


One may also be interested in the following reference,
where hydra was found not to age over a four year span -
obviously not very long but quite significant given
the generation time of hydra.

Senescence, a deteriorative process that increases the
probability of death of an organism with increasing
chronological age, has been found in all metazoans where
careful studies have been carried out. There has been much
controversy, however, about the potential immortality of
hydra, a solitary freshwater member of the phylum Cnidaria,
one of the earliest diverging metazoan groups. Researchers
have suggested that hydra is capable of escaping aging by
constantly renewing the tissues of its body. But no data
have been published to support this assertion. To test for
the presence or absence of aging in hydra, mortality and
reproductive rates for three hydra cohorts have been analyzed
for a period of four years. The results provide no evidence
for aging in hydra: mortality rates have remained extremely
low and there are no apparent signs of decline in reproductive
rates. Hydra may have indeed escaped senescence and may be
potentially immortal.