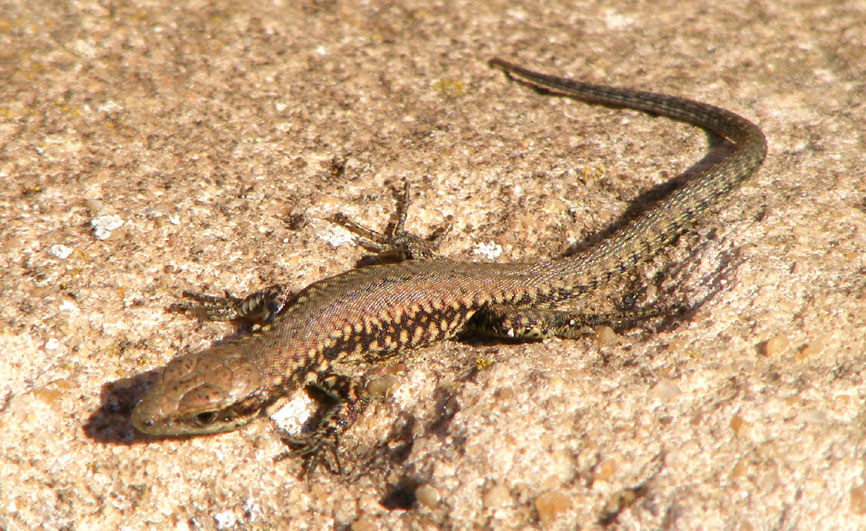 On a pleasant (17.3 °C) beginning to October with a Light Breeze (Force 2) blowing form the NNW (N veering to NW), I spotted seven Wall Lizards, Podarcis muralis, at the Old Fort (at the far eastern end of Shoreham Beach) with only a cursory attempt to look for them. The afternoon visit discovered two adults on the walls followed by two juveniles. Later when examining a small clump of flowering Sea Thrift, three or more further juvenile lizards were spotted skitting amongst the rocks and vegetation.  One of the adults was recognised as the one in the photograph below.
Adur Lizards


17 September 2009
A visit to the sand and rocky shore at Lancing Beach Green west on a 0.7 metre low spring tide was unrewarding (my heart wasn't in it) and the only thing of note was empty shell of the Shore Urchin, Psammechinus miliaris, which was notable because I have not seen a live one on the local shores for several (over ten) years. There were a few undersized Edible Crabs, Cancer pagurus, a small Hairy Crab, Pilumnus hirtellus, at least one medium-sized Shore Crab, Carcinus maenas, one small newly moulted (soft) Velvet Swimming Crab, Necora puber, and one small Hermit Crab, Pagurus bernhardus, in the gastropod shell of a Netted Dogwhelk.
BMLSS Crabs

15 August 2009
While running the rockpooling event for Friends of Shoreham Beach we discovered amongst other things a dead Compass Jellyfish. This was on the beach behind the Old Fort.

August 2009
Two families of Mute Swans are resident on Widewater Lagoon every year. One morning an adult female Mute Swan was found dead. The cause is unknown but predation by a Fox is suspected. The cygnets will be able to fend for themselves with the male still in attendance.

Report by Lancing Parish Council and World of Widewater

24 July 2009
The high spring tide nearly reached the green band of Orache on the shingle south of Brooklands Boating Lake, east Worthing. Unnoticed at first, a flock of about 25 Turnstones took flight as I got close. The incoming waves churned over a brown mass of loose seaweed.

26 June 2009
A Privet Hawkmoth was photographed on Shoreham Beach.

25 June 2009
A metre long Bluefin Tuna, Thunnus thynnus, jumped 30 cm clear of the sea in the vicinity of a fishing boat seven miles off Shoreham-by-Sea, Sussex, in the early afternoon on a sunny day. It was speculated that this tunny (which is now rare in British seas) followed the large shoals of fish in, which in turn attracted the fishing vessel. "As it left the water I was able to catch sight of its gleaming multi-coloured sides of the the torpedo-shaped fish and the small pre-caudal triangular finlets appeared dark blue. Its weight was estimated to be about 12 kg."

In the late afternoon, twoWall Lizards, Podarcis muralis, were seen on the flint walls of the Old Fort, Shoreham Beach. Both were green intact adults and the first one stayed around long enough for a photograph.
Adur Lizards

Near the Old Fort, the expanse of Starry Clover, Trifolium stellatum, flowering was coming to an end. Childing Pink, Petrorhagia nanteuilii, was present in small numbers, all with single flowers in their usual place in a small patch at Silver Sands. At least three 6-spot Burnet Moths were seen by the Old Fort in the late afternoon.

14 June 2009
Over the Riverbank towpath by the houseboats, I observed two Small White Butterflies and a Red Admiral. On the flowering Shoreham Beach south of Winterton Way, there were two more Small Whites and a Painted Lady, and at least three more Painted Ladies were seen flying over the beach.
Full Butterfly Report 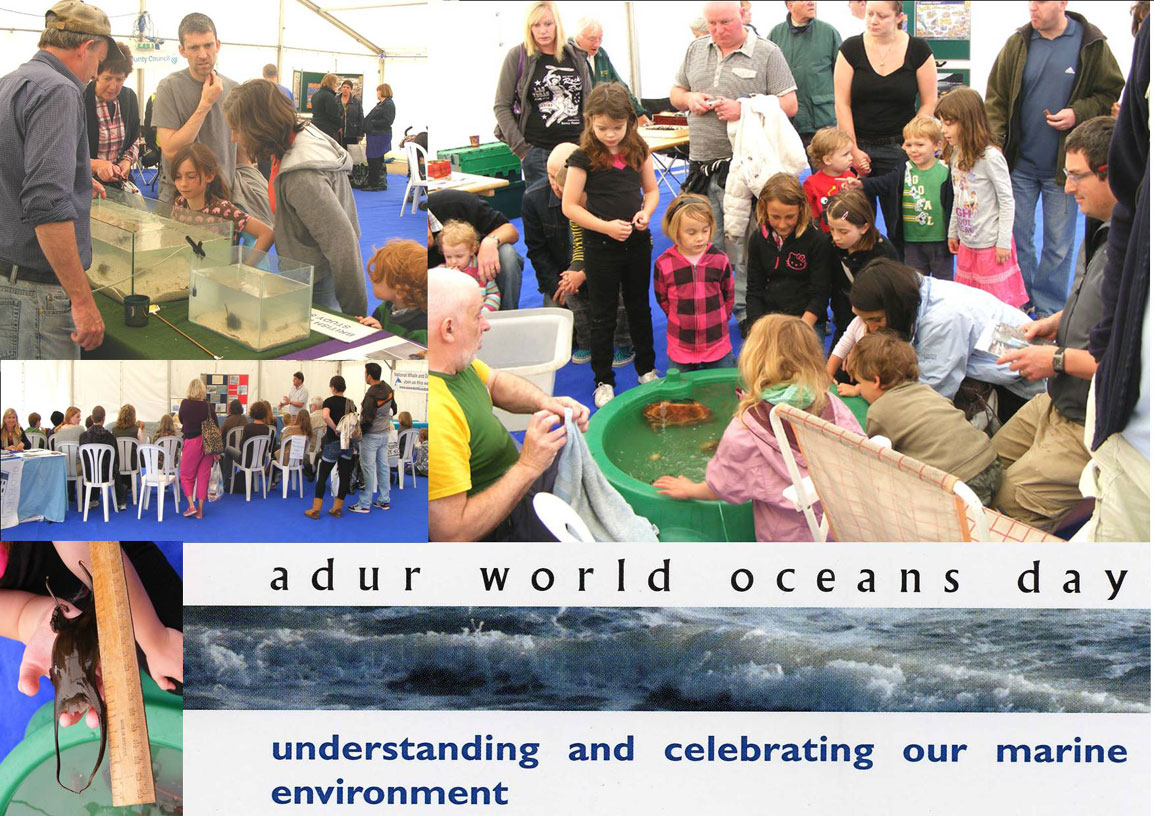 
Adur World Oceans Day took place in the marquee on Coronation Green on 6th June 2009 on the opening Saturday of the Adur Festival. Len Nevell was there with the usual exhibition of lobsters and crabs. The innovative aquarium displays of seashore life, strandline exhibits and photographs will again be in on show. Experts will be on hand to answer your queries about life in the oceans and on the seashore.

The Friends of Shoreham Beach played an important part with their own displays and information about the Nature Reserve and plants of the shingle beach.

World Oceans Day was declared at the Earth Summit in 1992.

On the south side of the Shoreham Harbour Power Station chimney, just above the nest box, a female Peregrine Falcon perched on one of the ledges. It could be identified to gender by its greater size than the male of the species.
Silver Ragwort in flower on Southwick Beach (east of Carat's Cafe) was a new addition to the flora list in flower this year. 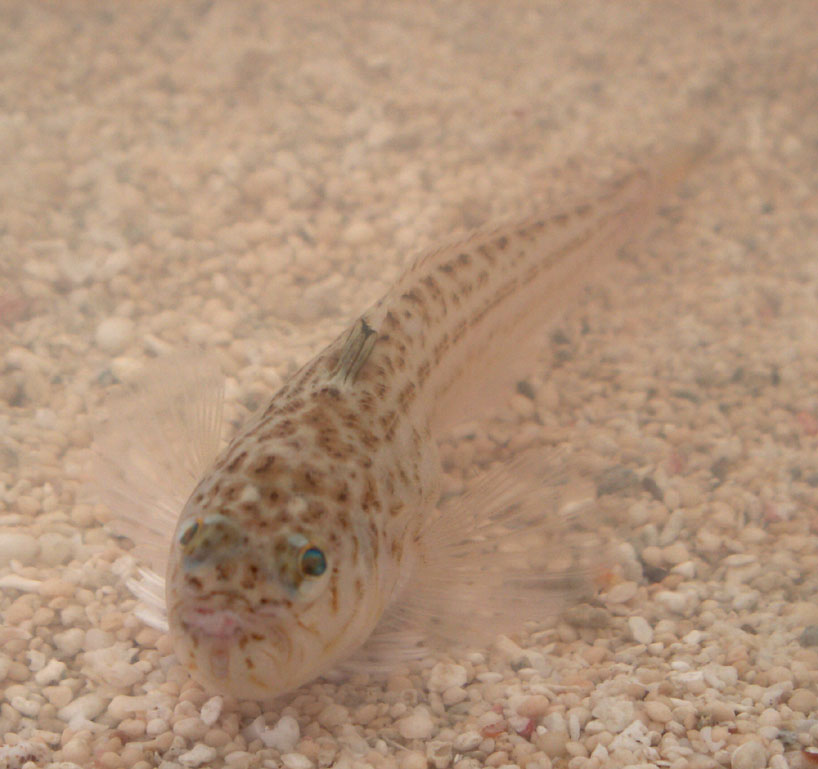 29 May 2009
Shrimping was possible after some poor weather. And the conditions were ideal off Lancing Beach (near the Church of the Good Shepherd) but the haul of Brown Shrimps, Crangon crangon, amount to about thirty all after the tide turned and with the incoming tide. Luckily (because the expedition was to get exhibits for Adur World Oceans Day 2009) the haul with my smaller U-shaped net including two medium-sized Lesser Weevers, Echiichthys vipera, amongst the weed so I had to be careful of the venomous fins, two adult Sand Sole, Pegusa lascaris, one intact Vernal Crab Liocarcinus vernalis, half a dozen flatfish (probably Plaice) fry, one small Plaice, two South-clawed Hermit Crabs, Diogenes pugilator, one swimming crab Portumnus latipes, and a very young Greater Pipefish Syngnathus acus. A Painted Lady Butterfly fluttered around my head.

26 May 2009
Moon Jellyfish, Aurelia aurita, were seen in Shoreham Harbour as is usual at this time of the year.

25 May 2009
A brief rockpooling foray in the early morning to Kingston Buci Beach, east Shoreham, was much more productive than the previous day.  A more promising start was found with frequent (enough for a meal) large Prawns Palaeamon serratus, at the Chart Datum marker, and in the net came a capture of a Corkwing Wrasse, Symphodus melops , an adult Blenny, Lipophrys pholis, and two smaller ones, with a medium-sized Bullhead, Taurulus bubalis, and one small Moon Jellyfish, Aurelia aurita. Turning a few rocks uncovered a small Edible Crab Cancer pagurus, two juvenile Rock Gobies, Gobius paganellus, two more Blennies, and at least one of the tiny shrimp-like crustacean Athanas nitescens. Oysters and the usual molluscs were present. I noted the largest expanse of the eggs of the Dogwhelk, Nucella lapillus, since I began recording on this beach in 1979. This was clear evidence of recovery since TBT pollution. A few (at least two) large grey specimens of this gastropod were seen on the mussel beds. A few live Cockles were lying about the surface of the sand. A Little Egret was feeding on the tideline to the east.
The purple variety of Goat's Beard was just beginning to open in flower on Kingston Buci Beach. 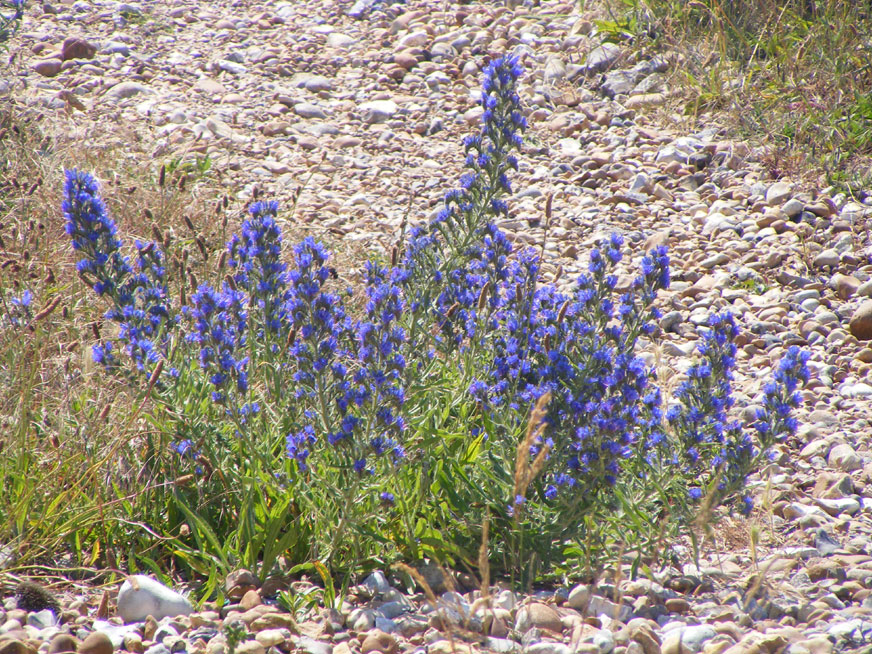 23 May 2009
Shoreham Beach (especially over the border in Lancing to the west of the Church of Good Shepherd) was covered in swathes of flowering Red Valerian and Sea Kale and Viper's Bugloss was in flower (first time noted this year although flowering must have occurred for at least a week) plus the first Slender Thistle in flower this year.
On Widewater a pair of Mute Swans had a handful (I did not count them) of cygnets.

The early evening shrimping expedition at Lancing was exceptionally poor registering just half a dozen Brown Shrimps, Crangon crangon, with most of them too small and one large one escaped through the net meshing. Incidental captures were exiguous: three very young Greater Pipefish Syngnathus acus,  three* Sand Sole, Pegusa lascaris,  two one-clawed Vernal Crabs Liocarcinus vernalis,  half a dozen flatfish (probably Plaice) fry, one South-clawed Hermit Crab, Diogenes pugilator,  and a Lesser Spotted Dogfish Scyliorhinus canicula purse with an embryo. There was a much darker brown different pipefish that escaped the net. This could have been either a juvenile Worm Pipefish Nerophis lumbriciformis, or even a juvenile Snake Pipefish Entelurus aequoreus. A clump of the black grape-like Cuttlefish eggs were discovered washed up on the strandline.
(*One was damaged and released and another one swam out of the net.)

11 March 2009
My first reptile of 2009 was one of five Wall Lizards, Podarcis muralis, basking for a brief view on the south-facing flint surround wall of the Old Fort, Shoreham Beach, before skitting off into the grass growing up next to the wall. Two of the lizards were grey coloured small juveniles.

9 March 2009
A male Pheasant strutted over the shingle beach immediately to the east of the beach huts on the south side of the road by the Church of the Good Shepherd on the Shoreham-Lancing border. It was a surprise location to disturb a Pheasant which then flew off over Widewater towards New Monks Farm.

12 February 2009
An immigrant male Merlin landed on a pylon* near the Power Station Chimney in Shoreham Harbour (by Southwick Beach) and it was quickly pounced upon by one of the resident Peregrine Falcons. "I saw one of the Peregrines hurtling towards
the pylon with my naked eye. I looked straight back through the scope, expecting to see an almighty tussle, but incredibly the Peregrine was perched on the Merlin, the latter still struggling and flapping wings, and the Peregrine keeping balance with wings outspread. After one unsuccessful attempt at flying with its prey still putting up a fight, the Peregrine managed to subdue the Merlin and flew away further into Southwick somewhere (being lost behind the houses) still clutching the Merlin.
(*A frequent perch of one of the two resident Peregrines.)

Report by Jan on the Sussex Birds Yahoo Group 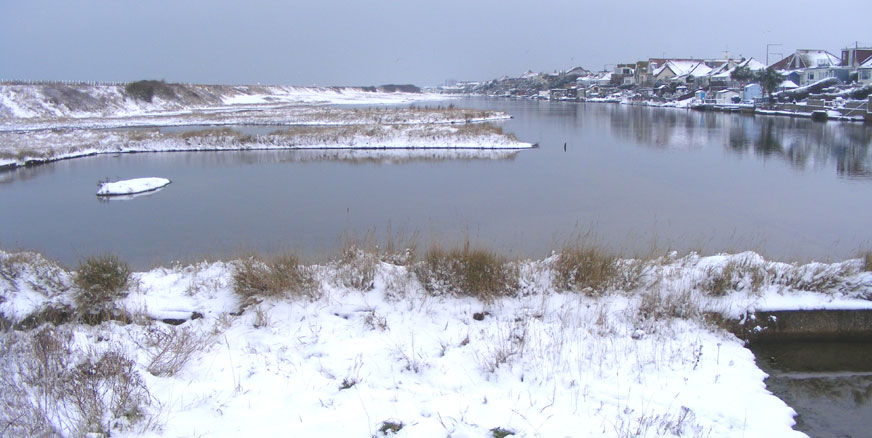 29 January 2009
A couple of Stonechats were seen amongst the bare twig bushes south of the bridge over Widewater Lagoon.

28 January 2009
An Iceland Gull, Larus glaucoides, was seen at 8:50 am on Southwick Beach just west of the power station. It was a large individual with a pretty large bill. It was seen again by Carat's Cafe at 10:00 am.

19 & 20 January 2009
Two pairs of Red-breasted Mergansers dived underneath the surface of Widewater Lagoon. 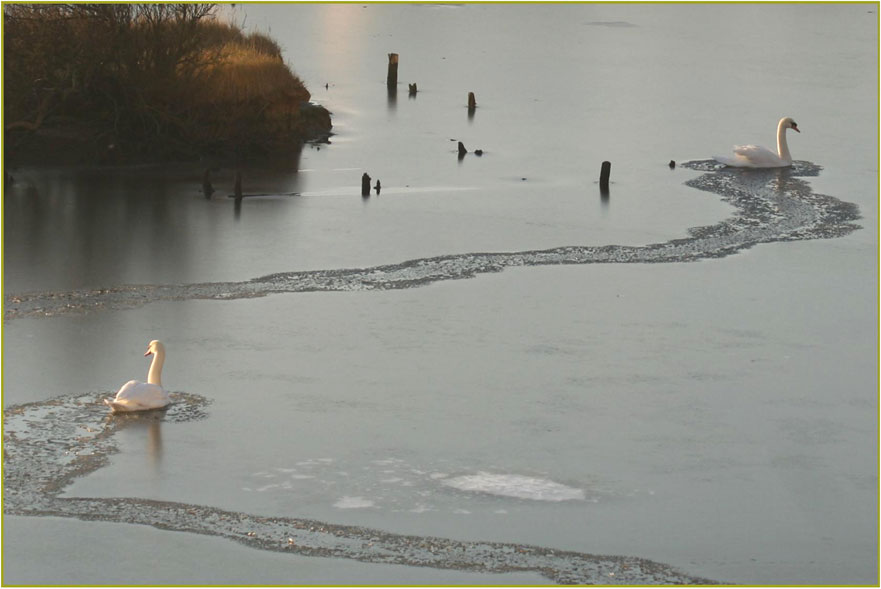