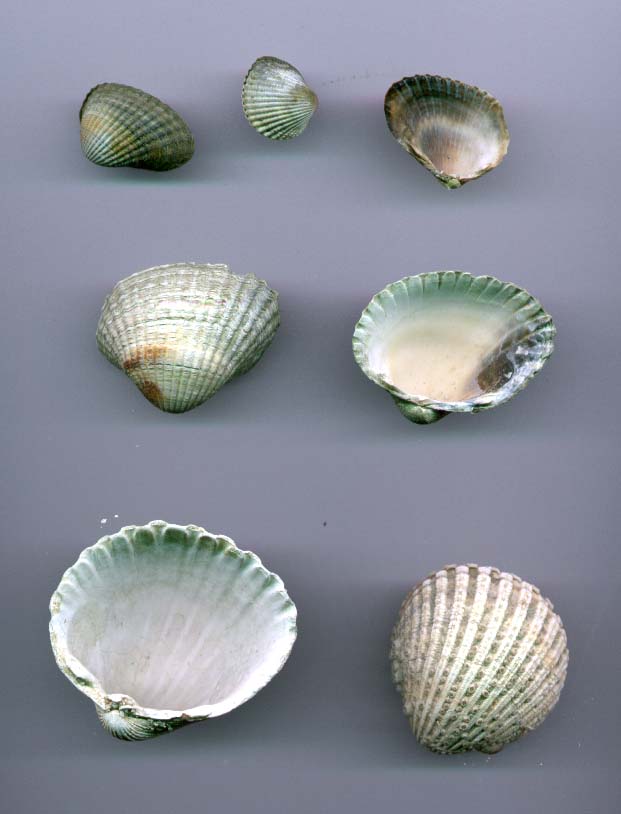 Cockles from around the British Isles.


Top: the small specimen is the Lagoon Cockle, Cerastoderma glaucum.

Cockling is called "trigging" in Cornwall.

A bylaw proposed to prevent gangs of tractor-riding shellfish harvesters from exploiting Cornish estuaries will apply to everyone from the hand picker to the commercial operator.

The new law is the idea of the Environment Agency, which is concerned about decreasing numbers and sizes of cockles collected from sites such as the Helford and Camel estuaries.

The agency's James Burke said the bylaw would make it illegal to take cockles smaller than 20 mm in diameter (roughly the size of a 20p piece), restrict harvesting by mechanical means and ban cockling in the summer.

The rules would apply to everyone and to all Cornish estuaries, but the idea was to favour hand-pickers above commercial gatherers.

"We are not by any means stopping the collection of cockles, but trying to make sure they are harvested in a sustainable way," he said.

The move could prove controversial on the Helford Estuary, where each year on Good Friday, dozens of people gather for the traditional "trigging" event. 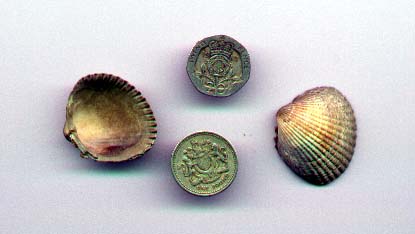 If the bylaw is passed, fisheries protection officers would be on duty at the Helford to make sure people did not take cockles which were too small. Their role, however, would be more of an educational than enforcement one, said Mr Burke.

The Environment Agency is asking cockle-pickers to help protect stocks by leaving any that are smaller than a 20 pence piece. They should be pushed back into the sand in the same place they were found. Cockle populations are most vulnerable from Easter until the end of summer ­ this is when they breed, releasing spats, tiny larvae, which eventually settle into the sand and grow shells. 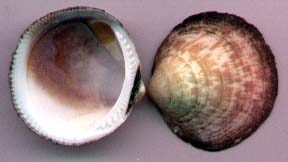 Glycymeris glycymerisi s NOT a true cockle,
although in many books it is known as the Dog-Cockle


9 July 2002
Live small cockles (new recruits of a breeding population) have now been discovered at depths of 20 cm in Widewater, Lancing, West Sussex, which was about a metre deep near the bridge. This is the Lagoon Cockle, Cerastoderma glaucum, although when the cockles are small (12 mm width) they do not have the shape of the full grown ones, so they initially looked to me like Common Cockles, Cerastoderma edule. Actually, whilst they are alive there does not seem to be an easy way to distinguish them as it is the interior groove differences that are diagnostic. The shell is thinner and the Lagoon Cockle is brittler and the live shell can be easily prised open with a fingernail which is much harder with the Common Cockle, even small ones. The Shore Crab, Carcinus maenas, would find these shells very easy to crack open.

Notes by Gerard Heerebout
8 July 2002
At least one live Lagoon Cockle, Cerastoderma glaucum, is discovered in the mud samples taken from deeper water yesterday.
Report by Dan Metcalfe (University of Brighton)
7 July 2002
The trip in the unseasonal drizzle to Widewater Lagoon, ostensibly in the search for the sea anemone Edwardsia ivelli, but actually the collection of anaerobic mud and hundreds of dead shells of the Lagoon Cockle, Cerastoderma glaucum, with just the remotest long shot that something interesting would creep out. The black mud substrate was collected at two locations one west of and one east of the bridge on the shallow edge of the deepest bits of the lagoon. After the recent rain, the lagoon was still appreciably filled and showed no signs of drying out that can occur in hot summers.

The failure to discover even one live cockle was disappointing. My initial thought that it was because of an accumulation of silt that caused thousands of the cockles to die. Another possibility was that the collection area had actually dried out completely during a recent dry summer and the mass mortality was because of desiccation.
"As some lagoons are prone to ephemerality it is in their nature to experience wide fluctuations in populations of species.  When I have recorded Cerastoderma glaucum at sites I have almost always found many many more dead shells than living. There is a member of Conchological Society in the Portsmouth area who has observed see-saw colonisation of suitable habitat for Cerastoderma glaucum locally and was talking to me about this at a meeting recently."

Comment by Jan Light on UK Conchology
Marlin on C. glaucum
The specific gravity reading in the main channel was about 1.021 at 16° C which gives a salinity of about 29 (ppt) which is into the high brackish range that could support cockles and other marine organisms.

Cockle
[ME. cokille, a. F. coquille (OF. also cokille) shell, = It. cocchiglia cockle-shell:L. type *cocchilia, *cocquilia, by-form of conchylia, pl. of conchylium (conquilium in a Gloss.), a. Gr.  small kind of mussel or cockle, dim. of  =  (whence L. concha and by-form *cocca) mussel or (perhaps) cockle. With the English shifting of the stress, cokille has become cockle, like gentille, gentle, etc.]

1. The English name of bivalve molluscs of the genus Cardium, esp. C. edule, common on sandy coasts, and much used for food. (Formerly applied more vaguely, including other bivalves.)   OED

Cockles of your Heart 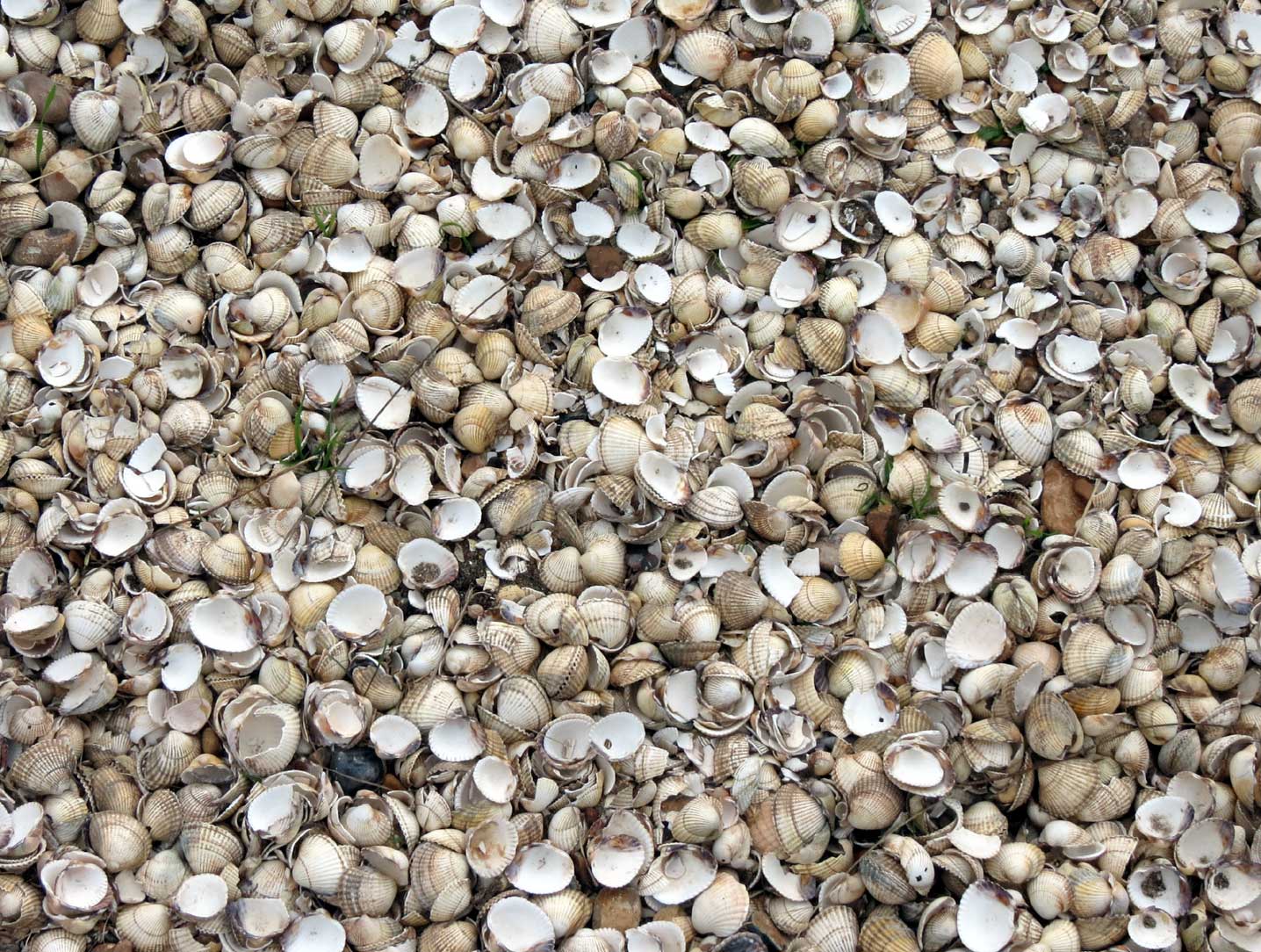