The Crangon allmanni and Crangon crangon are generally sandy towards grey,
but the Pontophilus spp and Philocheras spp - which may well be undergoing
name changes always feature turquoise/green patches - it was our best way of
seperating them when studying trawls.  The small spines on the carapace
(which distinguish the animals) do not show up on photographs and are very
difficult to see with the naked eye. 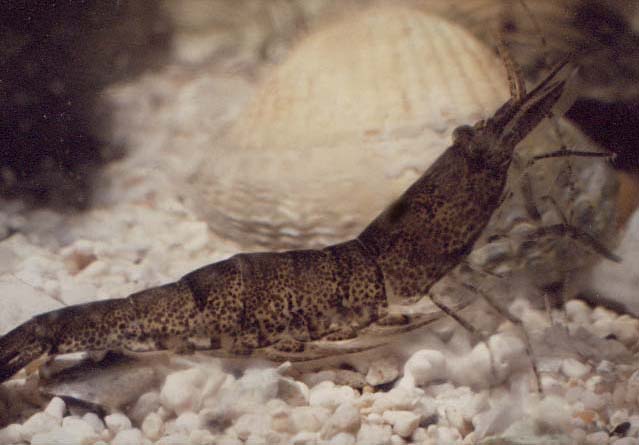 To add to Marie's comments. At sea, in my experience, freshly caught
Crangon allmanni are usually notably more ginger in colour as compared to
the sandy grey of the common shrimp C. crangon. Mixed catches do not happen
very often as they separate by depth, but the two can be quickly split on
the deck of the boat on the basis of colour. By holding C. allmanni to the
light, end on, the diagnostic dorsal groove on the last pleon segment can
be seen with the naked eye even in quite small individuals. The colour
difference between the two Crangon species can sometimes be detected even
in shrimps in fish stomach contents if digestion has not advanced too far.

>Shrimps
>http://www.student.uib.no/~st00502/images/gall3/macronor/mac2.html
>
>I have never seen Crangon with colours other than brown changing to sandy
>colour depending on the colour of the substrate or whether it is night or
>day.

I've never seen any Crangon (or Pontophilus) with anything even
resembling that coloration either. Also the habit, sitting on what
appear to be an urchin test, and body shape, to me suggests that this
isn't Crangon. If I was to hazard a guess... Philocheras?

If whomever posted that pic could post more pics of the shrimp that'd
help - it's a nice pic, but I can't make out much detail.

Philocheras, if that's what it is, seem quite rare here in Sweden.
It'd be interesting to know if they really are common in Norway.