25 May 2006
In my last visit to the garden at The Drive in north Shoreham, I discovered that there were two resident Painted Lady Butterflies, one intact and the other one worn with one chunk out of each its wings.

Again it was the "Boules Mauve" Wallflower that attracted these butterflies and also a Red Admiral, Large White and a Small White Butterfly, A Holly Blue Butterfly flew around the garden but did not seem to settle. The Painted Ladies were later seen courting in mid-air.
Butterfly Report for the Day

Whilst I was in the garden, no birds stopped to perch. A Blackbird a Starling and then three Wood Pigeons flew over. Later, two large Crows and then a Swallow flew overhead and the Rooks could be heard from the fir tree in the road outside. A Red-tailed Bumblebee, Bombus lapidarius, visited the wallflowers. 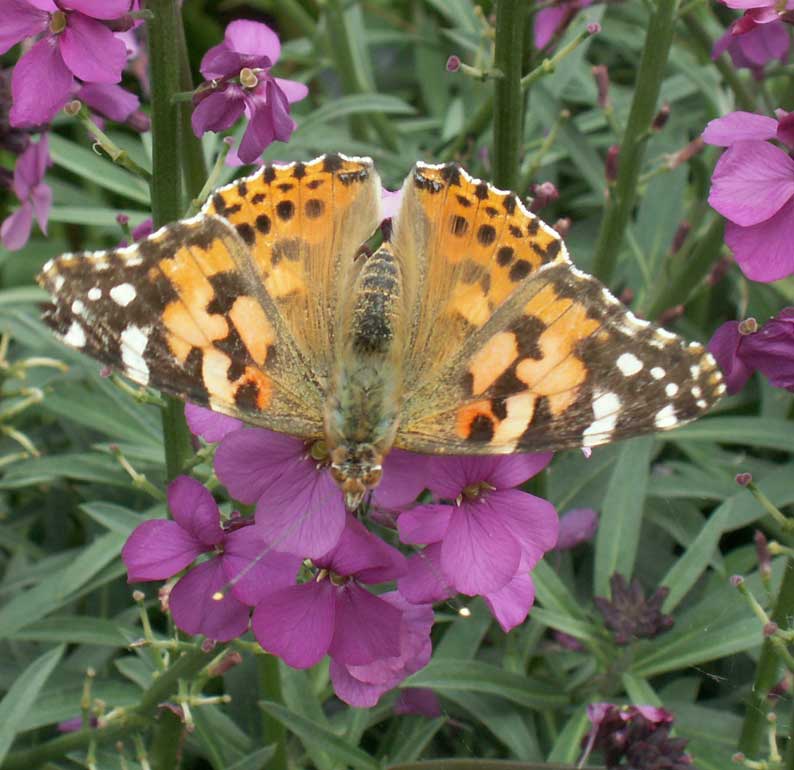 24 May 2006
It probably the same Painted Lady Butterfly as before that landed on the wallflowers in a north Shoreham garden, followed later by a Small White Butterfly. This time the Painted Lady was faded with a large chunk missing from one wing.

18 May 2006
My first Painted Lady Butterfly of the year landed on a wallflower in a north Shoreham garden.
Butterfly Report

The Large White Butterfly was my first of the year and the first one recorded in the Adur area. There was a lot of flying insect life with a large wasp, possibly a German Wasp, Vespula vulgaris, a Large Red-tailed Damselfly, and scores of hoverflies including twenty plus Rhingia campestris, and Syrphus and  Epistrophe eligans.  A Holly Blue Butterfly would not settle. A Small White Butterfly was noted and a spider amongst many. The two bees photographed above need checking for their identity.  I think the first one is a Red Mason Bee, Osmia rufa,  and the second one is a Leaf Cutter Bee, Megachile sp. The orange bee was a keen visitor to Bluebells. Bumblebees were noted including Buff-tailed and Red-tailed.

5 May 2006
A glimpse of orange-red amongst the Bluebells was my first small moth Pyrausta aurata of the year in a north Shoreham garden.

4 May 2006
A Large Red-tailed Damselfly was the first Odonata of the year seen in a north Shoreham garden. 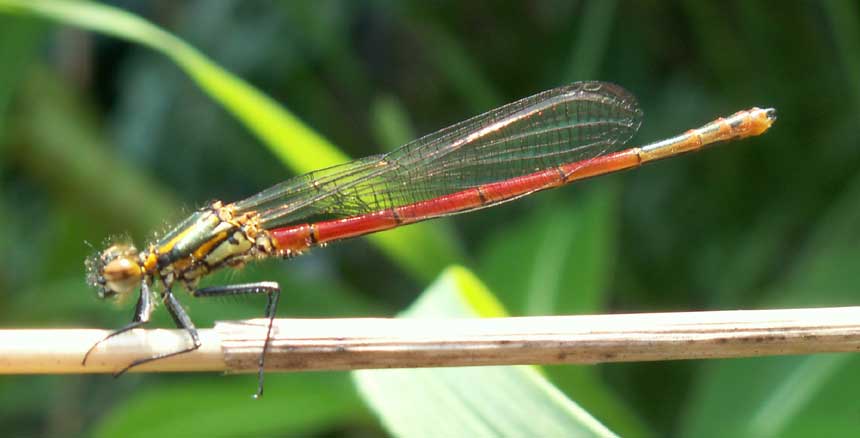 The photographic study shows the Rhingia campestris hoverflies in the north Shoreham garden. The first one is visiting the Spotted Deadnettle, Lamium maculatum, and its long tongue is visible.

22 April 2006
The first Common Bee-Fly, Bombylius major, of the year visited the back garden of 40 The Drive (near Buckingham Park), north Shoreham. Herb Robert was in flower in the weed patch. Syrphus and Eristalis hoverflies were noted.
Adur Flies 2006


21 April 2006
"Has spring sprung at last?" I spotted my first Small White Butterfly and my first Speckled Wood Butterfly of the year in a garden in north Shoreham.
Medium-sized Syrphus hoverflies were at the top of The Drive, Shoreham, with a very small black stripy hoverfly was there and visiting garden flowers as well. The latter species was common but yet photographed or identified. I think this is the prevalent Sphaerophoria species (S. scripta).
2 April 2006
Two Collared Doves nestled up to one another on the garden fence and then copulated after a brief (minute long) courtship. And then I was surprised by the appearance of two Chiff-chaffs, a first for the garden in north Shoreham, and although the glimpse was rather fleeting as they quickly flew off, I was 90% certain of the identification. This was the 25th bird species recorded in the garden in the last three years.
Garden Bird Database 2006
28 March 2006
There was a Crow and Herring Gull on the roof and the neighbour's cat on the back lawn.
20 March 2006
There was one fat Robin and two thin ones. A Queen Buff-tailed Bumblebee crashed into the kitchen window twice. About a gallon (=most) of the submerged frog spawn was removed to my pond in Corbyn Crescent. The spawning had caused the pond water to go cloudy, but three Comet Goldfish could still be seen.
Adur Bumblebees 2006
12 March 2006
I put some food on the summer house and this attracted the usual Jackdaws and quickly an unprecedented six Rooks which even descended to the bird table to quickly gobble up the bread and cheese.
One Magpie made two visits to the garden. Its behaviour was extraordinarily inquisitive, landing on both side fences, on the summer house roof, on the arch shelter where the sunflower feeder was, hopping around and looking everywhere (it appeared that he was wary, perhaps of cats?) and on the bird table where (unlike the Rooks) he appeared to cautious to be preoccupied in feeding. The Robin was seen to visit the sunflower feeder.
The mating embraces of the Common Frogs were up to eight pairs (or more than pairs when three frogs were trying to mate) and there was a large clump of Frog's spawn submerged amongst the weeds. A single bumblebee buzzed around the rockery.
10 March 2006
Three mating embraces of Common Frogs were submerged in amplexus in the garden pond in a Shoreham garden near Buckingham Park. This was seven frogs as one female attracted the attention of two males. Of the Comet Goldfish, there were two brown juveniles observed, one 50 mm long and another much smaller fry of 15 mm.
Four species of corvids visited the garden, including at least eleven Jackdaws, two Crows, one Rook flying over at low level* and another or the same one landed on the Summer House to feed, together with a plump Magpie that perched on the fence. (*probably searching for twigs for its nest.)
Garden Bird Database 2006
9 March 2006
There is considerable mating activity of Common Frogs in the garden pond in a Shoreham garden near Buckingham Park.
Report by Eileen Horton
4 March 2006

My first hoverfly of the year was one of the small ones that flew slowly under the warm sun and landed on a Firethorn in a Shoreham garden near Buckingham Park. I had a good look through a magnifying glass and it was probably a Melanostoma. 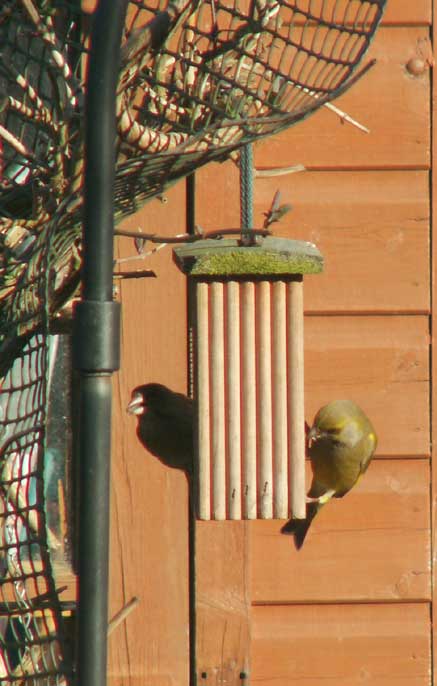 1 March 2006
There were two pairs of Common Frogs in the pond, they appeared to be courting, but there was no sign of spawn. Nine species of bird visited the garden and two Herring Gulls perched on the roof.

16 February 2006
A single Common Frog is seen in the garden pond with three Comet Goldfish actually seen as well as a juvenile fish. There could have been more than one frog and they could have arrived a few days earlier. Five species of garden bird were seen immediately: Greenfinch 1, Collared Dove 1, Starling 1,  Blue Tit  1 and Robin 1, followed by a Blackbird and a Chaffinch within a minute.

12 February 2006
The first Chaffinch of the year (last seen in November) was seen briefly in the garden, but not positively identified until it was seen again four days later. There were no frogs seen in the pond, but in the teeming rain my look was brief.
Garden Bird Database 2006

I forgot all about the offical Birdwatch and following birds were noted in about 20 minutes in the garden near Buckingham Park, Shoreham on Sunday recorded in order of first seen:
Blackbird 2, Blue Tit 2, Greenfinch 5, Collared Dove 1, Jackdaw 8, Starling 3 and Robin 1.

7 January 2006
A first there were no birds to be seen, followed by a modicum of activity and then a tremendous flurry of feeding birds including at least one and probably two Goldcrests, the first seen in the garden since 16 February 2004. The Goldcrests may have been attracted to the tubs of standing water or the small pond. My first mammal of the year was a House Mouse amongst the rockery. Eleven species of bird seen actually landing in under an hour was the most of this year and the most since Christmas Day. A record 14 species were seen on 22 December 2005.
Garden Bird Database 2006

5 January 2006
The was a tremendous amount of continuous activity in the back garden of 40 The Drive (near Buckingham Park), (TQ  219 063), dominated by half a dozen Blue Tits seen all at one time feeding on seed and sunflower mix, nipping at buds on shrubs and dipping their beaks in standing water in tubs and there were at least eight different birds, very colourful and active. They exceeded the performance of the same number of querulous Greenfinches.