THE GOLDSINNY WRASSE IN AQUARIA
by Jim Hall (Swansea)

After a long chat on the phone with Ron Barrett and a subsequent visit some weeks later I became the proud owner of two half grown Goldsinny Wrasse.  These two fish came from Lyme Regis Aquarium around July 1993 at a size of 9cm (3.5") and I took ownership in January 1994 at a size of 10cm (4").   Ron informed me that they were supposedly a male and female but I could not differentiate them myself. They were a pinkish colour all over, apart from the distinctive black spots at the front of the dorsal din and the more noticeable spot between the rear of the dorsal fin and the caudal fin. The fish were very pale in colour, almost albino. 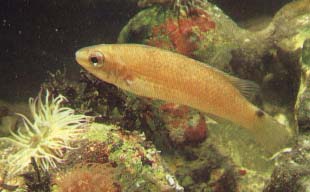 Reference books paint a different picture as they describe a fishes colour when caught fresh from the wild. Photographs by divers show the colour of this fish to be as red as a garden Goldfish. In Public Aquaria the colours vary from a very pale pink, with some specimens sporting an orange livery, but rarely as bright as wild fish.

This fish appears to be rare off the Swansea and Gower coast, so they were a welcome fish in my six foot aquaria. They joined assortment of Corkwing and Ballan Wrasse, Blennies, Pipefish, Mullet, Bass etc. They settled down, and there was peace and harmony until April of 1995.  Around November of 1994 I obtained another Goldsinny of 7.5cm (3") from Geoff and Yvonne Browne of Aberaeron Aquarium prior to the closure of their fine establishment, and one day in late March 1995 I noticed that the colours of all three Goldsinny were changing.  A warm brown colour now covered the  back and sides overlaid with lighter coloured spots and several vertical bars of typical wrasse pattern.

The fish were circling each other once in a while and this continued for several weeks.  During this period the belly region of one fish had began to swell, and over several weeks swell to reveal 'stretch' marks clearly showing. This must be a female full of eggs I decided, and the other Wrasse still the same shape obviously agreed  with me as much more circling and chasing around the tank now ensued.  the colours of both fish were even more intensified with the belly region of the male a soft yellow merging into the warm brown of the sides and back.  The distended belly of the female was more of a silvery shade and displayed the 'stretch' marks very clearly.
Both fish now disappeared from view for 2/3 days, then the male appeared looking very arrogant and did harass some of his tank mates, although no damage was evident. The aquarium contained several rock caves and various plastic and real seaweeds so I did not disturb the decor to find the spawning sight, but after 5 days the female appeared and her belly region had retracted to normal with all signs of 'stretch' marks gone.
The male was getting a bit rough with her now so I removed the female whereupon he turned on the third younger Goldsinny from Aberaeron and he/she also had to be removed a week later, fins in a tattered state.
Three weeks later everything had calmed down in the six foot tank so I put the female back and peace reigned once again.   Approximately six weeks after the apparent spawning I found the female floating about 3 cm above the gravel, upside down and obviously dead.  The fish was not damaged in any way and it could have been the stress of what occurred or maybe just old age.  Did I have a spawning? Although I've not seen any eggs, and fry would be eaten instantly, Yes I believe that I witnessed a true spawning sand it was all worth it just to see the Goldsinny in it's full spawning colour.  During the summer of 1994 on a collecting trip with Chris Batt in Pembrokeshire I caught two young Goldsinny of 2 cm (0.75") and now two months later they are 5 cm (2") long and are being raised in my six foot tank.

What is the growth rate of a Goldsinny?  This question led me to do a possible lifespan chart worked out from the known 'life time over size' of my breeding pair, against the growth rate of my baby Goldsinny from Pembrokeshire.
Although they occur over the same period of time I think a prognostic chart can throw some light on the subject.

Based on a fairly steady growth rate of approximately 3 to 4 cm per year it seems reasonably to say that the Goldsinny will achieve full adult size in captivity in 6 years.

I received two Goldsinny Wrasse courtesy of Len Nevell early this year. After initially settling down together for 3 months, by May they commenced the agonistic conflicts familiar to aquarists who have kept small Corkwing Wrasse. Although, there was no fin damage, it soon became apparent that only one of these two fish could be kept in the same large 50 gallon (5 ft) aquarium. Both fish sported an orange-brown livery and the one fish I kept is still alive. They are fine aquarium fish, and are not quite so aggressive to invertebrate life and the fins of companion fish as 2 year old Corkwings.