I have visited the limestone shores of the Burren in County Clare over a number of years.  The area holds a special  fascination for me containing as it does some of the longest caves in Ireland; caving is one of my  interests.  For readers unfamiliar with the region I will start with a brief introduction. 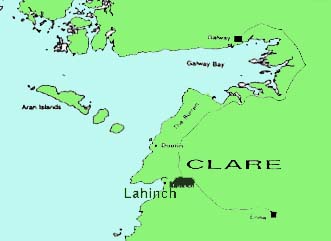 The Burren in County Clare forms  the  southern border of Galway Bay with an extension in the form of the three Aran Islands five miles out in the Atlantic.  The region is characterised by massive hills of bare limestone covered in hazel scrub  and  colonised by Alpine and Mediterranea flora in next to theposition.  Despite a high annual rainfall no rivers flow on the surface   because there is an extensive underground drainage system with many of the springs emerging inter- or sub-tidally.  Seasonal lakes (turloughs) are common as the water drains deep into the aquifer in summer.

We stayed in the tiny village of Doolin,  situated at  the Burren's  southwestern  fringes, about 10 minutes walk from the small harbour (one jetty sheltered by the small offshore Crab Island).
The shore hereabouts consists of flat limestone pavements dropping abruptly into a usually turbulent sea. There are no sandy beaches apart from those at Doolin Strand and Fanore.  Between high and low water mark are  superb rockpools inhabited by thousands of Purple Urchins, Paracentrotus lividus, which have ground the limestone into an incredible network of shapes.

In 1984 I heard reports of submarine caves in Doolin Harbour originally explored by divers from Limerick.  I briefly examined the entrances and wrote them up in a caving magazine dubbing them, tongue in cheek, the Green Holes.  The name stuck and the report inspired a series of exploratory expeditions which so far have revealed well over a kilometre of submarine cave.

Other cavers searching the coast have found some fascinating intertidal caves - not sea caves in the true sense but the remains of caves formed by fresh water and now invaded by the sea.  These provide the rockpooler with the chance to see species not normally viewed in the intertidal zone.  The Green Holes themselves provide shelter for many encrusting organisms.

If you are fortunate enough  to dive in the Harbour (and this depends on the absence of any appreciable swell) then the best time is at low tide when an exposed reef on the right side facing out to sea (north side)  provides the best shelter against any waves.  Swimming out on the shoreward side of the reef one encounters a bed of Laminaria the fronds of which are covered in Blue-rayed Limpets, Helcion pellucidum (=Patina pellucida).

About  70 metres from the shore is an underwater cliff dropping to 15 metres out of the kelp zone.  At the base of this cliff are a number of cave entrances.  On my first ever dive here we encountered four Crawfish, Palinurus elephas,  during the dive; they used the cave entrances for shelter as does a closely related species in the Bahamas.  This year I looked up to see a shoal of Bass, Dicentrarchus labrax, as we reached our deepest point.

The base of the cliff is littered with huge blocks and   patrolled by multitudes of wrasse.  Mainly Ballan Wrasse, Labrus bergylta, were seen, usually juvenile and often lying  in strange positions among the rocks.  Rock Cooks, Centrolabrus exoletus,  and Goldsinny, Ctenolabrus rupestris,  were also seen as well as male and female Cuckoo Wrasse, Labrus bimaculatus. 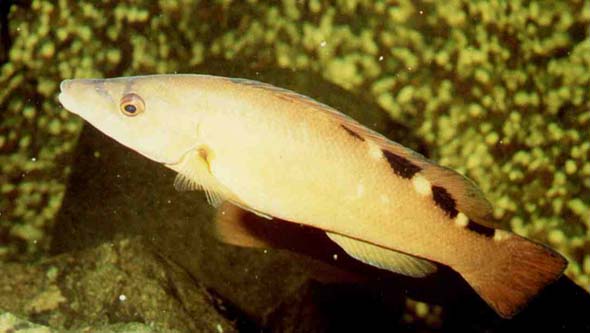 Large Pollack, Pollachius pollachius, swam slowly past and my daughter was fortunate enough to see two large members of the dogfish family while I was poking in a cave. Around and in the cave entrances Leopard-spotted Gobies, Thorogobius ephippiatus, and Tompot Blennies, Parablennius gattorugine,  are common and on my first dive I spotted two very shy Triggerfish, Balistes capriscus.

Amongst the invertebrates were the brilliant white Actinothoe anemones and walls covered in Jewel Anemones, Corynactis viridis. Soft corals were represented by clumps of rich orange Dead Men's Fingers, Alcyonium digitatum, and true corals by Devonshire Cup Corals, Caryophyllia smithii, seen in profusion.  Grazing the rocks both inside and outside the caves are large Edible Urchins, Echinus esculentus. 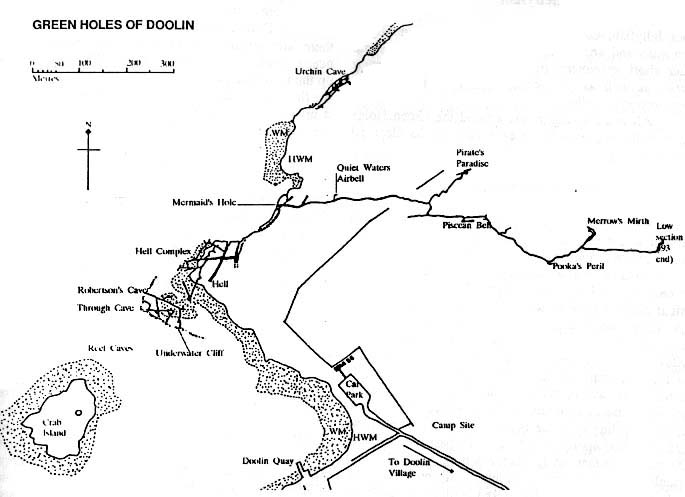 The caves, particularly those with a through current, have walls colonised by a variety of sponges, (probably Halichondria species), some covering the walls in great pallid sheets.  In the more sheltered niches of the caves (especially Mermaid's Hole) sponges tend to adopt long stringy forms - something I have  seen in Blue Holes in  the Bahamas.  The roof pockets of Mermaid's Hole are populated by scores of Beadlet Anemones, Actinia equina. Prawns are seen in large numbers, their eyes glinting in the dark as they rest out in the open on boulders.

As one penetrates deeper into the caves (the longest, Mermaid's Hole, extends a kilometre inland) the number of encrusting organisms declines, presumably because the plankton at the base of the food chain has been extracted nearer the entrance.  Occasionally larger  animals are found deep inside the caves; Brian Judd, a local diver, reports encountering a 1 metre long Conger Eel 250 metres from the entrance and I have encountered a large member of the dogfish family 30 metres inside Harbour Hole the cave nearest to Doolin Quay.

The Reef and Hell complex caves contain  creatures throughout their length; the interconnecting entrances allow a powerful through current at all states of the tide and hence a richer nutrient flow.  The walls of Harbour Hole 40 metres in are covered in the protruding feet of members of the brittle star family, possibly Ophiactis balli,  while on ledges can be seen feather stars, possibly Leptometra celticaalthough my slide is not really good enough to make a positive identification.

Moon Jellyfish, Aurelia aurita,  can be seen commonly in open water and we were also fortunate to have seen some rather short specimens of the String Jelly, Apolemia uvaria, as well as the occasional Compass Jellyfish, Chrysaora hysoscella.
All in all diving in and around the Green Holes is a visually rich experience especially in the clear 10 metre visibility.

About 400 metres along the coast north from Doolin Harbour at the base of a 6 metre cliff is Urchin Cave. This truncated remnant of a much larger system is flooded to the roof at all times except low tide and parts are only exposed by low springs.  The cave is safe to visit if one has reliable tide tables but you will need a light (plus spare) and stout footwear which can be immersed  and some head protection is an optional but useful extra.  The cave can be found by following the coast round from Doolin northwards for about 3-400 metres.  The cave opens as an undercut on a corner of cliff facing north at about the point where one can see good scrambling over the big blocks at the base of the cliff.  The best approach is to go well past the cave and 100 metres further on (before reaching a small cove) scramble down over the boulders, past some big rock pools, and over more weed-covered boulders to reach the entrance.

A short crawl over boulders in a wide letter box shaped tunnel opens into a walking sized passage 3 metres in diameter. Don't panic if you hear the rumble of the sea - there are several entrances communicating with the ocean, some at water level.  One can then walk or wade up the tunnel (depending how low the tide is) examining the floor and walls.  The cave has got another exit but as it involves crawling on your stomach it's best to return the way you went in.  There is no danger of getting lost.

Urchin Cave contains species never normally exposed to the air.  One bizarre sight is that of dozens of cup corals hanging upside down, their soft contents prolapsing apparently without causing them  harm.  Scattered across the floor are numerous specimens of Dahlia Anemones, Urticina felina,  their tentacles out questing for food.  Cotton spinners, Holothuria forskali, also can be seen along the walls while various species of tiny spider crab clamber about.  In some ways the experience is rather like being under a gigantic  boulder.  On our visit this year we were fortunate to see a small lobster in one of the pools in the cave.  If you visit the Burren do try and see Urchin Cave.


The String Jelly is a member of the plankton, a colonial hydrozoan of the open oceans. It is a siphonophore like By-the-Wind Sailor, Velella velella, and the Portuguese Man-o-War, Physalia physalia, but instead of forming a jellyfish-like appearance, the individual polyps are joined together in a long string of up to 20 metres in length, ended by a small float. It is most likely to be seen off the western coast of Britain out in the Atlantic Ocean. Because of its transparency it is difficult to spot and this may be easier when the long string contracts.

Articles and snippets of information, observations on dives and from rockpoolers are all wanted for Glaucus, Shorewatch: the newsletter that will start in January 1997, and for 'Torpedo' Electronic News Service for members connected to the Internet. A 'Guide for Submissions' is available for new contributors and for writers who have not already received it. If writers use a computer, it is much appreciated if the articles can be sent in on a 3½" disc, as this saves me the time of retyping the manuscript, and prevents mistakes.