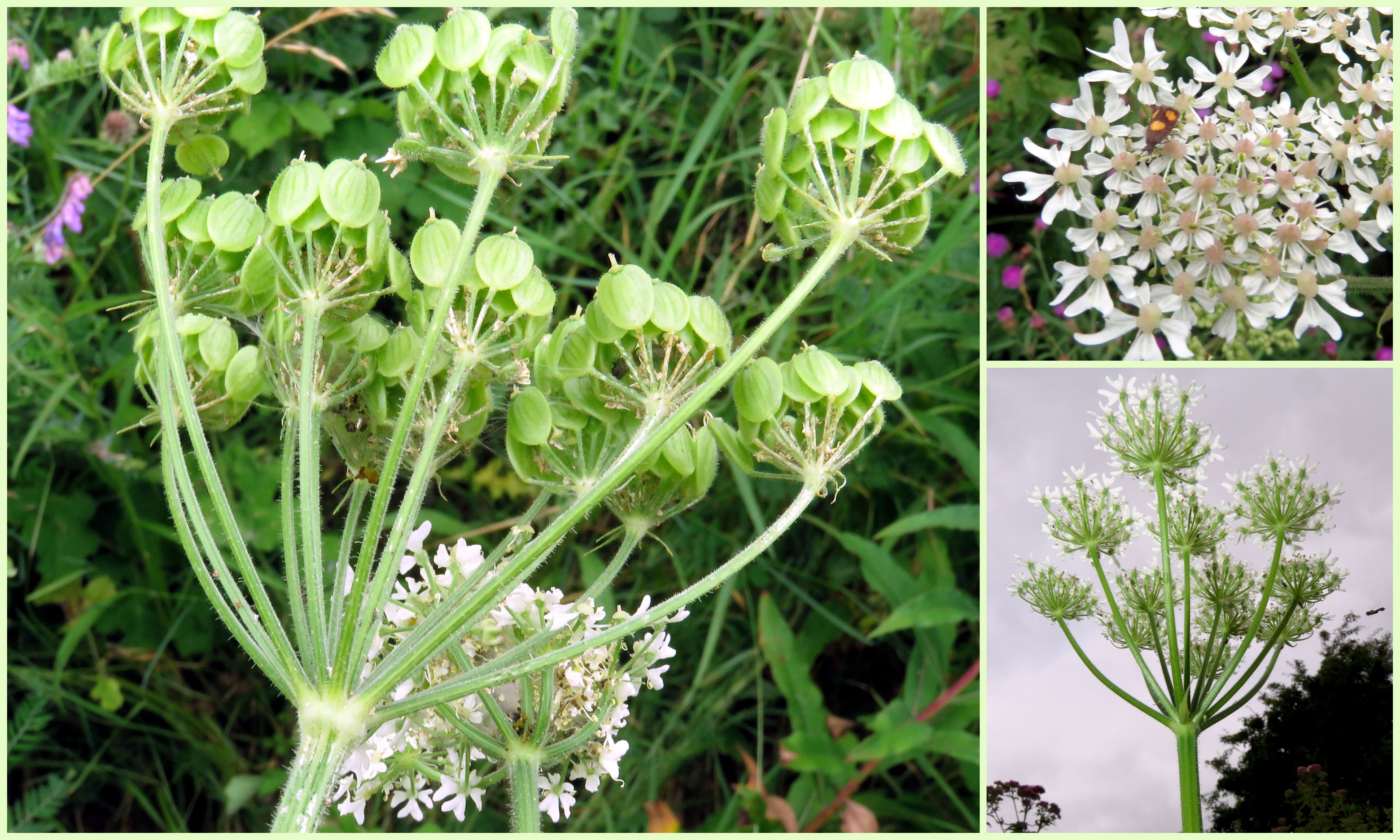 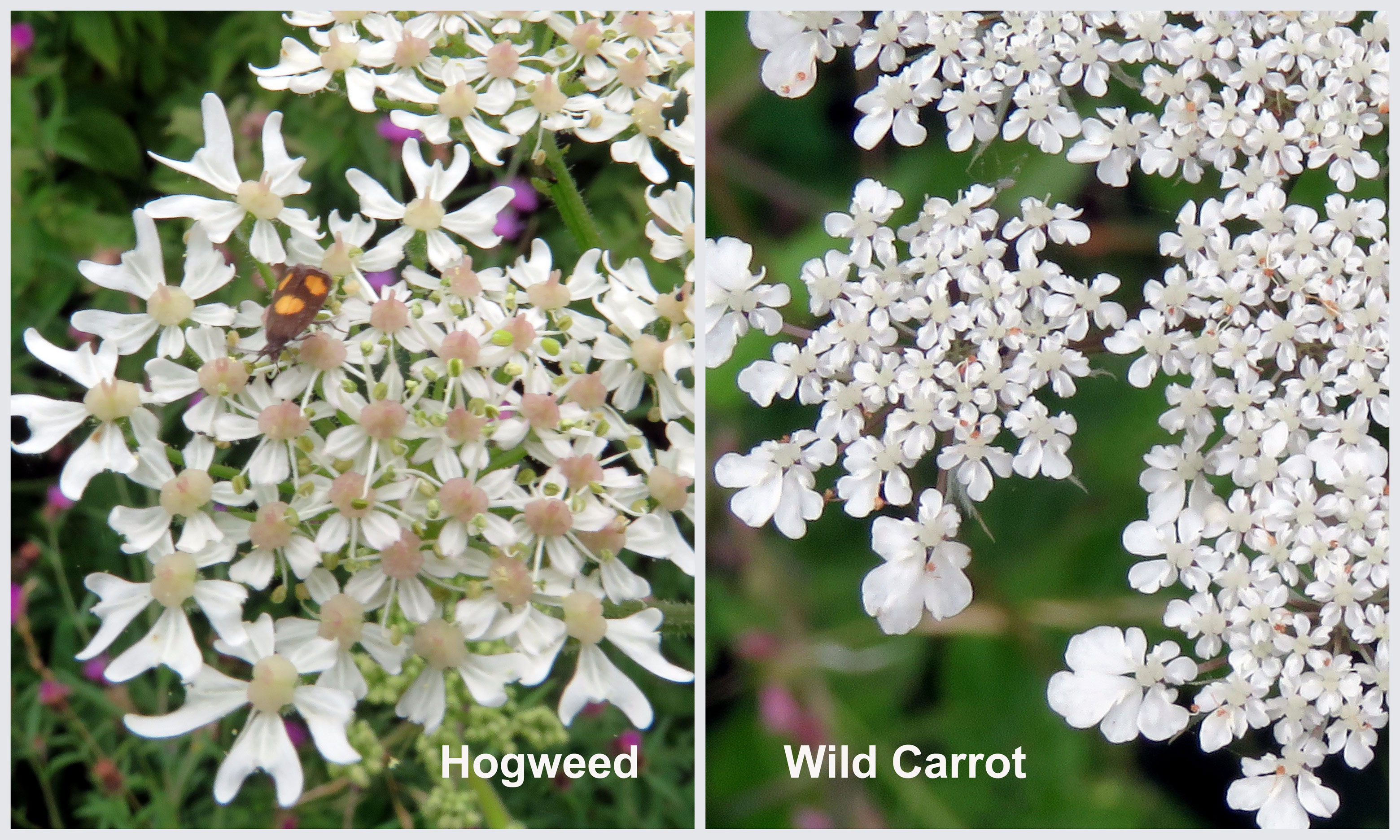 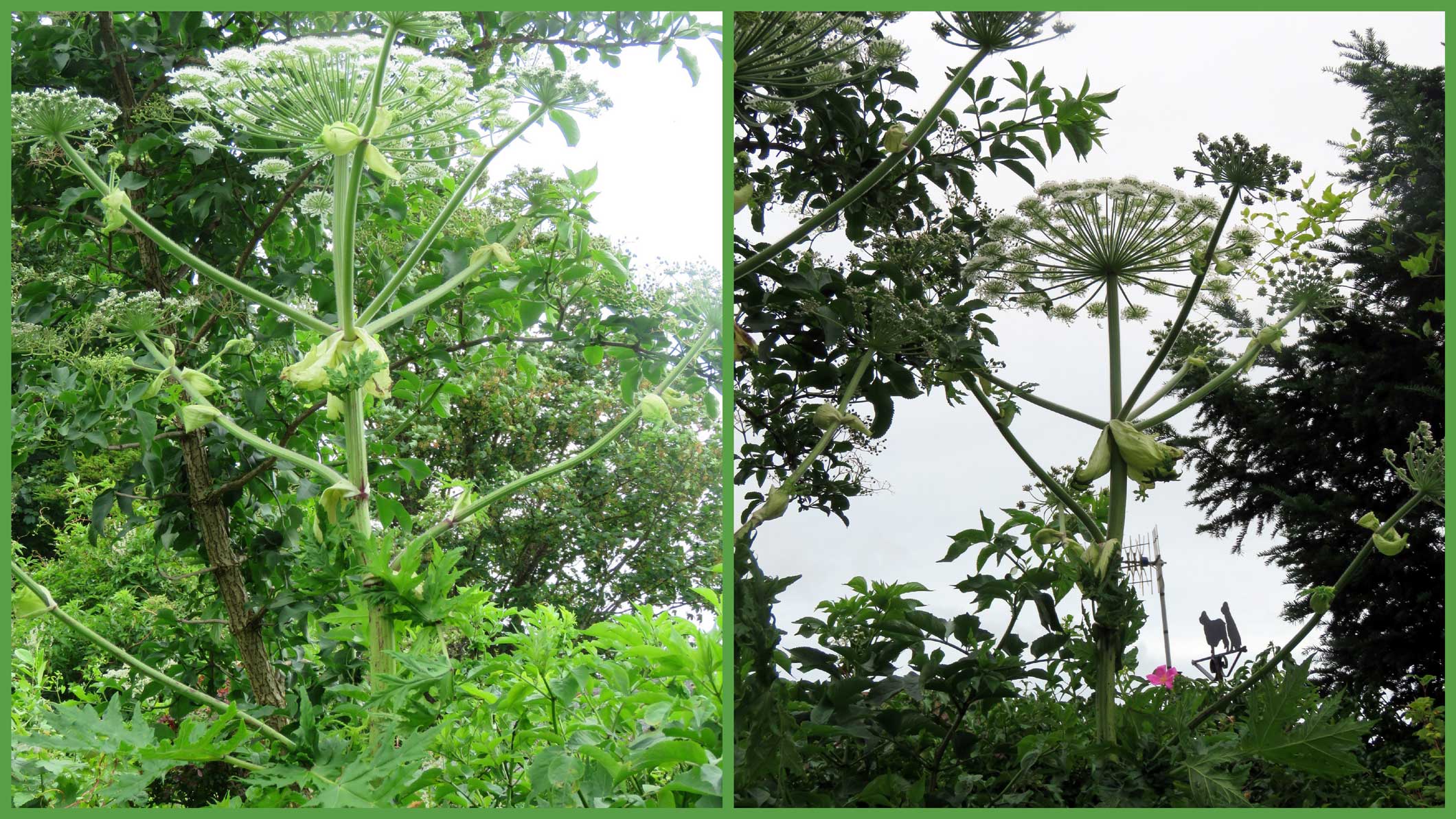 Still cloudy and overcast and too breezy for the open downs, I made a detour to Buckingham Cutting (south) where the Giant Hogweed had grown much higher than a person towering at least three metres above the path. It did not seem to be a week since I last visited but that was because of the intervening thunderstorms and rain. 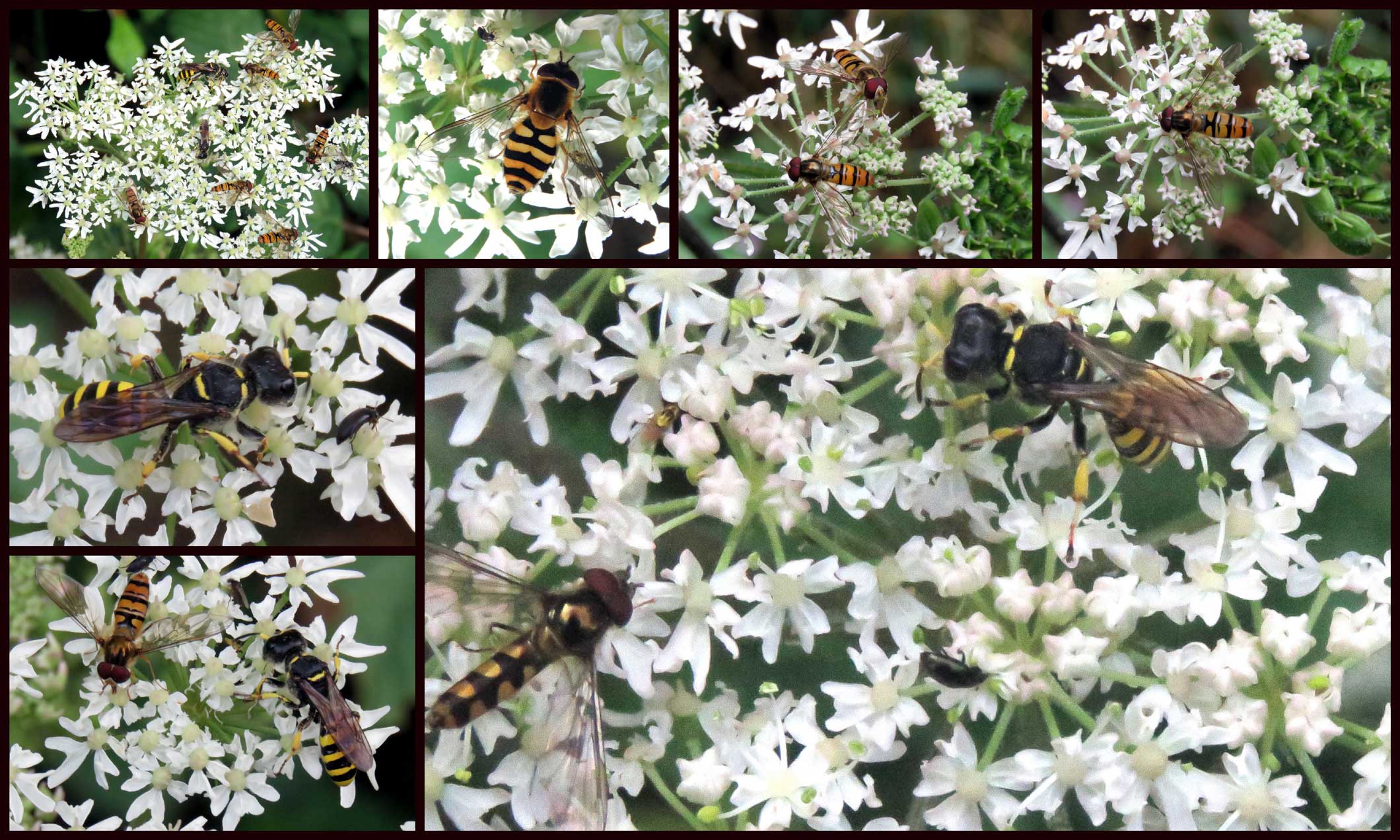 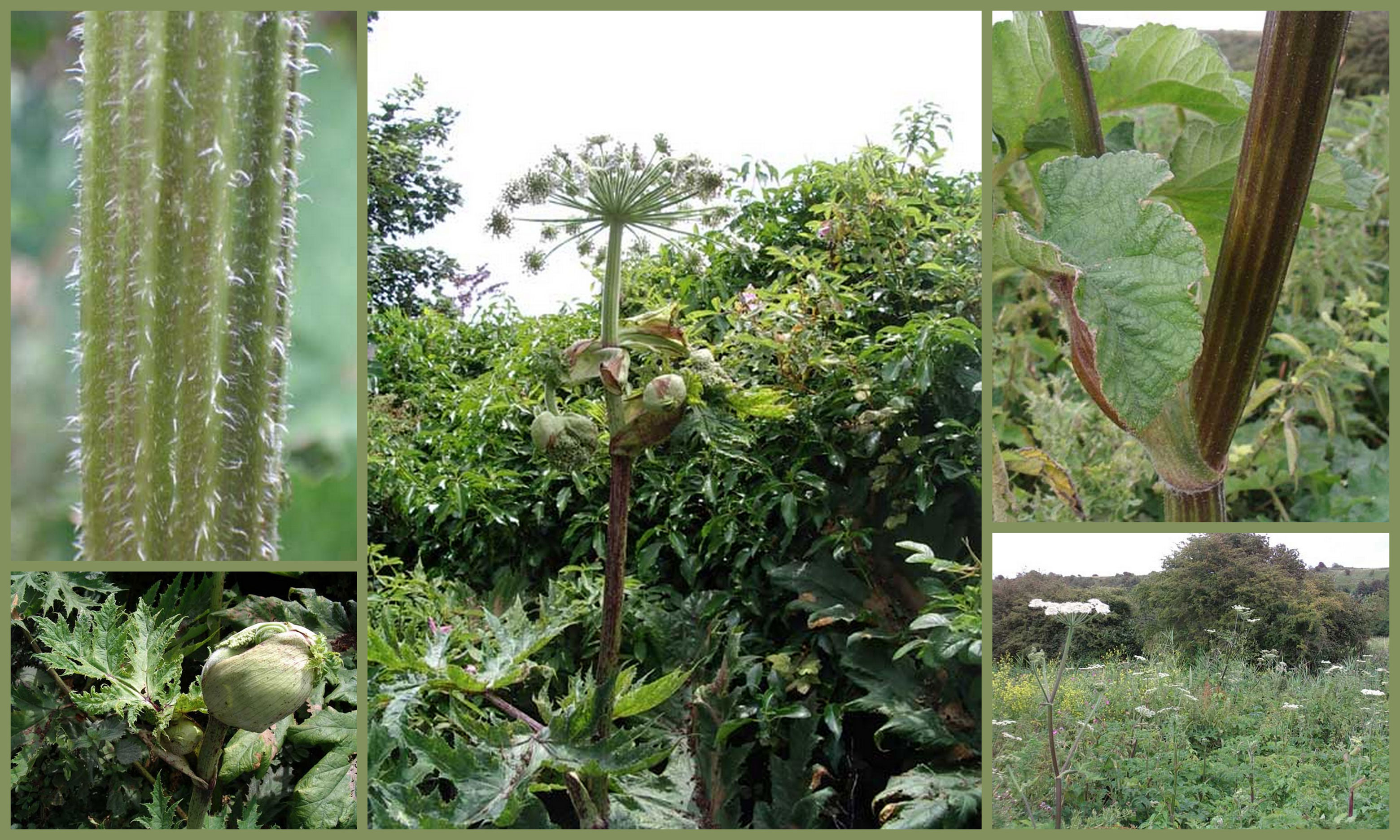 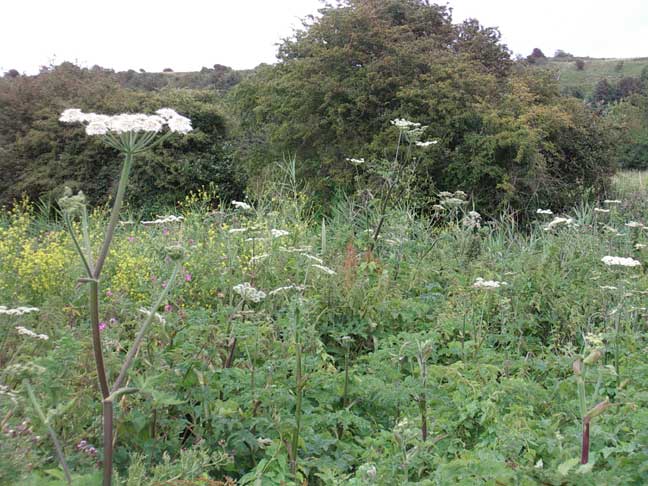 The largest of these hogweeds will grow up to over two metres height within six months in 2004.

At a fraction over two metres high, I thought that this one was the Giant Hogweed, Heracleum mantegazzianum, at least one plant growing amongst the thistles.  This huge alien plant can cause an untreatable and unpleasant rash on affected people. The ubiquitous Common Hogweed, Heracleum sphondylium, grows to a height of two metres in favourable conditions, although it is usually much smaller. The rash produced from the sap of the native umbellifer is not so harmful.

In favour of the identification of the Giant Hogweed is that these plants have reached this height in about six months. The Common Hogweed is thought to grow this fast, but at the time of writing, I have not found details of the growth rates on these two hogweeds.

The hogweeds exude a clear watery sap which sensitizes the skin to ultraviolet radiation. This can result in severe burns to the affected areas resulting in severe blistering and painful dermatitis. These blisters can develop into purplish or blackened scars.
Giant Hogweed Information Page

It is giant hogweed.  The easiest distinguishing feature apart from
size is that it is much less hairy.  Ordinary hogweed is "hispid",
which means bristly-hairy, whereas giant is described by Stace
as "softly pubescent", which means slightly fuzzy.  In practice it
looks hairless until you get close.  The shape of the leaf is
different too, as is the general triffid-like appearance, with very
wide stems and huge stipules covering the
unhatched flower heads.

It occurs not uncommonly in patches along rivers, by roadsides and
on waste ground.  I've posted a photo showing it in
very large quantities along the upper Arun near Horsham (in 2001).
We have quite a few colonies round here on the Hampshire/Dorset
border, and there used to be (around 1990) one just south of the
entrance to the Sussex showground at Ardingly.  Spectacular to look
at, with irritant sap (makes skin highly light-sensitive, like wild
parsnip), and in large quantities it can smother natural vegetation.

According to Stace there are hybrids of it with common hogweed, and
also apparently some plants (differently-shaped fruits) may be a
slightly smaller related species, Heracleum persicum.  Yours is
probably mantegazzianum, though it might be worth looking at the
fruits later.