3 December 2007
About five hoverflies of three species visited the Ivy on the Pixie Path to Mill Hill. Two were Drone Flies, Eristalis, one was a much smaller darker species which could have been Platycheirus and the last two were Marmalade Flies, Episyrphus balteatus.

9 November 2007
One Marmalade Fly, Episyrphus balteatus, was seen in the Butterfly Copse near the Waterworks Road.

7 November 2007
There were a few small hoverflies in the wood to the east of McIntyres Field, Lancing Ring Nature Reserve. They were smaller and darker than Episyrphus balteatus and could be a Platycheirus.

12 September 2007
There were frequent hoverflies on the Ivy by the Pixie Path in the north-west part: Myathropa florea and Drone Flies, Eristalis, and at least one small Sphaerophoria, plus Syrphus and another few of the smaller ones which I did not identify.

10 September 2007
A hoverfly Helophilus pendulus was seen visiting Ragwort next to the Downs Link Cyclepath south of the Toll Bridge. This hoverfly seems to be particularly fond of this plant to visit, but it was the only yellow flower in the area.

9 September 2007
A large species of Volucella was seen on a Bramble at the top of the Pixie Path. Its identity could not be confirmed. My tendency is to think it was Volucella inansis.

26 August 2007
The hoverfly Helophilus pendulus was seen visiting Ragwort next to the Downs Link Cyclepath south of the Toll Bridge.

3 July 2007
As an ominous black cloud loomed in the west, I saw my first of the spectacular hoverflies Volucella zonaria both at the top of the Pixie Path.

2 July 2007
Two species of hoverfly made an appearance on an overcast day: firstly a small hoverfly Xanthogramma pedissequum (above right) in the Butterfly Copse near the Waterworks Road, and a Myathropa florea on the path on the south side of Frampton's Field, Old Shoreham. 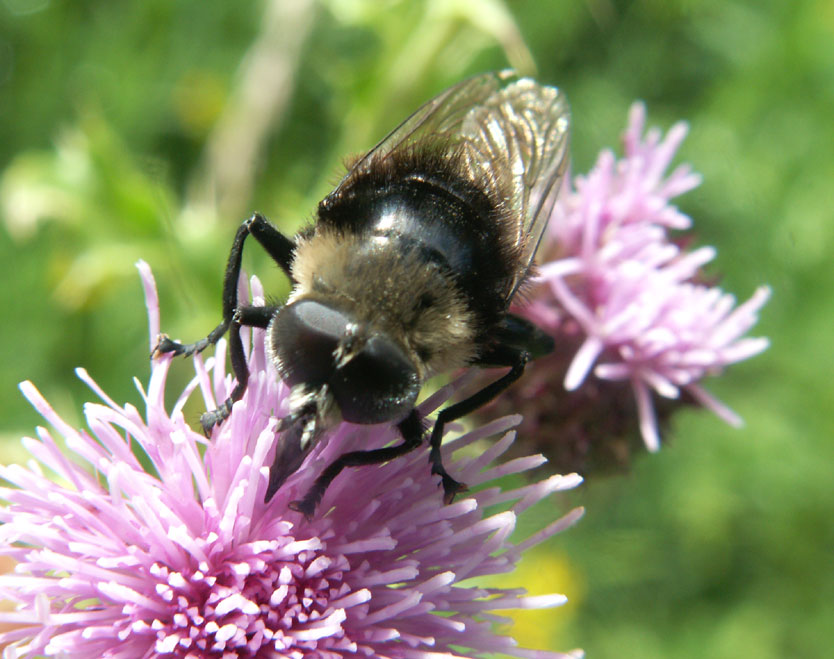 1 July 2007
Looking very much like a bumblebee at first, the hoverfly Volucella bombylans var. plumata was seen on a Creeping Thistle on the Downs Link path south of the Toll Bridge. It was the first of the year.

13 June 2007
Hoverflies Helophilus pendulus and the ubiquitous Marmalade Flies Episyrphus balteatus, make up the bulk of the still only occasional hoverflies in Shoreham town and the outskirts.

20 April 2007
There were at least twenty Rhingia campestris hoverflies on the small patch of Green Alkanet at the southern end of the Waterworks Road.

15 April 2007
The first hoverfly Myathropa florea of the year landed on me in the Butterfly Copse and the expected Rhingia campestris hoverflies visited Green Alkanet and White Deadnettle on the Waterworks Road verges.

13 April 2007
A handful of Rhingia campestris hoverflies visited Green Alkanet at the southern end of the Waterworks Road. A few Epistrophe eligans hovered around at the top of the Pixie Path where the old stile was.

9 April 2007
Still only the occasional Syrphus hoverflies were noted.

21 March 2007
A Syrphus hoverfly visited a Dandelion on the Pixie Path.

12 March 2007
There were several species about, at least three, but I only identified a half a dozen separate Drone Flies, Eristalis. One was identified as Eristalis pertinax.

2 March 2007
In a brief burst of early afternoon sunshine, I spotted my first two hoverflies at the top of Chanctonbury Drive (SE of the bridge to Mill Hill). They were a Drone Fly, Eristalis, and a Syrphus.

The World of Syrphidae