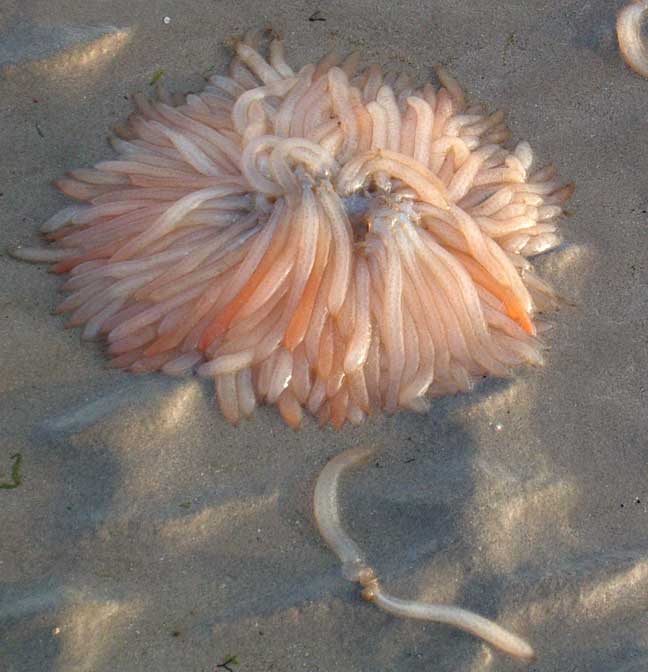 Ostensibly a sand and shingle beach, but the sea bed uncovered by the low spring tides in places has a hard bedrock and loose rocks. Surprisingly, some of the less common crabs have been discovered between the tides and two species of sea anemones reach their eastern limit up the English Channel at Lancing. One other small species of sea anemone Diadumene cincta is recorded here and only a few other places around Britain. Offshore it is a breeding area of the small orange fish known as Montagu's Sea Snail, Liparis montagui.

10 December 2005
At low tide on the sand on the beach by Widewater, two Oystercatchers and handful of Common Gulls were noted as nothing unusual with a score or more omnipresent Black-headed Gulls.

9 September 2005
The sunset (7:15 pm) on a exceptionally low equinoctial spring tide on Lancing Green beach, was a thin ribbon of red sky that outlined Worthing Pier three miles to the west. Black-headed Gulls were hovering and decending to dip their beaks into very shallow water, but their prey was a mystery. A single Little Egret and sub-adult Herring Gulls were feeding on the exposed rocks and seaweed with at least two Carrion Crows. The Black-headed Gulls were the noisy ones.

26 July 2005
A low tide visit to the seashore littered with rocks just west of the Brooklands waste pipe showed little variety. Snakelocks Anemones, Anemonia viridis, were common (100+) but other than that there were a dozen Squat Lobsters, Galathea squamifera, and the usual common crabs and other crustaceans.

The Hairy Crab (a true Brachyuran crab) has two claws (chelae) of unequal size, and the very small Long-clawed Porcelain Crab could hide under a 5 pence coin and has only eight visible legs (including its claws) indicating that this crab is actually an Anomuran.
There were a handful of gulls and a small tern, not diving in but repeatedly pecking at some prey just beneath the surface. A Ringed Plover landed amongst the rocks and weed.

13 June 2005
Hundreds of cuttlebones of the Common Cuttlefish, Sepia officinalis, are washed up on the strandline along the shore as is normal in June when the adults die after spawning. In the shallow sea on a neap low tide, the push-net off Lancing Beach (off Golden Sands Caravan Park) failed to locate a single shrimp in over thirty minutes. The sand flats were barren except for an adult Weever, Echiichthys vipera, a soft recently moulted Spiny Spider Crab, Maja squinado, and one Vernal Crab, Liocarcinus vernalis.
Adur Intertidal
BMLSS Crabs of the Seashore and Shallow Seas 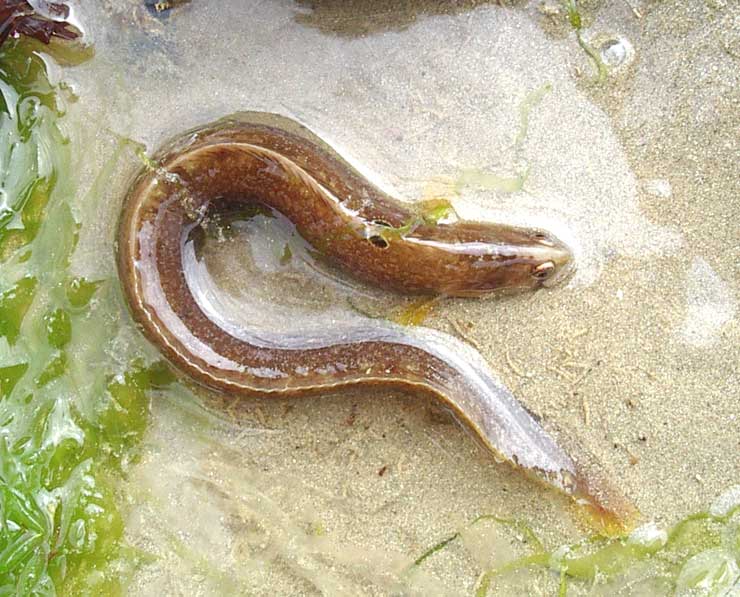 28 May 2005
It was blowing a Gale Force 7 and the fauna was very limited on the shore by the Half Brick, east Worthing. A very long worm in a chalk rock was noticed when it would have overlooked if the marine life had been more prevalent. Five Butterfish, Pholis gunnellus, hid under the few rocks available for turning.
BMLSS Rockpooling

25 May 2005
Shrimping (push-net in the shallows in the sea off Widewater) continued the poor results with so much weed, after the two days of strong breezes, that shrimping was severely hampered. Not a single Brown Shrimp, Crangon, was caught. A small Brill, Scophthalmus rhombus, was discovered floundering amongst the weed and an small Sand Sole, Pegusa lascaris that escaped the net, with a dozen of the South-clawed Hermit Crab,  Diogenes pugilator, and one of the swimming crabs, the Vernal Crab, Liocarcinus vernalis. There were a pair of large mating green Shore Crabs, Carcinus maenas, caught as well, but these very common crabs were not measured. The male was about 65 mm in carapace breadth.
BMLSS Crabs

25 April 2005
The sea defence work had closed off access to the best beach by Lancing Beach Green. The low spring tide by the Half Brick uncovered Sea Squirt covered rocks but very little of interest. Snakelocks Anemones, Anemonia viridis, were very frequently seen (over 50) and one Squat Lobster, Galathea squamifera, plus a few common species like a damaged Hairy Crab Pilumnus hirtellus, and the sea anemone Sagartia troglodytes. A small flock of less than half a dozen Sanderlings whizzed just over the surface of the sea and shore. Generally, extremely disappointing.
Half Brick Beach 2004

21 March 2005
A Common Dolphin, Delphinus delphis, was stranded on Lancing Beach. The dolphin, which was attended by British Divers Marine Life Rescue, was still alive when washed ashore. I received a report from Trevor Weeks reporting on the outcome.
The dolphin was female about two metres in length and about 80% of its teeth were missing. The dolphin appeared badly emaciated and its breathing rate was 8 to 10 breaths a minute. Following advice from the vet, the decision was made that the dolphin was suffering and that an attempt to return it to the sea was not an option and euthanasia was the best course of action.

23 February 2004
Twenty Cormorants were counted standing on the groynes on east Worthing beach (near Brooklands). These numbers never seem to change much over the years, the most I have counted was 23 a few years ago. The tide was in. At least one of the Cormorants had a pronounced grey breast and under wings. I did not have my binoculars with me at the time of observation, so I could not see the details, but this grey was very clear at a distance. This bird was on a subsidiary groyne perch and may have been an immature bird?