Lancing Beach
Ostensibly a sand and shingle beach, but the sea bed uncovered by the low spring tides in places has a hard bedrock and loose rocks. Surprisingly, some of the less common crabs have been discovered between the tides and two species of sea anemones reach their eastern limit up the English Channel at Lancing. One other small species of sea anemone Diadumene cincta is recorded here and only a few other places around Britain. Offshore it is a breeding area of the small orange fish known as Montagu's Sea Snail, Liparis montagui.

Worthing Pier
The rock and sand terrain beneath the amusement pier; at first glance, the shore appears exclusively sandy and in all respects one of the  least promising of rockpooling shores. Firm sand leads the explorer out to below mid-tide region where the sand gives away to a mixed ground with rocks buried in the sand, a few looser rocks (cobble-sized), and shallow sandy pools. Under the steel girders of the pier is the best area, with the supports providing attachment points of a sizeable mussel community. 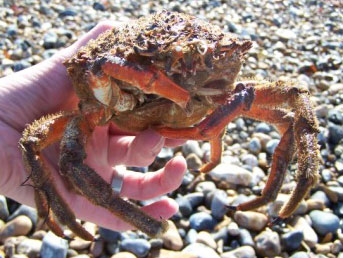 I went for a long walk on the beach this morning and about 10 :00 am just as the tide was coming in and was amazed by the large amount  of dead and washed up Spider Crabs, Maja squinado, in one spot I counted 12, I stopped counting at 26 as I walked from Lancing Beach Green towards Onslow Court. At one point one crab came washed up and was still alive, the poor thing could hardly move so I picked it up and popped it back into the water. The smallest I saw was about the size of a tennis ball (the carapace) and the largest was the one I threw back at about four tennis balls put in a square.

26 October 2007
A seal, probably a Common (or Harbour) Seal, Phoca vitulina, was spotted off Lancing Beach in the sea a 100 metres or so offshore at 8:00 am (tide level 2.2 metres, 2½ hours after low on a spring tide). Its whole body was seen and there could be no doubt about its identity.

Seal Report by Andrew Smith (Lancing)
An Earlier Report from 2002

About 10:30 am, there appeared to be about a dozen Turnstones on the same beach, but when disturbed a flock of about 35 rose and the flock swirled in a slight curve before settling thirty metres to the east. One Wheatear showed its white tail and there were a dozen plus Meadow? (or Rock) Pipits which occasionally perched on the wooden groynes. I looked out to sea for the seal, but I could only spot two Cormorants on the surface and actively diving under.

26 September 2007
My visit was a bit briefer (30 minutes) than normal because the first spots of rain were felt under a cloud, and it was breezy and the water felt just slightly cold. A few Sanderlings were disturbed on the sand by Onslow Beach, east Worthing (TQ 170 028), just below the shingle. 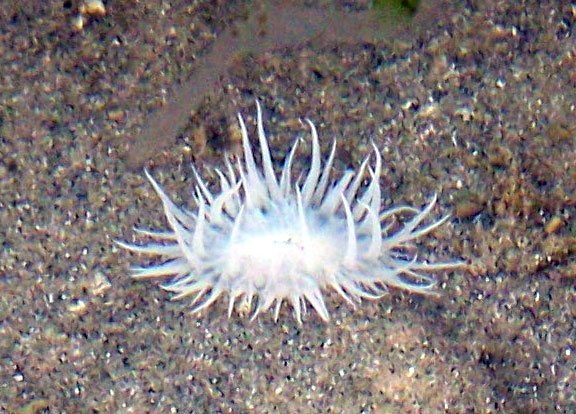 plus a patch of Star Ascidian on a rock, four of the small shrimps Athanas nitescens, 20+  Prawns Palaeamon serratus, and two Rock Gobies, Gobius paganellus, one Butterfish, Pholis gunnellus, and one 5-Bearded Rockling, Ciliata mustela.

29 August 2007
A visit to Onslow Court Beach, east Worthing, produced many of the usual intertidal crabs and similar crustaceans:

24 May 2007
A shrimping expedition to Lancing Beach (just to the west of Lancing Sailing Club) on a low neap 1.9 metre tide revealed the sandy shallows and a clear sea on a calm day and the haul in 40 minutes or so using my small 60 cm push-net was about 100 Brown Shrimps Crangon crangon, small flatfish fry, one small Plaice, occasional small Sand Sole, Pegusa lascaris and one second year Sole. Solea solea, a handful of South-clawed Hermit Crabs, Diogenes pugilator, a few very small Common Hermit Crabs, Pagurus bernhardus  in Grey Topshells, one Vernal Crab, Liocarcinus vernalis, and a few of the swimming crabs Portumnus latipes.
BMLSS Crabs
BMLSS Hermit Crabs 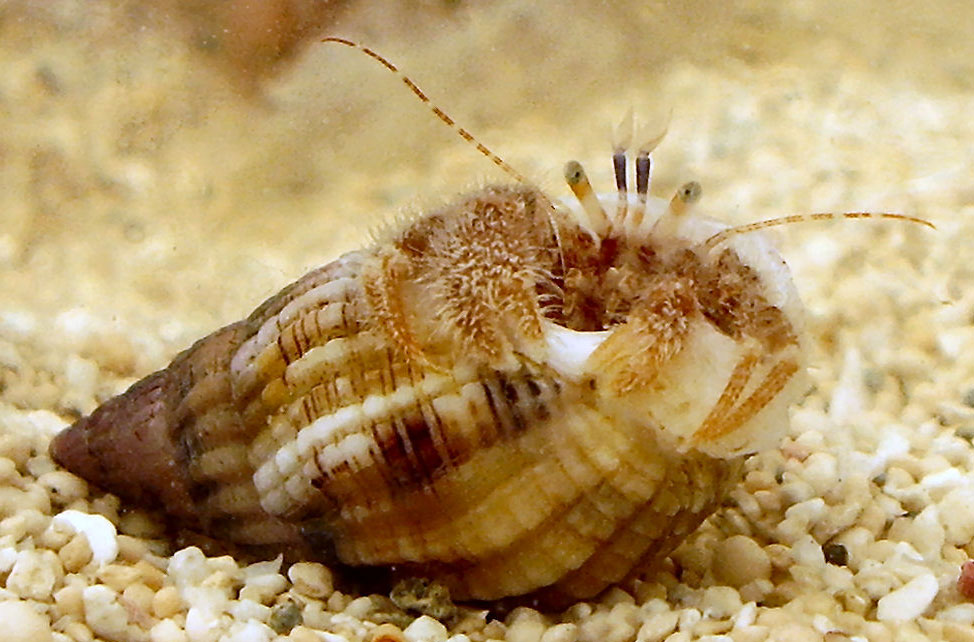 16 April 2007
The seashore off Lancing Beach Green at low tide was silted up much more than Worthing two days earlier and the fauna on the rocky patch was much poorer, notably frequent Squat Lobsters, Galathea squamifera, Hairy Crabs, Pilumnus hirtellus, and tiny Long-clawed Porcelain Crabs, Pisidia longicornis, under rocks which attracted the attention of ten Crows. One Crow was persistent, pecking at sponges and seaweeds on rocks, inserting its beak in nooks and crannies, seen with very small crabs in his mouth about once every two minutes at least five times, and one occasion it used its beak to roll a large rounded rock completely over. Two large Chitons (a mollusc in the class Polyplacophora) looked like they had been pulled off the rocks and then discarded. These were probably Acanthochitona crinita. One very small specimen of the Pimplet Anemone, Anthopleura ballii, was also discovered. This is an unusual find on Sussex shores. 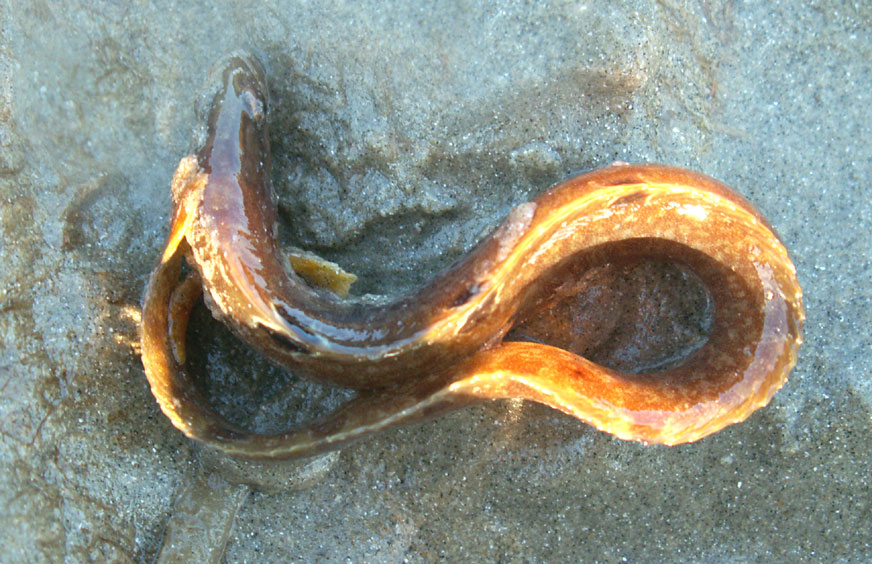 Sagartia troglodytes was the only sea anemone that was common, although a few Beadlet Anemones, Actinia equina, were seen on the underside of rocks and at least one Daisy Anemone, Cereus pedunculatus, was noticed with its spread of numerous tentacles level with the sand. Three Butterfish, Pholis gunnellus, were seen, although one was a tiny thread-like juvenile. On adult Rock Goby, Gobius paganellus, was stuck on the underside of the boulder by its pelvic sucker-like fin and fell off when I lifted it. A half a dozen Hairy Hermit Crabs, Pagurus cuanensis, were seen in Netted Dogwhelk shells. A Long-legged Spider Crab, Macropodia sp., was seen under the first rock I turned, but it was the only one I spotted. A few Edible Crabs, Cancer pagurus, were seen part buried in sand under boulders.

16 April 2007
A rockpooling trip in the calm sunshine to Worthing Pier was rewarded with abundant (over a thousand in an hour when all added together) sea anemones and crab-like crustaceans notably a half a dozen Hairy Hermit Crabs, Pagurus cuanensis, one of the infrequently encountered species seen at low tide. Some of the larger Snakelocks Anemones, Anemonia viridis, were 60 mm in diameter before splitting into two separate anemones, which would occur successively so that one anemone could become four or more in a couple of hours. The Daisy Anemone, Cereus pedunculatus, was common and equalled and probably exceeded any numbers I have seen on this beach before, with at least 200 before I stopped counting. Dark brown and pale cream tentacled specimens were both common. Squat Lobsters, Galathea squamifera, and Hairy Crabs, Pilumnus hirtellus, were seen under every suitable rock and more often than not more than just a mating pair. The Butterfish, Pholis gunnellus, were noted as being in particularly fine condition with clear ocellated spots and no parasites. I discovered one gastropod shell that had a name that did not come off the tip of my tonque, being so infrequently found on local shores. This was a shell of the Common Wentletrap, Epitonium ciathrus. This mollusc is reported to feed on sea anemones.

18 March 2007
A Gale (> Force 7) impeded a rockpooling trip to Lancing Beach as the rocks were not uncovered on the equinoctial low spring tide, so I ventured further west to Onslow Beach, east Worthing (TQ 170 028). The fauna was sparse: Hairy Crabs, Pilumnus hirtellus, were very frequently seen, with occasional small specimens of Squat Lobsters and sea anemones of three species.

The most newsworthy discovery was not made until later when a small gastropod shell (Netted Dogwhelk) collected was found to contain the small Hairy Hermit Crab, Pagurus cuanensis, one of only a handful I have ever found between the tides. Later (after its death on 25 March 2007), this tiny hermit crab was discovered to have a dark maroon coloured egg mass.