The Menai Strait is a place of beauty, inspiration and respect. It also plays an important role in the history of Wales, from the last defence of the Druids against the invading Roman army, to the present day.

The eminent geologist Edward Greenly wrote of the Menai Strait in 1919  "Few valleys in Britain have been more discussed than the Menai Strait."  The 15 miles of river-like channel, overhung by quiet inland woods, yet fringed along their shores with seaweed;  the clear waters twice a day placid like a  lake, yet twice a day moving in a tide-race that can be heard a mile away; these things a  sort of paradox of Nature,  that cannot but rouse the scientific imagination to inquiry."  He would no doubt be pleased that the entire length of the Menai Strait has been proposed as a Marine Nature Reserve.  Indeed, if all goes well, it will become one soon.  Recently a revised consultative document was published by the Countryside Council for Wales who are responsible for designating and looking after Marine reserves in Wales.  The document explained the rationale behind designation and what could be achieved once it had taken place. The Menai Strait will be only the second Marine Nature Reserve in Wales and only the third in the whole of England and Wales.

The Menai Strait is a narrow, 25 km long,  strip of sea-water separating the Island of Anglesey from mainland Gwynedd.  It consists of two parallel, but separate, reaches which trend roughly north-east to south-west, separated by a narrow middle reach which trends roughly north-south.  The narrow southern end  (Fort Belan across to Aber Menai Point) is only 400 metres wide at high tide.  From here it widens to a maximum of 1100 metres across from Traeth Gwyllt to Caernarfon Castle, and then narrows again until the middle reaches (Port Dinorwic and Menai Bridge) where it is only about 500 metres across.  After this it broadens again until, at Bangor Pier, it is 900 metres wide, whilst the distance Puffin Island to Penmaenmawr is some 7.5 km in length.

The Straits has many regions with outcrops and rocky areas, however,  most of it is composed of shallow intertidal mudflats and sand banks, such as Traeth Lafan and Traeth Melynog.  There are also a number of deep hollows, e.g. at Pwll  Fanogl, where there is one that is about 25 metres in  depth. This particular hollow is thought to result from the formation of a pothole at a time when a local river discharged to this area at the end of the last ice age.

The  rocks that form the shore of the Menai Strait span about 600 million years.  The geology is  complex and includes rocks from the Pre-Cambrian Mona Complex, Cambrian Sandstone, Ordovician and Silurian shales, Carboniferous sedimentary deposits, Palaeozoic igneous intrusions and recent rocks of marine alluvium.   About 85% of the Menai Strait is underlain by a variety of  unconsolidated deposits.  These are predominantly Quaternary sediments with a venire of more recent sands, muds, shingle and boulder.

At the end of the last glaciation the Menai Strait lay beneath the meeting point of ice of North Wales origin and that from the north (Irish Sea Ice).   As a result it was moulded, in impart, by the action of both ice and melt water drainage.  As sea levels rose at the end of this period the Menai Strait was submerged and features such as Aber Menai point were formed.


WHAT IS SPECIAL ABOUT THE MENAI STRAIT?

The Menai Strait was chosen as a potential Marine Nature Reserve for a variety of reasons.  It was first studied at end of the last century when Liverpool University set up a Marine Station on Puffin Island.  Once diving opened the underwater world the diversity of life became clear.  The biology of the Swellies in particular is both rich and diverse, due to its unique combination of environmental factors.  It would in itself be worth preserving, but when combined with the complex and valuable geological, geomorphological and hydrographical features, the area is outstanding.

The biological interest of the Strait is dependent upon the tidally driven water flows. Though the overall movement of water is towards the south-west  the actual tidal pattern is complex. The  inflowing tide enters the Strait at Abermenai Point and from here it flows northward.  However, before it can reach the other end of the Strait, the tidal wave (which travels faster in deeper water) has passed around Anglesey and entered the Strait for a second time at the Bangor end.  This results in the two opposing flows meeting somewhere  between the Swellies and Bangor pier, with the actual point of meeting  dependant  on wind and tidal conditions. These tides generate strong currents that can reach a maximum of 8 knots in some locations. Despite its proximity to land, and the freshwater input of small rivers such as the Ogwen and Seiont, salinities within the Strait are near to those of the open sea (generally in excess of 3.0%, the water of the Irish Sea is about 3.4%).  These high salinities allow a much greater diversity of marine life than is found in more estuarine environments.

The Menai Strait has a wide variety of habitat types and is home to over 1,400 recorded species of plants and animals.  Although we know of no species that are unique to the Menai Strait the combination of strong currents and other environmental factors has led to the development of a number of rare features and unusual animal associations.  For example, Halichondria panicea (a sponge) and Tubularia indivisa  (a hydroid) live together, forming extensive mats over the sea bed in the area of tidal rapids.  It is these very currents which both supply food and prevent the deposit of sediment.

The Strait is also inhabited by a number of rare creatures.
These include the  brachiopod Gwynia capusla, which lives between sand grains,  and the rock boring Little Piddock, Barnae parva.  Whilst restricted to the west of Britain in the Strait it bores into the blocks of limestone which make up the Menai Suspension Bridge!

Various shellfish are also found  Lobsters, once common are now both smaller and harder to find.  Mussels are grown commercially to the north and at Tal-y-foel.  Cockles are found in considerable number at Traeth Lafan and Traeth Melynog.
However, recent work at Traeth Lafan showed that if they are collected by hydraulic dredging there is a considerable reduction in the pre-market sized 1 year olds and that other types of none commercial bivalve are also damaged.  Ragworm, of an unusually large size, are traditionally found in the more muddy areas of the shore.  Unfortunately, both locals and visitors dig them for bait.  Superficially, this only appears to cause temporary disturbance, however, recent studies indicate both that some of the stocks overexploited, and that the act of digging is extremely destructive of habitat.

The Strait is also home to internationally important numbers of birds, and Traeth Lafan is designated as a Special Protection Area under the EC Birds Directive.  The large number and variety of waders feed on the  many marine invertebrates and rely on the area both as a refuelling stop on their autumn and spring migrations and as a refuge in winter.  Larger animals, such as Seals and Porpoises, use the Menai Strait as a short cut from Caernarfon Bay to Liverpool Bay, and Otters are occasionally seen on the shore or in the water.
Archaeology:

The remains of Goradau (fish traps) are found along the shore.  One, at Menai Bridge, dates from as early as the 14th century, but the best preserved is at Ynys Gorad Goch.  This was built, complete with the fish smoking chamber, in 1824, and was used continuously until 1959.

The Strait has always been heavily used by shipping  and inevitably a number of these vessels have come to grief.  One of the best studied is the Pwll Fanogl slate wreck.  This, a clinker built vessel made of 'western oak', is thought to have sunk between 1570 and 1690.  Today it is one of only three Welsh wrecks protected under the 'Protection of Wrecks' Act 1975.

The Menai Strait supports a wide variety of recreational activities ranging from sailing  to fishing  and bird watching.   It is also a local feature attracting many tourists who walk in and admire the landscape of this region.

Due to its diversity  the Menai Strait is regularly used by schools, colleges and universities for the 'in field' teaching and training of subjects such as  marine biology, geology and geomorphology.

Conservation  and the value of a Marine Nature Reserve

Considerable anxiety has been expressed as to the state of the Menai Strait.  It is thought to be suffering increased disturbance and pollution.

A steady reduction in water clarity has been recorded since the 1970's and with it a decline in certain species of sponge. Seaweed distribution, especially foliose red algae has also changed because light can no longer penetrate as far.  This means that the plants can only thrive in shallow areas, not in deeper ones where they were once common.

Today there are seven 'Sites of Special Scientific Interest' (SSSI) and one National Nature Reserve adjoining the Menai Strait.  Designation of the entire stretch of the Menai Strait as a Marine Nature Reserve will allow the conservation and maintenance of a unique ecosystem, as well as promoting survey and research programmes into the area and enhancing its educational and amenity value.

This article was previously published in welsh in the journal Dan Haul and in the Vernal 1995 issue of Glaucus. 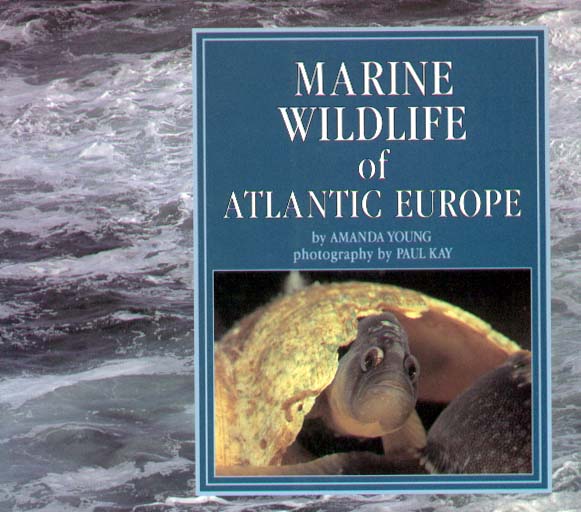