Mill Hill Images
Extra Images from the Upper Slopes only

10 May 2004
East of Mill Hill, the first Rook appeared, followed by a pair east of Erringham Hill, and at Anchor Bottom and Beeding Hill to the north over 300 Rooks probed in the grasslands.

There were clumps of Agrocybe mushrooms and the first emergence of Bird's Foot Trefoil.
Fungi of the Downs in May 2004
Fungi of Shoreham

26 April 2004
On the open upper slopes of Mill Hill there was a Brimstone Butterfly and a handful of Small Tortoiseshells, orange in colour but not fresh, the orange dulled by age.
Adur Butterflies Flight Times
Adur Butterflies
The Common Carder Bee, Bombus pascuorum, with is orange furry thorax was buzzing around the grass at the southern end, near the Blackthorn bushes on the east side midway between the car park and the reservoir. This species is the third most common bumblebee species on Mill Hill.
Adur Bumblebees

On the upper slopes of Mill Hill the Morels were dried out and at least one of two toadstools appeared to be eaten out from the inside (they are hollow inside).
Fungi of Shoreham
Mill Hill Nature Reserve

20 April 2004
It was the long probing beak on the short turf of a Rook on the top of Mill Hill that gave it away.  Its grey face was apparent even before I fastened my binoculars on this solitary corvid. Only about one in a thousand large black corvids locally are Rooks, the rest are Crows with Jackdaws classed as small. 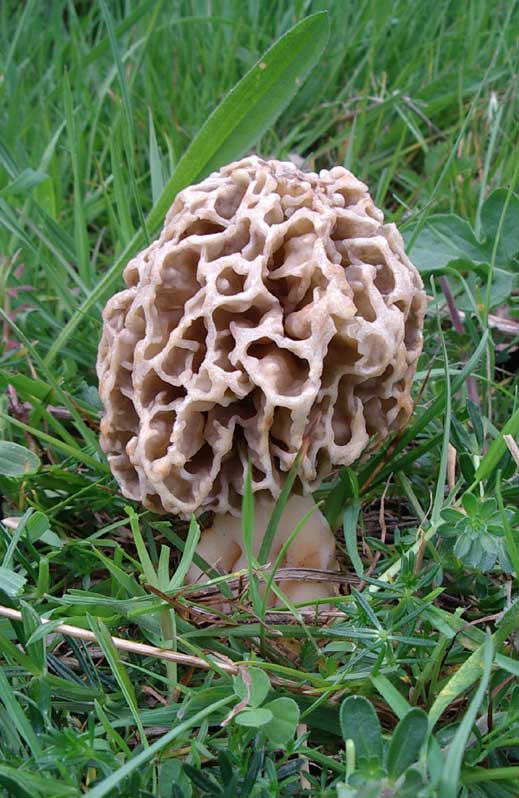 A solitary toadstool was amongst the still short grass near a Hawthorn bush. I recognised it immediately as a Morel, Morchella esculenta, because of its unusual distinctive appearance. I had not seen one before and although an edible species, I left it in its place just south of the car park.
The male Kestrel hovered over the lower slopes, whereas the female was seen at a much lower trajectory flying over the copse.
Adur Fungi: Fruiting Times
Fungi of Shoreham

15 April 2004
Red Campion, Daffodils and Bluebells were in flower above the ridge on the upper slopes. The Violets were overgrown or diminished. A Kestrel hovered over the ridge and it dived, wings pinned close to its body for an impressive display. Brown-tail, Euproctis chrysorrhea, Moth caterpillars clambered over a Hawthorn. This moth species is a pest of fruit trees. 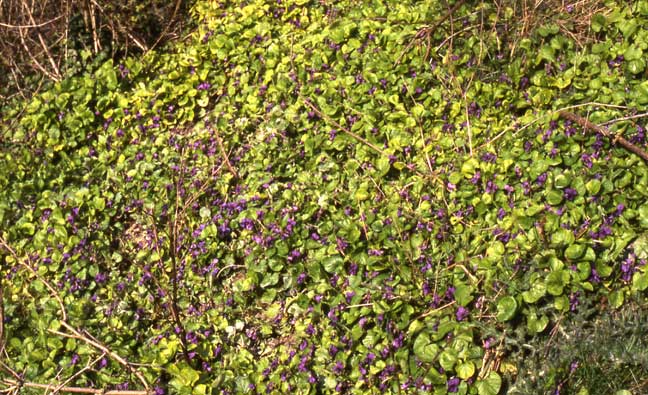 22 March 2004
The Sweet Violets at the top of the wooded slopes on the southern section of Mill Hill looked battered by the gales and hail of the last two days.
Violet Images from the Lower Slopes (Link) (April 2004)
Violets of Mill Hill

The Buff-tailed Bumblebee, Bombus terrestris, was the species present, a solitary one observed, and this is the commonest and most noticable local species.
British Bumblebee Checklist