The Sea Mouse is actually a segmented worm in the same phylum as the Common Earthworm. The  rather unusual name of Sea Mouse probably arose because of its colour resemblance to the rodent, when the worm is washed up on the shore covered in silt. However, the dense mat of grey-brown bristles on its back with finer, iridescent blue-green fur on its sides, can make it an attractive and interesting animal.  It lives buried head first in muddy sand and is rarely seen on the seabed. Occasionally the Sea Mouse may be revealed on the beach on the lowest spring tides.

The Sea Mouse attains a length of 20 cm, but most of the specimens I have seen (notably in the Lyme Regis Marine Aquarium) were only about 15 cm long. It is found in the sea off most coasts of Britain where there is suitable silt for it to bury in. Any observations on what it eats would be interesting. It may feed on other worms.

Seven annelid worms are featured in the Biomar CD-ROM, but not Aphrodite aculeata. 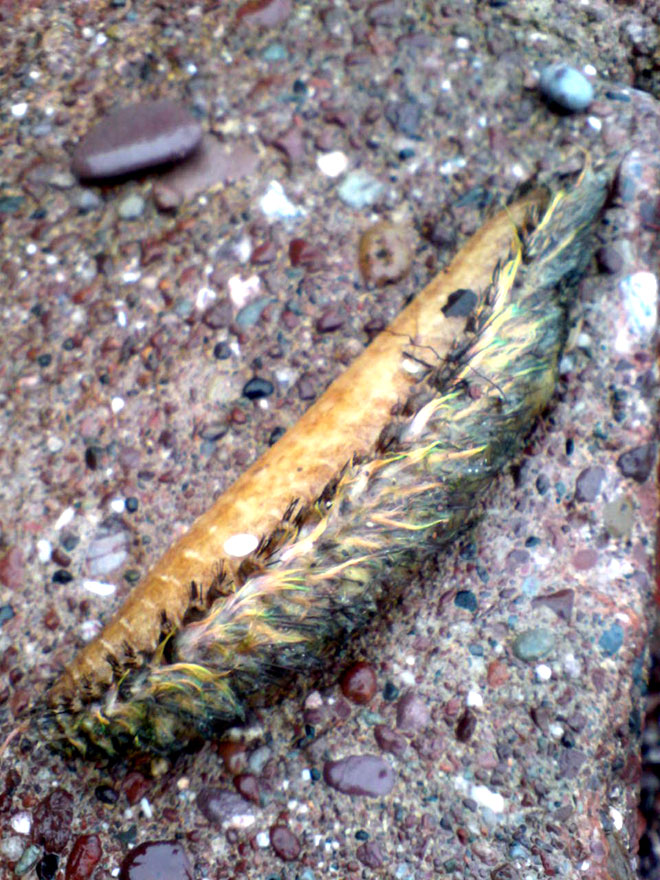 17 - 19 January 2010
After some easterly swells a dead Short-snouted Seahorse, Hippocampus hippocampus, and a Sea Mouse, Aphrodite aculeata, (a worm), were discovered on a beach near Dawlish, south Devon.

Report and Photograph by Ben Hersey

11 January 2008
I found something on the beach at Lunderston Bay, Gourock, Scotland.
It was the highest tide I have ever seen down there and was following the gales that struck the west coast during the week I always walk my dogs down there and look for things on the beach, I nearly died when I almost stood on my find (although it was unfortunately already dead).


I had no idea what it was so I put some pictures that I took on an equestrian forum I am a member of, most people said it was a sea cucumber but I wasn't convinced as I could not find any pictures online that looked the same as what I had found, then a girl who I think may have done taxonomy at university told us it was a Sea Mouse, Aphrodita aculeata.

Report and Photographs by Karen McGuinness

18 February 2007
About thirty Sea Mice (a large polychaete worm), Aphrodite aculeata, were washed up on Camber Sands (near Rye, East Sussex) about two hours after the high spring tide. 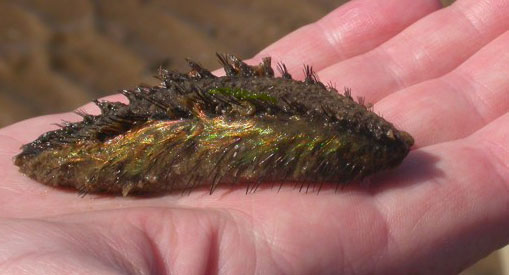 I found this animal washed up on Blackpool beach.  It was so interesting I photographed it.  It was unfortunately dead or I would not have disturbed it.  It was wet as I washed off dried sand which revealed its beautiful colours.

I found a rather strange worm / slug type creature during low tide at Pett Level in East Sussex. The creature was approx. 125 cm (5 inches in length) and 40 cm (1.5 inches) in girth. It was trying to burrow in sand. The top side of the creature had
many dark spines, with a fringe of green iridescent hairs. My family & I are familiar with many animals of the shoreline but have never seen anything like this..... we have had a good look through various ID web sites & have come up blank ! Could you
possibly identify this animal from my description ??

Your interesting animal seems to be the Sea Mouse (a annelid worm) Aphrodite aculeata, a deeper water species. I have never found one on the shore.