AT THE MARGINS OF SEA AND LAND

Spray whipped up by the crushing sea is sent miles inland. Endless pounding by the waves sculptures the coastline over the centuries. The force of the sea tosses large boulders around, and the rocky shore may be unrecognisable from one winter to the next. February is the coldest month, with sea temperature at the surface falling to 6oC in Scotland, and 9oC in the English Channel. However, the intertidal pools may fall much lower than this, as the air temperature falls below freezing point. (Seawater freezes at -2oC). Furthermore, the same pools may be diluted with rainfall, running in torrents from the land.

In contrast, summer temperatures in offshore surface seas that are a stable 14oC off the Scottish coast and 17oC in the south and west of England, can be amplified by the heat of the sun if the low tide occurs during the middle of the day (e.g. Sussex). In the higher pools, that are not refreshed by the incoming neap tides, evaporation may cause the salinity to rise above the standard 3.4% (at 15oC, the S.G. = 1.025), which is the normal figure in the North Sea, and in the coastal waters around most of Britain. Saline pools over 3.7% salinity (at 15oC, the S.G = 1.027) are described as metahaline. Conditions in pools near low water mark are exposed to the terrestrial explorer only for an hour or two at Spring tides, are likely to resemble the open seas.

As far as the seaside naturalist is concerned, or the aquarist wishing to study British fish and invertebrate life under controlled aquarium conditions, the ecology (science of the relationship of animals to their environment) of the shore is of essential interest. Generally, the sea is a stable environment, the salinity, proportions of essential salts, temperature,, oxygen content, nitrogen-ion balance (pH), varies between narrow parameters.

However, the littoral (shore) zone experiences greater variations. This has significance because the fish and invertebrate life that regularly inhabit the shore evolve special strategies to deal with the fluctuating environmental conditions. This means that they are often the easiest of marine creatures to keep in aquaria. With British species, the temperature needs to be kept low, below 19oC.

Briefly, two methods are employed to deal with the bionomical problems. They are:

1)  PHYSIOLOGICAL ADAPTATION
Fish and invertebrates are able to adapt to variable conditions because of the functions of their bodily organs.
Salinity
Shore and estaurine animals that are able to live in lowered salinities are called osmoregulators. their body fluids are controlled by the operation of a salt pump. These animals are few in number, distinguished on British shores by the Shore Crab, Carcinus maenas. Brackish water has a salinity of less than 3.0% (at 15oC, the S.G. = 1.022).
All marine fish drink water to avoid osmotic loss. They retain salts, especially sodium and chloride, at the same time. This osmoregularatory function requires high oxygen demands1.
Oxygen
The dissolved oxygen content in pools, aquaria, and the open sea is likely to fall as the temperature rises. At 22oC, the 100% saturation limit is 7.1 mg/litre, but consumption by fish, invertebrates and bacteria may reduce the content to 70% in rock pools and aquaria, or 5 mg/litre, which may be near the lower critical limit for sensitive species.
Most fish possess a buccal/opercular pump system for irrigation of their gills, and regulating the diffusion of oxygen from the water. In high temperatures, or after a heavy feed, the increased respiratory function of rock pool fish like the Blennies can be clearly observed. The Common Blenny will leave the water in such circumstances, and a tank containing these fish should have rocks above the surface. The Shore Crab will also breathe air through its gills. These shore animals are osmoregulators, but most fish respond to oxygen deficiency in shore pools by swimming to offshore waters.
Because of the lower temperatures if a cooling system is in operation, it is sometimes possible to increase stocking levels in excess of tropical marines.
Nitrogen-ion Balance (pH)
The pH of natural seawater is 8.3. In aquaria, a figure of 8.0 to 8.3 is acceptable. Supplements are available to adjust the pH and replace lost salts. In normal aquaria with biological filtration, the pH will fall, and an important part of the 25% monthly water changes is to maintain a pH above 8.0, which I monitor with an easy to use test kit.

2) BEHAVIOURAL ALTERATION
The most obvious response to unfavourable environmental conditions is simply for the animal to move, swim, crawl, or float, to more favourable areas. Fish, crabs, and other mobile animals migrate to and from the coastal pools according to the tides and prevailing conditions. The inter-relationship between the species and their environment is both complex and intresting, with innumerable possibilities.
Temperature
The effect of temperature is both direct, when the water is too hot or too cold, or indirect when the food supply responds to seasonal and temperature variations. Winter fauna on British coasts is typically exiguous2 with even the typical shore fish known as the Blenny (or Shanny) Lipophrys pholis inhabiting the warmer offshore waters.
In the middle of summer, the intertidal pools may heat up to over 24oC, which is too hot for the Arctic-Boreal and temperate fishes, like the 5-Bearded Rockling, Ciliata mustela. This is important when introducing specimens into aquaria when it is essential that temperatures of the water that the fish is collected  in is in equilibrium with the aquarium water. Fish can only slowly adapt to higher temperatures within their tolerance range, and a sudden introduction into seawater 5oC higher is likely to result in death. Sudden falls in temperature are likely to result in harm to open water fish.
Salinity
Invertebrates that are unable to control their salt balance and require fully saline water are termed osmoconformers. Sea-stars (Echinodermata) and corals (Cnidaria - Anthozoa) should be kept in salinities of 3.4%. Even the common shore Beadlet Anemone, Actinia equina, will not be found in areas of reduced salinity.
Notes:
1possibly up to 15% of the oxygen uptake.
2in the south-west, the winter fauna is sometimes prevalent.


SURVEY OF THE COMMONLY KEPT SPECIES

Between 1986 and 1989, I undertook a mail survey to discover the most popular species of British fish and invertebrates kept in home aquaria. I recommend that anyone wishing to keep British life should research into the needs of the various animals to see if they are suitable before taking them home to a properly established aquarium.
This will need to be done with care. I suggest the following methodology:
a)  Identify the fish or invertebrate, with scientific name. See guides.
b)  Discover the distribution range, and calculate the temperature range in which the animal can live. (This is crucial as no marine animal has been discovered to be able to survive in temperatures over 2oC in which it is naturally found).
c)  Research into the diet, and feeding habits of each specie.
d)  Research into further chracteristics, including its inclinations to prey on other creatures you may have collected.
e)  Discover how large the fish or crab will grow to.
In practice, it is only experienced 'rockpoolers' that will be confident in these aspects. Therefore I will provide details of the more popular species from all around Britain, as compiled from my survey: 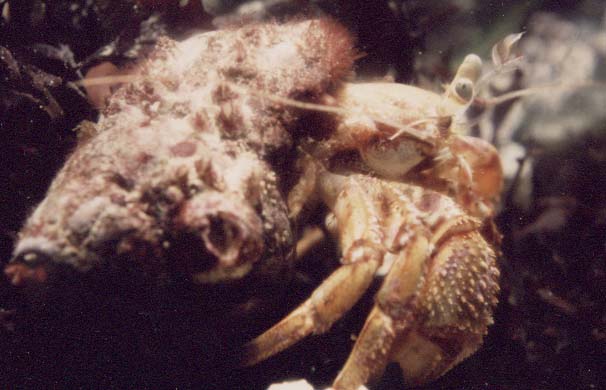 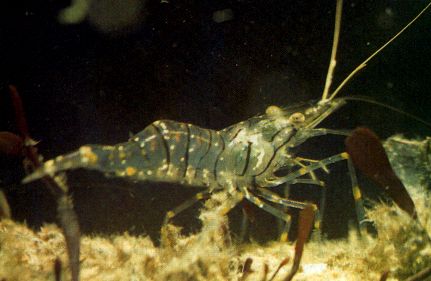 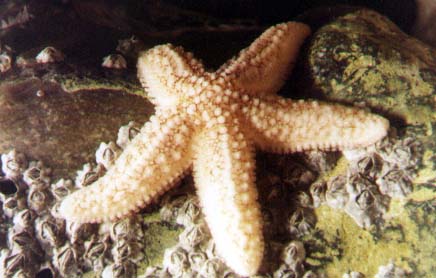 
Colour in 'British Native Marine Aquaria' is usually provided by sea anemones, and decoration and attachment points for the anemones obtained from rocks collected from the seashore.
A summary of other popular species will be included in later articles. If you have any further enquiries, please write to Andy Horton, British Marine Life Study Society, 14 Corbyn Crescent, Shoreham-by-Sea, Sussex. BN43 6PQ. SAE please.

If you do not receive a reply or acknowledgement to an EMail within two weeks, please write again