September 2004
A few reports of singles of Painted Ladies during the month.

3 September 2004
At least eight Painted Ladies were prominent on the cyclepath south-east of the Toll Bridge.

August 2004
A few reports of singles of Painted Ladies during the month.
Adur Butterfly List 2004 (including the Database)

July 2004
There were no reports of Painted Ladies during the month.

29 June 2004
On the cyclepath north of Old Shoreham there were one or two Painted Ladies.

June 2004
A few reports of singles of Painted Ladies during the month.
Adur Butterfly List 2004 (including the Database)

9 June 2004
On the cyclepath north of the Toll Bridge, just one faded Painted Lady Butterfly was seen in a brief visit.

11 February 2004
A Painted Lady Butterfly is seen flying at about 8 mph against a light breeze (about 6 mph) from the north-west near Lancing Beach Green (by the Sailing Club where the path narrows between the green and Widewater Lagoon). This butterfly appears to be an immigrant, probably on the long journey from Africa, possibly from France.
Another Painted Lady Butterfly was found on the edge of a golf course bunker at Benfield Valley Nature Reserve, Portslade (TQ 262 079) where the Blackthorn (=Sloethorn) was beginning to blossom. 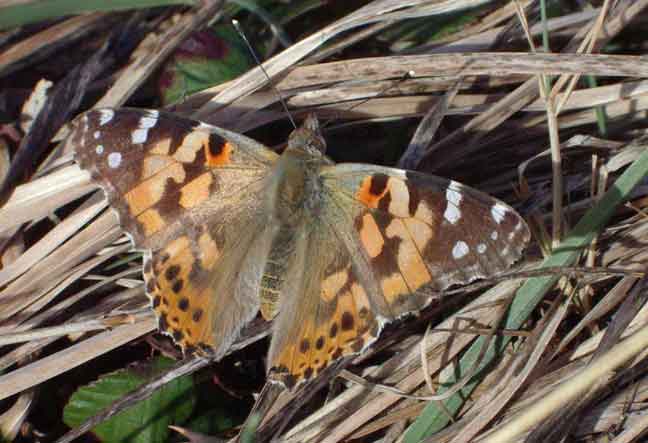 
Striped Hawk-moth, Ni Moth and Small Mottled Willow (77+ in total!) do not occur in northern Europe during the winter, yet they all turned up on the south coast between 3-6 February 2004, the same time as the majority of Painted Lady records. Over 200 Painted Lady have so far been reported to me between 3-10 February 2004. None were reported between 24 Jan-2 February 2004. Last year, a similar migration of Painted Lady occurred, at the same time as the moths, from 12 March 2003. No Painted Lady were reported before this date. I've also received reports of large migrations passing through the Canary Islands and Portugal between 5-8 February this year. The evidence backing migration is overwhelming, however 1 or 2 butterflies may have come out of hibernation in the warmer weather. This also appears to be the case with Humming-bird Hawk-moths. 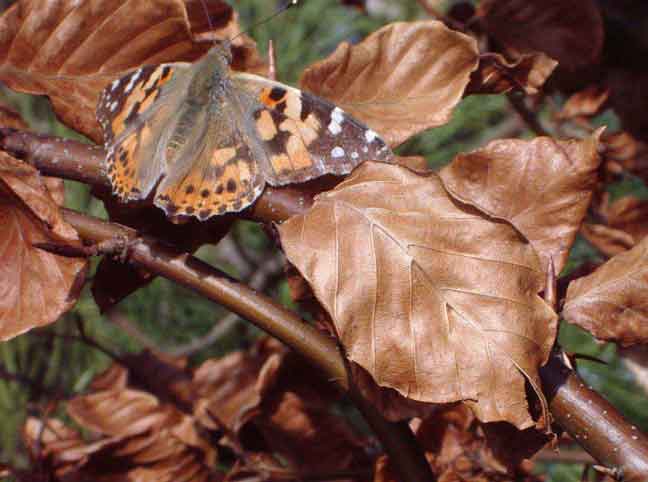 A flutter of orange and the unmistakable patterns of a Painted Lady Butterfly that flew steadily over the southern section of Mill Hill. Later, a second Painted Lady flew around the copse and settled on the Beech leaves still on the tree and several times on the grass. Could these be immigrant butterflies rather than hibernating adults? Although it was a clear cloudless day, the temperature only reached 6.5° C. The winds have been from the north-west for most of this week (last three days) and south-west for the previous week.
Weather Graph (February 2004)
The air temperature has remained above freezing for virtually all of the winter. (Painted Ladies may not be able to tolerate freezing conditions?)
Some lepidopterists tend to favour immigration, although amongst all the naturalists, the views seem to be about 50/50. I am tending towards the view that some adult butterflies have been able to survive the mild winter.
NB:  The last date on record for Painted Ladies in the Adur area last year was 10 October 2003.
Research has found evidence of Painted Ladies hibernating in Britain.
Immigration of Lepidoptera
Adur Butterflies
Adur Butterfly Flight Times

A further report of a Painted Lady Butterfly occurred on the northern part of New Monks Farm, Lancing.

Further Butterfly Report by Ray Hamblett (Lancing Nature)
on the Lancing Nature "Smart Group"
4 February 2004
As I walked out of the door to do the school run as a butterfly took off down the my front garden in south Lancing (TQ 186 044) carried by the light breeze. It was too quick to positively identify and in silhouette but seemed pale and may have been a Painted Lady. This is the first butterfly of the year. This the same location from which the last Painted Lady of 2003 was seen on 11 October 2003.
Butterfly Flight Times (Adur)
NB: Painted Lady Butterflies have subsequently been reported from other parts of Sussex including near Portslade railway station. The brief interlude of warm weather must have encouraged hibernating butterflies to emerge. The have no previous records of hibernating Painted Ladies surviving the winter on these Nature Notes pages and this is the first February record.
Butterfly Report by Ray Hamblett (Lancing Nature)
on UK-Leps (Yahoo Group)

30 September 2003
At least one Painted Lady Butterfly in south Lancing.

24 September 2003
Still the summer lingers on, but the temperature of 17.1 ºC on a sunny day falls below 20 ºC, as expected in the final quarter of the year.
On Lancing beach and in Lancing town there was at least one Painted Lady Butterfly in each area. 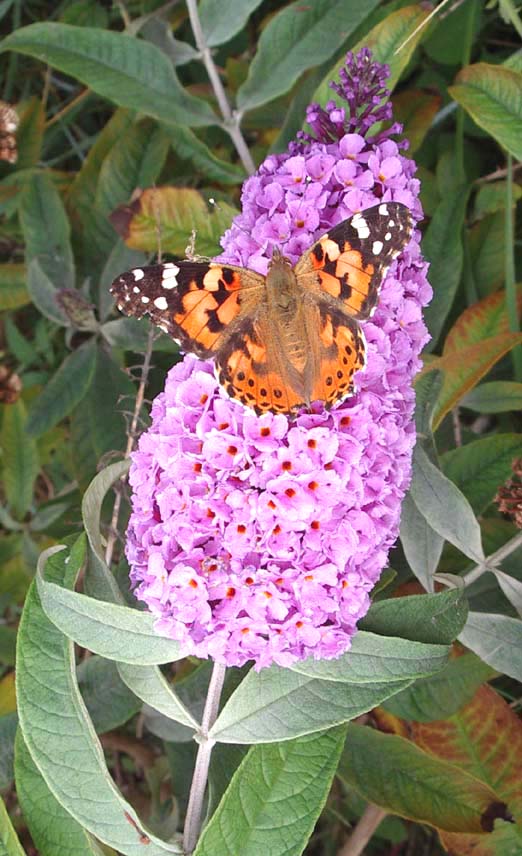 First impressions seemed to indicate an even greater influx of Painted Lady Butterflies than yesterday as a half a dozen danced around one Buddleia bush on the cyclepath south of the Toll Bridge. The predominant breezes were averaged from 225° azimuth (SSW).  See the notes on the life cycle of Painted Ladies below. The egg to metamorphosis takes only 23 days.

30 July 2003
On an overcast, cool, with brief sunny spells, light rain at times, it would be thought of as unpromising day for butterflies. The prevalence of immigrant of brightly coloured Painted Lady Butterflies (40+) on the footpath through the Lancing Ring meadows with the new reddish Small Tortoiseshells (25+) leaves me to speculate that the Small Tortoiseshell Butterflies were immigrants as well.

23 July 2003
Later in the afternoon the day's tally of butterflies was increased to fifteen with the additional sightings of Marbled Whites, Painted Ladies (20+), Wall Browns, Small Heaths and just one Small Tortoiseshell.
Adur Butterflies

26 June 2003
At the eastern end of the Toll Bridge, Old Shoreham, there was a single Painted Lady Butterfly (brighter than the recent ones) 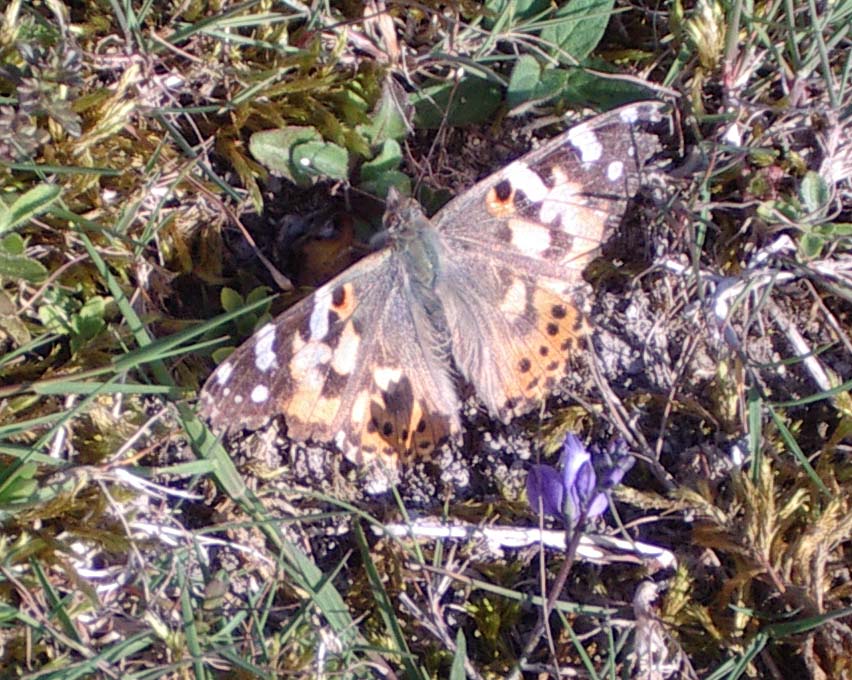 The old railway track at Old Shoreham had already shown a handful of Painted Lady Butterflies, all faded or dull, and the numbers steadily increased on the downs until I stopped counting at 50, of which only one was in a pristine colourful condition.

5 May 2003
I followed the Vetch Trail on the lower slopes of Mill Hill towards Old Erringham on a sunny May Bank Holiday Monday.  The Painted Lady was a battered specimen with parts of its wing missing.


These records show the main discoveries only. Other Painted Ladies are on record, too many to collate straight away.