15 December 2003
Small areas of the scrub on the middle slopes in the north-east corner have been cleared of vegetation including the instrusive Dogwood in the area I have christened as the Triangle. The amount of clearance could be compared to previous years, creating glades that have previously been favoured by Common Blue Butterflies. The red hues in the photograph above come from the low sun settling over the horizon as dusk approached. 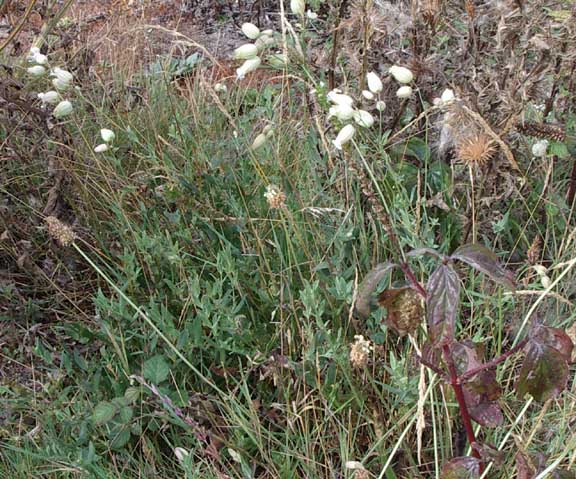 7 September 2003
Just two female Meadow Brown Butterflies were fluttering about. White Campion was seen in the area of the patch, and I had not seen it there before.

22 August 2003
Despite a small area in front of the seat being cleared by the South Downs Conservation Board (SDCB), the Dogwood encroachment is establishing itself quicker than it is being cleared. Cattle on these gentle slopes will not make inroads into this management problem. The small glades of four years ago (created by the West Sussex County Council Countryside Unit) have been completely overgrown.


The blue butterflies were a large handful of Chalkhill Blues, mostly battered females around the leaves of the Horseshoe Vetch and a few male Common Blue Butterflies nectaring on Bird's Foot Trefoil. There were mating Small Heaths, an occasional Meadow Brown and a single Clouded Yellow Butterfly. There was little flowering botanical interest. 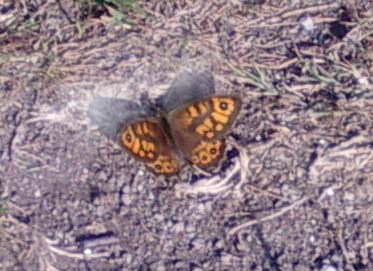 20 July 2003
A Wall Brown Butterfly patrolled the most direct path from the car park. On the triangle itself there was at least one Chalkhill Blue, but it was early evening and other butterflies would have been hiding.

11 July 2003
It seems that the management of this area (prior to year 2000) has conserved an area of special interest with a large number of Pyramid Orchids, Scabious, and most characteristically large expanses of the chalk sward parasitic and attractive tiny plant known as the Eyebright. There were some Stemless Thistles in flower. There were a handful of Marbled White Butterflies and Chalkhill Blues, and probably Small Skippers.

3 July 2003
On a humid and overcast late afternoon, I disturbed a Marbled White Butterfly flying towards the new flowering Scabious and longer grasses.  The Triangle supports and close knit community of the traditional chalkhill pasture of small ground hugging plants, like the Eyebright.

The cleared patch seemed to support only ruderal flora.

24 June 2003
The Pyramid Orchid, Anacamptis pyramidalis, was in flower in the triangle and there were at least a dozen, probably more than twenty amongst the grasses.

15 June 2003
Early afternoon on a sunny humid Sunday with butterflies on Mill Hill but not in this area where there was just one record of a Brimstone near the Triangle. (This Brimstone is out of its normal flight season. Although the possibility of an inadvertent misidentification for a Large White was examined, this is not thought possible.) This prominent species had been seen in this area last year.

14 June 2003
The Dogwood threatens to take over. The yellow was now the Bird's Foot Trefoil that attracted the attentions of a solitary unidentified (probably a Common Blue) blue butterfly. The Horseshoe Vetch has faded to inconspicuity. The Mouse-eared Hawkweed leaves (dark green rosette leaves with white furry hairs), Pilosella officinarum, seem to be common, but there seems to be no sign of the actual flowers.

2 June 2003
For some reason the Horseshoe Vetch in this area is running about five days later than the lower slopes. There are tiny patches of Bird's Foot Trefoil as well. Red-tailed Bumblebee, Bombus lapidarius, were working over the Horseshoe Vetch and a Painted Lady Butterfly (photographed) settled briefly.

26 May 2003
After some rainy and dull days, the sun came out again on the Bank Holiday Monday. No butterflies were seen in this area. There were more flowers and vegetation shown in the three photographs below.

9 May 2003
The Horseshoe Vetch flowers on the upper slopes later than down lower on the Vetch Trail. This is the first day this year I have recorded them.

It is unclear if the patch was created by conservation work or by an illegal barbecue fire.