RESCUE OF A RISSO'S DOLPHIN IN IRELAND

On Monday 14th June, The Marine Mammal Rescue Team backed up with the full technical support of Oceantec Adventures attended the scene of a stranded Risso Dolphin in the River Nore, outside Inistioge, County Kilkenny.  The MMRT linked up with  members of the local Civil Defence, Parks and Wildlife Service and South Eastern Fisheries Board who were already at the scene.

Inistioge is located 18 miles inland and the dolphin was seen to be swimming weakly (slowly, and often on its side) in fresh water ranging from 150 cm (5 ft) to a cut 365 cm (12 ft) in depth.  The dolphin's breathing rate was timed at two per minute. 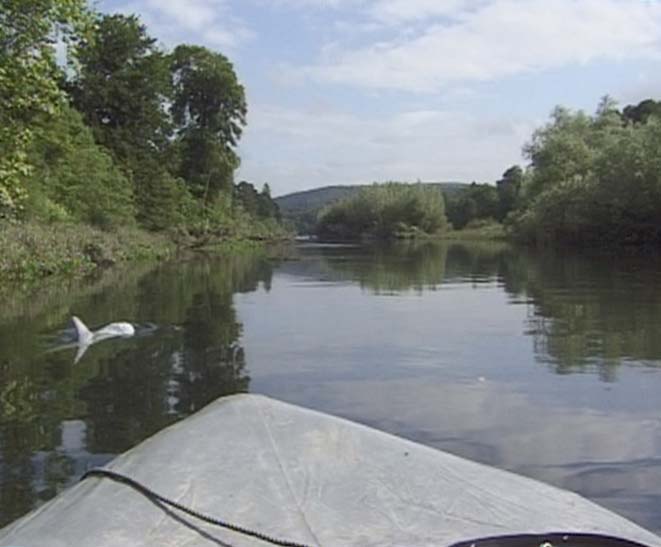 Under advice, it was decided to encourage the animal to return to the open sea through the two river systems of the Nore and the Barrow.   Four boats from the South Eastern Fisheries Board and Civil Defence were used to slowly encourage the animal to make its way downstream.  Occasionally the animal would turn about and head upstream but it would eventually be turned back using paddles and oars beaten in the water or on the boats to create noise to discourage this behaviour. 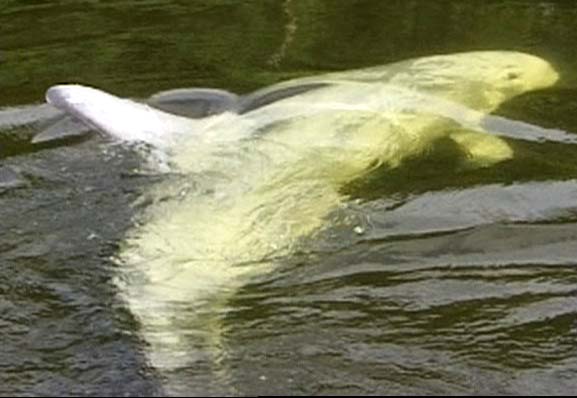 After two hours approximately two and a half miles had been covered with the Risso's breathing rate monitored at a steady two per minute.  It was also noticed that the two breaths would from time to time be taken in quick succession over the one minute period. The dolphin moved all across the river travelling along both banks as the well as towards the centre.  At one point the Risso disappeared for longer than a minute and was observed in difficulties in some riverside vegetation.  It submerged from view and after a few tense moments was spotted in open water further down river.


However it was not long before it disappeared again and this time could only be detected by the sound of its breathing from a side channel.

It was at this time that a RIB carrying members of the Customs and Excise Water Unit and Waterford Harbour Sub-Aqua Club moved in and provided vital assistance in what became a full rescue operation.  Agreeing that attempting to guide the now stressed dolphin back out though the thick vegetation would be extremely hazardous, it was decided that it should be lifted from the water into a boat.  Whilst stressed the Risso did not become physically agitated and was lifted without difficulty into a zodiac.  It was observed that it had sustained a number of superficial wounds to the head and lower body.  Whilst at this point it was late evening, a drenched cloth was placed over the dolphin's torso with great care taken not to let water enter the
blowhole. 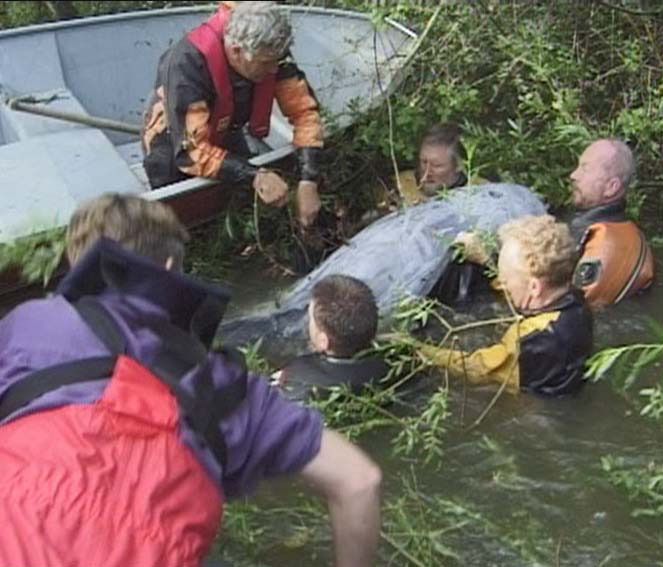 The journey by boat to the sea would have taken at least two hours so it was decided to transfer the dolphin to a waiting pick-up truck at a town called New Ross, and drive it to a slipway on the County Waterford coast at Dunmore East.  At New Ross members of the Irish Seal Sanctuary were able to provide assistance, and upon examination it was determined the mammal was male and somewhat undernourished.  At this point Vaseline was applied to the Risso's body for the journey to the coast.

Transit to Dunmore East was rapid, aided along by a police escort.  Four members of the "care team" stayed with the dolphin on the back of the pick-up, constantly dousing it in water.  The Risso's breathing rate increased to twelve breaths per minute, dropping back to nine towards the end of the journey.  At the slipway, again the dolphin was lifted into the water without any physical agitation and after approximately twenty minutes was released to swim slowly away.  Minutes later the Risso was spotted in the harbour area parallel to the slipway swimming strongly and surfacing about twice a minute.

The following morning reports came back stating that the Risso had been sighted between half-five and half-seven in the morning, heading out to sea past Dunmore Head.