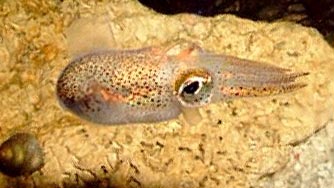 All the Sepiola collected were housed in a 24" x 15" x 15" all-glass aquarium with undergravel filter consisting of a 20 mm layer of fine beach sand over 30 mm of beach pea-gravel. Natural sea-water was used. Temperature was initially 18° C rising to 20° C.

Some turbulence from a small air-stone was provided. The tank was lit for eight hours daily with a 25 watt SUNGLO tube.

Sepiola all fed avidly on immature shrimp of between 10 and 30 mm which were provided in small numbers (10-12) at twice-daily intervals. (However they did not appear to take prawn of the same size range.) This fairly heavy feeding caused the nitrite level to exceed 30 ppm within six or seven days at which point the water was renewed with fresh sea-water at the same temperature. Water-changes were continued on this basis.

First evidence of breeding was noticed on 14th July when a batch of eggs was found at the water surface in the corner of the tank near the filter outlet where turbulence was at its maximum. Next day a dead cuttle was found in the tank. This egg-batch was subsequently added to considerably, eggs being laid above the water-surface as well as below it. More cuttles were found dead.

The first mating behaviour was seen on 16th July when a resting individual was seen to approach and "zap" a swimming cuttle with its feeding tentacles. The "zapped" cuttle appeared to convulse and change colour from sand to indigo. No ink was ejected. Next day this cuttle was found dead (it was recogniseable by having the tip of one tentacle missing).

Further evidence of mating behaviour was seen on several occasions subsequently. A resting individual would radidly approach and "attack" a swimming cuttle and wrap its tentacles around this individual. Both would sink to the bottom, rearrange themselves so that they were in the position shown and remain in this position for between five and ten minutes. After separation, the "attacked" cuttle would swim around slowly with its tentacles slightly spread and eggs could be seen at the centre of the tentacle ring. Egg-laying was never seen and was presumed to occur in darkness.

The first young cuttles hatched on 22nd August, 71 days after the first eggs were noticed. Five, each approx 2 mm total length, were seen swimming although more may have been resting. The ability for rapid colour-change and ink ejection was evident from the first day. Daphnia and brine-shrimp were provided as food and hatchling cuttles were seen to take daphnia (almost as big as themselves!) from day one. Eggs continued to hatch and  many hatchling cuttles could be seen swimming at once.


One day later, the junior shrimp net was repaired with a bolt and wing-nut and there were over a hundred Brown Shrimps off Lancing beach (east Widewater), a handful of South-clawed Hermit Crabs, Diogenes pugilator and a colourful Little Cuttle Sepiola, a small Sand Sole and flatfish fry.
Adur Intertidal 2006
BMLSS Prawns & Shrimps

This is not to be confused with the Bobtail Squid, Rossia macrosoma.