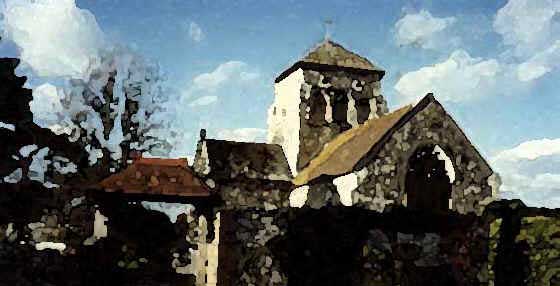 Like all of Britain the weather is highly variable. As warm as any part of Britain, second to a few areas in the extreme south-west. Warmer in summer but colder in winter. Mean 1% warmer than Gatwick Airport (altitude 59 metres) on the north side of the South Downs.

Nearby Worthing is arguably the second sunniest resort in Britain with between 1750 to 1840 hours of sunshine per year. Eastbourne is the other contender with 30 more hours.  Thames Valley = 1500 hours, Scotland = 1350 hours. 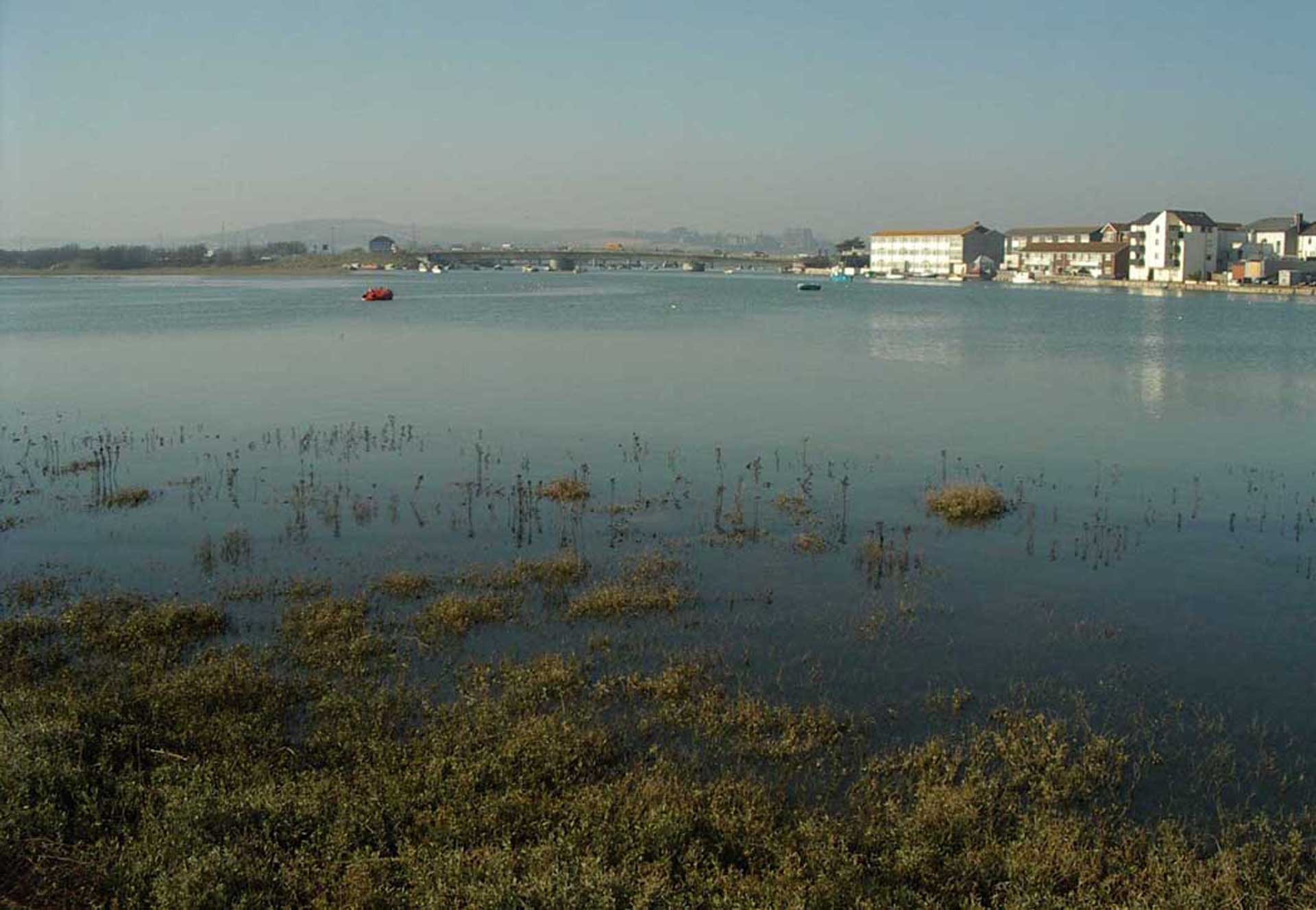 January is the worst month for snow lying with a mean number of days at 5.1 (1963-1972). This is much less than Kent, the county to the east. When blizzards occur north of the downs, the coastal region at Shoreham is likely to have a shallow layer only.

The above link has different statitics from above.

The centre of New Shoreham still retains its medieval street pattern, although the older small houses are early Victorian, with a few earlier buildings including the Marlipins. 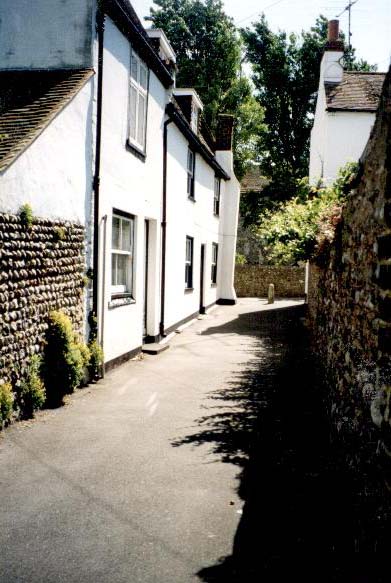 
Religion in the Adur District (Churches)

457 According to the Anglo-Saxon Chronicle (AD 477) three Saxon ships arrived in a part of Britain which was to be later known as Sussex at a place called Cymenes ora. King Aelle accompanied by three sons Cymen, Wlencing and Cissa landed from Gaul (France). In 465 (485) they fought the British at what is probably a boundary stream called Mearc redes burna *. None of these places have been identified with modern locations. Later they besieged Anderitum (now Pevensey) and killed all the Britons living there. The town to the west of Shoreham is called Lancing from Wlencing, and a few miles further to the west, Cissbury Ring acquired its name from Cissa. Evidence of early Saxon (pre AD 500) occupation of the area to the west of Shoreham is confirmed by barrow burial finds, but the main area of early Saxon occupation appears to be near Seaford and Pevensey 15 -20 miles to the east. Addenda: towns to the west of Shoreham are especially numerous with the Saxon ending 'ing'. (* enquire for toponymic references)

c. 680
In the 680s St. Wilfrid, (exiled Bishop of York) expelled from Northumbria, spent several years converting the South Saxons to Christianity. At that time their King was Aethelwalh (from Encyclopaedia Britannica). A Saxon Saint called Cuthman visited the Adur Valley spreading the word of Christianity (Cheal: History of Shoreham). Churches were built about this time, or two or three centuries later (see St. Nicolas Church).

1199 King John landed at Shoreham with an army and marched to London to be crowned. He succeeded Richard I.

1205 For three years, five Royal Galleys were stationed at Shoreham, making it as important as any Port in England.

1262 Simon de Montford, Earl of Leicester, in dispute with King Henry III, sails from Shoreham to France. (In 1264 Simon de Montfort led an army that defeated the King at Lewes in East Sussex.)

1295 Shoreham was made a Borough. New Schoreham was also known as Hulkesmouth after the ships known as HULCS that were the main trading vessels in European seas during Medieval times. Salt and woollen goods are likely to have been important exports at this time.

1347 Shoreham supplied 26 ships of war for the siege of Calais during the reign of Edward III.

1404 Shoreham suffered encroachment by the sea.  1493 is a date when the inroads of the sea washed away the southernmost part of the town. See Old Map.

1586 The greatest part of New Shoreham is ruined and under water.

(Although the residents of Shoreham did not know at the time, theoretical highest range of tides because of the alignment of the Moon and Sun in relation ship to the Earth occurs only every 1600 years with the last maximum around the year 1600. There were considerable floods all around the south coast of England and in the Netherlands.)

(The first Spanish Armada was defeated in 1588 opening the world for trade and commerce for British merchant vessels. The second Armada in 1597 is scattered by storms.)

1625 -28 Shoreham was an important port and shipbuilding centre. Ships were built near the current Norfolk Bridge. Nearby was the George Inn. 21 ships were built for Charles I. (At the start of the Civil War the English Navy had 82 under sail).

After the Battle of Worcester (3 September), Charles II had to flee from the Cromwellian forces. He eventually made his way to Bramber were he had to cross the substantial bridge over the River Adur. The route to the coast then followed the present hill route from Truleigh Hill to Old Shoreham via Mill Hill. The story then says he ventured to Brighthelmstone (Brighton) where he met the skipper of the Surprise, Tattersall, in a pub called the George. The King and Tattersall and crew boarded the Surprise which departed from Shoreham (15 October) for Fecamp in France when the tide was right.

1690-96 Seventeen Men-of-War built for the Royal Navy during these years.

1690-1790  Many trading vessels avoided import duties during the 18th century, smuggling the contraband in at night.

1703 A great storm shattered the town of Shoreham. This major storm of 26 November caused destruction on the English Channel coast of England killing over 8000 people.A record in 1760 showed that half the town had been washed away.

1781 The wooden bridge over the River Adur at Old Shoreham was built, replacing a ferry. The bridge was rebuilt to a similar design in 1916 and up until 1971 was the main A27 road for all traffic passing through Shoreham.

1787 (George, the Prince Regent commissioned the Pavilion in the village of Brighthelmstone, thus assuring the emergence of nearby Brighton as a premier tourist resort. He was crowned as King George IV in 1820 and visited Brighton until 1827. From 1796 to 1815 England was at war with Napoleon and troops were stationed at Brighton.)

1792 A highway robbery by a Shoreham man named Rook, an accomplice to Howell, on the mail at the Goldstone Bottom resulted in the execution of the perpetrators by hanging. The recovery of the bones from the gibbet by Rook's mother, inspired Tennyson's poem 'Rizpah'.

1807 Turnpike Road to Bramber and Steyning. 1822 Road to Brighton. 1826 Road from Old Shoreham to Worthing.

1821 The permanent entrance to Shoreham Harbour was completed at its present location. This was important because the longshore drift of shingle had caused problems for centuries. In 1832, 1200 ships entered the port.  An average of four vessels a year were built in Shoreham during this decade.
History of the Adur Estuary (by H. C. Brookfield 1950-1)

A regular Steam Packet sailed to le Haura and Dieppe in France. A Custom House was constructed in 1830. This building which became the Town Hall up to the 1980's is still standing. (In 1847, nearby Newhaven took over as the cross-channel port of Sussex.)

1833 The Norfolk Suspension Bridge was opened. It was the same design as the famous Chain Bridge that crosses the River Danube between Buda and Pest in Hungary. The first Norfolk Bridge was designed by W. Tierney Clarke and Captain Samuel Brown. It was replaced by a Bow String Girder Bridge in 1922, which was in turn replaced by a Concrete Box Bridge in 1987.

1840 Railway opened to Brighton with stations at Shoreham and Kingston. By 1845 a line including a wooden Trestle Bridge (replaced by current steel bridge in 1911) over the River Adur was opened. By 1844 trains went to London via Brighton in 2 hours 38 minutes.  By 1861 the branch line to Horsham was opened. From 1879 the direct line to London was opened through the Cliftonville spur and tunnel in Hove. Kingston railway station closed in 1879.

1855  The Canal, the eastern arm of Shoreham Harbour is opened from Southwick to Aldrington Basin.

1877   The building of larger steam-driven vessels brought about the end of Shoreham as a shipbuilding centre. 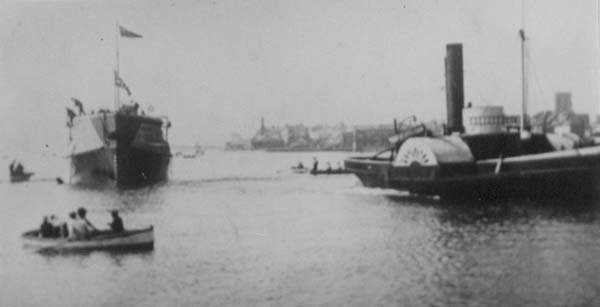 1880  Steam trams run from the Swiss Cottage Amusement Park to Hove. After the turn of the century the steam trams were replaced by horse-drawn vehicles and the tramway ceased altogether during World War I.

Albion Steam Brewery at the east end of High Street

Marlipins building and the George Inn at the end of the 19th century.

1938 Passenger air services in operation from Shoreham Airport to Jersey, Birmingham and Liverpool. The railway station serving the airport was originally called Bungalow Town Halt (opened 1910), but renamed Shoreham Airport Station (in 1935), the first station to serve an airport in England, in 1930. 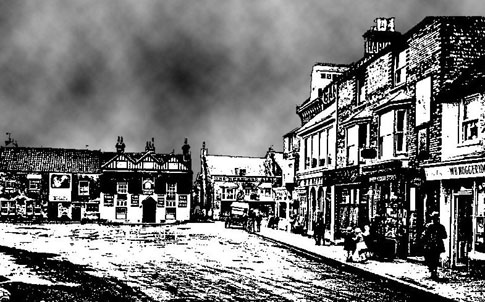 Shoreham High Street in the 1930's looking west towards an area known as the Ropetackle that remains undeveloped  into the New Millennium. The pub called the King's Head closed in 1983 and was demolished about 7 years later.

1966 Railway branch line to Horsham axed, although the line to the Cement Works remained in operation for freight traffic. The freight sidings to the wharf at Kingston (River Adur in Shoreham boundaries) closed in 1968.

References include books by Henry Cheal and Dr Peter Brandon