The Three Spined Stickleback, Gasterosteus aculeatus, is usually thought of as a freshwater fish, shoaling in both running and still waters. It is characterised outwardly by its very silvery appearance when viewed laterally but with a greenish brown appearance from above. The Stickleback has plates in place of scales to protect its body which enhances this shiny image. It is one of three Stickleback species found in and around the British Isles. 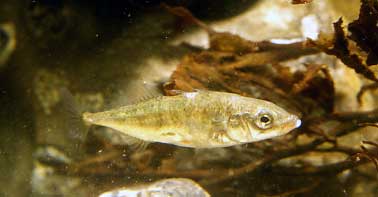 This species is known to be an efficient osmoregulator and can be found in the lower reaches of rivers and in the salty ditches draining into them. There is a thriving population of them in the Widewater lagoon located a few hundred metres from the beach at Lancing, (near Shoreham-by-Sea), West Sussex, England, UK.

Widewater is a landlocked brackish lagoon approximately 1200 metres long and 50 metres at its widest point. It was created from the original Adur estuary having been landlocked by longshore drift and violent storms. The waters are replenished by the sea, which filters up through the basin of the lagoon on very high tides, and also by rain water. The low lying land to the north is very marshy and although not visible, some water must drain by subterranean routes into the lagoon since there is a dramatic rise in the level after heavy rainfall. Man has built up banks on the perimeter of the lagoon to prevent flooding to this nearby reclaimed land, now turned to residential use.The salinity therefore is liable to fluctuate wildly as does the quantity of water contained within the lagoon.

In Widewater, Three Spined Sticklebacks are particularly interesting since they demonstrate extraordinary resilience. They are present in obvious great numbers despite the lagoon having dried up to a few puddles in recent drought years such as 1995. Since both fresh and marine water only enter Widewater by percolation and rainfall the present population is likely to have regenerated from the few that survived the drought.

They appear to be the only species of fish present in the lagoon although a more thorough investigation might reveal others. I would suspect the presence of Eels but I have not heard of any sightings or catches. Certainly no marine species of fish have been recorded although through the years it is hard to imagine that none have been released by children or anglers returning home from the beach. In contrast, every other species of animal present in the water are of marine origin.

The Sticklebacks of Widewater are sorry looking specimens compared to their freshwater brethren. Each and every individual is covered from nose to tail in black-spot disease. Some are so heavily covered that hardly any of the natural silver coloration can be seen and have the appearance of having been pebble-dashed with soot. In freshly caught specimens the sexes are difficult to differentiate between, even in the breeding season. The males may give themselves away perhaps with their blue corneas or smaller size. The well known reddened breast of a courting male is completely obliterated by black-spot in most cases, at least initially. In addition to this almost overwhelming parasitic burden, many have distended abdomens which I initially took to be females with roe but later become suggestive of intestinal worms*. Deformities are not uncommon, the spine often deviating grotesquely or the jaw distorted. Most specimens seem malnourished looking wasted despite their voracious appetites. This makes them easy to catch. (*The Sticklebacks are also likely to be infected with the tapeworm Schistocephalus solidus.)

In June the shallows of the lagoon abound with fry swimming in shoals. I caught about 30 of them to see if I could rear these at home and observe them. At the time of capture the average length was 7 mm. It was not possible to tell the age but they are known to start shoaling at about two weeks. At this stage they were not recognisable as sticklebacks to the naked eye. As I had not anticipated capturing these fry, I was merely out for a walk, I had no aquarium specifically prepared for them to emulate the conditions of Widewater. I did however have a five foot (180 litre) aquarium in the lounge recently vacated by ornamental goldfish and it was into here that the fry were released. I was particularly interested to see if at such an early age the black-spot disease would have become established. In addition I was keen to see if they would develop into typical specimens as seen locally in fresh water or demonstrate the characteristics of the unhealthy population of Widewater.

The aquarium had gentle filtration from a Fluval 3 internal capsule filter with supplementary aeration. It was lightly planted with pond plants and had a large population of freshwater whelks. After the goldfishes exit the aquarium had developed a teeming population of tiny animals. In view of this I decided against artificial feeding. There should have been adequate live food present for the small fish.

Upon release, all of the fry initially survived. A few fish had deformed spines and swam awkwardly. Others were clearly having buoyancy problems and adopted a position on the gravel being unable to swim for extended periods. The majority were free swimming and sheltered in the weed and edges of the tank. Within a few days the deformed and disabled fry disappeared and after a month the original 30 translated into a half dozen very healthy looking small sticklebacks. After a further month there have been no further fatalities and the fish are large enough to be seen clearly. Artificial feeding has not been resorted to yet.

The majority of specimens have a light attack of the black-spot disease. In every other respect they appear the same as the local freshwater sticklebacks, in the juvenile form and the aquarium specimens have grown in a more streamlined and muscular form than those in Widewater. The presence of rapidly running water from the filter pump and the competitive nature of the aquarium may have encouraged this. The filters jet stream is a popular place for the fish to swim.

I have also taken some adults and kept them in freshwater. The adaptation to the new environment was uneventful and within minutes the fish were foraging for food. After several weeks the black spots flatten out and become areas of grey pigmentation compared with the raised circular lesions of freshly caught specimens. The disease does not appear to be active. In contrast the abdomens have tended to become increasingly distended. This is despite a good live food diet on a regular basis which seems to encourage the parasitic worms to flourish rather than the fish. One specimen developed ascites (dropsy) after two months and had to be destroyed.

The position of the adults aquarium is in a conservatory where fairly extreme temperature fluctuations can occur. I have been initially anxious and then surprised at their ability to tolerate rapid rises and falls in temperature, their behaviour being consistent at all times.

This years experiences with the Sticklebacks have focused my interest in Widewater generally and I hope to set up a large aquarium or even a pond to emulate the conditions of the lagoon. A renewed survey might also be appropriate to update those of a decade or more ago. In the meantime I still have the Sticklebacks and hope to learn more from them.

Osmoregulation:  ability to control the volume and composition of body fluids, especially to adjust the salt balance to cope with different salinities.

Photographs of this species at:  http://www.gen.umn.edu/faculty_staff/hatch/fishes/threespine_stickleback.html