For the last 10 years, the Sussex Regional Group of the Sea Watch Foundation has recorded information about the whales and dolphins off the Sussex Coast. Apart from recording the live Cetaceans (whales and dolphins), we also have an interest in dead strandings. This is partly due to my overlapping role of Sussex County Recorder for Marine Mammals and Regional Rescue Co-ordinator for Southern Marine Life Rescue. However, a collaborative project set up by the Sea watch Foundation in 1994 the Channel Dolphin Workshop identified 135 bottlenose dolphins that were identifiable as individuals by natural markings. It became important that all bottlenose dolphin strandings were checked to see if they matched any of these known animals.

In the latter part of 2000 and early 2001 came a batch of strandings starting with a 15 foot whale washed up on Shoreham Beach (West Sussex) on the 30th October 2000. Although early suggestions were that the whale was a minke whale (baleen whale species) the size also matched that of a pilot whale (toothed whale). I was unable to attend the stranding due a torn muscle in my leg, however I favour the species as a pilot whale as this species is know to migrate along the English Channel at this time of the year. The whale was heavily decomposed and the head, and fins were missing, so identification can only be verified by DNA sample.

On the 20th December 2000 I received a call from Southern Marine Life Rescue that a dead porpoise had been stranded on Bognor Beach (West Sussex). The specimen was very fresh and was collected by the Natural History Museum in London for autopsy.
I will receive a copy of the autopsy soon.

A small cetacean was washed ashore at Worthing sometime at the end of January 2001. Sadly neither myself or the above mentioned partner organisations were contacted and the animal was disposed of and we only heard about it over two weeks later through the local paper. The animal was reported as a juvenile but could well have been a porpoise, which are smaller in size than dolphins.

On the 8th February 2001 a dolphin, possibly a common dolphin (by second hand description), was washed ashore at Pevensey Bay. Sadly due to the late reporting of the dolphin we were unable to attend. The original person who reported the stranding lives in Pevensey but works in Brighton. He only reported the stranding after he had got to work and by then the animal had been washed back out to sea. Long-shore drift could have taken the dolphin many miles away. The Pevensey office of the Environment Agency checked the beach that day and the two following days but nothing was ever recovered. The dolphin appeared to be quite fresh and may have given us valuable data, including the cause of death.

On the 12th February 2001 I was called to another stranding on Shoreham Beach, not far from the whale last year. The two dolphins were almost certainly common dolphin, however they were partly decomposed. One specimen was 2 metres in length, the other 2. 3 metres. There were also markings on the body that suggested that they had been accidentally caught by fishermen and thrown overboard, however this may not necessarily have happened in Sussex waters. It is the job of the Natural History Museum to verify the cause of death and I await their findings from the data we sent them.

On the 13th February 2001 a common porpoise was washed up on Bexhill on Sea.

It is difficult to know at this stage if this number of dead cetaceans is usual for Sussex or not. Certainly we would not usually have this many animals washed up on Sussex beaches, however, exceptional stormy seas may have brought up animals that would normally remained on the sea bed if not for this weather. While stories of dolphin deaths from capture in fishing nets make the news headlines, such stranded animals also die as the result of natural or unexplained reasons. 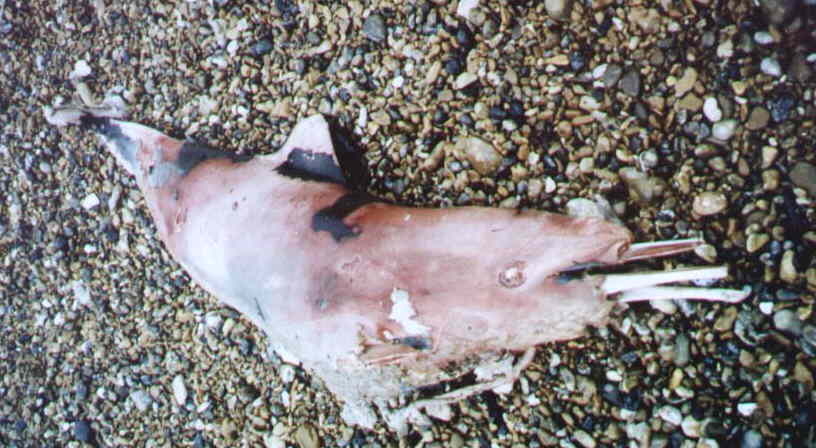 Two badly decomposed Dolphins were washed up on Shoreham Beach, Sussex. They were badly decomposed but were probably Common Dolphins, Delphinus delphis. A Porpoise, just over a metre long, was washed at nearby Worthing.
Sussex Dolphins
Sussex Cetaceans 2001
Sussex Sea Watch Foundation News 2001

It should be relatively easy to determine between bottlenose or common dolphin by the teeth or tooth sockets if the lower jaw or skull is still present. Bottlenose dolphin teeth are large, roughly the size of your little finger - whereas CD teeth are needle like and lots more of them.

The main problem with ID is between common dolphins and striped dolphins. Once the outer skin has gone they appear identical having similar sized teeth, the only way to tell the difference is to put your "gloved" hand
into the mouth and feel the upper palate, if you can feel two parallel grooves running from the front of the beak to the back approximately 25mm apart then its a common dolphin, no grooves and its striped.

If you are able to examine the carcasses, Richard Sabin at the Natural History Museum would be pleased to receive your records. His email is R.Sabin@nhm.ac.uk