It is helpful, but not essential, to understand the reason why the tides vary in height and time on different days. A Tide Table, available from newsagents and ship's chandlers in seaside towns is indispensable. Usually, only the times of high water in G.M.T. are shown (add one hour for B.S.T.,Summer Time), but expensive tables should also show low water. In practice the rockpooler should ensure his arrival about four hours after high spring water, to give him just over two hours to follow the ebbing tide out before it turns. 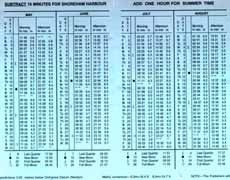 Twice daily, the tide comes in, and each day it will be approximately 50 minutes later than the previous day. Astronomically, this is because as the Earth moves around on its axis every 24 hours, the Moon during the day and night moves through one-thirtieth of its orbit around the Earth. This means that it will be approximately one-thirtieth in a different position  24 hours later.

This, of course, influences the tides because of the importance of its gravitational pull on the world's oceans and seas. The water pull is best visualised as a horizontal movement, not as a vertical up and down movement as viewed from the shore. A few visits to the seashore will indicate that there is a considerable variation in the height of the tide from week to week.

(1)  Highest Spring Tides - Moon and Sun in conjunction, with combined gravitational pull producing the highest tides. High tides on the opposite side are due to the centrifugal force of the Earth's rotation.
The highest tides in England occur about two days after the New Moon.
(2)  Neap Tides - Moon's orbit moves towards 90° to that of the Sun, when they are at quadrature, and their relative pulls, about 7 to 3 in favour of the Moon, result in Neap tides, with smaller variations.
(3)  Spring Tides - Moon and Sun in opposition, with combined gravitational pull.
(4)  Neap Tides - Moon's orbit moves toward the quadrature.

The highest spring tides of the year occur after the equinoxes in March and September, and these tides are often the best time to visit the shore. However, the weather may not be so good, and rain and gales are frequent. The Tide Tables cannot be relied on for precise highs and lows of the tides. A storm surge out in the Atlantic can put at a metre on a high tide in exceptional circumstances, and the wind can also prevent the tide from receding as much as it should.

It is interesting to note that high spring tides occur at approximately the same time of the day every year in each location on the coast. This means that low springs occur at dawn and dusk in mid-Sussex (Brighton) but occur around the middle of the day in south Devon (Torbay). This has practical and social significance to rockpoolers. Tides around the Solent occur four times a day.

The configuration of the shore has a large bearing on tide heights and range, tending to increase in bays and funnel-shape inlets like the Bristol Channel and St. Malo, near the Channel Islands, in France.

Welcome to Admiralty EasyTide the most comprehensive tidal prediction service on the Web. The service provides tidal data for over 7000 ports worldwide together with a host of other useful information.

EasyTide has been improved, now enabling you to select the date of your prediction. Choose any date between 100 AD and up to 50 years in the future and access tide predictions for 7 or 14 days at a time.