It is not a true blenny and belongs to the family Tripterygiidae. Fish of this family are small and inhabit rock crevices below low water mark in much the same way as many of blennies do. However, they have three dorsal fins and scales, whereas true blennies of the family Blenniidae have a single dorsal fin running the length of its body and have a mucus covered skin. Exactly how common, or how rare, the British Black-faced Blenny is can only be ascertained by divers' reports. They may have to be searched for because they are secretive. They are also highly territorial and will stay in an area of about three square metres. Wheeler reports the British species growing to a length of 68 mm. Two pairs have been seen in the Fleet along with Corkwing and Ballan Wrasse and Tompot Blennies. 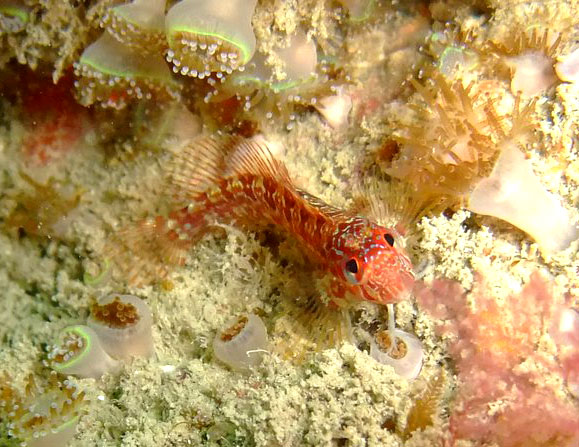 Juvenile Black-faced Blenny
Tripterygion delaisi  Family: Tripterygiidae
in the shallow seas around the Isles of Scilly
discovered by the Seasearch Divers
Photograph by Angie Gall
(Isles of Scilly Wildlife Trust) (on Facebook)

I saw about a dozen (total) male Black-faced Blennies, in full breeding colours of black head/bright yellow (cellophane-like) body/bright blue edgings to fins. This was on two dives on Sunday 25 June 2000 inside the middle breakwater of Portland Harbour, on the stones of the breakwater at 5 to 10 metres depth. There were perhaps 8 on the breakwater near the 'Countess of Erne' wreck, and 4 more later in the day near the 'Landing Crafts'.

The fish were approximately 10 -12 cm (4 to 5 inches), and generally perched on the side of rocks; though obviously they tended to retreat under overhangs or into large holes/gaps etc when disturbed. They were almost certainly associated with females as well - but I was not alert to the differences between the latter and gobies (which were very plentiful as well) so I didn't identify any females.

Conditions were generally very silty (though less so on the stones than on the wrecks) and rock coverage was mainly by sponges with some hydroids, squirts and bryozoans. The localised sea squirt Phallusa mammilata was also present in the general area, though not particularly where the Black-faced Blennies were seen.


14 August 2003
A Black-faced Blenny, Tripterygion delaisi, was discovered in a rockpool at Les Écréhous, Jersey. This is my first record of this fish discovered on the shore. It was about 55 mm in length.
Report by Nicolas Jouault
on the Marine Wildlife of the North-east Atlantic Ocean Group
This page uses the template design from the BIOMAR CD-ROM  (as an experiment).