16 November 2009
A Red Fox ran across Middle Road and quickly climbed up a Fir Tree on the north edge of the open space west of Church Green, Shoreham, just before midnight.

9 November 2009
Jays were seen on two occasions in Shoreham town gathering acorns from Evergreen Oaks at the top of Oxen Avenue and at the far west end of The Avenue, Old Shoreham.

Early November 2009
Nipplewort and Annual Wall Rocket were frequently seen on the wall-pavement edges and in cracks in the paving in twittens in Shoreham.

13 October 2009
Butterflies seen over Southwick and Shoreham in the morning were one Clouded Yellow, three Large Whites and two each of Speckled Woods, Painted Ladies and Small Whites. The Clouded Yellow was seen flying across the western approach to Southwick Square and the two Speckled Woods were courting over a Yew sapling in St. Julian's Churchyard, Kingston Buci.

17 August 2009
Four thrushes landed on the grass at the top of Buckingham Park. Their appearance appeared incongruous and I was curious to discover what species they were before I frightened the ground feeding birds into flying into the shelter of a Horse Chestnut Tree. Although the birds did not seem any larger than than normal, the overall grey head appearance leads to be to identify them as Mistle Thrushes.

13-18 August 2009
Southern Hawkers (dragonfly) are seen in each of the five days, in ones on the edge of Shoreham town, over the residential areas of both Shoreham and Southwick.

4 August 2009
A Wall Brown Butterfly fluttered across Middle Road, Shoreham through the wire fencing and into the trees in Middle Road Open Space.

8 June 2009
An afternoon outing on an overcast day on the southern side of Buckingham Cutting, the small blue butterflies amongst the Brambles were all Small Blues and the estimate was 75+ in this small area. My first Marbled White Butterfly of the year made a sudden appearance.

There were eight species of butterfly seen in an hour on a cloudy afternoon including frequent Speckled Woods in Buckingham Park, Shoreham.
Full Butterfly Report

26 May 2009
The mass immigration of Painted Lady Butterflies was astonishing, throughout the morning over Southwick and Portslade the Painted Ladies exceeded two a minute for an hour and were over one a minute the rest of the time, with large numbers (100+) in Portslade Cemetery and on the main road that traversed Hove Cemetery, the butterflies flew across the road at over 30 every minute for five minutes in passing. The conservative estimate was at least 500 seen as I cycled along the urban roads. Occasionally a Large White Butterfly was spotted.
Adur Butterfly List 2009

11 May 2009
My first Slow Worm of the year was a large adult on the tarmac twitten between Rosslyn Avenue and Gordon Avenue in the Shoreham residential area. They are seen in this twitten every year.

9 May 2009
Foxes are hardly newsworthy nowadays, but at 9:00 pm one young Fox boldly trotted from the Catholic Church of Saint Peter due south down West Street in a part of town with small rear gardens and only a few pocket front gardens on the west side.

20 April 2009
A visit to the overgrown Mash Barn Lane, Lancing, recorded easily 20 Speckled Woods, some mating, around five Holly Blue, a female Orange Tip, a Comma, two Small Tortoiseshell, a Brimstone, at least one Small White, two or more Peacock, all seen in a small area and in around 15 minutes watching time. Eight species.

Report by Ray Hamblett on the UK Leps Yahoo Group

1 April 2009
A Small White Butterfly flew over a garden in Dolphin Road, Shoreham.

12 March 2009
I was surprised to see a Yellowhammer fly into a tree in Portslade Cemetery.

21 February 2009
The first Daffodils of the year were seen on the edge of the unadopted thoroughfare next to the Hamm Road Allotments in Shoreham town.

20 February 2009
A small flock of about eight Great Tits were seen in the trees at the western end of Rosslyn Road, Shoreham.

19 February 2009
The first handful of Lesser Celandine flowers are seen amongst the grass on the Withy Gap, Lancing.

16 February 2009
The first Snowdrops of the year were seen in the churchyard of St. Julian's in Kingston Buci. 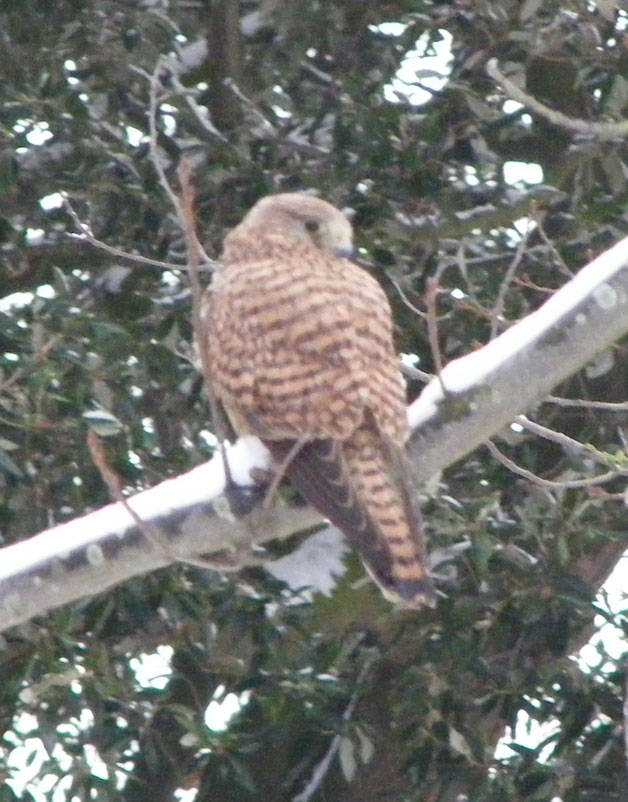 8 February 2009
As the rain poured down, a pair of courting Jays were making a racket with their chattering calls in the front garden immediately to the west of Querneby Close in Kingston Buci, east Shoreham.

2 February 2009
In St. Mary de Haura Churchyard in central Shoreham I chanced upon a resting Sparrowhawk.

20/21 January 2009
Foxes were both energetic bold and two particularly were noted nearing midnight, one at Kingston Buci leaping over a wall into the school grounds, and another in Middle Road, Shoreham, in healthy condition and distinct under the street lamps.

There was a considerable amount of feathery Hoar Frost in the morning. The 'feathery' variety forms when the surface temperature reaches freezing point before dew begins to form on it.
Shoreham Weather (Met Office)
Adur Weather 2009

3 January 2009
The first bird of prey of the year was a Sparrowhawk swooping between the houses in Buckingham Road south of the Mill Lane junction.

1 January 2009
My first bird of the year seen was an unidentified gull, probably a Herring Gull on the roof opposite my window in Corbyn Crescent, the residential part of Shoreham-by-Sea, followed by a handful of Starlings and looking out over the back garden, a small flock of House Sparrows congregated in the high shrubbery.