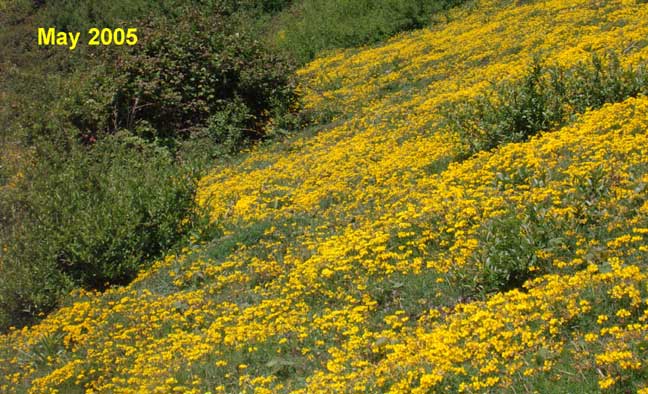 MILL HILL:  Vetch Trail (Lower Slopes) : Shoreham Bank
45° ungrazed unimproved slope with an extensive Horseshoe Vetch in May and herbs and grasses below 40 mm in height

21 September 2004
These two miniature flowers of two separate creeping plants appeared amongst the herb layer on the lower slopes of Mill Hill:

The depth of field was limited by the poor light on an overcast day.The diameter of each flower was not measured but estimated to be less than 10 mm across. Neither of these small flowers were plentiful, and only one plant of each was spotted, although there could have been more.

16 September 2004
It took until just after midday before I saw my first Small Copper Butterfly of the year on a clump of Devil's Bit Scabious with at least three Meadow Brown Butterflies, one Small Heath, and two Common Blue Butterflies all at the same time, at the northern end of the lower slopes of Mill Hill. A few Dog Violets and at least one Dropwort was in flower out of their normal spring season.
Adur Violets


Butterflies numbered under a hundred in 25 minutes on the lower slopes including a total of 25+ Meadow Browns, 15+ Small Heaths, 10+ Common Blues, 1+ Small White, 1 Large White, 1 Small Copper and one Wall Brown (near the Wayfaring Bush by the path). One particularly worn blue butterfly, so worn it could not be identified, although probably a Common Blue, seemed to follow me wherever I went.
Adur Butterfly List 2004


15 September 2004
After the gales and late in the afternoon, it was unlikely that I would spot more than a handful of butterflies on the lower slopes of Mill Hill in the fading light. The butterflies could still be around but they had already chosen to roost and two Small Heath Butterflies were actually discovered roosting on two Devil's Bit Scabious flowers, so torpid that they did not fly off even when tickled. This was despite an air temperature of 17.8ºC at 5:00 pm.