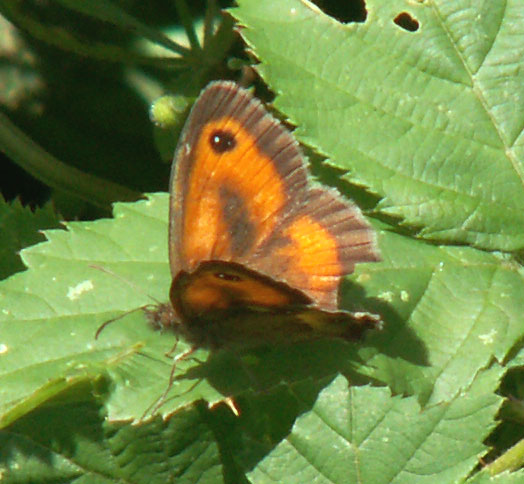 (The Pixie Footpath entries will be on their web page only)
Waterworks Road and Pixie Path to Mill Hill transect is 525 metres long (Magic Map)
When I went to St. Nicolas School in the early 1960s this was at the foot of a bare (no scrub) Mill Hill.


5 August 2007
A couple of Speckled Wood Butterflies were courting rising up to a height about five metres fluttering around each other over the Waterworks Road, Old Shoreham. This behaviour was seen on a few occasions in the last few days. A Southern Hawker (dragonfly) flew even higher.
Full Butterfly Report

4 July 2007
On the footpath section of the Waterworks Road, Old Shoreham, I recorded my first two sparring Gatekeeper Butterflies of 2007 on another breezy (Force 6) overcast day when butterflies were generally not flying. In the same area I spotted a Speckled Wood and a Small White and the first of of the occasional Large Whites. There was also two Common Darters(dragonfly) although the red one could have equally been a Ruddy Darter as it was not seen closely.
Full Butterfly Report

On a passage route through the Butterfly Copse near the Waterworks Road, I nearly trod on adult Slow Worm on the steps as I tried to photograph the small hoverfly Xanthogramma pedissequum. A Comma Butterfly basked on the wooden railing. Amongst the shrubbery at the back of the gardens and over the Stinging Nettles adjoining the path on the south side of Frampton's Field, there was a Red Admiral Butterfly and a pair of Holly Blues.
Adur Butterfly & Large Moth List

28 June 2007
Common Gromwell, Lithospermum officinale, was noticed on the Waterworks Road verges for the first time. 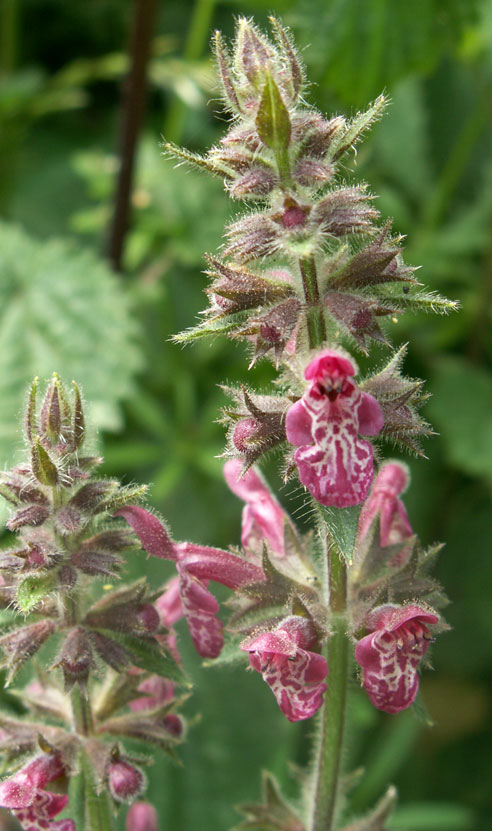 13 June 2007
A pristine Comma Butterfly and a similarly fine condition Speckled Wood Butterfly and Red Admiral were seen in the southern footpath section of the Waterworks Road, Old Shoreham.
The flower illustrated on the right was growing wild amongst the tall vegetation and Stinging Nettles on the western verge. It was a Hedge Woundwort, Stachys sylvatica. I had never seen one in flower before.

15 April 2007
Three Orange Tips fluttered along the verges of the Waterworks Road, but there was no Garlic Mustard seen in flower in its usual places. A Peacock Butterfly, a few Small Whites were also seen as well as a Speckled Wood in the Butterfly Copse.
Butterfly Report
The first hoverfly Myathropa florea of the year landed on me in the Butterfly Copse and the expected Rhingia campestris hoverflies visited Green Alkanet and White Deadnettle.
My first Common Carder Bee Bombus pascuorum of the year, with a furry orange thorax, was seen on the Waterworks Road.

5 April 2007
The Public Footpath 3138 section of the Waterworks Road south proved to be the best area of the day with a Peacock Butterfly seen immediately, and at least one Comma, one Small White and three Brimstone Butterflies all seen within three minutes.

A red/purple five petalled flower at the southern entrance to the Waterworks Road is a naturalised garden species of Shamrock, Oxalis.
Adur Wild Flowers

2 April 2007
In about five minutes on the Footpath 3138 section of the Waterworks Road, three small white butterflies flew by too rapidly to identify and they appeared to have a white fringe to their upper wings. Later more were seen and at least two were identified as Small Whites. In the same area four Brimstone Butterflies flew by, two Comma Butterflies were seen simultaneously on Nettles, and three Peacock Butterflies settled. Earlier a Small Tortoiseshell Butterfly was seen to fly over the Waterworks Road.
Adur Butterfly List 2007

Ownership and public access to this land is currently the subject to an enquiry. A Public Footpath 3138 comprises part of this land and another one Path 3140 crosses the land at the southern end.