30 December 2005
After recent frosty days the weather has warmed a little and we woke to the sound of rain on the windows, carried on a southerly wind.

It was unpleasant, a Strong Breeze (Force 6) gusting to Gale Force 8 from the SSE, and air temperature of 5.6 ºC approaching midday which converts to a wind chill of just below zero, and precipitation of 5.59 mm from about 5:00 am in the morning to midday which equates to a continuous heavy drizzle.
In the afternoon it warmed up and by 3:00 pm the rain total had reached 9.65 mm.
Shoreham Beach Weather History
Beaufort Scale

28 December 2005
The air temperature recorded on Shoreham Beach at minus 1.1 ºC at 6:59 am was the lowest of the winter so far. No further snow fell overnight.

25 December 2005
Christmas Day
Under a clear blue sky the air temperature reached 7.7 ºC at 2:09 pm. There was a Light Breeze from the NNW.
Beaufort Scale

17 December 2005
It feels cold with a wind chill of minus 2 C, a dew point of minus 5.2 ºC (ice in my fish tanks in the garden from dusk onwards) just before midnight, but an air temperature of 0.5 ºC from dusk to midnight.

11 December 2005
The Adur Valley by the Toll Bridge was misty about midnight. The air temperature fell to a low point of 1.3 ºC at 7:46 am. The dew point was below zero and there was thin ice on some ponds and puddles.

In the late afternoon a extraordinary band of white mist (a fret) crept over from the Shoreham Airport and New Monks Farm area which in the case of about fifteen minutes first of all obscured the view of the Toll Bridge from the south-east by the Railway Viaduct and then the view of Lancing College disappeared under the mist. The mean humidty for the day was 85%. The air temperature at the time was a high 9.1 ºC, but the mist droplets felt cold. The dominant wind direction for the day was from the south-east, but the mist appeared to roll in from the south-west.
Advection mist or fog occurs when a warm breeze blows over a cold surface (usually the sea). However, when the sea is warm the moist sea air can spread over the cold land and then Advection fog or mist occurs. Fog (by definition) occurs when visibility is under 180 metres (Peter Lafferty).  This was mist. The other type of mist or fog is radiation fog which also occurs when the land surface is colder than the air. (J.G. Harvey)

25 November 2005
It was a chilly day with a mean air temperature of 2.2 ºC, a high of only 4.4ºC but a low still above freezing of 0.8 ºC at 6:52 am. There was hardly anything more than a breeze to give an wind chill and make it feel really cold. Precipitation was zero.

24 November 2005
There was an ominous-looking black low cloud rolling in over the downs from the north and a flurry of light hail descended at 4:30 pm in Shoreham blown in almost horizontally in a north-westerly squall of 47 mph Force 9. Within about three minutes the squall had died down a Moderate Breeze (Force 4).

The atmospheric conditions beneath fluffy cirrus and a streaked sky produced a purple-red in the east beneath a large Full Moon and an orange sunset in the west.

Red sunrises and sunsets are due to dust particles in dry air. As weather systems over the UK move mostly from west to east, a red sunrise indicates dry weather moving away to the east, so rain should be expected soon. Conversely, a red sunset hints of dry weather to come from the west. (Script by the Met Office)

But is this ice? giving an indication of colder weather to come? 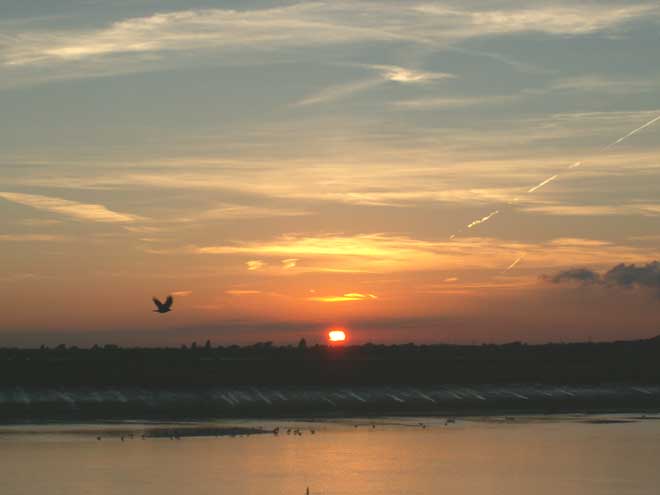 The sun setting over the Adur estuary and Shoreham Airport.

27 September 2005
The Fresh Breeze Force 4 (at 24 mph bordering on Force 5) from the south-west (224° azimuth) felt stronger and more from due south. Stars shone in the clear sky at night.
This wind may or may not have brought immigrant Red Admirals to Shoreham.
Adur Butterfly & Large Moth List 2005

30 August 2005
A clear blue sky without as much as a single white fluffy cirrus cloud and the day got warmer and by the late afternoon the shade air temperature was 26.3 ºC.

22 August 2005
Large equinoctial spring 6.6 metre tides coincided with the autumnal weather, in this case warm rain, the temperatures attaining 20 ºC with a 95% humidity, and throughout the day the temperature exceeded 18 ºC with a minimum 91% humidity.
Rain was steady in the early morning at 7.37 mm. These are exceptional conditions, as rarely is the high humidity combined with warm temperatures.
Previous High Humidity
Shoreham Weather Station History 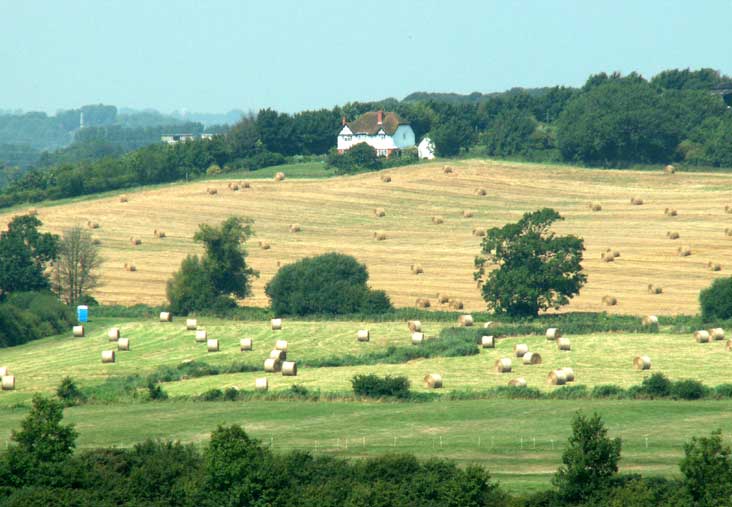 27 July 2005
It was a misty moisty morning (especially over the sea) and the heat was energy-sapping as well, rising from 16.2 ºC and 94% humidity at 8:00 am to 21 ºC and 85% humidity at 3:00 pm. These figures appeared to show exceptional conditions, as rarely is the high humidity combined with warm temperatures.
Shoreham Weather Station History

14 July 2005
The temperature reached 25.1 ºC but the humidity never fell below 59% which was exceptional for a warm sunny day.

Maximum temperature: 25.4 ºC at . The temperature was checked against my own thermometer in town and found to match exactly.

19 June 2005
White cirrus clouds and vapour trails crossed the azure blue sky as the air temperatures attained 27.7 ºC in a Gentle Breeze (Force 3) the warmest day of the year so far. Humidity fell to 50 %.
Butterfly List for the Day

1 April 2005
Mist turned to fog as visibility fell to under 200 metres (by definition) and in Shoreham town at midnight at the turn of the month the visibility was under 50 metres.
recorded the following just after midnight: 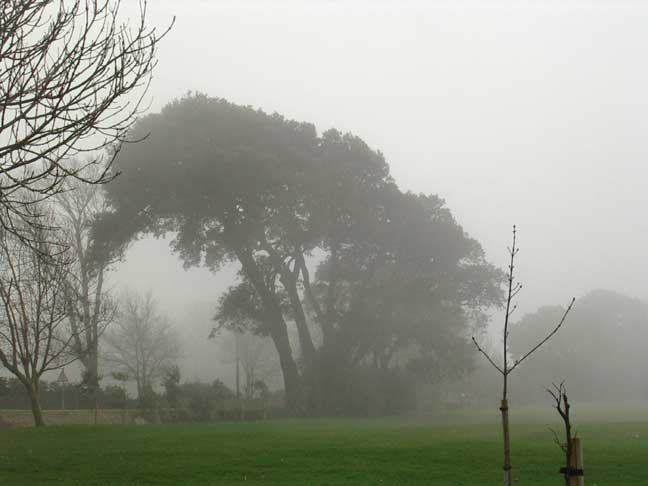 18-19 March 2005
As the night fell a dense mist came down and restricted visibility to 25 metres. the lowest air temperatures was 6.8 ºC at dawn but for most of the time it would have been higher than the sea temperature which is about 7 ºC at this time of the year.

4 March 2005
Looking from the Grinstead Lane bridge, Lancing, towards the north-east, a thin coating of snow has settled on Truleigh Hill on the far side of the Adur valley gap. The distant hills backing Brighton are all coated in white.

Report by Ray Hamblett on the Lancing Nature Notes Blogspot

3 March 2005
There was no sign of snow in Shoreham town but on looking out of my window, there was a thin layer of snow on the downs above Shoreham. This snow was only on the high ground north of the A27 By-pass, and the pastures from Slonk Hill westwards to Mill Hill were green. The ice in my garden pond was 3 mm thick with just a small amount of open water at the edges of the pond. The precipitation for today was recorded at nil, so the snow must have fallen yesterday, obscured by the rain in town. The air temperature is above zero throughout the day, but it was -0.1 ºC at dawn.

2 March 2005
I awoke to 6 cm (measured) of lying snow in Ring Road, North Lancing. The last few hours have seen much wintery precipitation, a mixture of hail, rain, and snow.

Report by Andy Brook (North Lancing) on the Adur Valley Smart Group
The snow was not repeated elsewhere. In Shoreham town and in Lancing there was horizontal sleet turning to rain, on to a warm waterlogged ground where the snow did not settle even briefly. The daily rain was in excess of 12 mm and the air temperature and dewpoint remained above zero on Shoreham Beach.

1 March 2005
The snow of yesterday had all melted, the breeze had changed to the south-west and it rained 5.08 mm.

27 February 2005
Snow!  Although it appeared more like horizontal sleet at first from the east, it actually begins to lay first on the pavements and roads and then on the grass. Although, only a thin layer, this is the first proper snow of the winter. The snow did not lay in Steyning and seems to have been confined to the flat urban area by the coast. 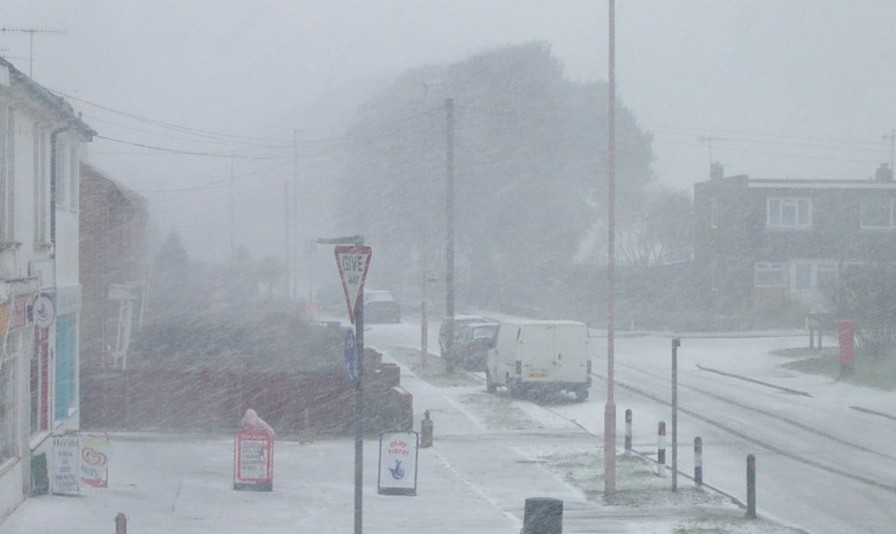 Snow at the bottom of Stoney Lane
Photograph by Pete Weaver

11:00 am
Air Temperature  2.3 ºC
Dew Point  -2.1 ºC
Wind Direction NNE
Wind Speed  Force 6 (Strong Breeze)
By midday the wind had reduced and it was more like snow than sleet. Unfortunately, a look at the downs from out of my window and no snow seems to have settled. By 1:00 pm, almost all the snow had melted.

27 February 2005
A slight sprinkling of snow occurred but in only the morning and did not lay. 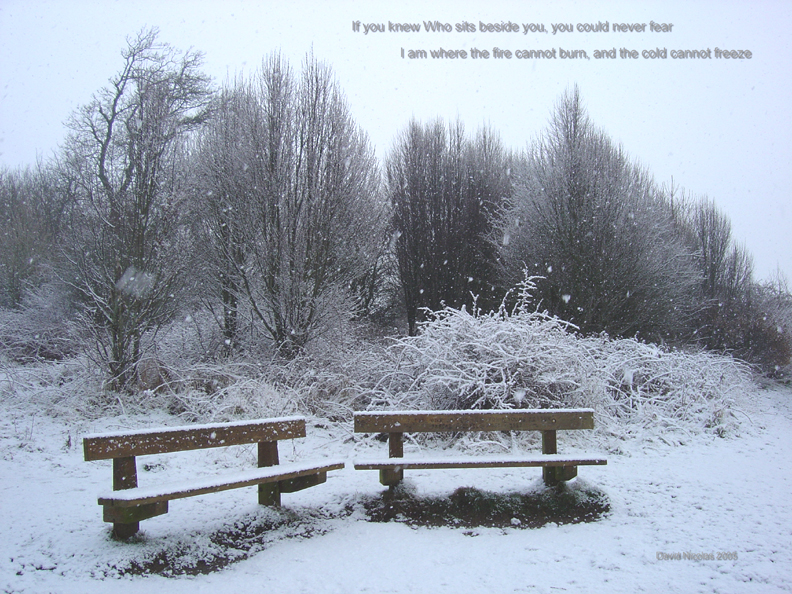 If you knew Who sits beside you, you could never fear
I am where the fire cannot burn, and the cold cannot freeze

25 February 2005
A thin layer of ice floated on the surface of my garden pond in Corbyn Crescent (TQ 224 055) for the first time ever as the air temperature fell below freezing for the first time this winter, recorded at -0.2 ºC just before 7:00 am.

23 February 2005
A small flurry of snow, scarcely enough to warrant the name, descended before dawn; it laid only in a thin layer on hard surfaces like pavements and roads, but not on the grassy bits in Shoreham town. By daybreak the snow had all melted and the air temperature did not fall below freezing, although the dew point fell to -3.1 ºC at 3:26 am and approaching midday it was still -2.2 ºC.

21 February 2005
A slight flurry of snow occurred in the afternoon, but there was not enough snow to settle. The temperature was well above freezing but dew point fell below zero. The precipitation was only recorded at 0.25 mm which is the reason the flurry did not lay.

2 February 2005
Just after midday, the first burst of sunshine of the year felt warm in a shade temperature of 9.7 ºC.

The full moon rose at 3:15 pm and could be seen large in the eastern sky before dusk. The weather vane was pointing north.
Shoreham Beach Weather History (New Millennium)

5 August 2003
It was the hottest day of the new millennium when the air temperature (unofficial, certainly too high) reached 30.6° C at 5:54 pm with a gentle breeze. Humidity fell to 39% so it was quite pleasant outside.

The difference between 40000 Lux and 5000 Lux is about 4 aperture stops on camera settings. There was still enough light to take a photograph, like an overcast day, like a prelude to a thunderstorm.
The times of the maximum coverage where confirmed by visual observation of the eclipse through the mylar spectacles.
On a clear day, the air temperature in the sun varied from 25° C to 18°C at the maximum amount of the eclipse. The lower temperature equalled the shade temperature.
Report by  Andy Horton