Link to the Shoreham Weather Reports for 2007

29 December 2008
The air temperature fell to minus 1.5 °C at 8:00 am and there was a thin layer of ice over my small duckweed-covered fish pond in my garden in Corbyn Crescent, Shoreham.

25 December 2008
Christmas Day was cold and clear, a change from the usual drizzle in previous years. 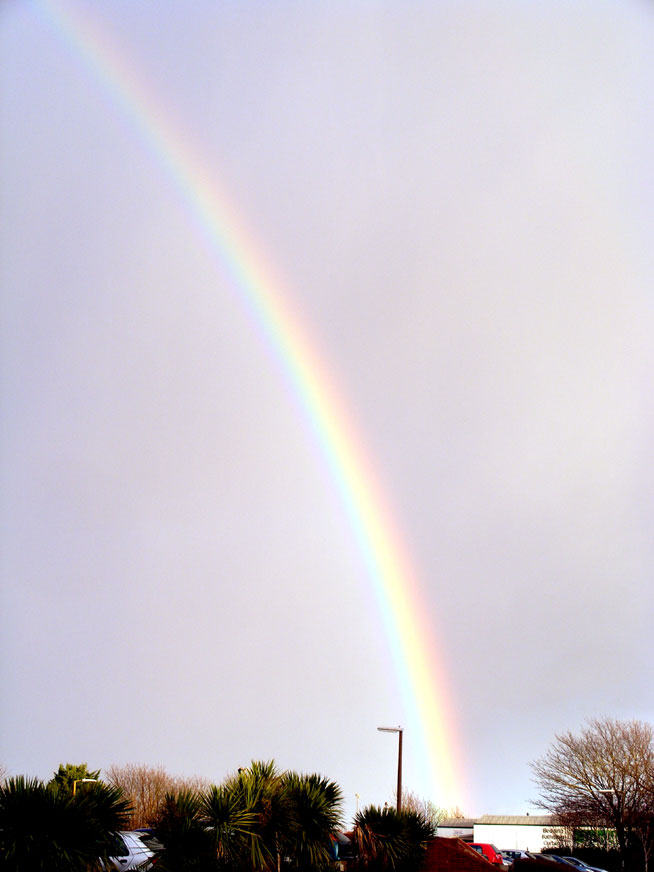 24 November 2008
A clear rainbow could be seen from Adur Civic Centre.

4 - 7 September 2008
There was more atrocious weather with heavy rain intermittently on all four days.

August 2008
The poor weather continued for the whole month to be the worst August in my lifetime of over fifty years.

14 August 2008
Rain showers and imminent rain for most of the day prevented any excursions.

13 August 2008
A persistant Strong Breeze at Force 6 for most of the day gusted regularly to Gale Force 9 blowing the large tree branches around throughout the daylight hours. The maximum gust was 52 mph.
Beaufort Scale

12 August 2008
A Strong Breeze at Force 6 for most of the day prevented any excursions. 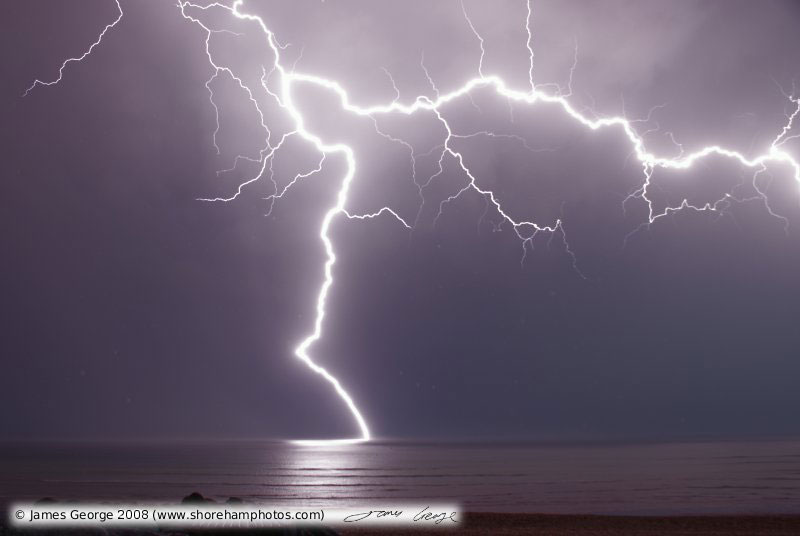 This photograph by James George (Jimbo) tells its own story

1 - 5 August 2008
It was too breezy and overcast to assess the Chalkhill Blues on Mill Hill.

6-10 July 2008
Four days of continual gales and heavy rainfall prevented any outside trips. On the fifth day the planned trip was interrupted by a heavy rain shower.

5 May 2008
On Bank Holiday Monday, it felt warm for the first time this year as the temperature reached 20.0 °C at midday. The wind was from the north at 13 mph (Force 4).
Met Office Shoreham Weather

Virtually all the snow has melted, although there was some ominous black clouds to the north, over the downs.

A surprise snowfall continued through the morning to a measured depth of 75 mm on the pavement outside my home in residential Shoreham. The Met Office recorded temperature plummeted from 4° C at 9:00 am to 0° C freezing point from 10:00 am to 2:00 pm, rising to 3° C by 6:00 pm. My quick temperature reading was 5.5° C at 10:00 am.
As the temperature rose during the day most of snow in town melted leaving a patchy and thin layer on the downs, all the snow fell from the trees, although on the downs there was a remnant of snow on north facing trunks in the afternoon.
North Lancing Snow Gallery 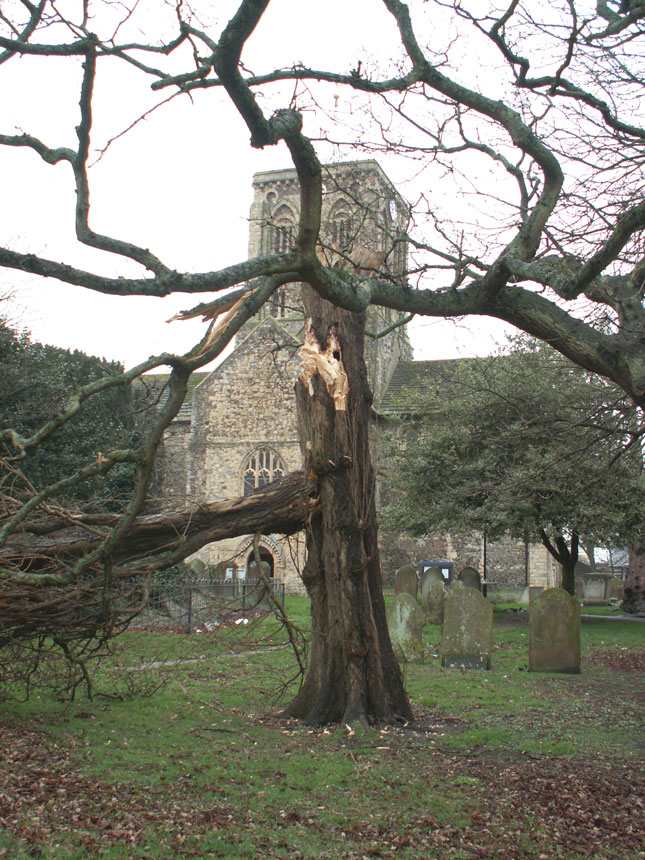 10 March 2008
It is blowing a gale for most of the day. At 8:00 am the southerly was blowing steadily at Gale Force 8 gusting to 64 mph, Storm Force 11. At 2:00 pm the SSW was recorded at Gale Force 8 gusting to Storm Force 10. There was mid-morning lull when the wind speed fell to Force 5 at 10:00 am. The barometer read 972 hPa at 9:00 pm.
One tree had broken its trunk and left as a stump in St.Mary de Haura churchyard in central Shoreham. All the trees in Buckingham Park, Shoreham, remained intact.
Met Office Shoreham Weather

18 February 2008
The temperature at 7:00 am was recorded at minus 3° C which would be the lowest this millennium at Shoreham.
Met Office Shoreham Weather

5 February 2008
There was the continual rain throughout the day, with very brief interludes. There is no rainfall data at present for Shoreham. 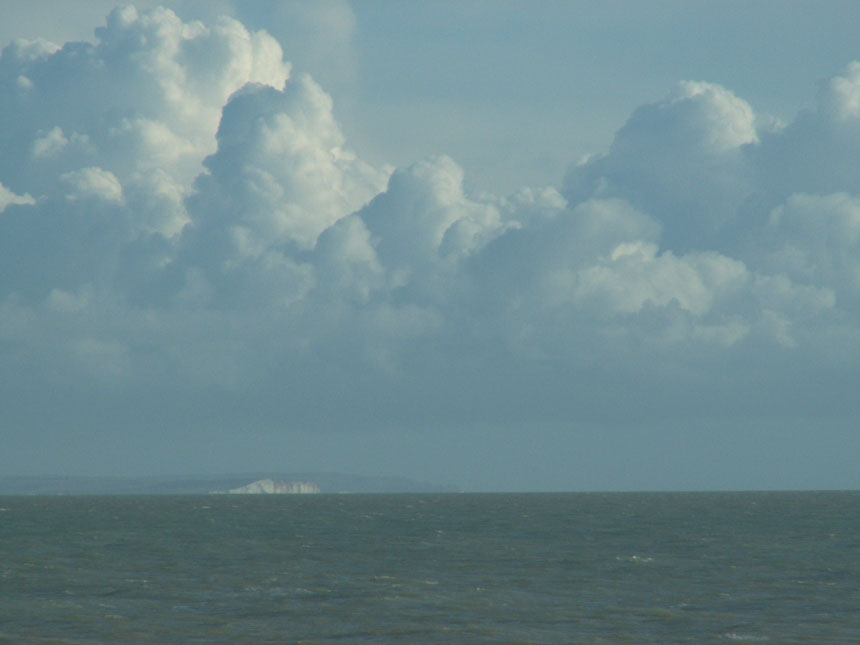 With Cumulus clouds like this, I expected rain. This may be Cumulus castellanus suggesting it would transform into a rain producing cloud.

3 February 2008
In the early afternoon I cycled into the strongest east wind I have ever encountered and I estimated a Force 7. The Met Office Shoreham Weather recorded a SSE 37 mph (Force 7).

31 January 2008
In the early afternoon the winds were recorded at Shoreham at a steady 40 mph (Gale Force 8) gusting to 55 mph and 60 mph (Storm Force 10). No damage was seen in Shoreham town.
Met Office Shoreham Weather
Beaufort Scale