The sea was flat as a pancake, and bright blue as the sky was clear and sun breached the fluffy clouds. The spring tide at Worthing recedes to its maximum around dawn and dusk. A 5.8 metre* (measured at Shoreham Harbour) falling to 0.0 metres low was just sufficient to uncover the rock and sand terrain beneath the amusement pier. At first glance, the shore appears exclusively sandy and in all respects one of the  least promising of rockpooling shores. Firm sand leads the explorer out to below mid-tide region where the sand gives away to a mixed ground with rocks buried in the sand, a few looser rocks (cobble-sized), and shallow sandy pools. There are straggly strands of the green seaweed Enteromorpha on this shore, and a few red seaweeds try to gain a holdfast, but are generally sparse and unsuccessful colonisers.

Under the steel girders of the pier is the best area, with the supports providing attachment points of a sizeable mussel community. Mussels are a rich source of food for many animals, and the community including barnacles, provides incidental nutrition and shelter for other communities. However, because of building work on the pier supports, most of the mussels have been scraped off during 1999. There are still thousands with accompanying Dogwhelks. Grey Topshells are common on this shore.

26 October 2000
A juvenile Tompot Blenny, Parablennius gattorugine, collected from the shore at Worthing is unusual, although I have seen one before this late in the year when the shore fauna is scanty.  AH.

10 March 2001
Very poor shore fauna in the fading light, after about 6 months of rain most days. Anemones are scarce with just a few Plumose Anemones, an occasional Snakelocks Anemone, and no Sagartia troglodytes to be seen easily. Unusually for this shore, Beadlet Anemones were the commonest. Adult Blennies were discovered at the low tide mark. Some of these had been fighting and showed the head injuries of the male fish after they get into fights.

11 June 2001
Offshore from Brooklands Boating Lake, (1 mile east of Worthing Pier) Common Terns, with their distinctive forked tails, swept low over the sea that was showing the first signs of white horses, and descended to take a feed from just below the surface in one swift swoop. Black-headed Gulls, in breeding livery with a completely dark (brown) head, were attempting the same manoeuvre without the same elegance. A half dozen Cormorants congregated around the post marking the outlet pipe, occasionally diving under. This is a regular flocking area for these fish eating birds with frequently up to 29 birds that can be quickly counted.

The Ringed Plover reveals itself by its swift running over the shingle. Without moving it is too well camouflaged and difficult to spot. The summer residents birds and much plumper than the lean winter visitors. As the tide ebbs and the water recedes, more (a half dozen in 50 metres of sand) of these small birds appear on the emerging sand flats.

Under the sea, Paul Parsons returned from a brief foray with a handful of very small Actinothoe sea anemones, a small (sacoglassan sea slug) sea hare Elysia viridis, and some other very small orange anemones with whitish orange tentacles. After close study I think these are the often overlooked Diadumene cincta. The mouth is orange in some specimens, but the most useful diagnostic difference from the similar Plumose Anemones is their instant jerky reaction when touched. 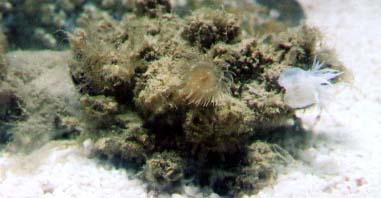 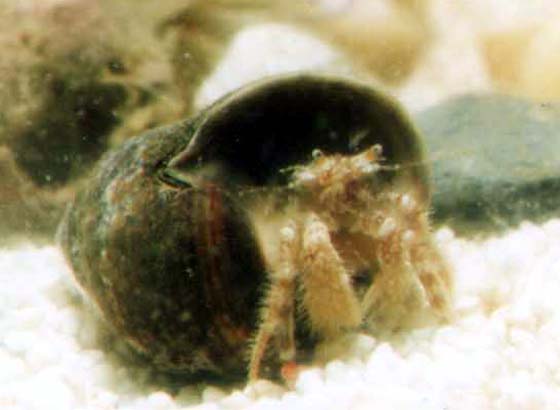 I recorded my first specimen of the Hairy Hermit Crab, Pagurus cuanensis, intertidally at Worthing Pier.

It looked very strange at first, like a small Long-legged Spider Crab, Macropodia rostrata, living in a Dogwhelk, Nucella, shell.

The low spring tides at Worthing was nothing special. The Maja Spider Crab had a missing leg. Bait colllectors test if they are soft or not by pulling off their legs, although with this one it may have had an accident.

The juvenile Herring Gulls, Larus argentatus, paddled in the pools, their legs trying to induce worms to the surface. The adults were a bit lazier, possibly hunting for the Squat Lobsters, Galathea squamifera, which were common, small ones, under rocks.

The tide went out a long way past the foot of the pier, but the light faded fast and it was hard to see anything. Fish were represented by young BullheadsTaurulus bubalis, 5-Bearded Rockling adults Ciliata mustela, a few first year juvenile Common Blennies Lipophrys pholis, and a few Sand Gobies Pomatoschistus minutus, and a solitary young Tompot Blenny, Parablennius gattorugine.

There were no sea anemones noticeably in the murky light, no draping Plumose from the pier supports, or Sagartia troglodytes between the stones (most of the sand had been scoured away) and no Snakelocks Anemones seen in the pools. Beadlet Anemones were common under boulders.