Although informal, this "rockpooling" expedition will go down as the second official field trip organised by the British Marine Life Study Society.

East of Brighton Marina, the chalk cliffs stretch unbroken for about seven miles, until they reach the mouth of the River Ouse as it reaches the sea at the ferry port of Newhaven. A promenade at the foot of the cliffs runs from the eastern end of Madeira Drive in Brighton to Saltdean, which is about half way along.


Madeira Drive is the straight coastal racing track, that runs west from the from the Palace Pier and the Aquarium (Brighton Sea Life Centre), with the Volk's Railway running parallel with it to its terminus at Black Rock, which was the best rockpooling area, but has now been built over in concrete. Pools can be reached from the Madeira Drive end, but it involves a walk of nearly a mile past the marina.

A further railway ran along the flat bedrock shore for a short time during the last century. Concrete supports (called Daddy-long-legs) of the ill fated Brighton and Rottingdean Seashore Electric Railway (1896-1901) remain as evidence of the folly of the original idea. The track was, of course, washed away by the winter storms. 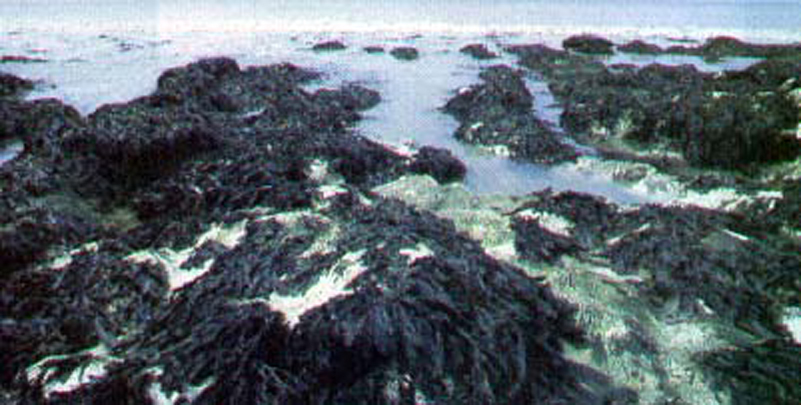 Serrated Wrack draped over the Chalk Boulders at Brighton, east of the Marina

Waves still batter at the chalk cliffs, and hurl pebbles over the promenade, so that the route is impassable when the worst weather coincides with high tides. At these times, it is also dangerous. Several people that been dragged out to sea and drowned.

For rockpoolers familiar with the aesthetic rocky shores of the west coast of England and Wales, the view from the top of cliffs may not look promising. It is only when you venture down below the shingle line, is the richness and diversity of life revealed. Erosion and the effect of the frosts has resulted in rocks being strewn over the flattish chalk rock beach. Fresh water freezes and expands, causing the chalk to crack open and break apart. 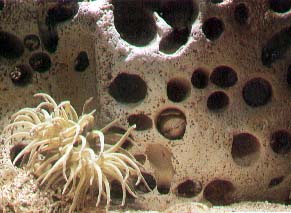 Piddocks in Chalk Rocks from Brighton Beach
The Snakelocks Anemone, Anemonia viridis, is at the edge of its distribution range at Brighton and occurrences on the shore are extremely rare (one discovered in 100 visits).

The Piddock, Pholas dactylus, is a bivalve mollusc that drills right into the chalk rock, where it spends its life. Chalk boulders and smaller rocks on the beach are warrened with piddock burrows, the living animal having departed, providing hiding places for small fish, crabs, and sea anemones.

Low spring tides, when the tide goes out the furthest occur at approximately the same time of the day in every year in different parts of the country. The tidal variation of the lowest tides (measured at Shoreham-by-Sea) is a height of 6.6  metres. High tide occurs just before midday on the springs, and low tide about 6 hours 12 minutes later, will occur in the early evening; or the early morning if you are a dawn riser.

We chose the evening low tide to arrive late in the afternoon, to follow the receding tide. Access to the shore is possible at both Ovingdean (just east of Roedean, by St.Dunstan's) by walking through a tunnel under the coast road, or at Rottingdean.

From the well pubbed and attractive village of Rottingdean, a concrete slope led us down to the promenade. The rocky shore immediately in front of you is still covered by the sea, but to either side, the tide is ebbing rapidly to reveal rocks and weed for miles in either direction.
Old clothes are obligatory. Plimsolls are sometimes better than gum boots, because of the better grip they afford on slippery rocks.

Temperature in the surface waters of the English Channel is recorded at 170C off Sussex, but measured inshore the temperature often reaches 190C in July and August. In the tidal pools on the upper shore, the rays of the sun may heat the small amounts of water up to 240C and above. The sea is more turbid that the clear oceanic waters off Cornwall. This is partly because chalk is a soft rock, and it crumbles easily. Plankton is different too; the coastal type - there are several indicator species. Fauna is consequently not so varied, but because of the warmer water, more species will be found than on the eastern North Sea coasts.

It is difficult to decide which section of the beach is the best to explore. One characteristic of this type of shore is the predominance of slippery weeds; in this case, principally the Serrated Wrack, Fucus serratus, draped over the edge of chalk boulders, but appearing from the promenade as a continuous mat covering hundreds of metres. The small Flat Winkle, Littorina littoralis, lives amongst the fronds. It is found in a variety of colours, including yellow, green, and red.

Zoning demarcation on this flat shore is not clearly defined. Spiral Wrack, Fucus spiralis, occurs on the topshore, the seaweed growing where the promenade wall adjoins the high tide mark. Otherwise, most of the visible shore is mid-tide level fauna. 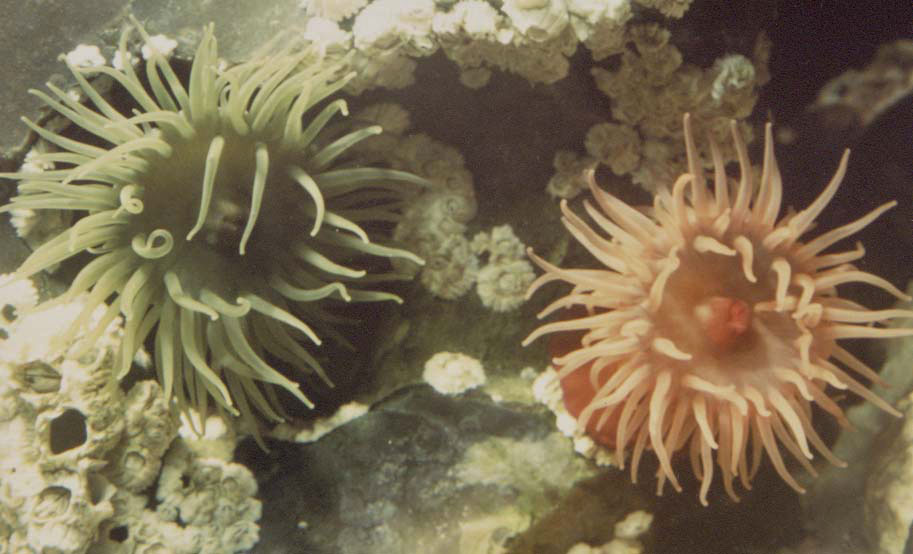 It is only on low springs that the lower shore animals and algae are revealed. For this reason, it is best to choose the part of the shore where the tide has receded the most. Concrete groynes lead down to the sea. It is possible to follow them down, walking along available ledges; at the same observing the few animals that can live in these exposed conditions, notably the Limpet, Patella vulgata, clamped tightly to rocks and concrete. Also two species of Acorn Barnacles, mostly Balanus balanoides, which can raze a nasty graze to the careless. In crannies, the first Beadlet Anemones, Actinia equina, can be spotted, appearing as jelly-like blobs in red and green. In sheltered locations, Periwinkles, Littorea littoralis, congregate. This edible mollusc is collected and numbers have been reduced appreciably.

Hoary Stock looks a little like a wallflower growing on the chalk cliffs and beside roads, where it could easily be mistaken for a garden escape. The flowers, which are generally purple, are sweet scented and appear from May to August. It is only found in Britain on the Isle of Wight and on the chalk cliffs and adjacent grasslands at Brighton, East Sussex.

The Piddock, Pholas dactylus, is a bivalve mollusc that drills right into the submerged chalk rock, where it spends its life. Chalk boulders and smaller rocks on the beach are warrened with piddock burrows, the living animal having departed, providing hiding places for small fish, crabs, and sea anemones. 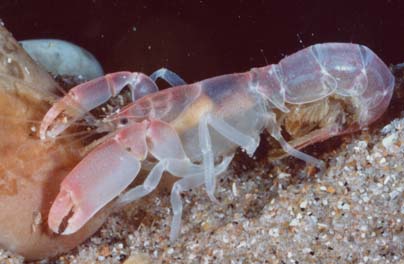 The burrowing prawn known as Axius stirhynchus, lives in burrows offshore. The numbers of this crustacean, which is uncommon in British seas, are unknown. 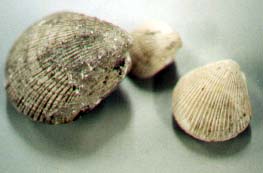 This superficially cockle-like bivalve is occasionally found in fossil form on the chalk wave-cut platform.

On the pebbles, the fossil heart urchin Echinocorys scutatus (pic) has been found.

4 August 2000
Ovingdean Chalk wave-cut Platform (TQ 361 024)
After the heavy rains, the intertidal chalk platform was predictably very poor in numbers and variety of macrofauna. The whole of the flat beach was covered in silt, probably because of the rain, but possibly also because of the wave action. In fact, the beach was so poor that even if you live nearby, it can hardly be recommended for a visit. I had not been to this beach for over a year, and I was curious to see if it had changed. If anything, the coverage of the Serrated Wrack, Fucus serratus, had increased, which actually makes the passage to the low spring tide areas more difficult. One pleasing find  was a Short-legged Spider Crab, Eurynome aspera, with this crab being frequently found below low water mark off this part of Sussex. Otherwise the only thing that could be noted were more crabs and other decapod crustaceans under the wrack-draped rocks. Velvet Swimming Crabs,  Necora puber, and the Hairy Crab  Pilumnus hirtellus, were frequently discovered under rocks. The smaller porcelain crabs, the Long-clawed Porcelain Crab Pisidia longicornis was common, and the Hairy Porcelain Crab Porcellana platycheles, was frequently discovered. Squat Lobsters, Galathea squamifera, were small (to 25 mm) and only occasionally found.
The Japweed, Sargassum muticum, was noticeably more prevalent than before. Clumps were common between the tides, when on all previous occasions (100+) this weed had only been occasionally discovered. This seaweed is easily spotted.
Andy Horton.
Crabs Page
NEW ACFOR SYSTEM OF ABUNDANCE OVER A SPECIFIED AREA (OF SHORE)