Jane Lilley reports from a dive off Sussex


The 1944 invasion of France included the use of floating Mulberry harbour units. These were stored in preparation for D-Day by sinking them in shallow water off the south coast. Most were re-floated and towed across the English Channel, but several were damaged and abandoned, and remain as wrecks; one, not far from Bognor, West Sussex, is known as the Outer Mulberry and is a well-known dive site noted for huge numbers of fish. I dived it for the first time in August 1995. 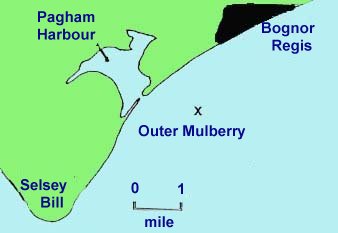 Fish were certainly very much in evidence. Close to one side was the largest shoal of Bib (also called Pouting), Trisopterus luscus, that I have ever seen. It was at least 4 metres wide by 2 metres long and 1 metre deep; counting the number of fish in a small area and extrapolating gave a conservative estimate of 1200 fish! They were between 13 cm and 26 cm long, and appeared to be either 'swimming on the spot' or heading into a very slight current. The result was that the whole shoal hovered in the same place above the seabed. 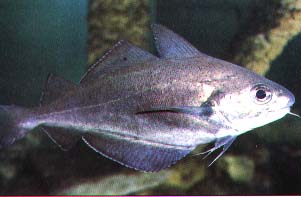 Bib belong to the cod family. They are usually easy to recognise by their vertical dark and light stripes. Here, some individuals were very clearly marked. In others the pale stripes were less distinct, and some fish were an almost uniform coppery colour with the pale stripes faintly visible on the back1. Their close relative the Poor Cod, Trisopterus minutus, is a similar-looking fish without the stripes, but it is less deep-bodied with no trace of stripes or, apparently, of the paler band near the rear edge to the second dorsal fin and tail which seems to be characteristic of Bib.

The top layer of the shoal was made up of a different species. The three dorsal fins showed that these fish were members of the cod family Gadidae, but they  were larger than the Bib, and had greenish backs when the light caught them, with a sharply kinked lateral line and without the barbel on the chin. These fish were Pollack, Pollachius pollachius. There were about 200 of them, about 30 cm long, so they must have been relatively young; adults are commonly 50 cm long and may reach a metre in length. The larger fish are commonly seen swimming close to wrecks or rock outcrops, either singly or a few together. They feed on smaller fish.


At intervals beyond the shoal there passed Grey Mullet, probably Chelon labrosus; these were about 60 cm long, and up to five were in sight at once. They had two smallish, widely separated dorsal fins. Clear narrow stripes of lighter and darker grey ran along their bodies, distinguishing them from Bass, Dicentrarchus labrax, which are uniformly silver but otherwise appear similar when seen at a distance by divers.

Elsewhere around the Mulberry I watched Bib feeding. One little shoal of small individuals were 'pecking' at the seabed, head-down with their bodies at an angle of 45 degrees. Others appeared to be feeling (tasting?) the sediment with the long slender chin barbel and the tips of the pelvic fins. The latter are bifurcated, divided into two long narrow rays which are usually held together when swimming but which the fish separates when it settles to the bottom, forming a double probe. Both these and the barbel are dead white, a colour which seems to be characteristic of sensitive barbels in bottom-feeding fish; those of Red Mullet and Pogge show the same colour.
Wrasse

Ballan, Corkwing and Goldsinny Wrasse were all common. The Ballan Wrasse, Labrus bergylta, were smallish, between 3 cm and 20 cm long, and showed an interesting range of colours. Among the more usual variations on greenish, brown, and reddish were one or two of a uniform pale beige. One fish had a narrow, slightly irregular white line horizontally along both flanks; another had fairly regular large dark blotches in two rows on each pale flank, the blotches roughly matching on the two sides of the fish. Swimming slowly and unhurriedly, they may not use the tail at all, but flap the wide-splayed pectoral fins2 steadily to and fro.

Tompot Blennies, Parablennius gattorugine, are usually found on wrecks and certainly liked this one. They were very common, often not in holes but upside down on the underside of surfaces, in full view if you could get at the right angle to look there. Several were about 25 cm long, which is quite large for a Tompot. Colour varied considerably, with the darker splodges ranging from very red to a darkish brown.

Just above the seabed beside the wreck were several shoals of Two-Spot Gobies, Gobiusculus flavescens; and Dragonets of all sizes from 3 cm to 20 cm long rested on the bottom or burrowed3 into it. 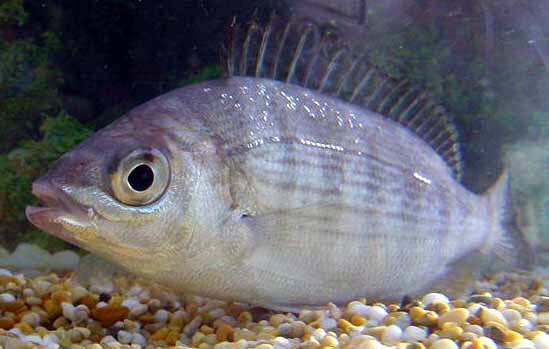 Black Sea Bream, Spondyliosoma cantharus, are much less well-known, though they are fairly common in Sussex waters at times. These were only about 5 cm long, and so probably hatched this year. They seem to forage over the seabed in very loose shoals, perhaps keeping just within sight of each other. You only see a single fish at first, but after a few moments, especially if it takes an interest in you, another will appear, and then more; in this case there were at least five. They are very deep-bodied fish, particularly juveniles, with a single long dorsal fin (usually partly folded down), and silver-coloured with a more or less distinct dark edge to the tail fin; youngsters often have some horizontal striping along their flanks. Confusingly, the more rarely seen adults may have darker vertical stripes.

Interesting invertebrates on the wreck itself included large numbers of a colonial sea-squirt, probably Aplidium punctum. Each colony is translucent pinkish or orange, with a thick stem topped by a fuzzy-looking head. They never grow large, but these were tiny, with the head less than 6 mm across, and were probably this year's youngsters. Many had attached themselves to red algae - surely a mistake, since I think the algae die back during the winter.

Both Dead Men's Fingers and Plumose Anemones were very common on some surfaces, either where the strong currents funnel through when the tide is running, or where they had some protection from careless divers.

The Dead Men's Fingers, Alcyonium digitatum, were almost all white, with 1% or 2% orange and a few cream-coloured. Very few were active; most had the polyps withdrawn, and had probably been inactive for some time, to judge by the evenly reddish-stained tips where algae had brushed against them.  Many were also unusually slender, which suggests prolonged inactivity since they are said to shrink while dormant. A few were emerging from this state, the outer skin splitting and flaking away, apparently pushed off by the polyps emerging underneath it.

Large Plumose Anemones, Metridium senile, covered some protected surfaces4. Their colour can vary considerably, but here almost all were white, with a few orange individuals. Most stood tall with the tentacles expanded, but a few had released the water normally held within the column to give it rigidity and had collapsed into low rounded blobs, quite unrecognisable unless you know what they are.

I saw two that had become detached (deliberately, or dislodged by divers? The Outer Mulberry is a favourite site for novice divers, who are often very clumsy). One had reattached itself by one side of its pedal disc to a piece of algae; it was much too heavy, and now hung upside down from the frond. The other was completely detached and drifting around in the water; to my surprise it had retracted into a ring with a hole clear through its centre. The upper side looked like a normal retracted Metridium, the withdrawn tentacles visible as opaque irregular bumps on the inner surface. The underside, clearly the retracted pedal (basal) disc, showed inner and outer circles with thickened, lumpy radial ridges between them around the central hole.

One vertical plate had a patch of little translucent-white polyps with minute tentacles similar to those of Dead Men's Fingers but without the solid body connecting them. They were a relation, the zoanthid Epizoanthus couchii, which is found around much of the west and south coast. The polyps are linked by a meshwork of stolons which creep over the surface they are attached to.

1Some fish can vary the intensity of their markings, which become clearer when they are excited, or alarmed. This could explain the faintly-marked Bib in the relaxed shoal.

2The pectoral fins are usually used for manoeuvring.

3When the Dragonets darted away they settled on the bottom and quickly shuffled sediment sideways so that they sank into it until they were partially concealed.

4In a dive on the site this year, 1996, one section of plating originally covered in the Plumose Anemone, Metridium senile, according to a 1981 survey, was found to have been replaced by colonies of Dead Men's Fingers, Alcyonium digitatum, with only a couple of sea anemones remaining.

Colonial ascidians are difficult to identify with certainty in the field. The family Polyclinidae contains 10 species, of which 5 are common, including Aplidium punctum, mentioned in the text.

The Black Sea Bream is rather variable in appearance, though the deep body with long dorsal and anal fins is characteristic, some individuals are much deeper-bodied than others. Young fish have silvery flanks with many pale broken lines along them and a wide dark band on the tail; adults may be silvery or dark blue-grey, almost black in mating males, and may have alternating dark and silver vertical stripes on their sides. Adults are usually 35 - 40 cm long, occasionally more. They are omnivorous, feeding on small fish and crustaceans, small encrusting animals and algae, and are usually seen and caught around rocky areas and  wrecks.

They breed regularly at the eastern end of the English Channel; this is probably their northern limit for breeding, although they are found as summer migrants around much of Britain. The male excavates a depression in a sandy seabed, and the female lays her eggs into it. The eggs stick to the base of the nest, where they are fertilised and guarded fiercely by the male until they hatch. The young fish remain in the area of the nest for several weeks before dispersing.

Black Bream are popular with anglers, but not usually abundant enough to be fished commercially. They are also known as Old Wife.

I have seen plenty of small Black Sea Bream when diving out of both Littlehampton and Bognor in Sussex with sizes varying from 3 - 4 cm long up to 13 cm, but never larger. Smaller ones, up to about 10 cm, were always in loose shoals with up to 7 individuals seen at one time, but may have been part of a larger shoal. They were usually to be found over a mixed cobble, pebble and gravel seabed.
Jane Lilley.

Black Bream have returned to the seas around Mevagissey in south Cornwall this year, with four specimens caught by an angler off the Lighthouse Quay at Mevagissey and displayed in the Aquarium (05.01.06) on the quay in the harbour.

When swimming the fish is usually a silvery colour, but when resting at night or when caught on a hook, the fish displays black vertical barring. However, specimens seen at Anglesey Sea Zoo caught in the seas around north Wales were black.
Andy Horton