Unsegmented worm-like animals with one opening to injest food. Usually they are microscopic animals that live in numerous environments including the sea. Many species are parasitic and these are sometimes known as flukes. 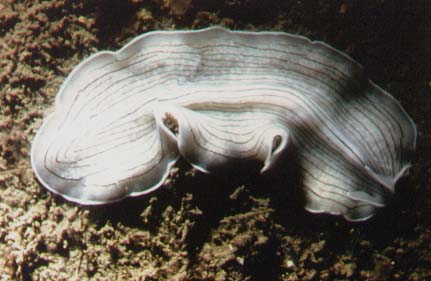 Gliding over the rocks and seaweed in the shallow sea, the Candy-striped Flatworm, Prostheceraeus vittatus,
is occasionally seen by divers, and only very rarely reported by rockpoolers under rocks on the lower shore.
The Candy-striped Flatworm is an active predator. It only grows to 50 mm long, but this is large for a
planarian or flatworm, because most of them are parasitic on a variety of other animals including molluscs,
crustaceans and fish in the sea. It belongs to the class Turbellaria of planarians that are free-swimming for the
whole of their life.