Macroalgae and phytoplankton from around the British Isles

Guest slide constructed for my presentation "The Seashore Rockpooler" 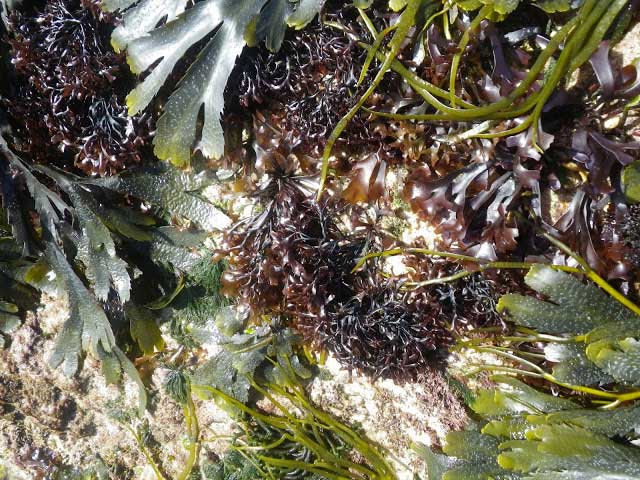 Red seaweeds (Rhodophyta) are the most diverse and species rich group of seaweeds.

Red seaweeds come in all shades from orangey red to pink and can change colour when bleached in the sun or submerged underwater.
Growth forms vary between multi-branched fronds that arise from a stipe, to laminar transparent sheet like forms, to hard encrustations. Even a single species can exhibit a range of morphologies. For example Chondrus crispus can have a flat dichotomously notched frond (not unlike a mooses antler) or, a thin narrow dichotomously branched frond.

There are over 350 species of red seaweed around the UK, many of which require specialized skills in taxonomy to identify.
Seaweed Glossary

Chondrus crispus and Mastocarpus stellatus
Photograph by Tabitha Pearman: Salty Scavenger (Rockpooling)
with a photographic guide to some common seaweeds. 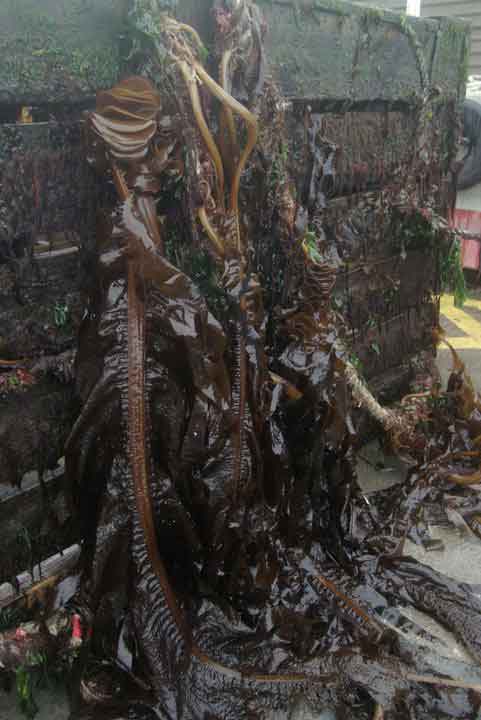 The alien seaweed Japanese Kelp, or Wakame, Undaria pinnatifida, was discovered by Dr Bob Fletcher (University of Portsmouth) on pontoons in Southampton water in the summer of 1996. This Japanese seaweed was first found at Sète on the Mediterranean coast and then later on the French side of the English Channel until 1996 when it was discovered at various places on the English side.

The seaweeds are fertile and there is no reason why it will fail to establish itself as an addition to the British marine fauna. The alga is one of the brown kelps similar to the Dabberlocks, Alaria esculenta. (Report in the Vernal/Summer 1997 Glaucus).


Late September 2010
The alien (Mediterranean) red seaweed Feldmannophycus ocmuriae was discovered at Pen-y-Holt, south Pembrokeshire. We have found it at West Angle Bay and at South Hook Point. 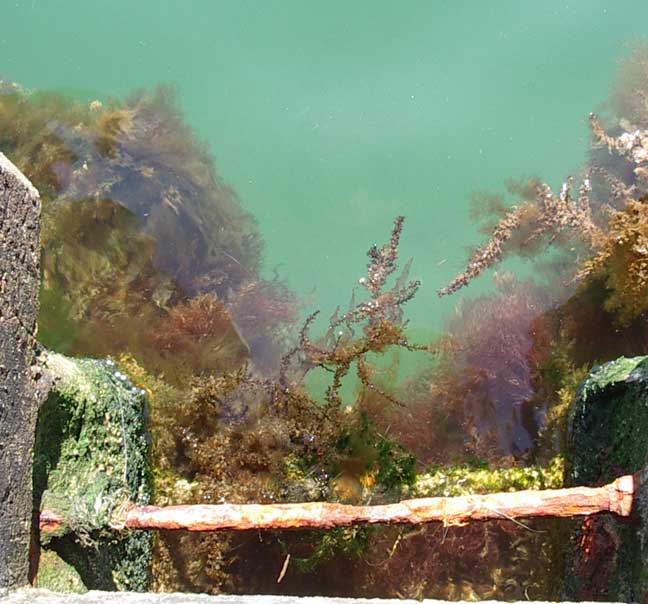 The alien Japweed, Sargassum muticum, is found all along the English Channel, and has been around since the 1960s.

Phaeocystis is a minute organism which can reproduce in enormous numbers, and is an example of the phytoplankton. Phaeocystis 'blooms' are called by names like Slurry Water and Baccy Juice, and are an annual occurrence off the Sussex and Kent coasts in May and June. Blooms are also found of other coasts including the coast of Cornwall. The Sussex species is Phaeocystis pouchetti.

During the day the phytoplankton photosynthesise and reproduce, the phenomenon called 'blooming'. The greatest 'blooming' occurs in the brightest sunlight is associated with hot weather and higher sea temperatures.

Photosynthesis of the phytoplankton produces oxygen, which can supersaturate the surface waters of the sea, However, at the later stages of the phytoplankton blooms the nutrients they need are exhausted and the algae die and sink to the bottom where they decay, a process which uses up oxygen and creates hypoxic conditions (a deficiency of dissolved oxygen). There are many records of plankton blooms causing mass mortalities of benthic fauna.
e.g. Mass Mortality of the Heart Urchin.

Phaeocystis is a prymnesiophyte flagellate that reproduces by fission at a phenomenal rate and forms large colonies about 1 mm in diameter. It exudes the sulphur compound Dimethyl sulphide (DMS ) which raises local levels in the atmosphere.

The seaweed Cladophora rupestris is a widespread algae invariably growing on the brown wrack Serratus fucatus where is grazed by the Flat Periwinkle, Littorina mariae. 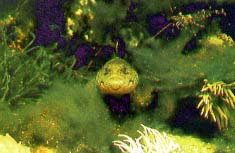 A Rock Goby, Gobius paganellus, in aquaria, poking its head out of a rock strewn with the filamentous algae Cladophora which spreads by its rhizoidal base.

Red Tide: in Killary fjord, southern Ireland, the plankton bloom in the late summer affects the local mussel harvest but causes no damage to the salmon farm. Peter Biddulph. 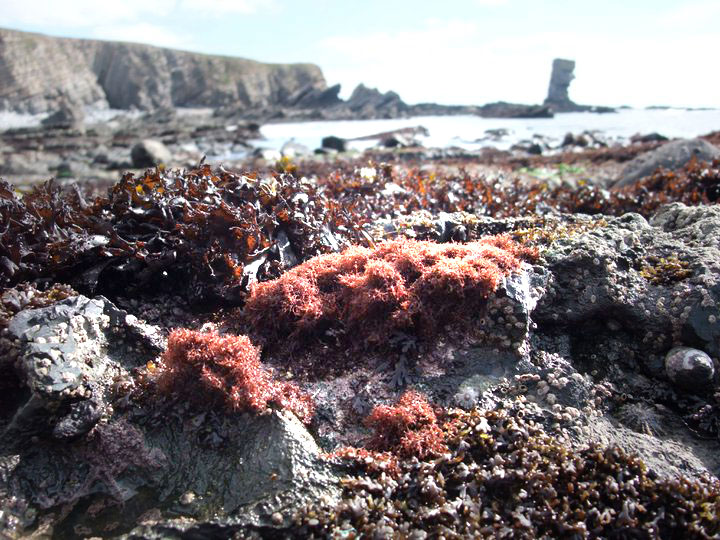 Non-native red seaweed Feldmannophycus ocmuriae at Pen-y-Holt, south Pembrokeshire. We have found it at West Angle Bay and at South Hook Point.

The seaweed was identified at West Angle Bay during the CCW intertidal survey by Francis Bunker. Professor Christine Maggs later confirmed the id. This is what Christine said about it in an e mail to Francis:

Caulacanthus ustulatus is a common rocky shore species in Southern Europe and the Mediterranean Sea. Several species of the genus Caulacanthus have been described around the world, including a Mediterranean species, Caulacanthus rayssiae. After the discovery of cystocarpic individuals, this species was later proposed as the type of a new genus, Feldmannophycus. Our study shows clearly that the Asian strain of Caulacanthus ustulatus (=Caulacanthus okamurae) introduced into Brittany and southern England is conspecific with Feldmannophycus rayssiae, and is present in many Western European shores, sometimes alongside native C. ustulatus, including in its type locality. Present results show also that other species present in the Indo-Pacific region belong to either genus.
We think the correct name of the British material is Feldmannophycus okamurae"

12 - 14 August 2009
Thousands of fish have died of suffocation in the seas of St. Austell Bay in south Cornwall.
"The more we looked, the more dead fish we found, mainly small ones, but eventually even about half a dozen Cuckoo Wrasse, Labrus bimaculatus, - a beautiful red and blue fish, and some others which someone identified as baby Dogfish, Scyliorhinus canicula, all unmarked but dead in rock pools or on the shoreline. One chap even hauled out a large Conger Eel, Conger conger, from a pool, obviously dead."
The dead fish coincided with a large bloom of plankton that had been blown into the bay. The bloom had turned the water brown and left sludge deposit on the shore. The exact species has been identified as the dinoflagellate, Karenia mikimotoi.
Western Morning News Report
Wild About Britain Forum (Report)
BBC News Report (1)
BBC News Report (2)

18 March 2011
Plymouth Marine Laboratory scientists have detected two large algal blooms; one off the coast of Ireland and the other closer to home covering an area from the Lizard, in Cornwall, to Salcombe, in Devon.
When such blooms occur scientists from a range of disciplines are brought together to identify the plankton responsible and establish whether there is any threat to people or other marine life.
In this case the bloom, which is likely to discolour the sea, consists of vast numbers of a harmless microscopic plant called Skeletonema costatum and poses no threat.
Long term monitoring of natural events like plankton blooms is a key part of nationwide programmes to understand and predict how our seas may be changing. Using satellites to detect the timing of such blooms is one way of trying to discover how the oceans are being affected by climate change and other environmental factors, for example.

19 March 2011
Algal strings (resembling sewage) have been reported from the Dorset coast.
Report by Andrew Cleave
Mucus strings at this time of year are likely to be from Coscinodiscus wailesii - a non-native diatom first detected in UK waters in the mid 70's. There are some lovely images available via Google - it's one of the largest diatoms - the size of a full stop. But the mucus strings - known locally amongst Plymouth divers as "streaming blobby snotters" are what you see.
Factsheet
Comments by Keith Hiscock
on the Marine Wildlife of the NE Atlantic Ocean (Yahoo Group)

Changing scientific names are always a bit of nuisance to Editors. It is understandable when it is because of new scientific research, but is less appealing when the change occurs in the literature applying the rules of precedent over the names. This is the reason why some of the  very common British seaweeds are now known by different names. In the family Gigartinaceae, the common and well known Gigartina stellata has now been given the name of Mastocarpus stellatus. The Pepper Dulse, known as Laurencia pinnatifida is now called Osmundea pinnatifida.

Algae-L is a discussion list on any aspect of freshwater, marine and
terrestrial algae, including seaweeds.

Archives of past messages can be found at:

Other information regarding the list can be found at