Sea Anemones found in the seas around the British Isles reproduce in a variety of ways. Scientific papers on this subject should be treated with caution as some of them are incorrect.

Longitudinal Fission. Some species including the common southern and western species the Snakelocks Anemone, Anemonia viridis (=A. sulcata), reproduce by literally tearing itself into two anemones. Further observations.

Baceral Laceration: Fragments of tissue break off from the base and develop into new sea anemones, notably by the Plumose Anemones, Metridium senile, which is also reported to reproduce sexually.  Another picture.

Sexual Reproduction: Sperm and eggs discharged into the sea. This occurs in the Pimplet Anemone, Anthopleura ballii. 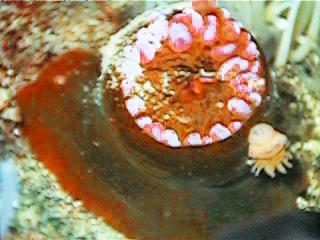 Beadlet Anemones are the most widespread of the British sea anemones, found the length of the British Isles on rocky shores and anywhere where there is a hard surface to attach to. Red, green and brown varieties occur. The best explanation of their reproduction is by parthenogenesis.

However, the author of this piece (Andy Horton) considers the likelihood that they break off internally to be a strong possibility. No evidence of sexual reproduction has been observed despite extensive study. 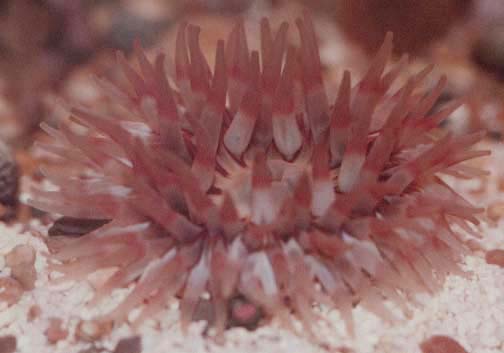 The method of reproduction of the large, common and widespread sea anemone is not known.

Sea Anemones have not been kept in aquaria long enough to establish with any certainty how long sea anemones naturally live, if not predated upon or dying from causes other than old age. However, there are records of large tropical display anemones living for several decades in Public Aquaria, housing several generations of commensal Clownfish, Amphiprion ocellaris. AH

John Ottaway and Ken Sebens have made actuarial tables for anemones.Since they came up with potential lifespans on the order of several centuries, personal experience is unlikely to be a good guide. (Daphne Fautin).

Bob Paine has been watching the same Urticina crassicornis at Tatoosh Island since 1968, and it has not moved nor changed in size.

There is the story of the legendary anemone kept in Edinburgh, I think, for something like 90 years; the anemone died of a seawater system malfunction, not old age.  This is reported in Ricketts and Calvin among other places.

I know that John Pearse has kept Anthopleura artemesia in captivity for well over 10 years and they're doing just fine.

Ken Sebens calculated from population-level data (observed field mortality rates) that the average age of Anthopleura xanthogrammica on the Washington coast must be around 500 years with some individuals, theoretically anyway, having been around since the Pleistocene (this is heresay from Bob Paine based on Ken's calculations).

Hope these help!  I would very much appreciate hearing about any other responses you receive."  Good luck!  Dave

Among single-celled organisms, which reproduce by cell division, the concept of an individual life span loses some validity, as in a sense the individual continues to exist indefinitely. Thus arbitrary definitions of individual lives, such as the period between reproductive divisions, may be used to estimate life span, but such estimates are not comparable to those for sexually reproducing organisms.

Anemones are multi-celled organisms, but in some respects (reproduction) may resemble unicellular organisms. However, even sea anemones not observed to reproduce sexually could do so on occasions. AH