Out of the water the tentacles retract and the Beadlet Anemone looks like nothing more than a featureless blob of jelly attached to groynes and rocks between the tides. When submerged the cylindrical body is partly hidden by up to 192 poisonous tentacles that flow out to capture unwary prey. 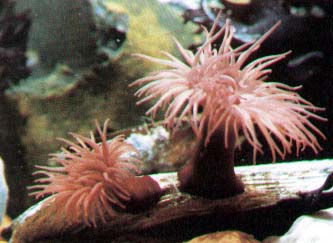 The popular name is derived from the blue beads (acrorhagi) that are arranged in a ring near the parapet at the top of its column, and are normally hidden from sight.

British shores are a rich hunting ground for Beadlet Anemones, where it can be found at low tide on rocky coasts, and even on groynes in some sandy areas. It is very common and even abundant in suitable sheltered habitats reducing in frequency as the degree of exposure increases. On pebble beaches where the fierce action of the waves creates a desert where hardly any life is present, the anemone is absent. Otherwise, under stones, in rock pools, submarine caves, attached to overhanging boulders, amongst the mussel beds in fully saline creeks, on all shores of the British Isles, it is plentiful.

For a sedentary creature, the world distribution is phenomenal, the known zoogeographical range stretching from the Kola peninsula on the Arctic coast of Russia to the tropical Gulf of Guinea in West Africa. It is notably absent in the Baltic and the approaches, being unable to maintain a population in brackish waters. It can be found almost anywhere on rocky shores and in the shallow seas, although the principal location is midway between the low and high water marks.

Specimens can be removed for aquarium study by carefully inserting a fingernail underneath the base and peeling the anemone from its attachment. The tentacles will feel slightly tacky to the touch.

Surprisingly, for such a common animal its biology is little known, and even what it feeds on in the wild is a mystery. It is easily kept in aquaria because it feeds readily on dead organic matter like boiled mussel. The tentacles slowly manoeuvre the food through the slit-like mouth into a large gastric cavity.

In the wild, I anticipate that small crustaceans and zooplankton form the bulk of its intake, with worms. The largest Beadlets are found on mussel beds and the flesh of this bivalve mollusc undoubtedly becomes a major food item.

Frequently the anemones will be hidden in crevices or concealed in narrow fissures. They are not attempting to hide but choosing the best feeding station. A considerable part of their diet is borne by the movement of the tides and their powers of movement are usually limited to judiciously creeping into a spot where they can obtain sustenance from the ebb and flow of the waters. In winter when planktonic organisms are scarce, Beadlets have to endure months of poor nourishment and even starvation, when they will dwindle to a fraction of their summer size. They are also able to loosen their adherent base and allow the tides and currents to propel them to a different location. In aquaria they will clamber over the glass sides.

The tentacles and beads contain stinging organs called cnida of which the nematocysts are the most important. These tentacles will extend in an active search for small prey. The anemones will also alter their shape of the column when the isolated sense cells detect the presence of food, whether it is plankton or organic remains. The anemone then fires a poisoned barb (nematocysts) to paralyse small organisms.

Conceivably, in the still waters of a rock pool free swimming creatures will wander into the tentacles. However, there are two reasons why this unlikely. Firstly, in the still waters there is very little movement. Low tide is the quiescent period when the tide pool inhabitants seek shelter. Only when the incoming tide cascades over the pool are the various small fish and prawns stimulated to move. Secondly, the larger animals, prawns and such like have evolved to resist the entrapment of the tentacles. In the hard-shelled condition, prawns would normally be able to break free from the stinging tentacles, and most rock pool fish will quickly dart away at the touch of a tentacle.

After a large item of food has been dispatched down its tubular gullet, the Beadlet Anemone may contract for a period of up to one hour. Afterwards, it will expand to its fullest extent whilst it completes its digestion process. Days later, the remains will be expelled through its mouth, sometimes wrapped up in a glutinous glaire.

In captivity, the Beadlet Anemone may sometimes retract to a quarter of its normal size and wither into a woeful and unhealthy appearance to such an extent that it appears to be dying. This extraordinary behaviour seems to be normal because by the time that the aquarist has debated what to do, the anemone will have returned to its original splendour.

A wide tolerance of natural conditions augurs well for its success in captivity. As long as elementary care is taken, like water changes (about 20% every month), salinity about 3.4% (not below 3.2%) and sufficient food, this anemone is virtually indestructible and may thrive better than they do in the wild. Specimens kept in small aquaria for over 10 years is usual.

Tompot Blennies, Parablennius gattorugine, will attack Beadlets and all anemones in aquaria, and Grey Mullet, Chelon labrosus, kept in the same tank may pinch all the food meant for the anemones. Conversely, some of the small delicate fish like 2-Spot Gobies, Gobiusculus flavescens, may blunder into the anemones and eventually succumb in the confines of a small tank. 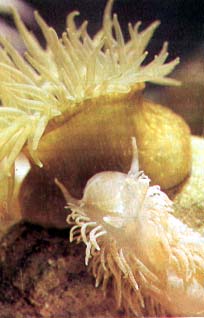 However, the greatest natural enemy of the Beadlet and other anemones is the Grey Sea Slug, Aeolidia papillosa. The anemone is distasteful to most other animals.

Colours vary from the richest Burgundy red to a profusion of browns and greens, and includes a spotted type that resembles a 'strawberry'. However, the mixtures are not nearly so varied as the Sagartiidae family of anemones (see next issue) and can be separated into three distinct colour schemes which are sometimes regarded as different species. These are the red, green and strawberry varieties as distinguished by the colour of the column.  In some locations chocolate brown specimens can be exclusively present in hundreds but these brown specimens were found to eventually turn green in aquaria over a period of one year. Colour schemes of Beadlet Anemones will be explored in a later article. 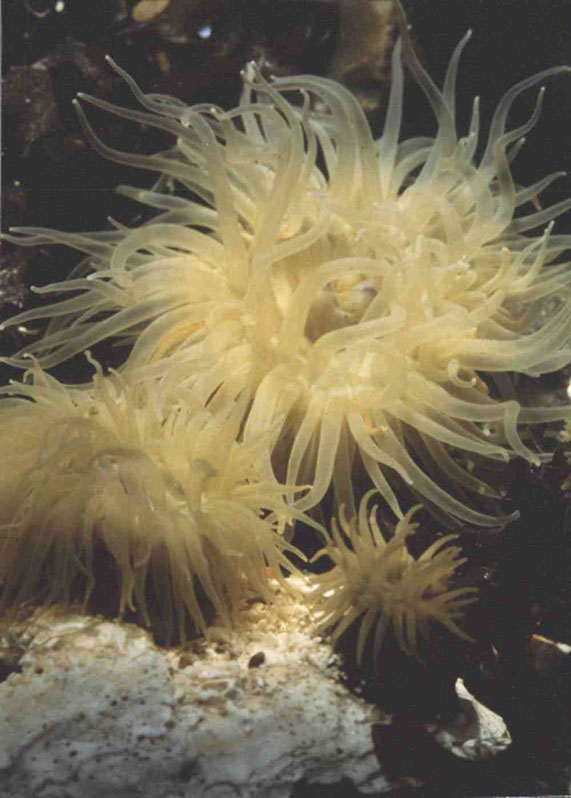 Wild specimens have been measured with a base diameter of 40 mm in both the green (brown) and strawberry variants, but only to 35 mm in red specimens. These are my observation from thousands of specimens on the Sussex coast, and hundreds on other shores. In captivity, the strawberry variant has attained 65 mm across the base with an extensive display of tentacles.

This immediately attracts the attention of the 'rockpooler' because of the frequency of viviparous young appearing in freshly captured specimens. Normally up to 12 miniature counterparts of the adult, with 12 tentacles are spurted out to attach themselves on a rock adjacent to their parent. 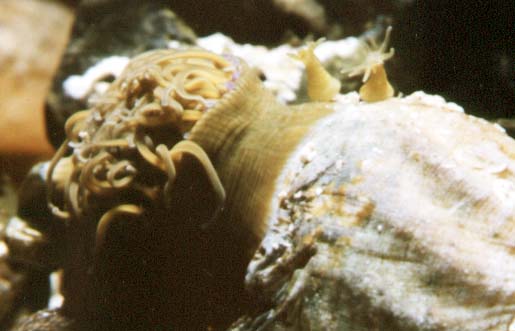 It is by no means clear how these young are produced, but the consensus opinion amongst BMLSS members is by asexual means. Reproduction will be discussed in a later article.

Beadlet Anemones are very distinctive. In cases of doubt the ultramarine beads should be searched for. Acrorhagi are also present in the much rarer brown coloured Pimplet Anemone, Anthopleura ballii. Beads contain stinging nematocysts and are used in intraspecific territorial battles, and fights between different species of anemone.

Novices should be careful not to confuse the Snakelocks Anemone, Anemonia viridis, with green Beadlets. Green Snakelocks usually have purple tips to their long flowing tentacles.

The scientific name Actinia equina is an original Linnaeus name and has remained unchanged until the recent alterations in the specific names which will be delved into in part 2 of this article.