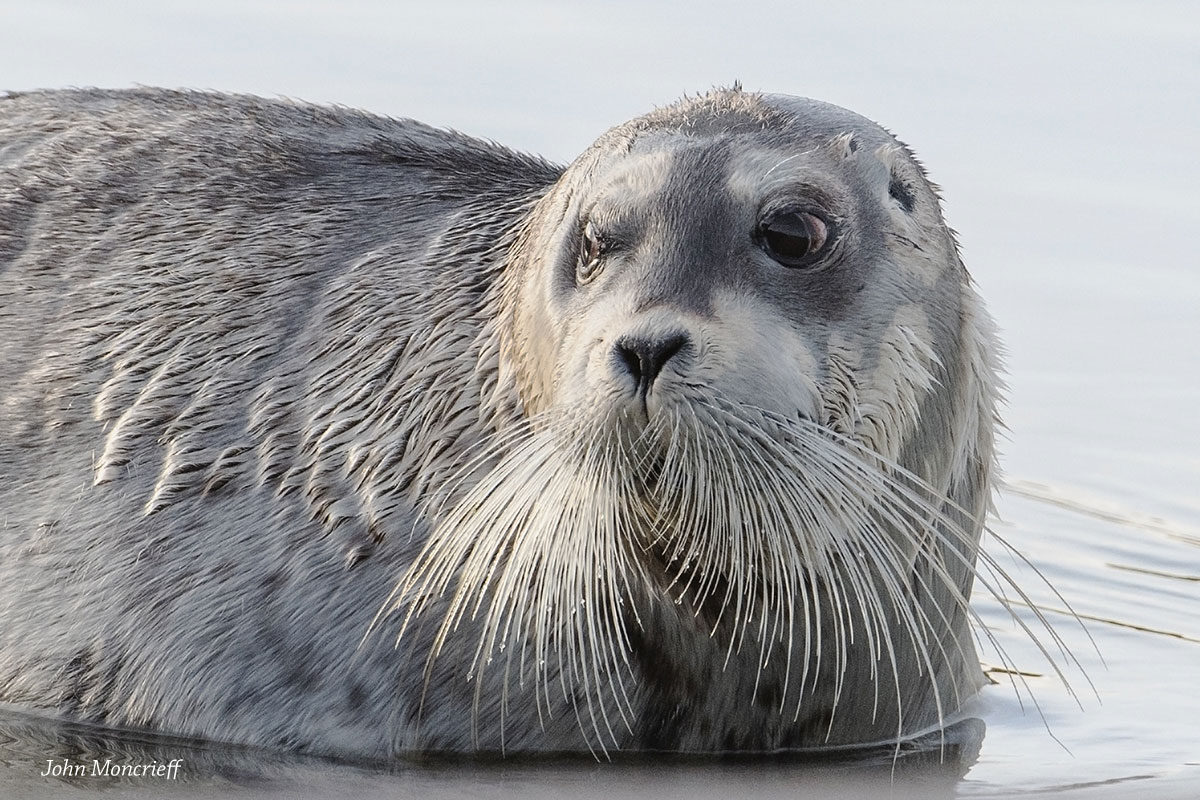 A Bearded Seal, Erignathus barbatus, made a visit to Bridge End, Burra, in the Shetland Isles.

18 May 2018
A Bearded Seal, Erignathus barbatus, was spotted at Lerwick in the Shetland Isles. Bearded Seals are a non-migratory Arctic species that feed on molluscs including clams. Visits to the most northerly of the Scottish isles are rare and newsworthy.

17 November 2013
The Bearded Seal, Erignathus barbatus, was still at mid-Yell in the Shetland Isles. 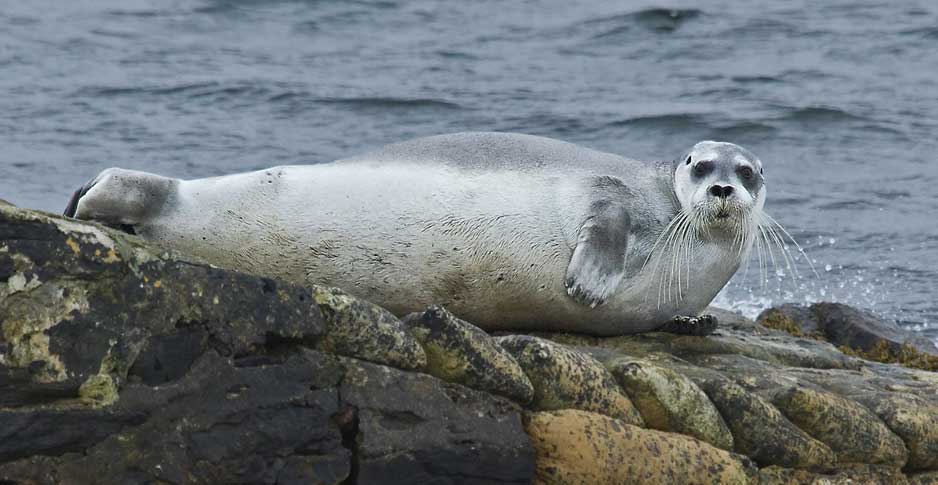 Bearded Seal at Yell
Photograph by Steph Cowie on flickr

The Bearded Seal, Erignathus barbatus, was photographed at Yell.

9 June 2013
There seems to have been another appearance of the Bearded Seal, Erignathus barbatus, made an appearance at  Basta Voe, in Yell in the Shetland Isles.
Image

Nature in Shetland Report with a Photograph

23 March 2013 - 3 April 2013 et seq
A Bearded Seal, Erignathus barbatus, made an appearance at TBS Salmon farm in Basta Voe, in Yell in the Shetland Isles. This Arctic seal is a rare visitor to even the most northernmost Scottish islands.
Image 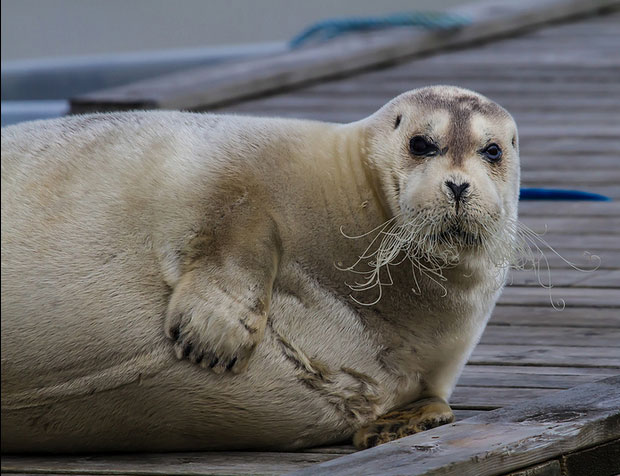 19 February 2012
A Bearded Seal, Erignathus barbatus, was seen by lots of people on the beach at Monifieth (north shore of Firth of Tay) in the afternoon. Because of the scarcity of visits by this Arctic seal, it may be the same individual that was seen hauled out on a dock at Tayport just after Christmas 2012. 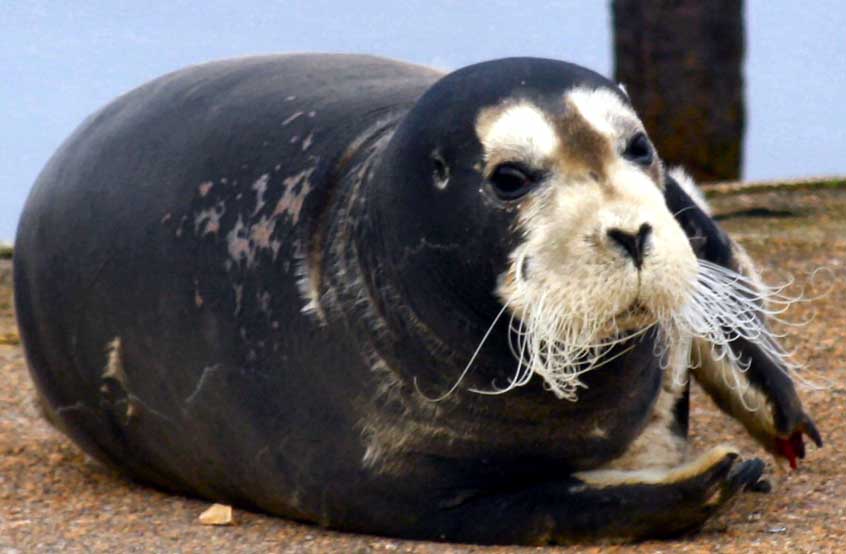 27 December 2011
A Bearded Seal, Erignathus barbatus, hauled out on a dock at Tayport (on the south coast of the Firth of Tay, near Dundee), east Scotland. Its arrival followed a spate of storms across Scotland.

A Bearded Seal was also seen at St. Cyrus (near Aberdeen) about 30 miles further north in November 2011. In view of the rare sightings of this Arctic seal around the British Isles it is likely to be the same one.

Report and Photograph by Sam Gibson
3 March - May 2008 onwards 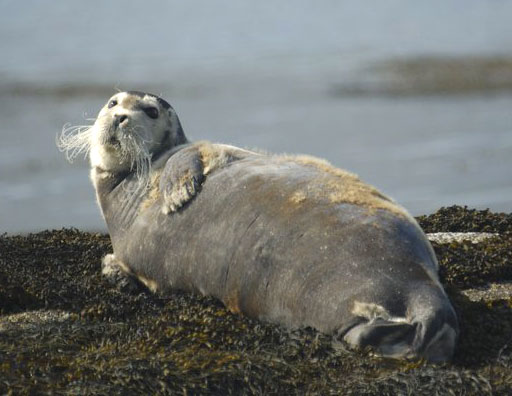 A Bearded Seal, Erignathus barbatus, was spotted at Loch na Keal on the Isle of Mull, a large island in the Inner Hebrides, western Scotland. The healthy seal had hauled itself up on to some dry rocks when it was first seen. Subsequently, it has been unpredictable in its movements. The Bearded Seal was first seen by David Woodhouse (Mull Wildlife Expeditions) on 3 March 2008.
Photograph by Rob Baxter
Report by David Sexton (RSPB, Mull)

19 November 2007
A Bearded Seal, Erignathus barbatus, was seen at Chanonry Point area on the coast of the Moray Firth near Inverness, Scotland, having been there for about two weeks.
Link to a Photograph

Report by Farnboro John on the Bird Forum
BMLSS Seals 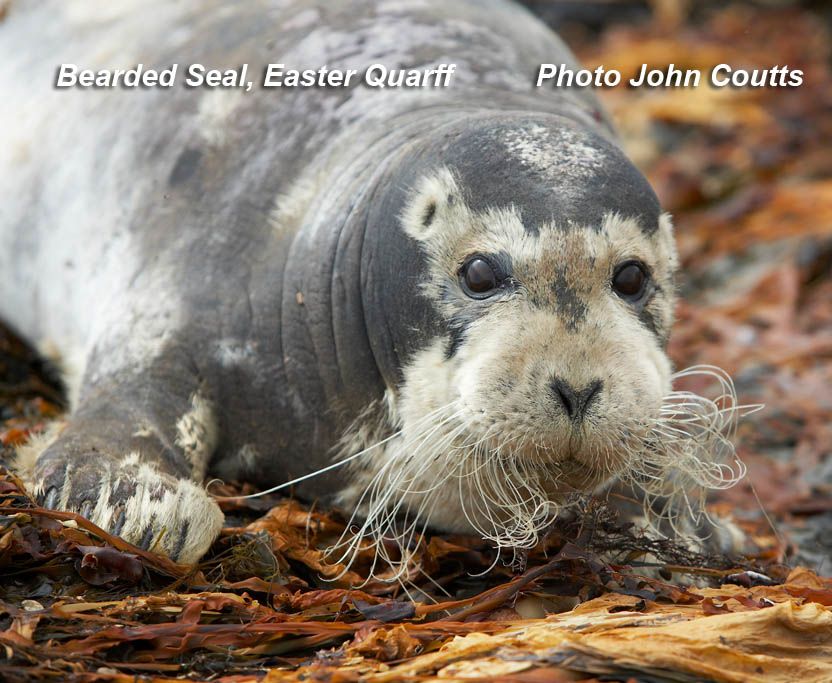 1 April 2005 for 2-3 weeks
A Bearded Seal, Erignathus barbatus, was resident in the Ouse, Finstown, Orkney for 2-3 weeks from the beginning of April. It came as a great surprise to me when I was informed by a dog walker on the Ouse that she had come across an unusual seal asleep on the shoreline. On investigation I identified the seal as a juvenile female Bearded Seal. 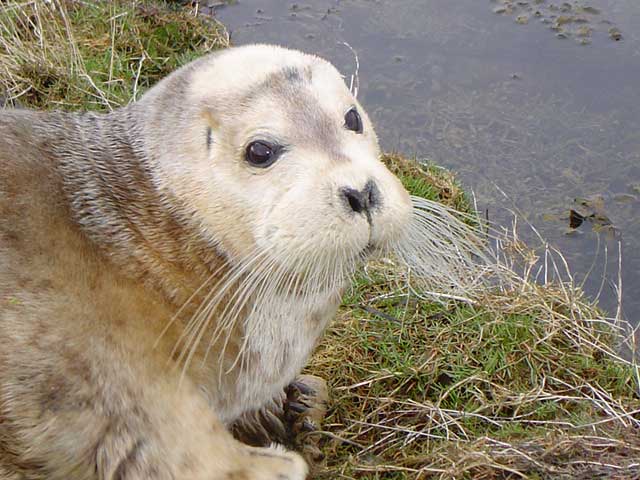 Bearded Seals are normally found all along the European, Asiatic and North American coasts of the Arctic Ocean. Its food consists entirely of bottom-living animals including shrimps, crabs, clams, whelks and bottom fish such as flounder. It is a very unusual seal to be found in the waters of Orkney.


c. 11 September 2002
A Bearded Seal, Erignathus barbatus, was found near Leenane (the entrance is Killary harbour), in south County Mayo, on the west coast of Ireland. This is the first record of this Arctic seal for Ireland.

Report by Tony Murray via the Irish Bird Network

The female seal was found at the head of the fjord (Killary harbour) on a grass verge, beside the bridge in Leenuan, (53° 60'N, 9° 50'W) calmly watching the children go to school. She is 1.5 meters in length, close to 60 kg (best estimate).

The seal recuperated for two months in the Killarny Salmon Farm before being liberated into its natural Arctic seas courtesy of the Irish Navy who collected the Bearded Seal on 6 November 2002.
Full Report

23 January 1999 to February 1999
A vagrant Bearded Seal, Erignathus barbatus, has made a sustained visit to Hartlepool in north-east England. It is over 2 metres long (6-8 ft), grey (more silvery on underside), very short snout, dark chestnut eyes, long white 'moustache' reaching to well below its chin.  It sits in water with head and back out of water (apparently typical).  It has been much photographed and featured on the local NE BBC TV News on 27 January 1999.
Report by Jeff Higgett (Ipswich).
Seals Web Page
Bearded Seals are a non-migratory Arctic species that feed on molluscs including clams. Hartlepool is so far outside its normal range (there have only been 8 records in the Shetlands, all since 1977, but also one record from 1956) that I expressed doubts about its correct identification. Of the two species of seals resident in British waters it is the Common Seal that has the longest whiskers and the one that be most likely mistaken for a Bearded Seal, if was not for the overall size. Common Seals do not exceed 2 metres in length. Grey Seals reach 3 metres long, are commonly found off north-east England. However, their whiskers are not nearly so ebullient. AH. 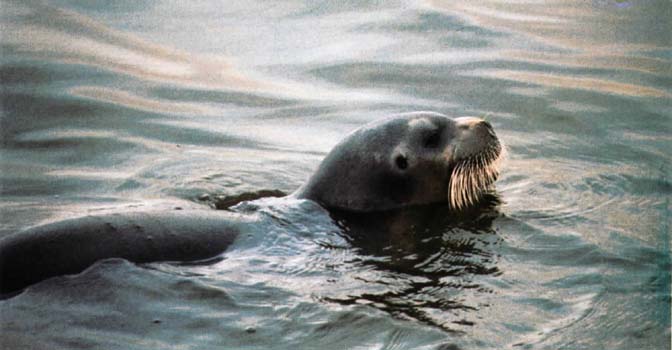 sent in by Steven Gantlett (Editor of Birding World)

Bearded Seal Erignathus barbatus, Hartlepool Fish Quay, Teesside, January 1999 (Martyn Sidwell).
This, the first Bearded Seal ever to be twitchable in England, was the undoubted non-avian highlight of January 1999. From 20th January, it delighted many observers as it frequented the same dock as the famous 1981 White-billed Diver. The only other example of this Arctic
species recorded in England this century, the animal taken into care in Lincolnshire in June 1998 (photo Birding World 11: 211), was flown to Shetland and released (fitted with an orange tag on its left rear flipper) at Hillswick on 13th September. Nine Bearded Seals have been recorded in Shetland since 1977 (where the last was in 1993) and there are at least three records from Orkney.

And still to be published in next month's Birding World:

Another English Bearded Seal
The popular Bearded Seal present at Hartlepool in January and February 1999 was indeed the second ever to have been twitchable in England (Birding World 12: 1), but another English record has come to light. Kevin Thornton tells us that in 1991 there was one in the Medway Estuary, Kent, which remained from late February until early June. It was apparently seen from boats and 'private piers. The very first Bearded Seal record was a specimen captured ay Burnham Overy on the east coast in 1892. 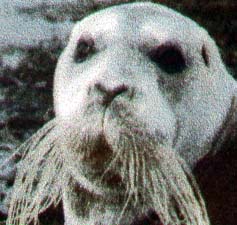 Gordon Coward rang me from Braunton, North Devon, to explain that my records of Bearded Seal, Erignathus barbatus, from the Shetlands and elsewhere did not include one he discovered in the Shetland Isles in 1956. The first record on the Shetland Wildlife pages was from 1977, but now the old record has been included. <http://www.wildlife.shetland.co.uk/marine/seals.html> 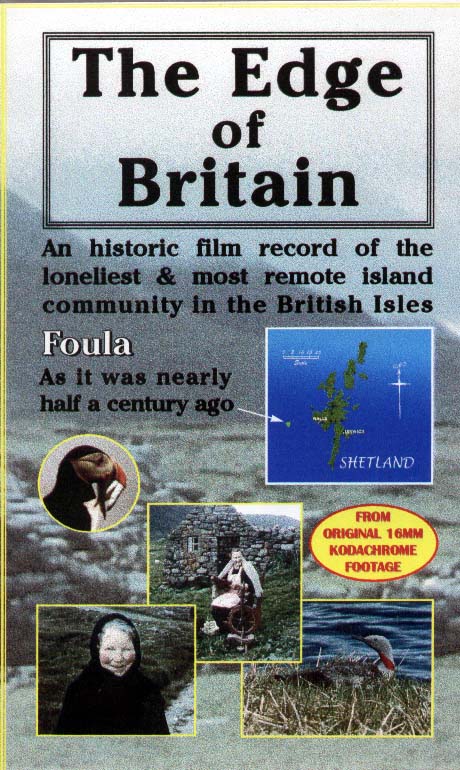 The Bearded Seal was first discovered at Walls on the west coast of the Shetland mainland in June 1956 whilst I was awaiting the little boat to come across to take us to the remotest inhabited island in Britain called Foula, which is located over 20 miles to the west of Lerwick (on the Mainland). The Bearded Seal was recorded on cine film and is included in the video called "Edge of Britain" which includes the bird life of the Shetlands, including Bonxies and other sea birds. At the time it was not realised how unusual this Bearded Seal discovery was, but it is still the first record for Scotland, although in 1892, one was washed up on the east coast of England at Burnham Overy.

This seal is as you mention an Arctic seal quite common on Spitsbergen. Animals reaching the coast of Norway are usually juveniles.

From some distance (on TV ex.) the long whiskers which are curled at the tip ("always" in adults) - as in the latin name barbatus" (bearded), are the best characteristics. Adults reach 3 metres (normally 2,25 m) and 300 kg. In Norway it is often called Blue Seal, because of the coat looks blue when the animal is dry.
In close up the best characteristic is that this species has four teats (the others have two).

If the size estimate is correct, it could only be mistaken for the Grey Seal, Halichoerus grypus. This species have a very characteristic head with a long straight "nose", - the whispers are not as obvious - but they are quite long in adults also in this species (but not with curls at the tip).

The bearded seal eats as you mention benthic animals; - crustacean, bivalves, gastropods and fish. It dives down to 130 metres. They can reach an ages of 30 years. They are fertile when they are 5-6 (female) and 6-7 (male) years old.

Because of the scattered occurrence it has never had an great commercial importance. However, this species have a great importance for the Inuits still living traditionally.

The estimated population of the Bearded Seal is between 600,000 to 1 million animals. This probably makes it the sixth most prevalent seal or sealion in the oceans. The most numerous is the Antarctic Crabeater Seal, Lobodon carcinophagus, with a rising population in excess of 16 million.