GARDEN BIRDS, BUCKINGHAM WARD, SHOREHAM-BY-SEA
28 December 2004
21 different birds were spotted in the back garden of 40 The Drive (near Buckingham Park), (TQ  219 063), during the weekly visits in 2004. The most prevalent birds were Starlings with 143 recorded on 18 different occasions, the most often seen was the Blackbird on 26 occasions with 66 recorded birds. Other birds often seen included Greenfinches 115, Chaffinches 46, Blue Tits 44 and Collared Doves 35. Highlights included a Goldcrest and Goldfinches and the greatest surprise was the single appearance of a Rook. Feeding was almost regular during the winter, mostly black sunflower seeds, but sometimes the birds ate them before the following week. Feeding did not occur during the summer when almost all the birds were absent. Peanuts were included from the autumn. The Laburnum Tree was shelter but this blew down in the July 2004 gales. The corvids roosted in the large trees bordering the road and descended to the bird table or summer house roof for scraps in hard weather. The small garden pond was specifically attractive to Song Thrushes, Blackbirds and Blue Tits. 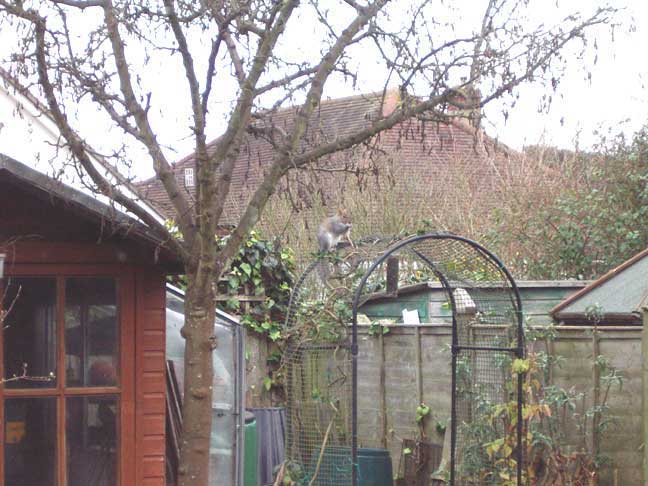 Some birds tend to flock in large numbers. During 2004, the largest number of a single species recorded in the garden at one tome was Starlings 23, followed by Greenfinches 12, House Sparrows 11, Chaffinches 10 and Blackbirds 6. The Robin arrived at the end of October 2004 and was resident ever since, at least up to the middle of March 2005.
The most species recorded in the garden in one day was eleven, record on three days in March 2004, the 7th, 27th and 29th.

Back to Garden Page