Text and photographs (unless otherwise stated) by Andy Horton

How many bridges are there in the Adur District? In Shoreham?  There is 17 if you count rail and footbridges over roads and small road bridges over water and when is a small bridge not really a bridge at all?

Five bridges span the main stream of the Adur in the boundaries of Shoreham. All them except the flyover impede navigation of craft up and river and as the port moved steadily eastwards over the centuries. 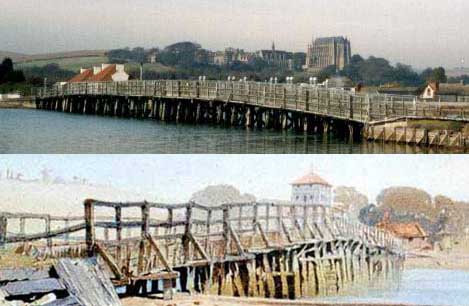 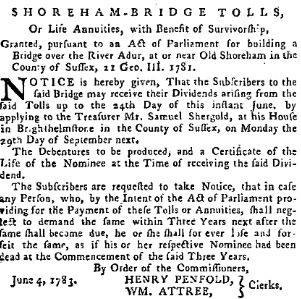 After travellers had to endure a bumpy ferry crossing at Old Shoreham for centuries or when travelling along the south coast had to make a detour to the substantial medieval stone bridge at Bramber, a wooden bridge was eventually completed at Old Shoreham in 1781. This may have been part of the rebuilding of the town after the Great Storm of 1703 that caused destruction along the coast. In 1916 the wooden bridge was rebuilt in the same design* and up to 1970 was the main A27 road for all traffic passing through Shoreham. It was called the Toll Bridge after the railway line to Horsham via, Bramber, Steyning, Henfield, Partridge Green, West Grinstead and Southwater was constructed and opened in 1861 and tolls were collected for all vehicles crossing the level crossing gates on the east side of the river. The bridge closed to motorised traffic on 7 December 1970.

(* There is no evidence for the bridge being rebuilt to a different design between 1791 and 1867 above.) 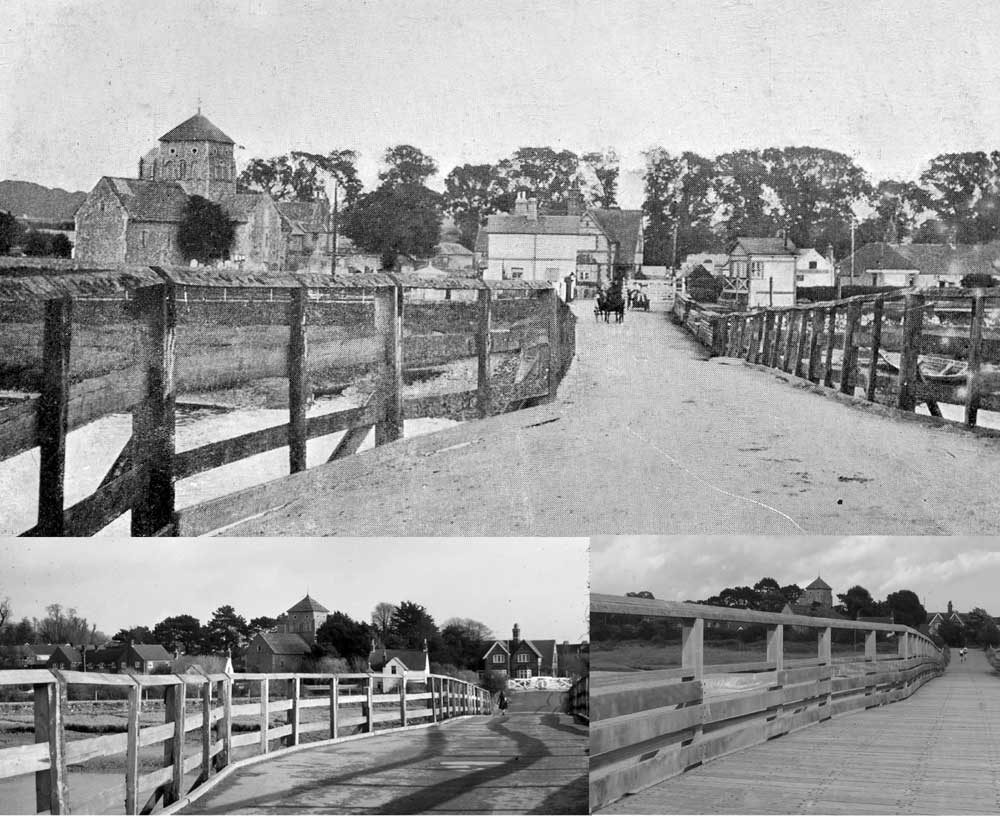 I have roughly measured the Toll Bridge to be about 166 metres long.

The first meeting to discuss proposals for a new bridge across the River Adur to replace the existing ferry was held in May 1780. Trustees were appointed under an Act of Parliament entitled An Act for Building a Bridge Over the (said) River at or near Old Shoreham, 21 GIII, 1781, and met for the first time in April 1781. The scheme was financed by fifty subscriptions of £100. Dividends were distributed by a system called "tontine". By this scheme subscribers were classified by age into Class 1, 2 or 3 shareholders and the dividends calculated proportionately by class before being shared among the surviving members of each class. The bridge was opened, and the first tolls collected, in March 1782. The tolls were leased by auction from 1803 to 1832, (Add Mss 31193-31221)

In 1821 the weather conditions caused the River to overflow its banks, which damaged the bridge and exposed the foundations. The trustees received several reports from surveyors on the condition of the bridge during 1823 (Add Mss 31149 ff.70v-78). At this time citizens of Worthing proposed moving the bridge, but this was rejected by the Earl of Egremont. Instead, the trustees decided to contract out the maintenance of the bridge on a triennial basis

An application was made for the construction of a railway from Shoreham to Chichester in 1843. Compensation of £10,000, to be divided amongst the surviving nominees in lieu of the annuity, was agreed between the trustees and the Brighton and Chichester Railway Company (Add Mss 31232-31234). The railway opened in 1845 and the accounts of the trustees closed in July 1846

The original tollbridge of 1781 was built of Oak. The reconstruction in 1916 was in Jarrah and Eucalyptus Blue Gum.

The British Railways Board finally closed the bridge to road traffic on 7 December 1970. At the time the bridge closed it was the last public road bridge in Sussex to be controlled by a toll.

During 2008 the bridge underwent a major refurbishment with the aim of extending its life for a further 30 years. The bridge has now been designated a bridleway and is a popular local landmark and important route used by both leisure and commuter traffic on foot, bicycle and horseback. It is also a popular spot for local fisherman. The refurbishment completely replaced the pilehead crossbeams, deck support longitudinal beams and handrails with selective replacement and reinforcement of components of each of the 27 pile bents. The project was managed and partly funded by West Sussex County Council. The rest of the funding came from the Heritage Lottery Fund, landfill tax credits and the Old Shoreham Tollbridge Community Trust.

The bridge was listed at Grade II* by English Heritage on 12 October 1954.
Toll Bridge (Wiki)

Toll Bridge Specifications
The type of timber is not mentioned. The length is given as 500 ft (=152 metres) 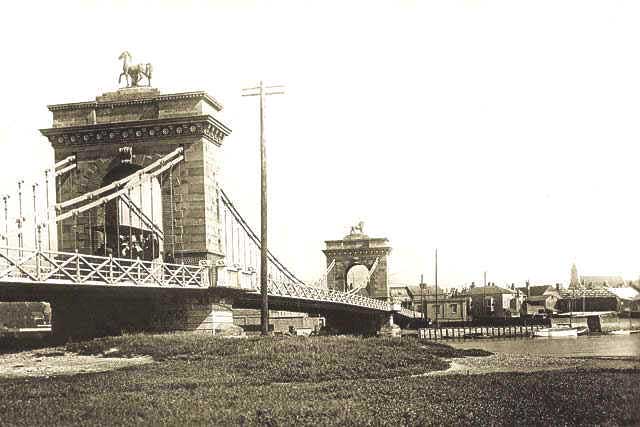 In 1833 The Norfolk Suspension Bridge was opened. It was the same design as the famous Chain Bridge (originally built 1849) that crosses the River Danube between Buda and Pest in Hungary. W. Tierney Clarke and Captain Samuel Brown designed the first Norfolk Bridge. 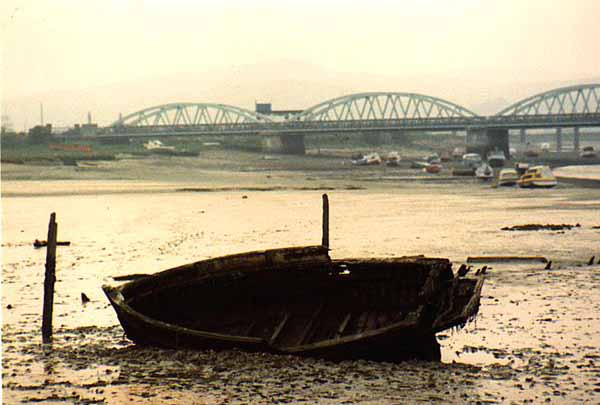 Contractor's board attached to the bridge reads E.C. and J. Keay Ltd Engineers.

I have roughly measured the Norfolk Bridge to be 130 metres long. 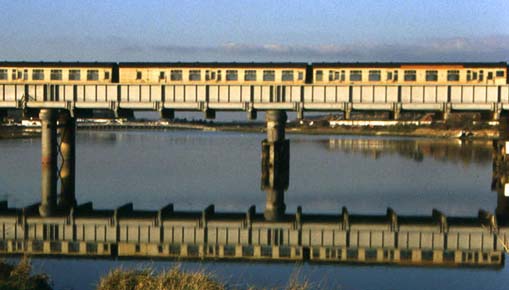 The first railway from Brighton to Shoreham, via Hove, Portslade, Southwick and Kingston was opened in 1840. It was not until 1845 that the River Adur was spanned with a wooden trestle bridge to carry the line on to Worthing. The current steel bridge replaced the trestle bridge in 1893.

This is a wide part of the river and I have roughly measured the length of the viaduct at 305 metres.


Shoreham Beach did not begin to be extensively populated until the footbridge was constructed in 1921, from the newly named Shoreham-by-Sea, which acquired its suffix in 1910. The central part of the bridge could be opened to allow the passage of large vessels. It was about 225 metres (246 yards) long. The official opening of the footbridge was on 3 February 1921. This bridge was demolished in 2013. 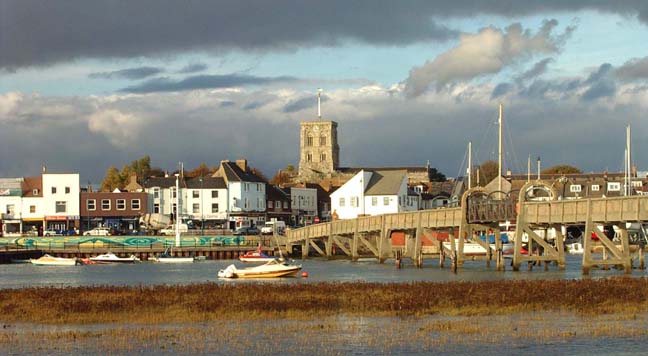 Shoreham from the SW end of the Footbridge

June 2011
There are imminent plans for a replacement bridge. 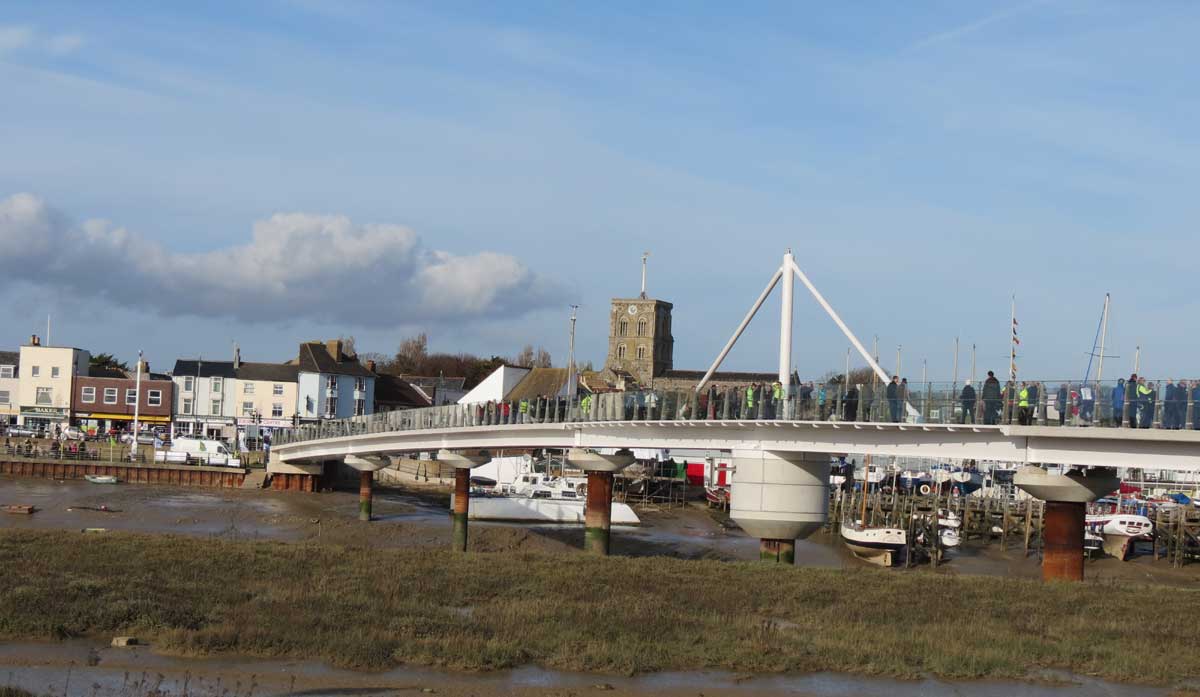 Adur Ferry Bridge (from the west) 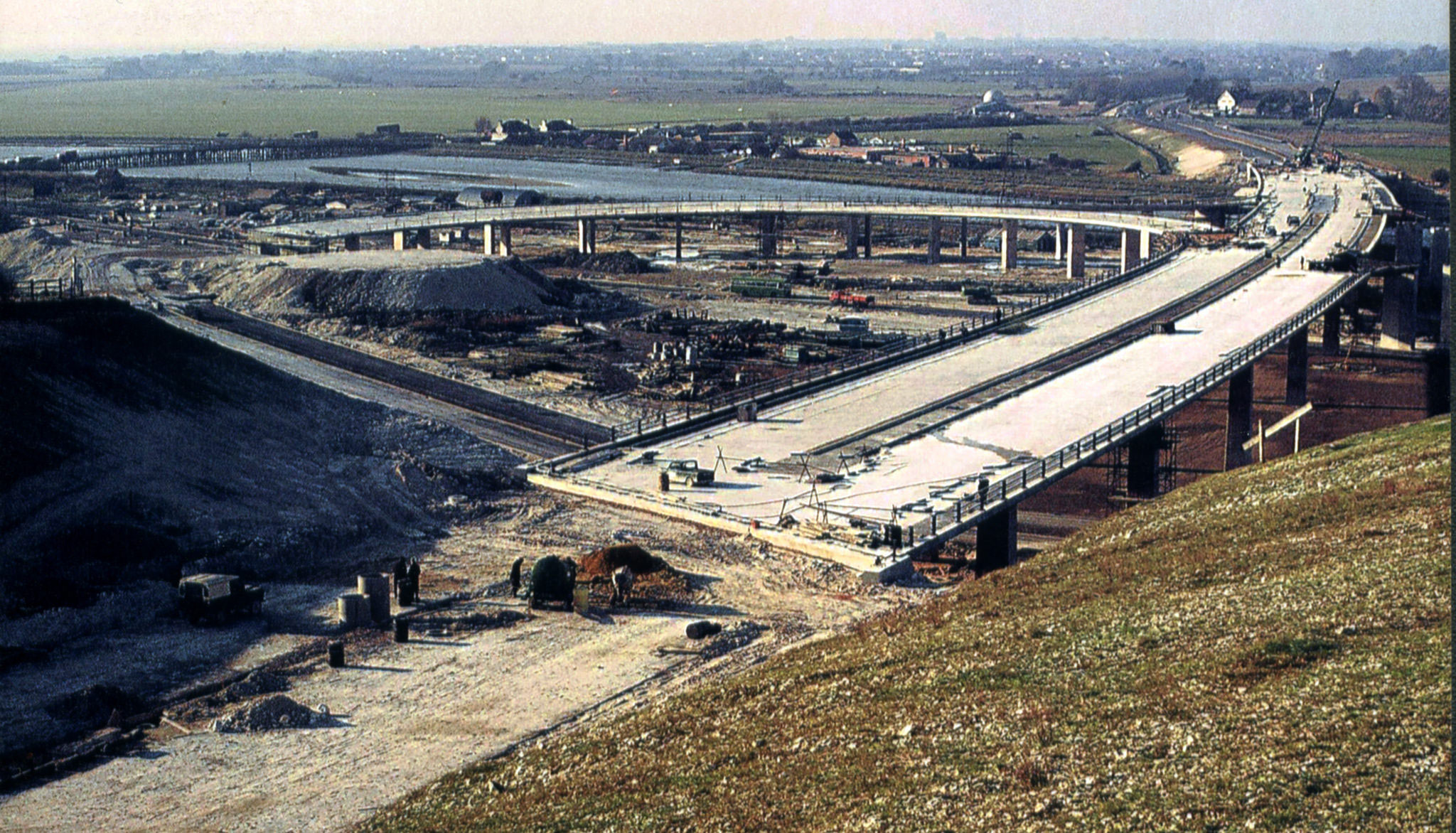 The Adur Flyover was one of the earlier box girder bridges that had problems caused by their design and needed subsequent strengthening. Construction commenced by McAlpines on 1 February 1968. The by-pass opened to through traffic in 1970. The first unofficial crossing by car was on 19 March 1970, the first traffic east to west from 14 May 1970 and both ways on 21 May 1970, although the slip roads did not open until July 1970.