216+ butterflies of fifteen species (equal the most species in a day this year) added to by::

In the late afternoon I made a brief journey to Old Shoreham and added a Comma Butterfly to the species tally from the Butterfly Copse (next to the Waterworks Road) and a few minutes later added a confirmed Green-veined White from the Coastal Link Cyclepath north of the Toll Bridge, making seventeen species of the day and one short of my all-time day record. Although I was not counting out other butterflies, there was also an additional Peacock, Red Admiral,Speckled Wood and Holly Blue in the Old Shoreham area. As I had reached 17 species I thought I would cycle to Upper Beeding to try and increase the species tally. As is often the case, I was out of luck and although there were about five more Peacock Butterflies taking their count into double figures for the day, as well as three noted Speckled Woods and uncounted Large Whites, Gatekeepers and Meadow Browns.

Seventeen species (best of the year)

The Wall Browns were discovered at different locations, the first one on the bridlepath verge near Slonk Hill Farm, the second at the top of the hill between Mossy Bottom and New Erringham, the third on the verge by New Erringham, the fourth in a field to the west of the road to Mill Hill, the fifth on the Pixie Path to Mill Hill and the sixth on the Coastal Link Cyclepath north of Old Shoreham.

Over 200 butterflies of fourteen species. 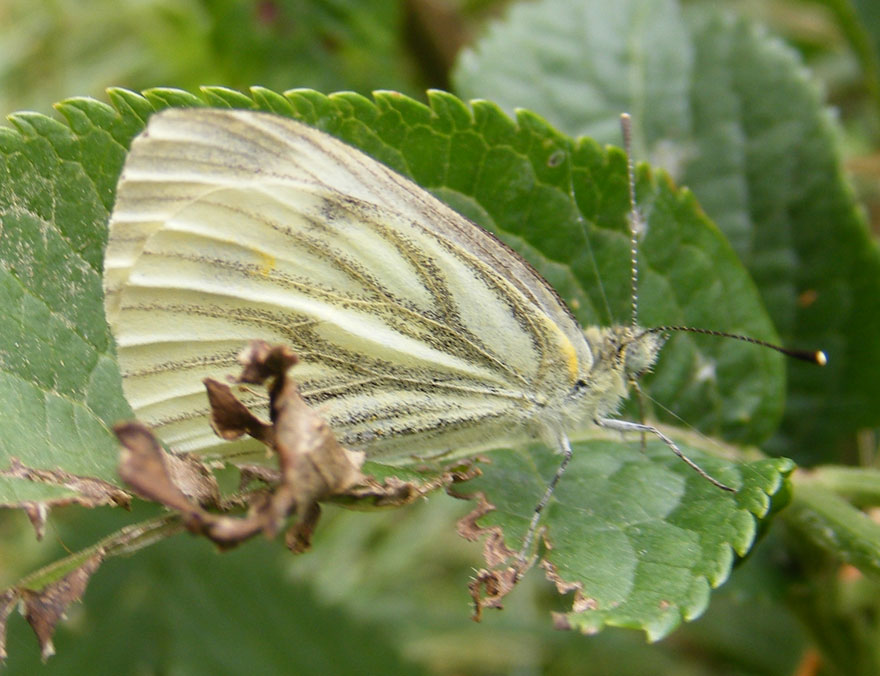 15 July 2008
As so often happens when one butterfly species ceases (the Small Blues were not recorded) than fresh butterflies appear with a new brood. The new ones were the occasional Holly Blues in Shoreham town and the outskirts, one Wall Brown over the A27 dual carriageway north of the Dovecote Estate, and a Brimstone Butterfly on the the lower slopes of Mill Hill. The occasional Peacock Butterflies were fresh as well. Chalkhill Blues were just beginning on Mill Hill with 24 strong flying males noted. All but one were seen on the lower slopes and the other one in the Triangle middle slopes area.

6-spot Burnet Moths were occasionally seen on the meadow southern bank of Slonk Hill and all over Mill Hill, with most on the upper meadows where a Silver Y Moth was also spotted.
Adur Moths

Fifteen species of butterfly (the most in a single day this year)
(Three species seen on 14 July 2008 and another one from 13 July 2008 were not recorded)
(The unrecorded species were Comma, Small Tortoiseshell, Small White & Small Blue)

14 July 2008
In the early afternoon, butterflies were common on the Adur Levels in the weak sunshine. I recorded frequent Meadow Browns, occasional Small Skippers, frequent Gatekeepers, occasional Comma Butterflies, one Small Tortoiseshell (on the towpath near Botolphs), occasional Peacock Butterflies, occasional Red Admirals, one Marbled White (on the river towpath) a few Small Skippers, one Speckled Wood, one Small White and frequent Large Whites. The Marbled White flew strongly, without settling, from the towpath by the River Adur over a hay meadow which was being cut and baled.

13 July 2008
On rather dull day, the expected smattering of butterflies put in appearance on the southern meadow bank of the Slonk Hill Cutting with frequent Gatekeepers, occasional Ringlets, Meadow Browns and Small Skippers, plus a few Large White Butterflies and at least one Burnet Moth. On the Buckingham Cutting south, the one Small Blue seen was rather ragged and worn. The Pixie Path added a Comma Butterfly.

By the time I arrived at Mill Hill about 11.45 am, the sun had disappeared behind a cloud for the whole duration of my stay of about 45 minutes. Not suprisingly the butterfly tally was low: frequent Gatekeepers, occasional Meadow Browns, two Chalkhill Blues (including one female), one Marbled White, one Small White (could have been a Green-veined White?) and one Small Skipper on the lower slopes, plus another Cinnabar Moth. The small pyralid moth, Pyrausta nigrata was frequently seen on the lower slopes of Mill Hill in the afternoon. Most of them were so faded that they were originally mistaken for one of the other pyralids. A Speckled Wood was seen in the tunnel of Hawthorn as I returned by the ridge route.
Eleven butterfly species

11 July 2008
Blustery conditions (Force 5 gusting to Force 6), but at least the rain held off: a few butterflies were in flight, firstly a Large White and two pairs of Gatekeepers on the Waterworks Road, Old Shoreham, followed by three Meadow Browns, and then two sparring Red Admirals over the nearby Butterfly Copse.

Another two Chalkhill Blue Butterflies flew over the lower slopes of Mill Hill, with occasional Gatekeepers, a Large White, and two small pyralid moths, Pyrausta nigrata and Pyrausta despicata. There was a Red Admiral in the scrub to the north-west of Mill Hill Nature Reserve as I returned by the ridge route where the wind was too great for anything other than a few more Gatekeepers.
Five species of butterfly

6-10 July 2008
Four days of continual gales and heavy rainfall prevented any visits to Mill Hill. On the fifth day the planned trip was interrupted by a heavy rain shower.

5 July 2008
The first two Chalkhill Blue Butterflies flew over the lower slopes of Mill Hill, late in the afternoon. They may have been in flight for a few days as the first reports from Sussex of this butterfly was on 1 July 2008. The first Small Purple-barred Moth, Phytometra viridaria, of 2008 was seen on the lower slopes of Mill Hill, with a probable Ringlet Butterfly from the scrub in the north-west of Mill Hill Nature Reserve which would be (if confirmed) the first from the Hill and the only one of the 32 species of butterflies seen in Shoreham that has not been recorded on the hill. The Small Blues were not seen on the southern part of Buckingham Cutting, but a fresh Peacock Butterfly was a surprise. These small butterflies can be elusive and the late afternoon visit may account for their absence. However, they are also right at the end of their flight period.

4 July 2008
My first definite Gatekeeper Butterfly of the year spent a long time fluttering around the Privet on the Coastal Link Cyclepath (north of Old Shoreham Toll Bridge) and it never did settle for a close look. There were at least two more along the cyclepath to Upper Beeding which also hosted occasional Meadow Browns (6+), two Marbled Whites, frequent Large Whites, a few Small Whites, three Small Tortoiseshells, occasional Ringlets and a Cinnabar Moth caterpillar on a Ragwort plant, on a rapid cycle ride which did not involve stopping.
Adur Butterflies: First Dates
Seven adult species

3 July 2008
Nine species of butterflies and skipper  were seen in as many minutes from the southern side of the Slonk Hill Cutting embankment to the southern Buckingham Cutting, included my first Small Skipper of the year, see clearly as it settled on a flower and opened its wings. Earlier a Large Skipper had settled, but it still needed a practised eye (in the absence of the camera which was broken) to differentiate them. On the orchid-covered north-facing bank Ringlets (15+) outnumbered Meadow Browns (10+) with a few undetermined Skippers, a few Large Whites, one sparring with a Marbled White and a Comma Butterfly. On the Buckingham Cutting, south, there were the usual frequent Small Blues (15+) two Speckled Woods in the overgrown hedgerow area, with the first Silver Y Moth of the year.  Later a pristine Small Tortoiseshell Butterfly settled by Old Shoreham Toll Bridge. No Gatekeepers were seen.
Adur Skippers
Adur Butterflies: First Dates
Adur Moths

1 July 2008
A small orangey-brown butterfly fluttered over Dolphin Road, Shoreham. It could have been the first Gatekeeper Butterfly of the year, but it was flying too high in the breeze to be sure. A Burnet or Cinnabar Moth fluttered rapidly over the shingle and vegetation near the Old Fort on Shoreham Beach.
Adur Butterfly Flight Times


Prevalence Definitions (does not apply to birds):

NEW ACFOR SYSTEM OF ABUNDANCE OVER A SPECIFIED AREA:


MultiMap Aerial Photograph of the Adur Levels and the Downs