This species is found on chalk and limestone downland where its food plant is found in abundance. It is also a warmth-loving butterfly, and is typically found on sheltered, south-facing hillsides.


Eggs are laid singly either directly on a stem of the food plant or in nearby vegetation. Like many other Lycaenids, the female butterfly will often crawl around the vegetation, searching for suitable egg-laying sites, before finally laying a single egg. This species hibernates as a fully-formed larva within the egg, the stage lasting up to 8 months.

I could probably write a book on this butterfly, but there are so many things not known about it and its habitats. 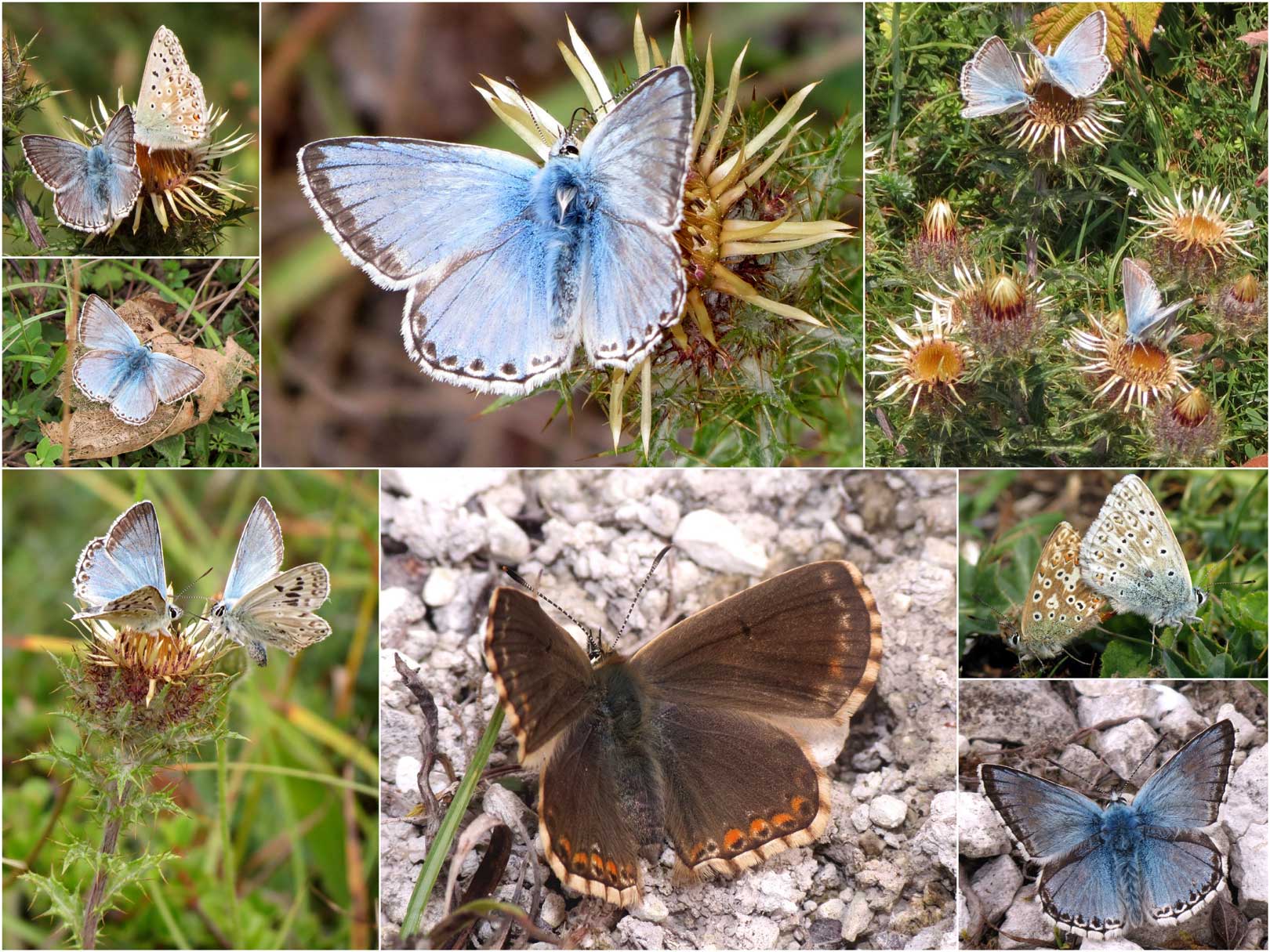 Chalkhill Blues are abundant only on the lower slopes of Mill Hill, where the top number this century was about 850 an acre in 2003 (count in 30 minutes) and the lowest in 2007 when the highest acre count was 96 in poor weather.
Vetch.html
These represent numbers on the hill at least 3000 (too many to count) and 275 (extremely poor).
This is not the full extent of the annual variations as in the 1990's there was thought to be at least 4000 on a few days.

Chalkhill Blues are also be found in small numbers (frequent) in patches on the Lancing Ring meadows (more will be found in a garden area patch of the Mill Hill Cutting), and occasionally seen on the pastures of Anchor Bottom, with a few on and around Southwick Hill, and one recorded on the Slonk Hill Cutting.

Summary: it is much more numerous but less widespread than the Adonis Blue. This is matched by historical records.

My conclusion is that the reason for the difference is that the habits and behaviour of the Chalkhill Blue Butterfly (possibly the egg laying habits of the female) mean that that populations only survive when there are dense mats of the prostrate form of Horseshoe Vetch. It is better if these are in large patches but the butterfly may persist in small patches.
This is aggravated by the failure of the females to colonise former areas nearby where the Horseshoe Vetch has recovered (e.g. the upper plateau of Mill Hill).

Although the Chalkhill Blue is found on Lancing Ring long sward wildlife meadows, it is not a butterfly that favours these areas, and survives despite the conditions unfavourable for Horseshoe Vetch. It is a butterfly of low fertility chalkhill, chalk pits, bare chalk etc. where it it reaches its maximum populations. These are not pastures, but areas of Horseshoe Vetch and other herbs. Where grasses occur or form a larger proportion of the site, the amount of Horseshoe Vetch and Chalkhill Blue Butterflies decrease in density.

The Chalkhill Blue has shown 98% reduction in numbers on the Shoreham Bank since records began in the 19th century. It has been almost wiped from abundant to occasional on the cattle pastures of Anchor Bottom. Cattle wipe out Horseshoe Vetch which is the danger. The other problems have been ploughing up of chalk hill and the current pressing problem of scrub incursion mostly Wild Privet.

In short, the Chalkhill Blue Butterfly, the once abundant and symbolic butterfly of the south downs is under threat and only survives in small pockets. It is not a compatible species with agriculture of any kind. On Mill Hill, it survives because the land contains little or no food value for livestock, too steep and not fertile enough for crops, and full up of over a dozen toxic plants.

On some pastures populations of Chalkhill Blues survive because the Horseshoe Vetch persists on steep exposed areas where the cattle do not urinate. Once eliminated, the Chalkhill Blue populations will not recover in a human lifetime.