Dogfish -  Smallspotted Catshark found around the UK:        by Len Nevell

The most common  and well known British shark is the dogfish (Scyliorhinus canicula), it is actually a member of the Catshark family (Family Scyliorhinadae), along with the Bullhuss or Nursehound (Scyliorhinus stellaris) and the Blackmouth dogfish (Galeus melastomus). 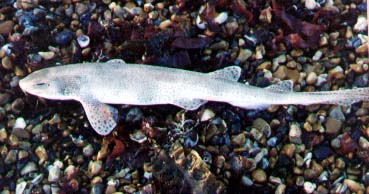 The dogfish lives and feeds on the seabed, in the shallow coastal waters, like most catsharks  it's nocturnal sleeping on the sandy seabed during the day and feeds mainly at night on a mixed diet of crustaceans and polychaete worms, plus young small round fish of the cod, bass etc. plus flatfish young that stay in shallow waters for protection and food until their big enough to move to deeper waters. They also scavenge and the odd squid or cuttlefish (cephalapod) is also taken.

The dogfish numbers are massive due to it's prolific breeding behaviour:- being oviparous and laying young in egg cases. Two eggs are laid every 5/6 days during the breeding season between November and July and after 5-11 months(according to water temperature) the young  hatch at 10cm (3.5 inches) long and able to feed straight away on dead or small prey items. Growing to 60-100 cm (2-3 feet) long.

In most southern areas as far east as Dover and western areas as far north as Scotland the dogfish is a pest and a prize to sea anglers, the young sharks eagerly take the bait during the day, but mainly at night time. During some angling matches the sharks are given a single point each because so many are caught, or top weight marks if few other species of fish are caught. The dogfish is caught nearly all year round mainly from the beach and also from boats.

My angling records show the dogfish is  more commonly caught in the Atlantic coastal areas than in the North Sea. This may be due to the warmer waters, or plenty of food from the very large number of Atlantic species of small and big fish that lay their eggs in the shallow waters during the spring and summer off the south and west coast of Britain and Ireland. The vast numbers of young fry will move into the shallow waters to feed and rough coastal terrain that would protect them, but not from the dogfish and it's larger cousin the Bullhuss (larger spotted dogfish which is restricted to certain .south western rocky areas of the UK). When large enough most fish can easily return to deeper waters of the Atlantic Ocean.

Commercially the dogfish is important for meat (Rock salmon), fishmeal and oil. Does not seem to be fished for in large numbers, or if so only in certain areas which does not seem to affect it's over all numbers, which seems to protects the species. 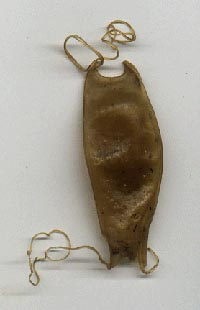 Anecdotal information from the time I kept dogfish and bullhuss in my large 3500 litre salt-water pond in my cellar at home in London for long periods until they were released.
Long periods of resting on the bottom was noticed during the day and took a fair bit of effort to wake them and only moving when food was introduced to the water. Would take food gently from my hand and my children's hand but only under supervision. Dogfish and bullhuss would swim around together and rest beside each other quite often. The dogfish would take large pieces of squid in it's mouth and not being able to swallow it all, would rest until it had eaten it all.
I've had no luck in rearing young dogfish from the egg case, but another society member Jim Hall has raised many young dogfish due to the available fresh sea water near his home in south Wales.
I have found that fresh sea water is more preferable to powdered salt water for the young of most species.

Early December produces plenty of Dogfish from:-  Scotland at Colvend, Balcary and Wigtownshire.  Llandudno in N.Wales,  S.Wales, Minehead in Someraset, Dover and Deal in Kent. Cornwall and Bexington in Dorset, plus Sussex.

Late December
Many locations last year the dogfish were caught in large numbers by anglers :-
Bexington beach in Dorset one angler caught 21 dogfish during a night fishing session just after Christmas.
Large number of dogfish have been caught in many locations off the West and North  coast of  Wales.
Plenty of dogfish around S.W.Scotland, Lee on Solent, Gosport, Devon, Dover,